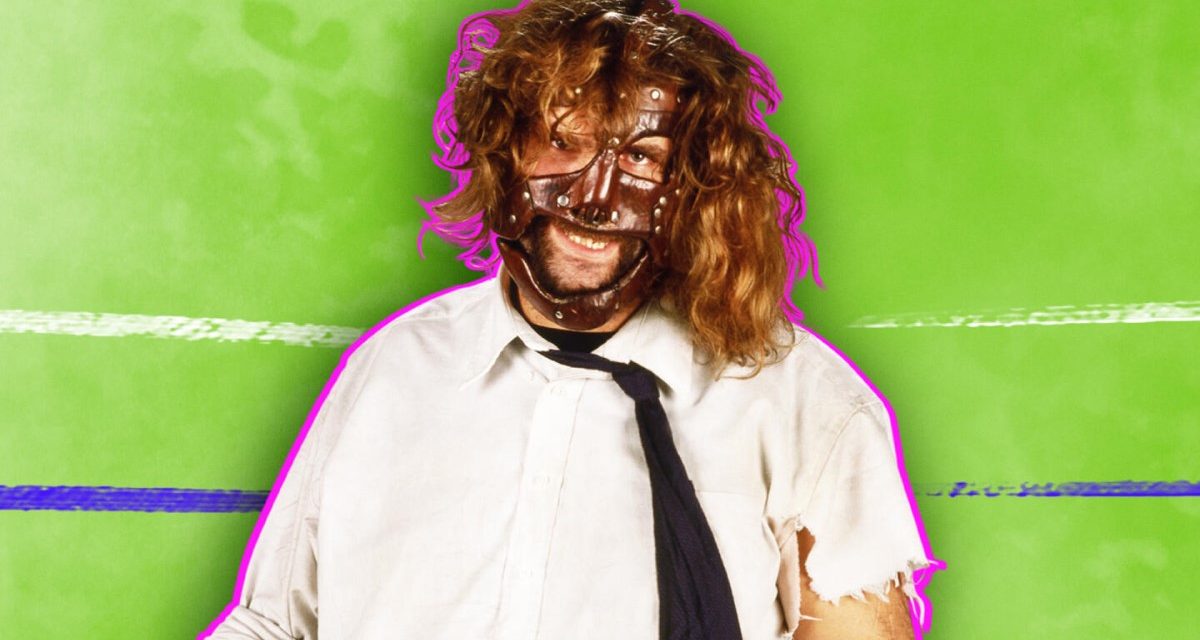 Of all the featured wrestlers in this series of Biography on A&E, Mick Foley’s story may be the best known to fans. His youth and his entry into wrestling were laid out, after all, in a famous string of interviews/promos with Jim Ross on Monday Night Raw in 1997. So, nothing against Foley, but with another big wrestling event available for fans to watch, I’ll bet “Double or Nothing” that this episode slips right under the radar.

We begin, of course, with an image of Foley, as Mankind, on his way towards his Hell in a Cell match with The Undertaker in 1998. I say “of course”, because no image defines Foley as much as his flying off the top of the cage. Then again, the stories behind that match have also been told several times over, so we’ll see if there’s anything new to come about that.

Foley looks back upon his childhood, which he describes as ideal, and a time when wrestling became something he could count on when it came to spending time with his father as they watched it routinely on Saturday nights. Some childhood friends, including actor/comedian Kevin James, remember him as goofy, quirky, but a sweet guy.

Foley recalls his trip to Madison Square Garden to see Jimmy Snuka leap off the top of the cage onto Don Muraco, which, not much later, inspired his own leap off of a rooftop onto a pair of mattresses – another famous image from the Foley library. The character of Dude Love makes his early apperances in home videos, and Foley says that it was the character he always wanted to debut as.

As he was working security for a charity wrestling event, it led to work on the ring crew which also granted him time to train in the ring before the events, being taught by Dominic DeNucci. After he gets into a few matches, and his name pops up in Dave Meltzer’s Wrestling Observer Newsletter, he finds himself working in Championship Wrestling Federation, and then World Class Championship Wrestling, making a name for himself as Cactis Jack Manson — with the “Manson” part added after a suggestion from Robert Fuller.

Foley makes an interesting point about how he was wrestling a style that was impervious to slow-mo study on VHS. He says it was impossible for people to find the secret of how his moves were done without it hurting — because it all hurt, and that was his big secret.

After a stint in WCW, which Foley describes as a try-out that had some good moments and some that were so-so, Foley was working an indie show when he met his future wife, Colette. Inspired by her belief in him that he could achieve great things in the ring, he worked his way back to WCW and a memorable run against Sting.

Ric Flair has a good amount of time expanding on his views that Foley was working as a stuntman and not as a wrestler, recalling that he would tell Foley to take it easy for shows that weren’t as important — such as, Flair says, the house show in Munich, Germany in 1994, where Foley lost his ear after getting tangled in the ropes.

Flair isn’t alone in his assessment of Foley, as Eric Bischoff, in voice-over, describes Foley’s style as a liability for the company. Foley, seeing a ceiling in WCW, leaves and heads to Japan to partake in a run of hardcore matches. The fame he gains by partaking in these matches brings him to Paul Heyman’s ECW, where he fits in like a glove.

The episode focuses on the promos Foley delivered in ECW, especially those in which he mocked the hardcore sensibilities of the Philadelphia crowd. This is what catches the attention of Bruce Prichard and Jim Ross at the then-WWF, who convince Vince McMahon, largely against his instincts and judgment, to bring Foley in as Mankind.

After a look at the feud with The Undertaker, we hear from Shawn Michaels of how it was a conversation between himself and Foley about Dude Love, that Bruce Prichard overheard, that led to the set of interviews with Jim Ross that really opened up Mick Foley to the world. A few people like The Undertaker, Shane McMahon, and Steve Austin look back fondly on Dude Love’s appearances.

We’re back to Hell in a Cell versus The Undertaker. Turns out there really isn’t anything new to tell here, beyond dutiful and reverential recollections about the match. Dewey and Noelle Foley get some time on camera, with Dewey remembering his favourite matches being the ones where his father was hurt the least, while Noelle says she’s blocked out most memories of watching him wrestle.

It’s not long after that Foley is dedicating his WWF Championship win on Monday Night Raw to those kids, but the show proceeds quickly to the “I Quit” match against The Rock, where Beyond the Mat was filming and Foley wanted his family in attendance to see him wrestle as champion. It was, famously, a horrifying experience for Colette, Dewey, and Noelle, captured by the documentary crew.

We dabble a bit in the history of Mr. Socko, but after his retirement, Mick and Colette have two more children, Mickey and Hughie, and Foley explores other experiences in life before returning to wrestling, such as working as a crisis counselor. He looks back fondly on his tag match with The Rock in 2004, his matches with Randy Orton, Edge, and a feud with Flair, but admits that any match he had after those were cash grabs.

His dalliances with stand-up comedy, one-man shows, and working as Santa Claus all-year round, bring Foley’s story to a close. These last few minutes of the show are actually the most interesting, which is a nice way to end on a high note, but also creates a bit of an artificial feeling of contentedness with the whole episode.

Mick Foley is a very interesting person, whose Biography episode was unfortunately too focused on a timeline-oriented structure that delivered his career in bullet points. Maybe he needed four short episodes instead, one for each face of Foley, or at least something that befits a man of his creative vision, rather than a rather humdrum survey of his career highlights.