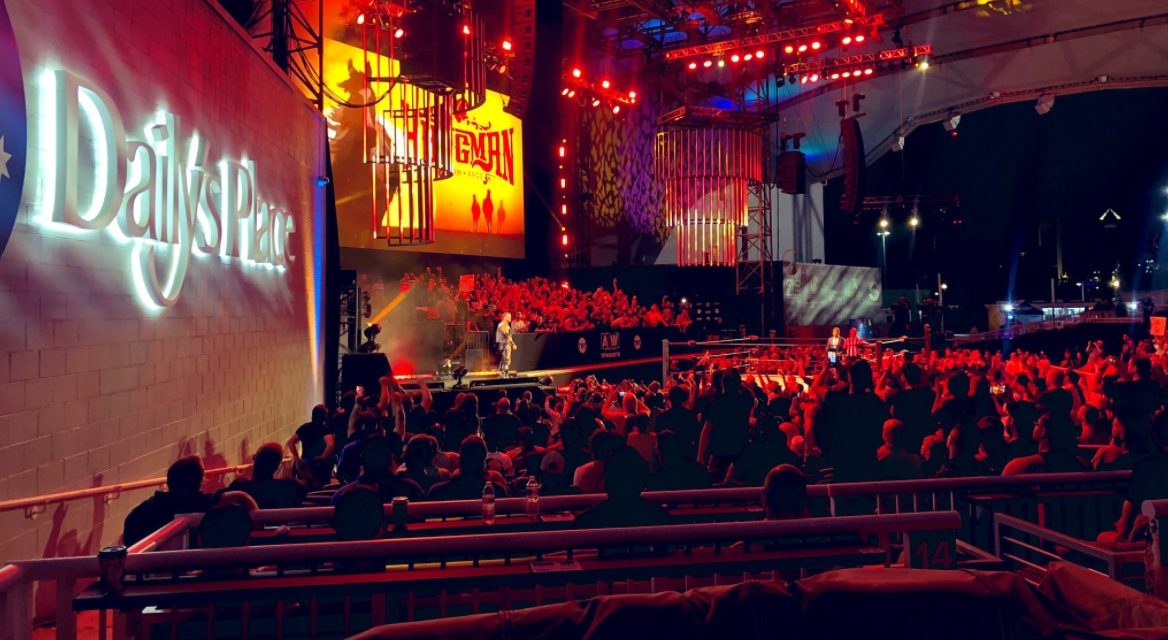 It’s Friday night, and you know what that means. Actually, it doesn’t typically mean AEW Dynamite, but the NBA Playoffs will not be denied, and claimed AEW’s usual Wednesday night slot. They’ve already claimed it for next week too, but we’ll worry about that after the holiday. For right now, this works perfectly, as Double or Nothing awaits on Sunday night. Let’s hurry over to TNT and light the fuse.

Bononi’s buddies calling themselves The Wingmen conjures up images of them backing him in a bar while he talks someone up. I’m thinking that’s not what they’re going for. Allin has his midsection taped up, the universal pro wrestling sign for “I just got beaten up in a tough loss or went through a violent gimmick match.” You know Darby is winning here to get himself back on track, which he does via the Coffin Drop.

After his victory, Allin calls for Scorpio Sky and Ethan Page to come out and fight them now, but Sky makes it clear they have no intention on battling them now for free. It’s a setup, of course, with the Wingmen attacking from behind and leaving Allin and Sting looking like easy prey, but the Dark Order rushes the ring en masse and saves them from any extended harm.

Paul Wight, who we’ve not seen much of on Dynamite since his debut so he can concentrate on co-hosting AEW’s Monday night show, comes to the ring for the weigh-in between Anthony Ogogo and Cody Rhodes. Ogogo should feel at ease coming from the world of boxing, as both men have sizable entourages with them. Rhodes strips down to boxer briefs and steps on the scale, coming in at 218 pounds. Will they measure Ogogo in Stone since he’s from the UK? That’d be funny. Alas, he tips the scales at 219 pounds, which for some reason makes QT Marshall feel like his man has a decided advantage at Double or Nothing. There’s no big brawl that follows, so we’ll have to wait two nights for these men to throw hands.

A variety of AEW personnel discuss the first Stadium Stampede match and what we might see in the sequel on Sunday night. I forgot that the Inner Circle has to disband if they lose. Real stakes! Backstage, Christian Cage and Powerhouse Hobbs brawl in a preview, one supposes, of them seeking each other out during the Casino Battle Royale.

AEW always plays up the “wins and losses matter” ethos, but it’s amusing when said wins come on the YouTube shows. For instance, Janela has apparently won four of his last five matches, but if all you watch is Dynamite, you’d never know that. Taz is not here for any discussion about how it’s great that Page has friends in the Dark Order, but for real, they’re answering my plea for faces to stick up for each other. Also, Page wins this one.

After running him down verbally during the bout, Taz takes his verbal barbs right to Hangman after the bell. He summons Brian Cage too, but even bloodied from his bout, Page is wary enough to know there’s an ambush coming. Hangman turns to the Machine and says he expected more, questioning whether he’s the type of guy who needs backup to whoop his ass. That bit of semi-reverse psychology works, as no one assaults Page and Cage vows he’ll get a one-on-one showdown on Sunday.

Tag team title challengers Eddie Kingston and Jon Moxley start talking, and then the TNT feed cuts to a commercial. Uh, that wasn’t supposed to happen. We get back to the promo after the commercial, as Mox claims he trusts Kingston with his life. Eddie thinks the Young Bucks will quit when the pressure gets too high. We’ll see in about 48 hours.

The next in-ring segment is supposed to be Orange Cassidy talking, but Pac comes out instead and declares the Freshly Squeezed one irrelevant. Pac is much more interested in Kenny Omega anyway, calling his title reign pathetic and challenging him to come out for a confrontation. Don Callis answers him on the big screen, trying to distract Pac for Omega to get in a cheap shot. It ends badly for the champ, though reinforcements arrive in the form of the Good Brothers. Rey Fenix and Penta chase the intruders from Impact Wrestling away, leaving Omega to try to get his beating in on Pac. Cassidy and the Best Friends interrupt, with Orange entering the ring to produce the contract Callis gave him to step aside from the title match. Omega opens it and finds the document in shreds, and Cassidy drops him with an Orange Punch. he goes to pick up the AEW championship but is stopped by Pac, who also ends up on the wrong end of an Orange Punch.

Earlier today, Tony Schiavone tries to interview Jade Cargill when they are halted in their tracks by Matt Hardy. Her actual manager shows up and threatens Big Money Matt with a 50-yard restraining order. Oh yeah, I forgot to mention who it actually is: Mark Sterling. And he only gets paid when she wins.

The idea here is that the 6-foot-1 King may give Cargill some problems, and she does last longer than you’d expect. But nothing is derailing Cargill right now.

Jake Roberts, please step aside, as Lance Archer wants to talk directly to Miro. He’s ready for a collision, for sure.

Poor Dante is getting fed to the sharks here, or rather just one big shark. And even though he’s the heel, there are some “Miro’s gonna kill you” chants going. Martin gets to deliver a decent amount of high-flying offense, so that’s something. Miro eventually grounds him and forces him to quickly submit.

Roberts wants to promo battle Miro, but the champ wants to rumble, and the Murderhawk Monster obliges. Pretty much every referee on the AEW payroll comes out to quickly stop them, but the actual match with these big men should be fun.

The longest reigning champion in AEW history, Hikaru Shida, is invited to the ring to celebrate her run as AEW Women’s World Champion. It’s fitting that she received a brand new, bigger looking belt. She gives props to the fans, but right on cue, Dr. Britt Baker, D.M.D. crashes the party. The No. 1 contender says she comes in peace, giving some semi-sincere credit to Shida and calling the last year Hikaru’s year. But Baker says she’s going to become more than just the face of the division when she beats Shida, but the face of a whole new era. And just like a previous era was all about 3:16, this one will be about D.M.D.

The announcer are talking about Miro for some reason, while I’m pondering how Uno and Grayson were all over Dynamite in the early days and now we rarely see them in tag team action. My son reminds me that Uno and Grayson dominated the tournament to decide the inaugural tag team champs, but lost in the final to Sky and SCU. Anyway, that’s ancient history now as they go down to defeat.

A bunch of Stings come to the ring to spook Page and Sky, one of which is the actual Sting. I want to be one of the fake Stings someday. Tony Khan, please holler at your boy.

After a rundown of the card for Double or Nothing, special guest emcee Eric Bischoff heads down the ramp. He mentions that nearly 25 years ago, he introduced the men that would eventually become one of the greatest factions in pro wrestling history, and on the very same network. Bischoff thinks the Inner Circle could one day equal or surpass them, and invites them to the ring. A video plays of some of the group’s highlights, which makes Santana muse, “wow, we’ve done some pretty cool s–t.” He gives credit to the fans and says if this is their last ride together, he wouldn’t have it any other way than alongside his brothers and in front of these fans. The other members get a chance to speak a little bit too. Chris Jericho says he was hesitant when asked to put together a faction because he doesn’t play well with others, but changed his mind when he saw this particular group of badasses. He tells his teammates he loves them, but the expected response from MJF comes from the big screen. He reveals that he has Dean Malenko captive, and when the Inner Circle runs to the Jags stadium to rescue him, The Pinnacle lies in wait. If only Admiral Akbar was here to yell his most famous line. Santana and Ortiz take dual piledrivers through tables from FTR, and MJF assembles his troops to reinforce his assertion that Sunday night will be the end of the Inner Circle. Enjoy Double or Nothing, and since Dynamite is once again on Friday next week, we’ll see you in seven!

It’s rare that anything of real consequence happens on the final show before a pay-per-view unless there are matches that aren’t set, and Double or Nothing has been pretty much sealed up for some time. That made tonight’s broadcast mostly a matter of treading water, but it still wasn’t horrible, and it reinforced all of the big storylines. Sunday’s card has a ton of potential, and it’ll be fun seeing if it can deliver in front of the first capacity crowd AEW has had in more than a year.