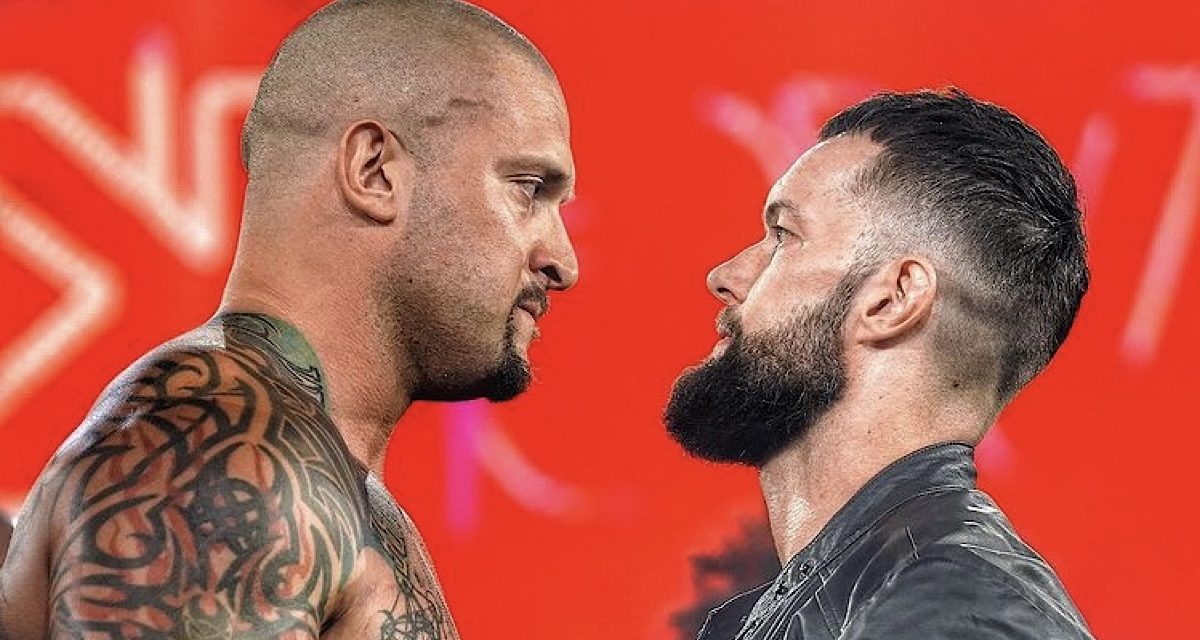 In an anticipated rematch from last month’s NXT TakeOver, the NXT Champion Karrion Kross and Finn Balor headlined tonight’s episode in a high-stakes encounter. For the challenger, it was triple or nothing, possibly nearing a change of scenery for “The Prince” of the black-and-gold brand. And for the champion, with pressures and standards looming above, he proved himself a main-event player in a bout arguably steps above the last.

The winners will be rewarded with a future NXT Women’s Tag Team Championship match, and both teams have held the gold before. The woman holding the division’s more meaningful belt though is the NXT Women’s Champion Gonzalez, who fends off the opposition before tagging in Kai. The latter falls to Blackheart’s comeback preceding commercial, and afterwards, Moon takes down the champion. The referee loses control of the action, at one point resulting in an innovative Eclipse on Gonzalez, and the double team finisher puts Kai away for three. But the victors’ celebration is cut short, as Kai and Gonzalez initiate the post-match beatdown in hopes of regaining esteem; for the supposedly dominant women’s champion, she took an unhealthy amount of bumps for the opposition in the — solid regardless — opening match.

Tommaso Ciampa and Timothy Thatcher respond to the Grizzled Young Veterans’ attack from last week. “Boys, there will be a round three,” says Ciampa before throwing a steel chair towards the back.

It’s Fish’s returning matchup since injury last fall, and things have definitely changed. For one, the Undisputed ERA is no longer, and Fish debuts a new entrance and get-up. The two competitors are notably skilled grapplers, but Dunne gains the upper hand. He’s “the best technical wrestler in NXT,” after all. Before commercial though, Fish comes back with strikes, opening up a cut below the eye. He hulks himself up through Dunne’s targeting of the injured tricep and delivers a flying knee for two. They reverse and counter one another’s armbar submissions before Dunne smoothly connects with the Bitter End for three. It isn’t Wednesday yet, but another post-match beatdown ensues as Lorcan adds injury to injury, ripping away at Fish’s bad tricep. Assuming he hasn’t actually reinjured himself again, this match proved that Fish’s tank isn’t empty quite yet.

Mercedes Martinez has words for the NXT Women’s Champion Raquel Gonzalez as she begins “the road back to the women’s title.” She might want to brake check as Boa of Tian Sha peers behind her.

Ramier of shooting-star press fame showcases more athletic ability, but she’s grounded and manhandled by Martinez. She delivers a string of suplexes and a spinebuster for two, and ultimately puts the opposition away with a knee strike and Air Raid Crash. The lights go out, and smoke fills the red-lit ring. But nothing comes of it, except the mark of Tian Sha has mysteriously appeared on Martinez’ hand. Between this and Retribution, it seems Martinez is always getting the short stick.

It’s the Million Dollar Faceoff! Cameron Grimes and Ted DiBiase finally meet face-to-face inside the ring, and the former questions the rivalry between himself and his hero: “I saw, because of you, that with money, I can treat people terribly and they would still like me.” DiBiase responds saying that he sees himself in Grimes, but admits that the latter needs to regain focus. But out comes LA Knight to introduce himself to DiBiase — and to showcase his great mic skills, offering a partnership. Grimes fights back with the crowd behind him, saying, “You get out of this ring, or I’m gonna kick your ass to the moon.” But Knight objects with a facebuster, and DiBiase cackles above him. Grimes would’ve been over the moon with full-capacity crowds, because those currently  in attendance love him.

Indi Hartwell is frantically searching for Dexter Lumis and interrupts “Ever-Rise Live”. Good guy Drake Maverick directs her towards Lumis’ room, which is plastered in broken heart drawings. Well… at least Ever-Rise gets some screen time.

Monet, the former Taya Valkyrie, makes her in-ring debut tonight, and according to commentary, she’s “modeling a 35,000 euro” entrance robe. With help from the Capitol Wrestling Center production of course, her entrance looks spectacular. She quickly connects with double-knees into the corner, but Jade fights back with a leg sweep. Monet recuperates with a powerbomb and facebuster to gain the pinfall victory.

Grizzled Young Veterans respond to Tommaso Ciampa and Timothy Thatcher, but they instead direct their attention to NXT Tag Team Champions MSK.

Alexander Wolfe’s beatdown from former stablemates Imperium was evidently his boot from both the faction and company. In a vignette, WALTER gives a speech to remaining members Fabian Aichner and Marcel Barthel.

The new North American Champion Bronson Reed enters the ring suited and smiling, and the strap definitely suits him. His celebratory promo is interrupted by Legado del Fantasma, who mock the champion with some four-ply tissues. Escobar, who is surprisingly a fantastic promo, evidently has sights set on the championship. NXT’s favorite sidekicks MSK make the save before LDF can attack.

General Manager William Regal declares a triple-threat match between Kyle O’Reilly, Pete Dunne, and Johnny Gargano set for next week. The winner faces the NXT Champion at NXT TakeOver: In Your House. Plus, MSK defends against LDF.

At this point in Balor’s prolific career, high-caliber matches from him always carry a “big fight” aura, especially considering that tonight may be his NXT farewell. Unlike his acclaimed matchups of the past year, the challenger immediately begins the quick striking game but returns to his signature mat wrestling during picture-in-picture. Kross works down the opposition, but Balor vehemently fights back with strikes to the ribs. The champion returns the favor to the lower spine and begins tossing Balor across the ring, but the latter utilizes the ring apron to capitalize before break. The intensity and roughness is enthralling, and it’s undoubtedly Kross’ best NXT showing yet. He sadistically powers over the challenger and catches a rear-naked before ramming him into the ringside barricade. Kross tries shaking off a comeback, but Balor connects with the corner dropkick; however, the champion avoids the Coup de Grace and delivers the Doomsday Saito. They trade clubbing blows, and Balor applies a submission to which Kross escapes from. Kross finally hits the running elbow and cinches the choke to retain!

Tonight’s main event between Kross and Balor was miles better than the original bout at NXT TakeOver in my opinion. The improved dynamics and storytelling made for an exciting watch in Kross’ best NXT showing to date. And hey, shoutout to Ted DiBiase for being involved in tonight’s interesting segment; big implications perhaps?