New feuds heat up at Road to Wrestle Grand Slam 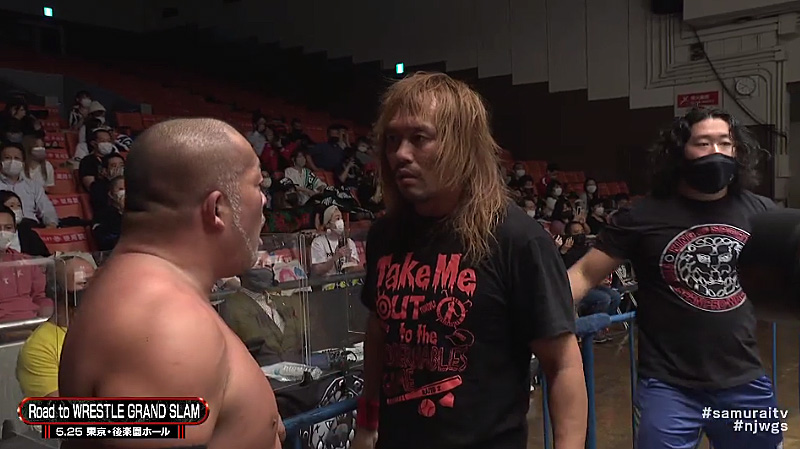 Night two of NJPW Road to Wrestle Grand Slam proved once again why Tetsuya Naito continues to be one of my favourites. Randy ‘Macho Man’ Savage remains at the very top of my list. I see a lot of Savage in Naito though. Like Savage, he is a little unrestrained and wild at times but it is just the little things, the little details that put Naito over the top.

Tonight, with the rest Los Ingobernables de Japon in the ring waiting for him, Naito’s music began but he is nowhere to be found. It plays and plays, on and on. Still, no Naito.

Red Shoes leaves the ring twice, walks down the entrance way throwing his hands in the air in frustration as he looks for Naito.

When Naito finally shows up he does so in his usual, casual, ‘I don’t give a crap’, ‘tranquilo’ way, sauntering out and signaling everyone to just relax and take it easy. There is no need to rush things.

Naito is announced but he isn’t in the ring just yet. He is taking his time. Naito walks over to Kimihiko Ozaki and asks him to repeat his intro but this time, when he is actually in the ring. Naito enters and is introduced once again. Naito gives the announcer a big thumbs up.

Ishii doesn’t wait for the introductions to be completed as he and his allies approach. He rushes into the ring attacking Naito. Naito and Ishii resume where they left off on night one. They blister each other with forearm smashes in the middle of the ring as the bell rings. Naito hits Ishii with a running forearm. Ishii barely blinks knocking Naito over with another forearm to the face and a standing, release powerbomb. A running lariat almost takes Naito’s head off and gets Ishii a two count.

Shingo runs into the ring stopping Ishii from slamming Naito. He and Ishii shove each other and get right in each other’s faces. Shingo and Ishii get into it. It takes Bushi, Sanada and Shingo to take Ishii down. To his credit, Ishii takes everything LIJ has to offer during the rest of the match but just keeps on coming at them.

Shingo ends things later with a Made in Japan on Taguchi. Naito and Ishii keep slugging it out on the floor. 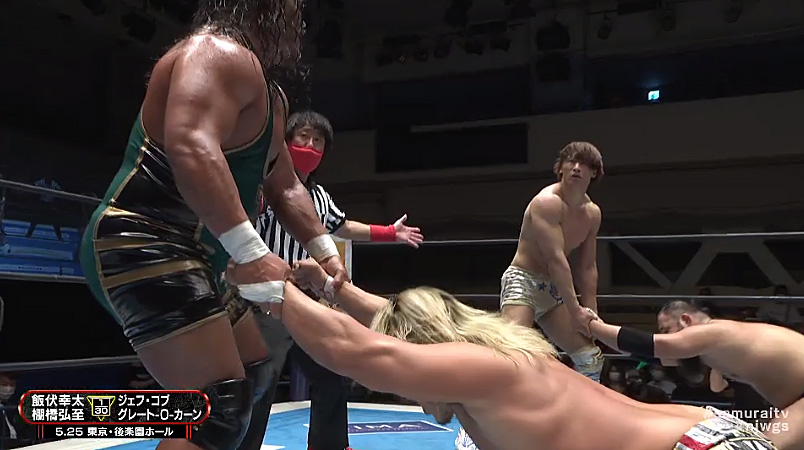 Cobb and Ibushi have the same idea. Courtesy: NJPW.

In the main event, Jeff Cobb continued to get on Kota Ibushi’s nerves by preparing to give Hiroshi Tanahashi a Kamigoye just as Ibushi was going to execute one on The Great-O-Khan in their tag team match. Tanahashi escapes forcing Cobb to watch as Ibushi puts away Khan with his Kamigoye. Cobb and Ibushi have another staredown.

Tsuji is ready to leave his Young Lion designation behind. He really has put in the work. He keeps things interesting against Owens but loses to a Package Piledriver.

Sabre Jr. makes another member of Bullet Club submit. This time it is Yujiro.

Wato makes a big mistake by diving over the top rope onto Loa. Loa catches him in the air, rams him into a steel post and slams him on the floor. After that, Wato gets bashed and beaten by The Guerrillas all around the ring. Wato finally makes the hot tag to Tenzan. He cleans house with his Mongolian Chops. Tama has to save Tanga before he taps out to the Anaconda Vice. As soon as he is tagged in again, Wato gets clobbered. He is eventually pinned with a Magic Killer.