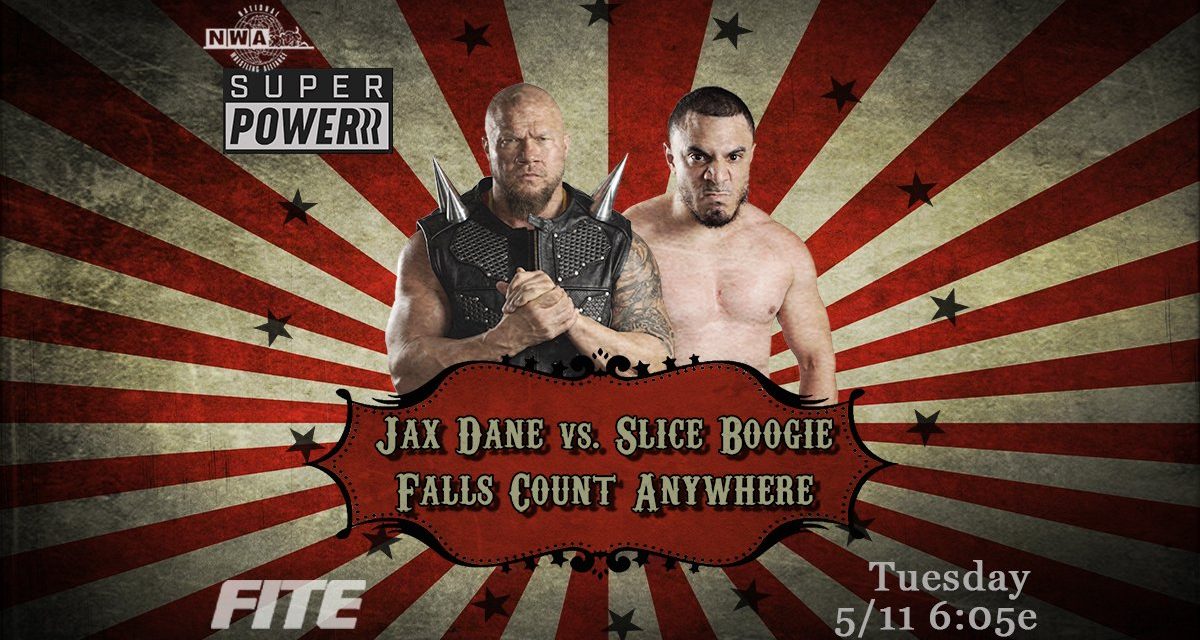 Are my recaps getting hotter than wrestling in the NWA?  It must be, because I just stepped Into The Fire for the SuperPOWERRR edition, and let’s see if the show is Snyder Cut superb, or as popular as Joss Whedon refereeing the NWA Women’s wrestling match.

We get a cold open from POWERRRSurge Episode 2 last week, with Joe Galli making the announcement of a 14 man battle royale (no current champs involved, like NWA National Champion Chris Adonis, NWA Television Champ Da Pope, and the NWA Tag Team champs Aron Stevens and Kratos) with a shot to challenge Nick Aldis.  “The National Treasure” was not happy by being blindsides by this news, and went to get answers.

We will hopefully get more answers tonight, as we go live from the GPB Studios in Atlanta, GA. Your commentators Kyle Davis(!) Tim Storm, and Velvet Sky are at the commentator’s booth, and they send it to Joe Galli, who’s with Strictly Business. 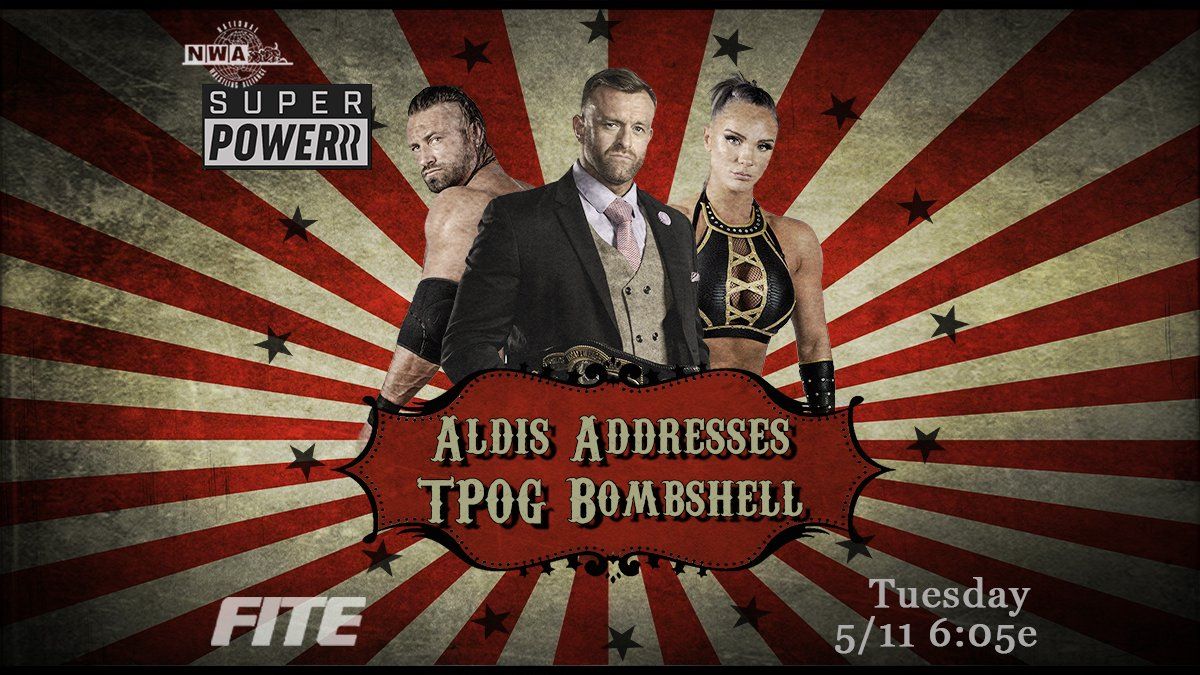 Galli, who is clearly the thinking man’s “Mean” Gene Okerlund, asks Nick Aldis about last week’s announcement.  Aldis has the best quote of the night:

“I tell you what…Billy Corgan seems to want to go to the Attitude Era, because he sure doesn’t want to live in the Gratitude Era!”

Aldis whinges on, with all he does for media appearances and being the face of the NWA, and having to deal with Galli and his mush mouth and May Valentine undressing him (second best quote of the night: “I’m not a piece of meat!”). Aldis addresses his Strictly Business teammates, and praises the meteoric rise of Chris Adonis and Thom Latimer’s work rate. Galli then goes to Kamille, and she’ll be announcing later tonight that for her number one contender’s shot on the line with Thunder Rosa, some stipulations she has, so…stay tuned. Aldis also mentions that tonight’s tag title match is off, and says “we have to think about the team”, much to Adonis and Latimer’s chagrin.

Looks like some doings are a-transpiring tonight, folks.  Let’s see if they follow through, but right now let’s get to your First Match, which is a … 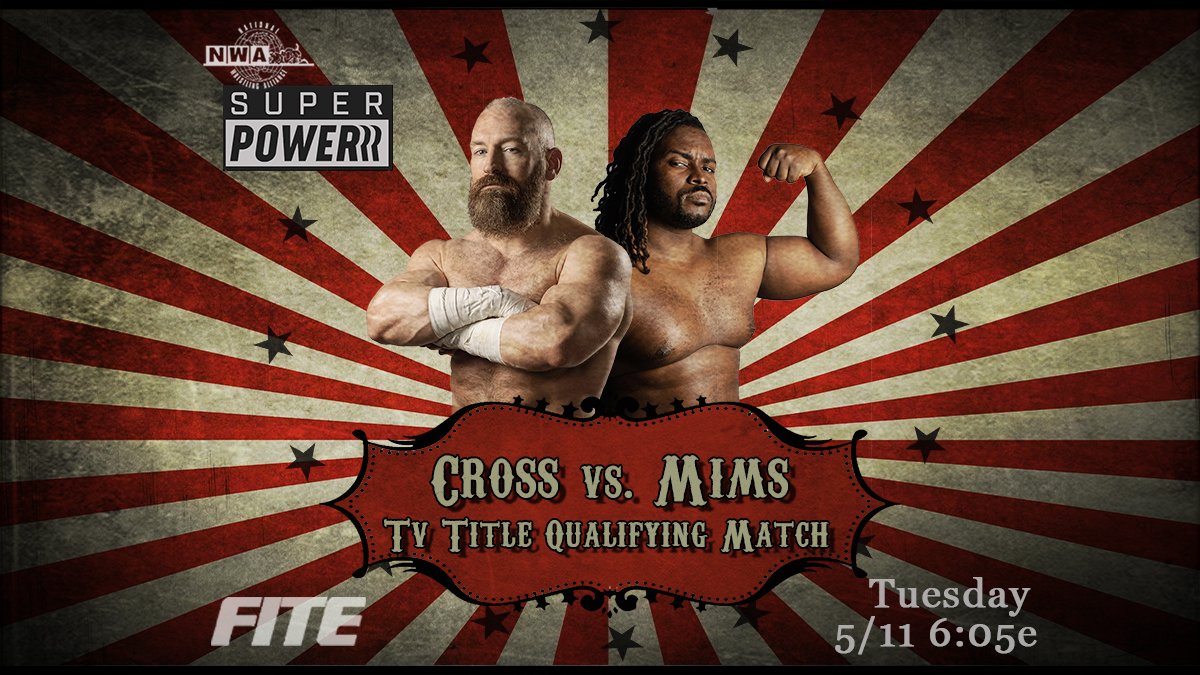 Second thought:  At least it wasn’t done by Vince McMahon on a whim, if you can catch my Riddle (*ahem*).

In any case, the match showcases Matt Cross quickness versus Mims’ displays of power early on.  Cross with clotheslines, but can’t knock Mims down to the mat. Cross with a big springboard crossbody gets a one count.  Matt goes up top again, but Mims trips up Cross on top turnbuckle, and goes for a powerbomb, but “M-Dogg” fights his way out.  It’s all for naught, as Mims gets a spinebuster to cross for a two count.  Mims sends Cross to the ropes, but Cross delivers a springboard cutter that gets him the three count.

Your Winner via Pinfall:  Matt Cross

We get teased for the Tag Title match, but after Aldis’ declaration, I kinda wonder.

Now making their way to The Podium are Austin Idol and Tyrus, and they want Da Pope. Pope obliges, and Pope says he is done with Idol talking behind his back, and wants Idol to say his peace to his face. Idol says he digs Pope’s style, but doesn’t like him ducking and keeping his Television title belt. Idol’s math suggest Pope is just four wins away from getting the “Lucky 7” to challenge for a World Title shot at Aldis, and wants to congratulate him. Idol offers his hand, but Pope ain’t having it and he walks away, with Idol acting like he’s the bigger man.

May Valentine is backstage with Aron Stevens on there not being a tag title match. Stevens wants to focus on the turning a new leaf, and holding up the tradition that the Tag belts represent.   May gets bold and addresses the Greek elephant in the room, asking about the turmoil in the group and how does he really feel.  Stevens replies with the next best line of the night, “Well you’ll need a couch and a couple degrees”, but acknowledges that he knows Kratos is a hired gun and a mercenary when he got him to get the tag belts, but thinks he needs to change his tactics. He hopes Kratos sees that, too.  If you believe that will happen, have I got a bridge in Brooklyn to sell to you?

Still get teasers of the tag title match.  Maybe it’ll happen?  I dunno.

Back to The Podium with Kyle Davis with Sal Rinauro, and he pleads with him not to take the rematch against Kratos tonight. Rinauro says he’s “Mr. Smiles”, and he’s living his dreams. But Kratos has disrespected him, and he wants to take this bully on by himself, and accept the consequences, and no help from anyone from the outside.  With those final words, he heads to the ring, as Davis announces the next match… 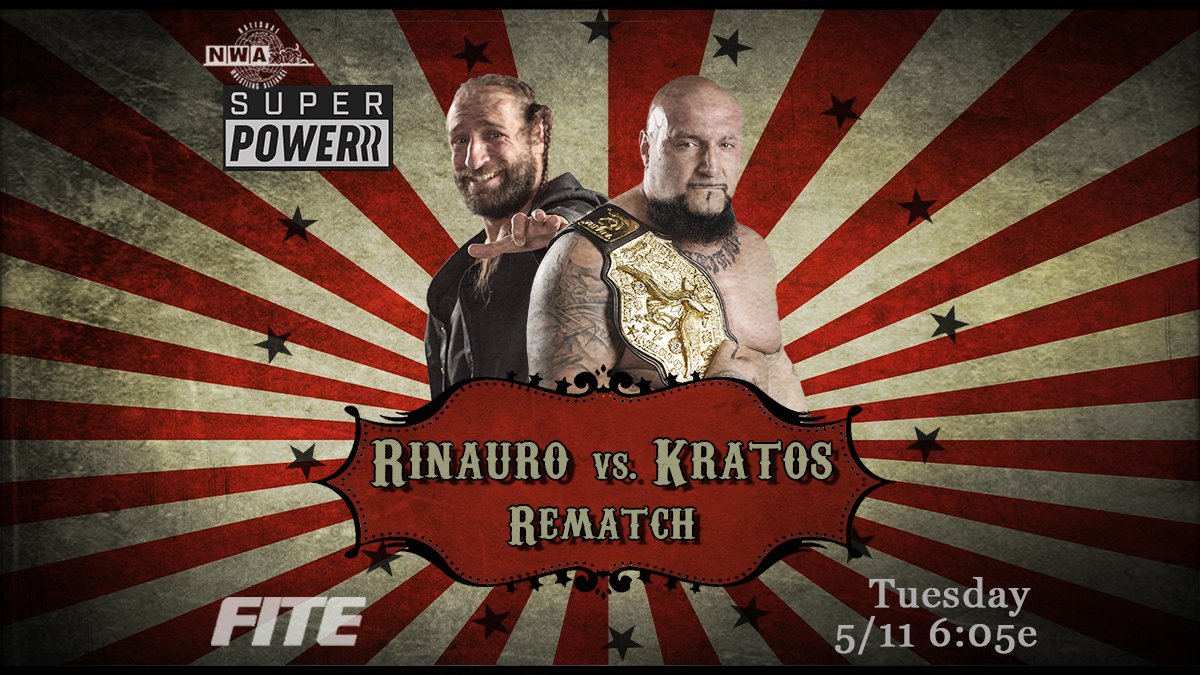 Normally, I would not recap a squash match, and will find a squash recipe instead (and really, you can find good recipe ideas on Pinterest.  Go check it out.  It’s not just for bored housewives, anymore), so I want to watch what happens next because I’m morbidly curious.

Simply put, this is a rematch, and a rehash, of the beating Kratos put on last week, as he goes back to the manhandling of “Mr. Smiles.”  Rinauro gets some hope spots in, and goes up top for a crossbody, but his head runs into a Kratos jumping knee that looks gut wrenching.  Rinauro is down, and Kratos pins for one two…and lifts his head up to stop the count.  Because…y’know, masochism.

So the beatings still continue a little longer, and Kratos with a wheelbarrow suplex and *now* he covers for the win. 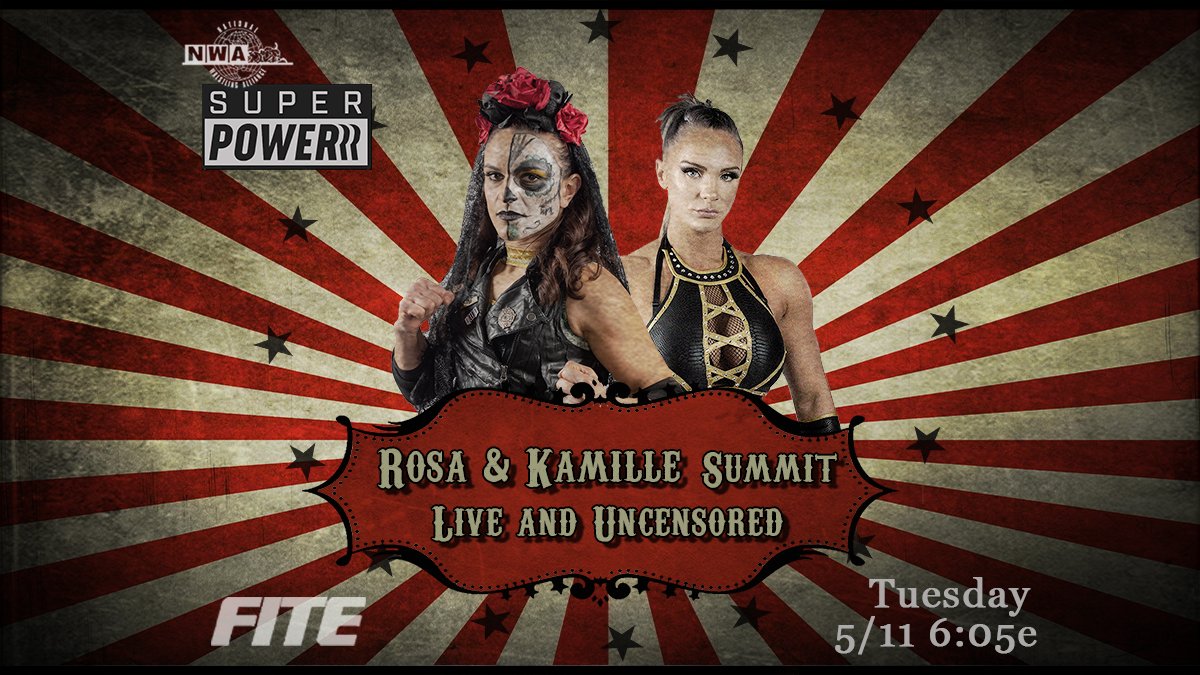 Back to The Podium and Kyle Davis with Thunder Rosa and Kamille with their respective advocates, Melina and Taryn Terrell.  Davis asks the women to behave (heh, good luck with that), as they conduct this summit to discuss the match with Kamille’s Number One Contender spot on the line for the NWA Women’s title.  Rosa wants to drop some knowledge, and I am going to transcribe this verbatim:

“You always make fun of me as being a women’s advocate for, especially here, in this business of women’s wrestling, and it is important I give you a lecture in the history of women’s wrestling.  Here in the NWA, we’ve been running this business for seventy years and a lot of women didn’t get the respect they deserve.  I’m going to start with Mildred Burke.  She started wrestling in carnivals against men.  It took her a long time to gain the respect, and even now she doesn’t get the respect that she deserved. And then, when they had women in the NWA, sometimes they couldn’t even appear on some of the shows because people didn’t like women’s wrestling.  And you… you have a great opportunity as the first contender for the championship.  It is huge.  When I was the NWA women’s champion, I took this very serious. I took it to the next level.  People understood that when you hold the title, that means respect.  That means honor, and that means that you are on the top of the top.  So, as a professional, I am asking you to really think about things, and do the right thing, because that’s what the NWA women’s world champion do all the time!”

Kamille considers that, and while She can’t help but notice while Rosa talks a big game with the NWA, she works in other promotions (*Cough* AEW*Cough*), but Kamille has been with the NWA from the beginning, and that is why for their rematch, there will be a couple stipulations.  First, it will be a 20 minute match.  Kamille also lays the second stipulation that when Rosa loses, she cannot work for any other company but the NWA, and she will be forced to have to watch as she takes the women’s title from Serena Deeb. Of course, Rosa sees that Kamille is threatened by her, just like everyone else, and she’ll make Kamille eat those words.

That, my friends, is a master class in cutting a promotion, courtesy of Thunder Rosa.  Seek this out, and subscribe to Fite.TV to see this and other great promos like this.  But now, let’s get to…

This is just smash mouth style wrestling from the time the bell rings, with each man throwing bombs.  Dane gets in control, and hits a clothesline that turns Boogie inside out.  Dane earns the “Godzilla” moniker, as he just *launches* Slice with a belly to belly overhead suplex with authority.  Boogie goes outside, and Dane give chase.  Boogie manages to gets back in control, but gets a one count for his trouble.  Back and forth on the outside, and Jax eats the Podium, while Slice continues to take the fight to Godzilla.

Slice chops at Jax Dane, and gets nothing. “Godzilla” chops back, Boogie (and you in the audience and watching the TV) feel that hand burn across the chest.  Jax follows with a suplex on the hard floor, with Boogie landing with a sickening thud, and it gets a two count for Dane.  Dane gives chase to Slice, and he catches Dane’s throat and guillotines him on the middle rope.  Dane drops to the outside floor, and Slice covers for a two count.  Now Slice steps up the violence, and gets a steel chair, sits Dane down.  Slice back up and rushes, but Dane stands up and knocks Slice down for a count of two.  Back to the brawling, Slice slams Dane face first to the steel steps, and kicks the steps to Dane’s legs for good measure.  But “Godzilla” ain’t done, and “King Kong” Boogie ain’t got s*** on him, as he picks up Boogie and rams him into the steel post.  But Slice shows he’s the King of the Concrete Jungle, and  attacks Dane with a running knee, and follows up with an *insane* leap over the top rope into an ugly-looking crossbody to Dane on the floor. But despite that high risk maneuver, Slice gets a two count. Slice goes back to the steel chairs, telling Dane, “You asked for this!”  At that moment, the curtain parts, and Dane’ tag partner, Crimson, comes out with a towel in his hand.  Slice fits the steel chair on the neck of Dane, and Crimson tries to throw towel, but Slice ain’t having it.  Crimson goes up top to the ring apron, and Dane gets the chair off and goes to splash Boogie.  Slice dodges the move, and Crimson gets blasted by his War King partner.  Dane is concerned, and goes outside to check on Crimson.  Ref tells him to get back in the ring, and Dane throws in the towel, literally.  Ref has no choice but to call the match.

As Slice crows about his win, Dane (along with a couple of refs) help Crimson to the back.  Meanwhile, we’re supposed to get the Tag Title match, and Galli is trying to get confirmation on his headset that…yep, it’s confirmed.  In douche-tastic fashion, Strictly Business left the building, so no tag title match.  So, sorry, sports fans.  Guess we won’t have the title match, as the show fades to the end credits.

If this show was SuperPOWERRR-ed, then the Kryptonite of the night was ending the show with an announcement of no title match.  Which is fine to do…if you’re a promotion that doesn’t know how to promote a tag division (*cough*WWE*cough*).

Otherwise, a solid show show with a solid final match with Jax Dane and Slice Boogie bringing the violence, and I want more.  the other thing that saved the show were the superb promos that leapt tall buildings in a single sentence.  Seriously, see this to see how promos can work too propel a story and upcoming angles/matches.

Until then, see you in seven, and subscribe to Fite.TV.