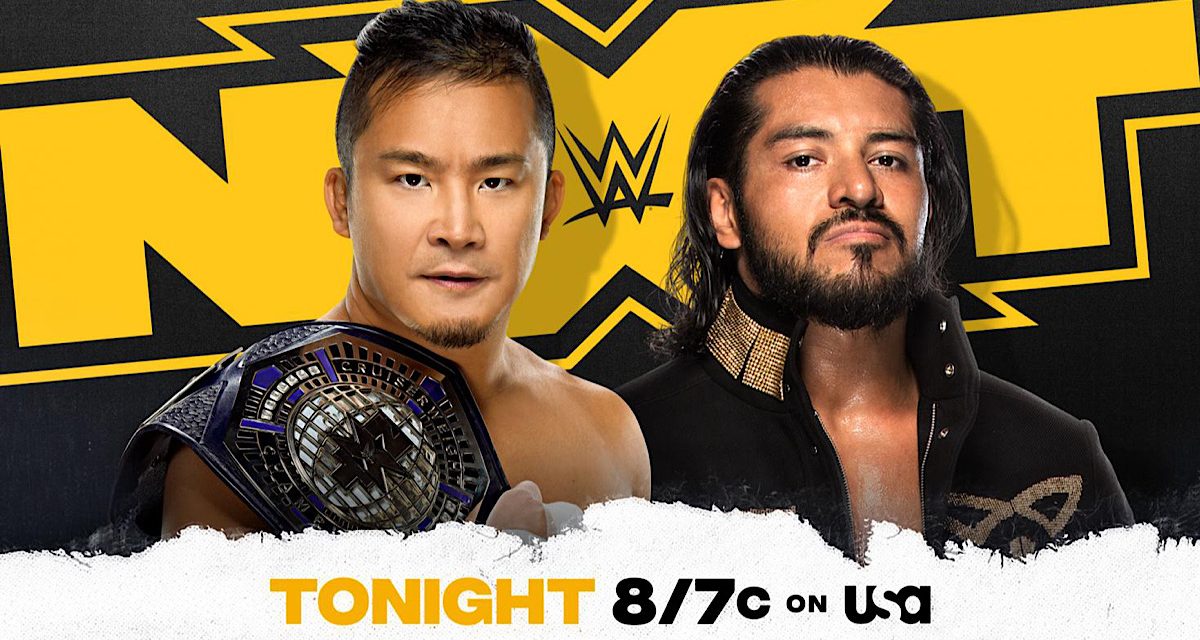 Announced earlier today on social media, NXT TakeOver: In Your House takes place on Sunday, June 13th. With a handful of weeks left before NXT’s next big event, tonight’s episode itself featured a pretty solid card; the majority of the black-and-gold brand’s major champions competed throughout the night with the headline bout being between NXT Cruiserweight Champion Kushida and challenger Santos Escobar.

On the outside, Theory and Gargano have some comical reactions to Kross’ big entrance — which, again, looks sweet inside the Capitol Wrestling Center. The NXT Champion has full control until Gargano provides a distraction, and Theory subsequently capitalizes with an eye-poke. He delivers a string of offense, but Kross vehemently pops up with two Saito suplexes and the finishing running forearm. Kross continues the beatdown with multiple forearm blows to the head, ultimately choking out Theory with a rear-naked. As The Way exits in defeat and Kross stands tall in-ring, Finn Balor appears behind the champ: “I don’t wait in lines. I want my rematch,” says Balor. The competitors clearly make a peaceful agreement for a championship rematch in the near future.

Footage from earlier today captures Leon Ruff’s plea to General Manager William Regal for a match tonight; he however declines due to Ruff’s injuries from last week. Even in a backstage office segment, Ruff always gives it his all.

MSK’s Wes Lee especially impresses with an athletic showing against Tyler Breeze. With Nash Carter and Fandango tagged in next, Breezango has some friendly fire in a drop-down exchange that somehow results in the referee leap-frogging over Breeze! The fans in attendance pop hard for stripes before commercial. “Breezango is all business now” following the break, but MSK makes the comeback shortly afterwards. All four competitors throw strikes with Breeze gaining the upper hand with two superkicks, but Carter pulls through with a moonsault to the outside. MSK connects with the assisted hangover finish for three. In a deserved show of respect, Breezango shakes hands with the victors after a pretty enjoyable bout.

Can somebody teach William Regal how to lock his office door? North American Champion Johnny Gargano storms in and airs his grievances over a scheduled championship defense against Bronson Reed next week. The dastardly and diabolical champion breaks one of Regal’s pencils before walking out.

Dunne is in-ring, claiming that he’s “the baddest man in NXT.” He dares anybody to step up, and from behind, a fired-up Leon Ruff attacks. The bell rings and Ruff continues the quick offense before Dunne connects with a great closeline. He punishes Ruff with joint-manipulation, but the latter keeps fighting back. Dunne however forearms the opposition in mid-air before giving a barrage of elbow strikes, resulting in a referee’s stoppage. It can’t be stressed enough how fantastic an underdog Ruff is. Referee’s attend to the downed competitor as Dunne snaps the finger out of spite presumably.

The competitors immediately begin brawling, and Gonzalez wins the exchange before picture-in-picture. The situation will hopefully start changing soon, but the piped-in crowd noise is especially obnoxious in the opening goings. Martinez eventually turns the tides and spears the champion on the apron, but Gonzalez powers through, ramming the opposition into the post. The women are equals here, and the exchange of maneuvers tells the story. The challenger connects with a big fisherman suplex and multiple knees, but Gonzalez delivers a boot and finishing powerbomb for three. It’s a scrappy but good showing for the champion, but the audio jeers are apparently not on her side.

A commotion is coming from the locker room, and the perpetrators are clearly Johnny Gargano and Austin Theory. Bronson Reed has been floored and shouts out, “Johnny’s a dead man!”

Isaiah “Swerve” Scott pulls up in the parking lot, accompanied by his new entourage. The visuals and demeanor alone promise a bright future for the group, and according to the titantron, they’re dubbed “Hit Row”. Scott lets his crew introduce themselves in a series of promos delivered as rap verses, which is… different. To their credit, the female member, B-FAB, evidently has actual experience in the rap game.

When an auction for a lakehouse mansion starts rolling on NXT programming, expect some Cameron Grimes shenanigans. He commences in a bidding war with arch nemesis Ted DiBiase, who purchases the estate for a whopping 20 million dollars… So, Grimes is better off anyhow, but a hilarious meltdown ensues. Grimes’ energy just doesn’t get old.

A video package highlights the rivalry between Zoey Stark and Toni Storm as they battle next week in a one-on-one matchup.

Earlier today, the competitors had a filmed verbal exchange in the parking lot which prompted this matchup. Their grappling abilities speak for themselves though as Lorcan takes control with additional help from Dunne ringside. After the break, which evidently masks the majority of this bout, O’Reilly makes the comeback and delivers the flying knee drop for three. Dunne and Lorcan attack the victor afterwards, but making the save is the returning Bobby Fish! Fish says, “I got my own scores to settle. I’ll see you when I see you.” Another layer to the Undisputed ERA split is cooking.

After winning the NXT Women’s Tag Team Championships last week, The Way showcases a literal, but campy, superhero video package. Bronson Reed doesn’t like superheroes — or specifically The Way — and announces that he’s been granted a Steel Cage match with Johnny Gargano for the North American Championship next week. This is assuredly Reed’s time, no?

Legado del Fantasma looks to be an early problem, but MSK evens the odds and forces an ejection before break. Escobar proves his dominance anyhow and keeps pressure on the champion with numerous strikes and stretches. Kushida eventually rolls through a top-rupe sunset flip and attempts the comeback, but Escobar catches him with the Phantom Driver to gain the first fall. In an interesting first, commentary then falsely sends for picture-in-picture as Kushida gets the now-surprising second fall with an armbar submission. The spot was either perfectly timed or mistimed as the actual picture-in-picture commences right after. Escobar connects with a bullet-like outside dive, but Kushida recuperates with a unique ‘rana maneuver. He continues to target the injured arm, and the competitors trade multiple near-fall attempts before taking each other out. The chemistry between the two cultures and styles is amazing, and ultimately, Kushida hits an arm-tied suplex to gain the third fall.

Kushida never fails to impress, and his innate skill will potentially carry the NXT Cruiserweight division to new heights.

For a show that’s usually filled with packages and segments, tonight had a stacked card. Each match was unique, and of course, the main event between Kushida and Escobar was an awesome TV bout. On a personal note, I’m really intrigued by “Swerve’s” new faction, Hit Row. They’ve got a great look, and hopefully the in-ring stuff lives up to the hype (crew).