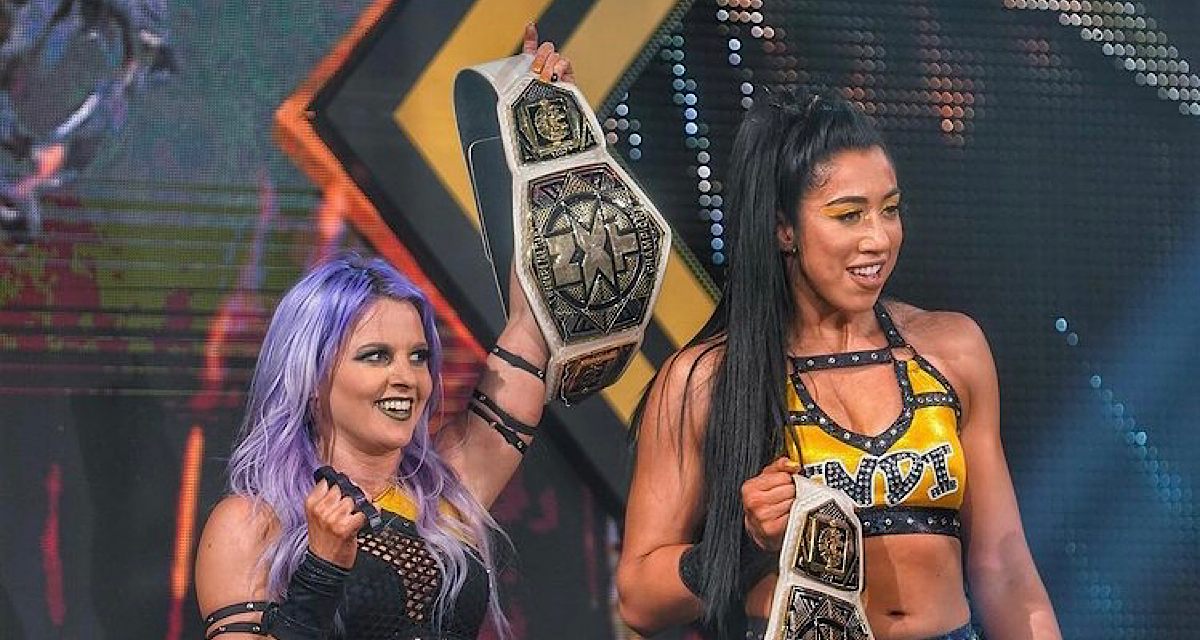 There are apparently a handful of different ways to express “no disqualifications”, and in this instance, the roulette chose Street Fight and Falls Count Anywhere. For further differentiation in the case of tonight, the former stipulation involved an abundance of weapons in what some would consider a “human demolition derby” for the NXT Women’s Tag Team Championships. The other bout skipped the furniture, focusing on a mental test of will between two persisting rivals and breakout competitors. And both matches delivered on chaos and a good time.

Ruff displays his underdog tenacity from the get-go, but Scott proves his dominance by ragdolling his opponent into the apron and barricade; Ruff’s great selling is a major asset. Scott connects with a massive superplex for two and suppresses the potential comeback before picture-in-picture. The competitors enter the backstage area and exit through the stage platform as Ruff utilizes the lighting system to blind the opposition. Subsequently, the underdog recuperates enough to hit a top-rope crucifix driver and reverse hurricanrana to the floor. But Scott reverses the next attack with an outside JML Driver, which Ruff valiantly kicks out of.

Ruff eventually hits two springboard cutters and climbs the hard-camera platform for a possible high-risk dive, but AJ Francis — a supposed member of Scott’s entourage — catches and slams him. Scott capitalizes with a JML Driver, standing victorious over his rival with a brand-new group behind him. Tonight’s opener was an undeniable breakout performance for both Scott and Ruff with eye-catching action and visible emotion. And clearly, the winner is going up from here.

North American Champion Johnny Gargano and Austin Theory barge into William Regal’s office. The general manager is having a meeting with Scarlett, who’s wearing a… revealing outfit. Saying out loud what everybody is thinking, Theory exclaims, “Those are the biggest nails I’ve ever seen!”

Hale, formerly known as EVOLVE’s Anthony Henry, is making his NXT debut tonight. He uses his quick speed and hard-hitting kicks, but Grimes returns the favor. Hale twists the opposition’s legs and connects with a top-rope dropkick, but Grimes ultimately gains the pinfall victory with the Cave In. For Hale, his debut matchup was a quick glance that probably should have received more minutes.

Kayden Carter and Kacy Catanzaro are done with Tian Sha — finally, and their intentions are subsequently set on NXT Women’s Tag Team Championship gold. Interrupting them is Frankie Monet who gives them some backhanded approval before exiting.

Cameron Grimes celebrates his victory backstage with Ever-Rise, who seem friendly enough. Grimes however, only has space for “me, myself, and Cameron Grimes” in the VIP room.

Beforehand, GYV cuts an in-ring promo — the usual shtick. Ciampa and Thatcher take control over both James Drake and Zack Gibson with some specialty mat-game wrestling and straightforward pummeling before commercial. The referee — the controversial one — argues over an illegal tag by GYV, which gives Drake the opportunity to capitalize. It’s ironic considering the ref’s actual views on rules and safety. Eventually, Ciampa makes a notably hot comeback and works together with Thatcher on Drake before the bout transitions into a four-man slugfest. On the outside, Ciampa secretly steals commentator Wade Barrett’s shoe and discreetly slides it to Thatcher who weaponizes it for the victory. “Shoes off if you hate Gibson” becomes the deciding factor for GYV’s defeat tonight.

Johnny Gargano and Austin Theory are back to bug William Regal. The general manager reassures that Bronson Reed is getting his title match to Gargano’s disapproval. Plus, at the request of Scarlett, Regal informs Theory that he’ll face the NXT Champion Karrion Kross next week. So much for Theory’s gentlemanship..

Isaiah “Swerve” Scott cackles in victory with his entourage surrounding him. This faction has potential for sure.

NXT Champion Karrion Kross’ entrance is still very, very cool. He boldly sends a violent message to opponent Austin Theory for next week before “Kool” Kyle O’Reilly interrupts; the juxtaposition between O’Reilly’s hipster attire and Kross’ formalwear is pretty amusing. It isn’t long before Pete Dunne interrupts, asking, “Are you two having a laugh?” And finally, the former NXT Champion Finn Balor returns with a punch to Kross. The standoffs become a four-way brawl as security tries and fails to sully the issue, because from behind, Theory and Johnny Gargano attack Kross. Gargano uses his North American title belt to knock down the bigger man, despite the latter looking like a monster in this great segment. The cherry on top? A slightly more serious side of Gargano and Theory who can evidently still be major players. During commercial, the duo brushes off McKenzie Mitchell’s interview question and drives off.

Segments before the bout, a video package highlights both competitors’ prior matches in NXT. This, and commentary, again puts over Ramier’s Shooting Star Press from last week. Sarray connects with a stiff running dropkick in the opening minute and takes control thereafter. For poor Ramier, the dropkicks keep coming until she inevitably makes the inefficient comeback. Sarray reverses the momentum with a spinning kick and half-nelson suplex for the three count.

Zayda Ramier is floored backstage, and Sarray comes to help. Toni Storm comes in hot, but rival Zoey Stark squares with her.

“Lemme talk to ya!” says Knight, delivering an entertaining set of lines as always. Atlas takes offense to Knight’s insults and attempts an outside dive, but the latter reverses with a shoulder block. Atlas connects with a German and delivers a quick flurry before Knight hits the finishing facebuster for three. While it could obviously be worse, Knight’s main-event potential needs to be recognized sooner rather than later.

Candice LeRae and Indi Hartwell are preparing for tonight’s matchup as Dexter Lumis peers through the window — the window of the women’s locker room to be exact. Meanwhile, LeRae tries hiding all of Hartwell’s presents.

Following a standout performance in last week’s main event, Legado del Fantasma are in-ring. Santos Escobar looks to regain the NXT Cruiserweight Championship while Joaquin Wilde and Raul Mendoza have sights set on tag team gold. The group looks like a million bucks, or rather, a million pesos perhaps. And on the screen, the NXT Cruiserweight Champion Kushida accepts the challenge for next week.

NXT Women’s Champion Raquel Gonzalez and Mercedes Martinez have a split-screen promo battle preceding their championship match. Martinez shows intensity while hitting great points, and Gonzalez holds her own too.

The NXT Women’s Tag Team Champions approach their tank with Frankie Monet’s little dog in it. Their expressions change when they spot — and smell — a small accident in the front seat. Like their usual promo style, their reactions are ingenuine. Well, there likely wasn’t anything there anyhow.

Cameron Grimes struts up to the VIP room bouncer. Unfortunately for him, the entire venue has been rented out by “The Million Dollar Man” Ted DiBiase. “That damn Ted DiBiase!” says Grimes once again.

The competitors don’t wait for championship introductions, and the tables, chairs, and garbage cans make an immediate appearance. The champions kick a garbage can over Indi Hartwell, and Candice LeRae gets con-can-toed with two lids. But Hartwell recuperates, taking out the opposition ringside and setting up a tower of chairs. Blackheart regains momentum and attempts to recreate the infamous suicide-dive spot into the structure, but she evidently learned from last time’s outcome; LeRae introduces a fire-extinguisher to halt the dive before picture-in-picture.

The entirety of the break is spent setting up furniture, which isn’t an exaggeration. Eventually, Blackheart sentons LeRae atop a ladder bridge while Hartwell bounces off a corner table — cue the line. Afterwards, LeRae moonsaults onto Blackheart into a ladder, and Hartwell delivers a spinebuster to Moon on the steel. Back outside, the announce desk is ripped apart by Hartwell, who ultimately gets smashed over the head with Wade Barrett’s mug. Capitalizing on the opportunity, Blackheart climbs the lighting rig and dives down and through the desk. Somehow, Hartwell recuperates and hits a springboard elbow on Moon through a table as LeRae hits Blackheart with brass knuckles in-ring. LeRae connects with Wicked Step Sister onto the steel chair for three!

The new NXT Women’s Tag Team Champions Candice LeRae and Indi Hartwell walk away, leaving a scene of carnage and debris behind them. As the saying goes, “that was a human demolition derby.”

Both the opening and closing matches were some enjoyable watches, and the programming in between was really solid. The NXT roster is super stacked, and the NXT Championship scene proceeding tonight promises lots of quality matches in the forthcoming weeks.