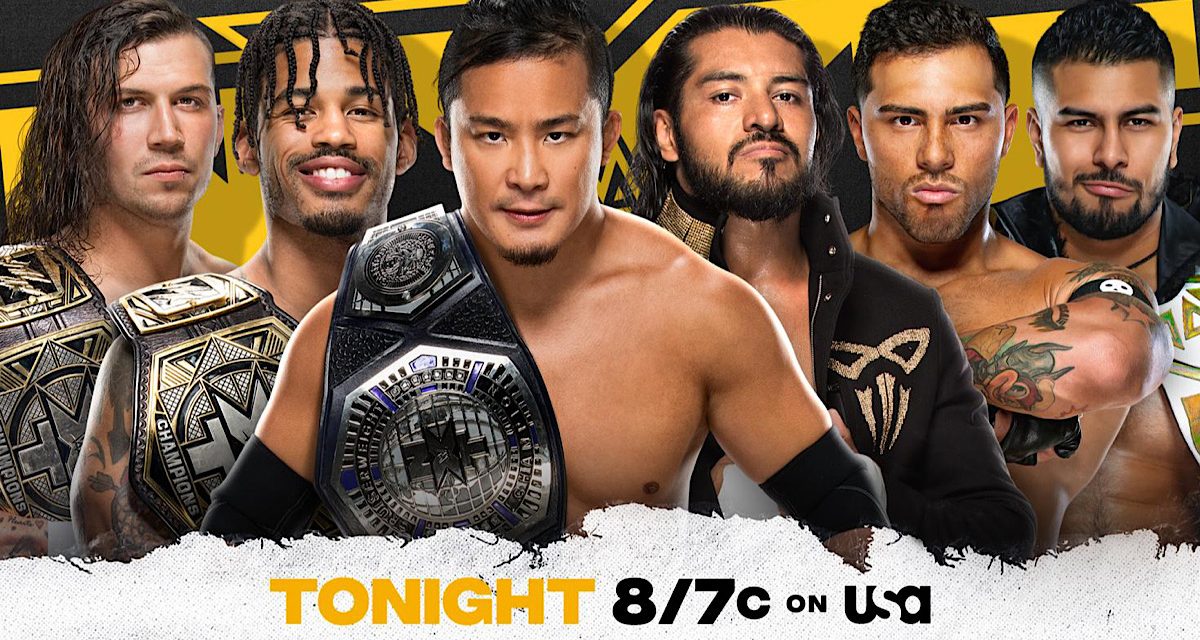 Some big-named absences opened up a main-event slot for tonight’s episode of NXT. Filling in the marquee, NXT Cruiserweight Champion Kushida and the NXT Tag Team Champions MSK battled against rivals Legado del Fantasma in a fun six-man tag. The trio of championship belts will evidently require some victories to obtain. But for Cameron Grimes, tonight he learned that “everybody’s got a price!”

Commentary continues to hit the “best women’s division in the world” line, which has merit for sure. The competitors trade offensive strings in the opening goings, albeit with slight timing mishaps, as Kai regains control preceding picture-in-picture. The NXT Women’s Champion Raquel Gonzalez watches on ringside as Kai toys with Martinez, but the latter makes a comeback shortly after. She squares with the champion and delivers a blow, which prompts Gonzalez to attack and crash the matchup. Gonzalez throws Martinez around the ringside area, sending a message to the potential challenger. Subsequently, tonight’s opener didn’t fully hit second gear before the no-contest ruling.

The NXT Women’s Tag Team Champions Shotzi Blackheart and Ember Moon are interviewed backstage when two bouquets of flowers are delivered. Franket Monet steps in and reveals the secret admirer to be… Dexter Lumis?

Footage from earlier today followed Cameron Grimes into a Florida jewelry store. “I was here to get the most expensive, shiniest, blingiest, most extravagant watch that was in this city,” says Grimes. “To be continued” flashes on-screen, but a mystery figure hiding behind an open newspaper may hint at a million-dollar revelation.

Suited and grizzled, the Grizzled Young Veterans cut an in-ring promo towards the NXT tag team roster. They are still “soon to be recognized” as NXT Tag Team Champions, but this promise has been running for quite some time. Out comes Tommaso Ciampa and Timothy Thatcher to interrupt as the latter attempts to revive the “shoes off if you hate (Zack) Gibson” chant from NXT UK. But it doesn’t last long before GYV is booted out the ring — and out their shoes too.

Drake Maverick and Killian Dain are still having trust issues, especially preceding their matchup against Imperium. Will Dain finally venture into Imperium and drop the baggage tonight?

In the studio, Isaiah “Swerve” Scott issues a challenge to rival Leon Ruff: a Falls Count Anywhere match set for next week. Scott says, “Since you wanna play this game Leon, I’m gonna continue to play. This time I’m playing with your life!” Scott and his grillz are grimey, and it’s actually a cool aesthetic.

Before the next matchup can finally begin, Storm has words for newcomer Zoey Stark. Storm charges after her opponent following the bell, throwing her across the ring and working her down. Ramier hesitates, but Storm redeems the exchange with a great German suplex. As she attempts to deliver an apparently dangerous top-rope maneuver though, Stark appears ringside, and Ramier capitalizes on the distraction. Ramier connects with a terrifying but effective Shooting Star Press for three! Major props for that feat considering Storm was a good distance away.

Santos Escobar and Legado del Fantasma send a message to their opponents MSK and Kushida. In an episode so far characterized by outnumbering segments and mid matches, tonight’s main event will expectedly shine.

The North American Champion Johnny Gargano, with Candice LeRae, eyes Reed backstage — perhaps awaiting his fate? If Reed is victorious tonight, he earns a title shot against Gargano. Meanwhile, Hartwell is pouting ringside over Dexter Lumis presumably as Theory gets manhandled by “The Colossal”. But the always-awesome rolling dropkick and outside interference gives Theory the upper hand before commercial. Reed attempts to fight back, showcasing that ideal mix of size and agility, but Lumis inevitably makes an appearance. Theory inadvertently crashes into Lumis, allowing Reed to capitalize and ultimately gain the three-count with the Tsunami Splash. Skimming over this ongoing love debacle, Reed is absolutely ready for championship gold.

Check out Kushida’s Twitter post — the heartfelt message about MSK and his duty to protect them in NXT. It will come into fruition tonight in six-man action against Legado del Fantasma. “M-S-Kushida,” says the Cruiserweight Champion in a backstage segment with his partners.

Johnny Gargano is browbeating Austin Theory over his defeat, but The Way turns the blame to Shotzi Blackheart and Ember Moon. Well, the dots don’t connect, but Candice LeRae likes the idea.

To quote Booker T, Imperium’s Fabian Aichner is “looking real jacked, baby!” However, Dain and Maverick take control over the opposition, and ringside distraction from Alexander Wolfe is needed to recuperate before commercial. Credit where credit is due, Maverick is the perfect ragdoll and fights back with quite the intensity. He’s blindsided and double-teamed until Dain rages and cleans house; but he’s ultimately taken down ringside by Marcel Barthel. Wolfe is instructed to deliver a chairshot but cannot commit onto his former partner, giving Maverick an opportunity to capitalize with a fiery dive. But the numbers overcome him once again as Imperium hits the double-team finish for three. The matchup here exceeded expectations, thanks to the dynamic between underdog Maverick and the smothering Imperium.

Pete Dunne, “the best technical wrestler in NXT”, surveys the landscape. A sense of direction for Dunne is currently unclear, unfortunately.

Back inside the jewelry store with Cameron Grimes, he’s finally picked his watch of choice. “But it’s not a million dollar watch,” says a voice from behind. It’s Ted DiBiase! His signature laugh echoes out the building as Grimes damns his new rival.

The following matchup is between The Robert Stone Brand and NXT Women’s Tag Team Champions Ember Moon and Shotzi Blackheart. Must-see, right? Once again though, some presents are offered ringside to the champions before Indi Hartwell and Candice LeRae attack from behind. They smash the fruit basket and donut box over their heads, and meanwhile, The Robert Stone Brand hilariously celebrates their “championship victory.” Instead of The Way as NXT’s weekly comedy troupe, how about utilizing The Robert Stone Brand — specifically Stone — again?

ESPN and Sports Illustrated’s Arash Markazi sits down with Adam Cole for an interview — the latter’s first appearance since TakeOver. Cole, as usual, exudes confidence while responding to topics such as Kyle O’Reilly’s singles run and NXT Champion Karrion Kross. Watching from a darkened room is O’Reilly himself, meaning this feud isn’t over quite yet.

A vignette showcasing some mixed-martial-arts training precedes the arrival of “Diamond Mine”, whoever he, she, or it might be.

Tonight’s main-event matchup personifies NXT’s Cruiserweight and Tag Team divisions, displaying some of its best rostermates of course, as the face tandem delivers some quick offense before picture-in-picture. Legado del Fantasma switches the momentum over Nash Carter for a prolonged amount of time until the inevitable hot-tag to Kushida is completed. The Cruiserweight Champion sweeps the floor and directs traffic as MSK double-dives ringside. But Santos Escobar captures Kushida ringside, subsequently powerbombing him through the announce desk and forcing in the medical personnel. Meanwhile, a valiant effort from Wes Lee keeps LDF subdued before his partners return. But as Kushida succumbs to the Phantom Driver, and Carter falls to a double-team finish, LDF secures the victory.

Tonight’s episode picked up during the latter half. As NXT rightfully claims the best women’s division in the world, the matches will consistently need to live up to that hype, which obviously isn’t an easy task. Expectedly though, the main event pulled through — and surprisingly so did the preceding tag match. Looking forward to next week, it will be interesting to hear what a returning Finn Balor has to say!