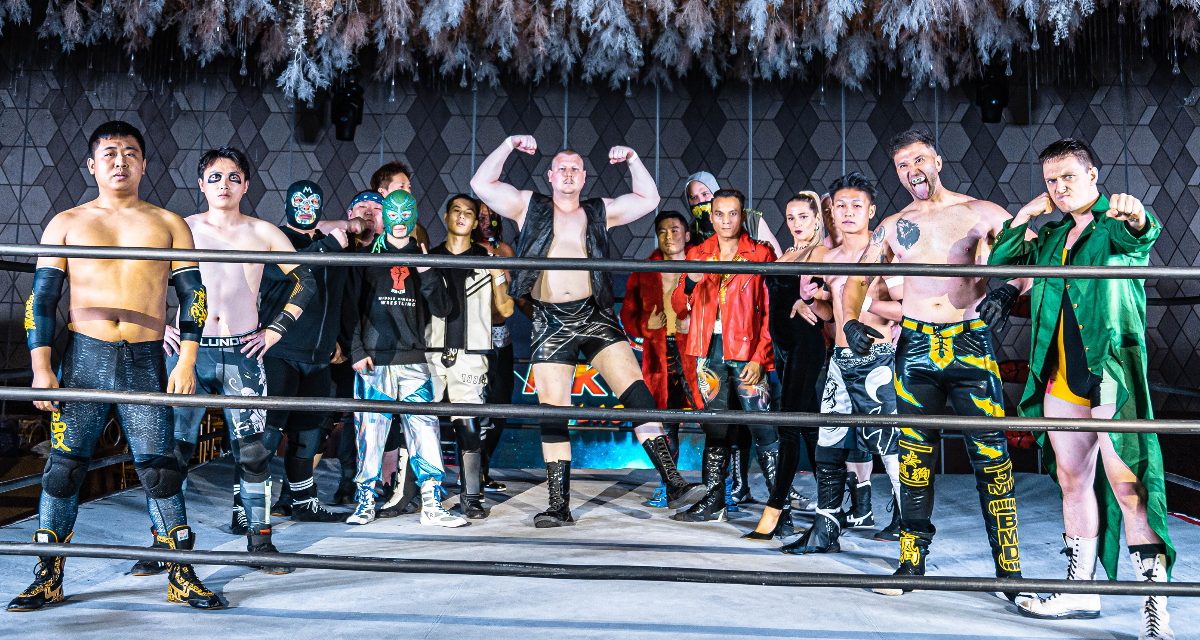 This season of MKW has a new look and feel. New commentator XiaoJieMen welcomes us. They’ve traded up the dingy cramped dive bar for an upscale event hall.

The belts are beautiful. Each features the face of a traditional Chinese dragon, emphasizing the “Pro wrestling with Chinese characteristics” objective of promoter Adrian Gomez.

Team 2: “Supreme Society”. Coldray is evidently the spry mouthpiece and partner Little Johnny the silent but deadly muscle. Little Johnny seems to be the giant of MKW.

Team 3: Lucha Mascaras Enter next. Poseidon and Plata Mascaras seem to be Chinese natives but with a lucha sensibility complete with masks. Style wise too I would surmise.

Team 4: “The Irish Whips” Rupert Holmes and Mad Dog Connor who is also the AIWF European Champion. These two stand out in many ways.

Team 5: “C2NY (China to New York)” Buffa and DC Chen. Buffa is jacked up both physically and figuratively. His happy go lucky hip hop attitude seems to have rubbed off on “protege” the more diminutive Chen as Chen attempts to shimmy a little on his way to the ring. Classic buddy comedy mismatch.

Team 6: “ATD” Saga and Herwin Cui. I love mismatched teams and we have another one here. Saga is shorter, wider and rounder while Herwin Cui is taller, quieter and more solid.

Team 7: “Team ESL” This teacher and student team is probably the most comedy oriented of the duos, with C2NY in a close second. Steve the ESL (English as a second language) Teacher is a domineering tutor to his student partner WangTao who Steve constantly lectures.

Team 8: “The Stable”. Manager Chairman Al seems to have negotiated his tried and true top team a sweet deal as all three members: Big Sam, Ash and Uncle Money are able to compete under “Freebird” rules in the tournament. Only Sam and Ash along with valet Queen Marie enter.

The teams pose for a group photo in the ring.

An all out battle royal of a brawl ensues between the opposing sides. Left standing in the ring are PK Mode, Lucha Mascaras and ATD. 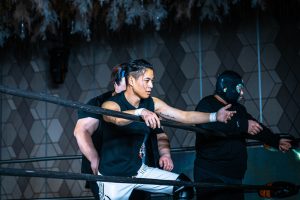 DC Chen seems puzzled with what just happened as he looks to the teams on the outside floor. (Photo: MKW)

Chen and Buffa get back in the ring. Buffa issues an impromptu 16 man tag challenge to those on the floor.

As the teams take their positions a plug for the MKW Training Center Is shown.

DC Chen and WangTao start off, followed by Poseidon and Coldray. Both duos start off similarly with international spots off the ropes.

Next are PK and Holmes. Holmes with a Billy Robinson-esque takedown. His loud mouth gets him walloped in the opposing corner. PK hits a monkey flip. They both tag.

Mamba sneaks under a line from Ash and clobbers the illegal Holmes. Mamba’s momentum is cut by a spinning heel kick from Ash resulting in the first cover of the match for two. 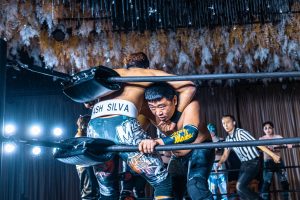 Mamba reverses into a corner sequence finally mid-rope reverse DDTing Ash. They are in the ropes and separated then both tag out.

Plata and Connor go chest to chest in the centre. They go chop for forearm respectively. Connor takes control to a corner with a boot then slams him back in the centre. Plata is dispatched quickly. Saga tags himself in. Saga offers a handshake to Connor but Connor tags out to Steve.

Steve patronizingly greets Saga and gets booted in the gut. An exchange powerful blows and techniques before tagging out.

Johnny and Cui, the tallest of their enter. Cui’s strikes are useless against the bigger Johnny. Johnny sends Cui to the ground then into his corner. Johnny clobbers a few illegal opponents in the opposite corner as he gains momentum to splash Cui.

Cui collapses into his corner tagging in Buffa, Johnny tags Sam. Both take turns showboating trade powerful offense. Buffa hits a double leg then an elbow for just a one, adds a fist drop for two. Sam clotheslines his way out for two. Buffa fires back with a forearm and second rope neckbreaker for the closest nearfall yet which Ash breaks up.

Buffa is pissed and punches the illegal opponents sending most to the floor. Sam sneaks up with a snake eyes and sidewalk slam for two. The heels keep control with quick tags.

Eventually Buffa evades a double team attempt by Sam and Johnny, tagging Chen who launches off the top with a crossbody on to multiple charging illegal opponents. Chen tags in Plata.

Plata’s shoulder block is shut down by one from Sam. Big boot then a gorilla press sends Chen outside onto Sam’s own team mates. 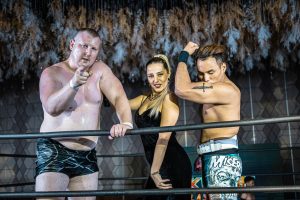 The Stable: Big Sam and Ash stand victorious with their valet Lady Marie.

Sam DDTs Plata and tags in Ash. Beautiful dropkick on Plata for 2. Finally Plata gets some offense with a reversal slam on Ash. Plata hits the ropes but Sam trips him. Ash with a leg drop. Illegal Sam picks up Plata and Ash launches off the ropes for the double team “Stableizer” finish. Sam holds Plata’s leg for unneeded insurance.

PK Mode vs Supreme Society and Poppy vs Nor “Phoenix” Diana which is a match from Malaysia’s APAC wrestling studio are advertised for next week.