Impact: Good battles in the ring and on the mic make for a strong final show before Rebellion 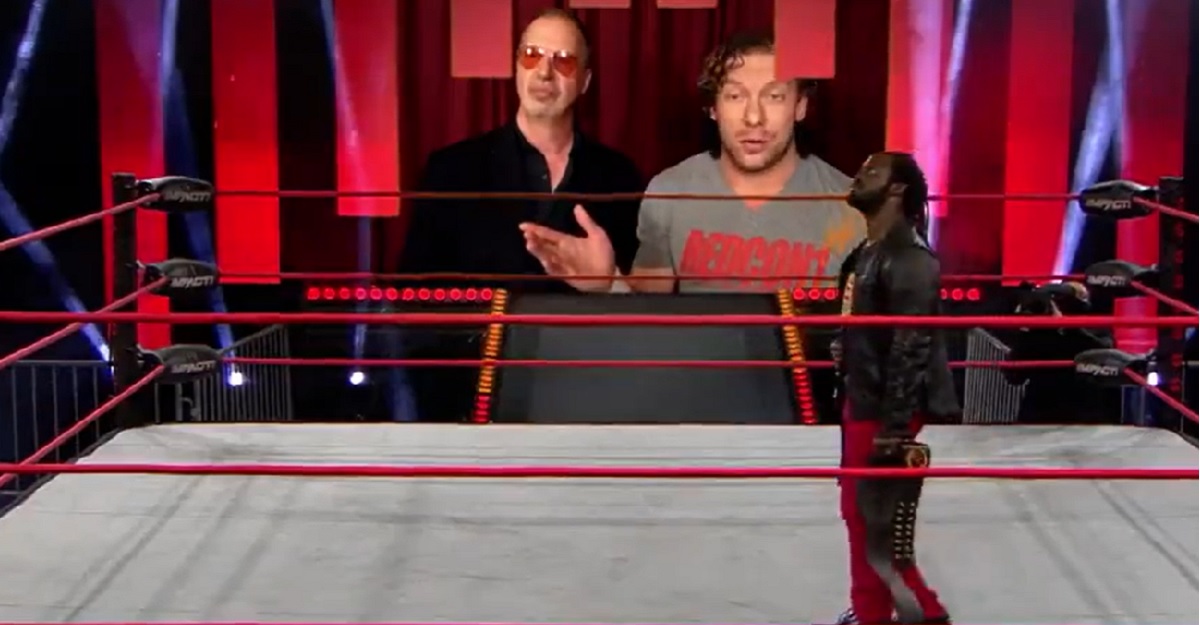 When Don Callis told AEW announcer that newly-crowed AEW World Champion Kenny Omega would be appearing on the following week’s episode of Impact, fantasy bookers dreamed about a title vs. title match between the two companies’ champions. And this Sunday night, that dream comes true, as Omega takes on Impact World Champion Rich Swann. The build for that match – and the rest of the Rebellion card – was front and centre on a strong and focused Impact on Thursday night.

On the Before the Impact pre-show, Petey Williams (w/ Josh Alexander) beat Mad Man Fulton (w/ Ace Austin) and Fallah Bahh (w/ TJP) in a Triple Threat match. Also, George Iceman said that many Impact personnel had seen “ghostly apparitions” and other paranormal activity going on in the Impact Zone.

Decay got the advantage early on, but the wily Good Brothers were able to use distractions effectively and after a walloping kick to Black Taurus’ head, he was trapped in their corner. But Taurus was able to run up the corner like the world’s biggest luchadore and he hit a nice Corkscrew Drive to escape and get the tag to Crazzy Steve.

Steve had Anderson in trouble, leading to Gallows making the save, and the match broke down after that. In the end, Gallows dumped Taurus hard to the floor, and then he and Anderson put Steve down with the Magic Killer to end things.

After the match, Anderson and Gallows took to the mic and sent a message to FinJuice. They said that FinJuice broke them out of their complacency, and that was a mistake, since now it meant the Good Brothers would have to beat them on Sunday to reclaim the Tag Team Championship.

This was a fine opening match. Taurus is really fun to watch and should probably get a singles run soon. But this was about giving the Good Brothers a win before their title match, so worked from that level.

Throughout the show, between segments, they showed clips of various members of the roster predicting who would win the Title vs. Title match between Rich Swann and Kenny Omega this Sunday.

Everyone – faces and heels – predicted Rich Swann, except for the Good Brothers who backed their buddy Omega.

For a couple of heels, these two started off very technically, with Tenille getting the better of things. But then Deonna interfered from the outside, giving Susan the advantage which she held through the commercial break. Susan got offended by Kaleb taking pictures of the match and she was so flustered that Tenille was able to take control, putting Susan down with a scary looking Double Underhook BrainBuster that looked like it could have killed Susan and ended the match.

But for some reason they continued. And some seconds later, Tenille won after a Middle Rope Neck Snap and a Dropkick.

After the match, Tenille got on the mic and challenged Deonna to come into the ring. Tenille trash-talked Deonna, who simply walked away.

The heel vs. heel dynamic is strange for Impact who normally stick to more traditional alignment battles. The match reflected that strangeness – it wasn’t great. And it didn’t help that Susan is not supposed to be strong in the ring in any event. They also lost the chance to end it after a brutal and gross looking move, but they went on and so the actual finish paled in comparison.

Brian Myers cut a promo backstage, saying that he grows and evolves, while Matt Cardona is still living on his past YouTube glory. Myers said he’d beat Cardona on Sunday. Myers’ eye is recovered now, if you care.

In a hacker video promo, Sami Callihan said he would cripple Trey Miguel in their Last Man Standing match this Sunday.

This was just a big ol’ hoss fight. Shera battered Jake around for quite some time, with Raju throwing in the occasional cheap shot from the floor when he could. Jake eventually fought back, but more shenanigans by Raju distracted him, leaving him prone for the Shera Bomb.

This was short but fun.

In his training school, Trey’s trainer was telling a fired-up Trey that he didn’t have to prove it to anyone, least of all Sami Callihan, that he had passion. They showed a Trey training montage like in an 80s action movie, but with worse music. The West Texas Rednecks were right: rap is crap.

Impact World Champion Rich Swann came to the ring. He was fired up over the events of last week’s press conference when Kenny Omega cheap-shot slapped him. He challenged Omega to come to the ring to fight. Instead, Omega and Don Callis appeared on the big screen. As usual, Callis was tremendous and Kenny was not. #SingSongyWhining

"It is yet another step in the career of @KennyOmegamanX toward world takeover."

The @AEW World Champion had these final words for @GottaGetSwann ahead of Rebellion THIS SUNDAY. @TheDonCallis pic.twitter.com/8Qy22kJJ56

After they left the screen, the lights went out – and Moose’s music hit.

Moose slowly stalked to the ring. When he got in, he told Swann that he wasn’t there to fight him, but rather congratulate him for beating him in their title unification match. He told Swann that beating Omega should be no problem for him since he’s already beaten Moose, who is bigger, better, and more skilled than Omega. He warned Swann not to lose the Impact title to Omega, or else Moose was going to make him pay.

Swann told Moose that he was going to beat Omega. And after that, he’d pin Moose again. 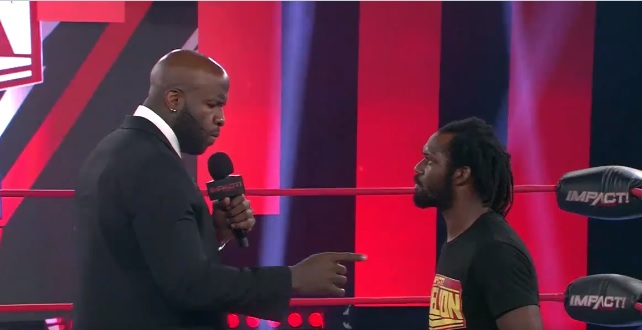 Another Taylor Wilde video teaser aired, this one with clips from her first run with the company. She will be returning to the Impact Zone soon.

Jordynne just dominated Hogan from the start, using her strength to batter her around the ring. After a couple of minutes of dominating Hogan, Jordynne hit a Muscle Buster.

Steelz ran in to break up the pin, and the ref called for the disqualification.

After the match, Fire N Flava put the boots to Grace until Rachel Ellering hit the ring for the save. She and Grace beat down the champs who hastily retreated. Grace told them that Ellering would be her partner at Rebellion for the Knockouts Tag Team Championship match.

This was a good showcase for Grace, and a fine way to introduce Ellering into the mix

The Flashback Moment of the Week was from Rebellion 2020 when Chris Bey won a Four-Way match over Rohit Raju, Trey Miguel, and Suicide.

Impact Tag Team Champions FinJuice cut a video promo from Japan. They said that the Good Brothers were dreaming if they thought they’d recapture the gold. This was pretty good.

Next up was a video package showing the entire history leading to Sunday’s Title vs. Title match. Then Matt Striker and D-Lo Brown ran down the full Rebellion card.

Eddie was able to out-shine Young in the early moments, using a combination of technical and power moves, keeping Young grounded in the centre of the ring and away from the ropes where VBD were lurking. But Eric eventually broke free, crotching Edwards on the top rope and then hog-tying Eddie’s leg between the top and middle strand.

Young then took the fight to the floor where he aggressively attacked, trying to position Edwards where VBD could take some cheap shots, but Eddie’s buddies walked over to deter them. Young then started to pick apart Eddie, targeting his pain points with hard shots. Young went up top with bad intentions, but Eddie caught him, and brought EY down the hard way via a Bob Orton Superplex.

They exchanged shots, duking it out in the middle of the ring, and  each looking to land the killing blow, like a Death Valley Driver by EY and a Tiger Bomb by Edwards.

.@TheEricYoung catches @TheEddieEdwards coming out of the corner and nails a Death Valley Driver. #IMPACTonAXSTV pic.twitter.com/O8urJLlOlM

After that latter move, EY rolled to the floor, only to get hit with a big dive by Edwards. EY rolled back into the ring and grabbed the referee, faking an injury. As the ref tended to EY, VBD attacked Eddie on the floor, leading to a brawl between the factions on the outside. Eddie went back in the ring, but then got rolled up by the sneaky Young and pinned.

After the match, the brawl continued both in and around the ring. As they fought, Striker and D-Lo did one final push for Sunday’s PPV to end the show.

This was really good. EY and Eddie had some good matches earlier in the year, and this one continued the trend. It was curious that they gave EY a clean small package win – going into their tag match on Sunday, one would have thought a tainted victory would make more sense for the heels. But otherwise, the match was very strong, and the brawl helped the build for Sunday.

This was a strong “go-home” show leading to this Sunday’s pay-per-view.  In particular, the promotion of the Title vs. Title match was excellent, from the video packages, the roster prediction clips, and even the Moose segment. Every other match got its due as well. A very good final stretch before Sunday.