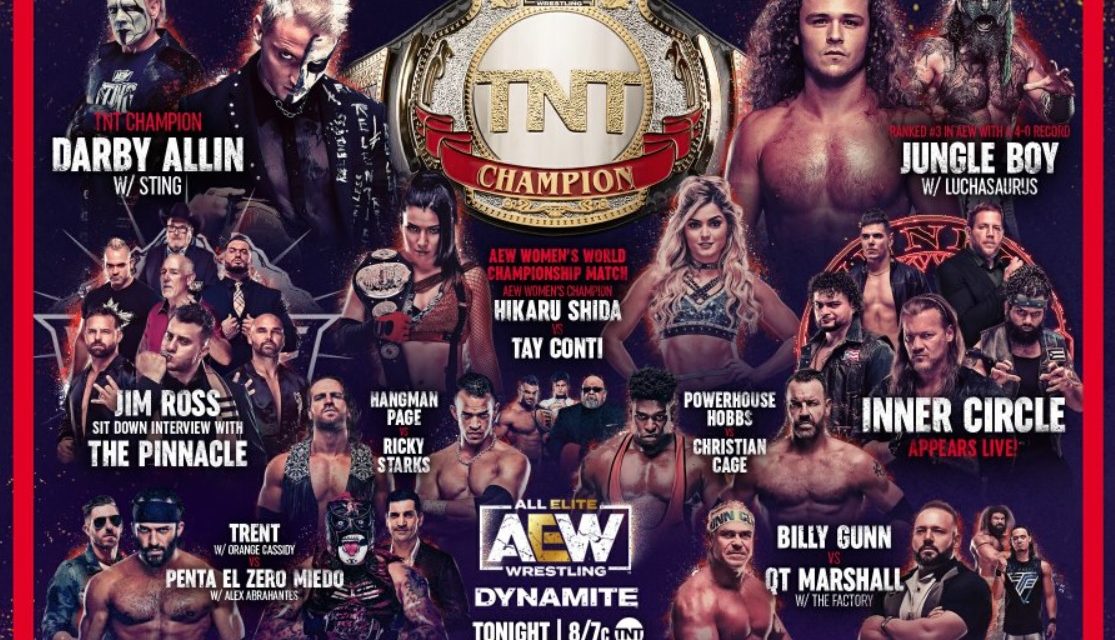 It snowed today in a bunch of different parts of the U.S. Happily, Jacksonville was not one of them, because, you know, AEW wrestles outside. Or semi-outside, anyway. But there’s no fear of snow except during Sting’s inevitable entrance during AEW Dynamite, so let’s head once again to Daily’s Place to take in the spectacle.

As he is wont to do, Taz makes himself comfortable at the announce table. Both of these wrestlers are in the midst of long winning streaks in singles matches, so part of me wonders if we could see a time limit draw. It’s not something we’ve seen too often in AEW, but it has happened. The near falls are piling up now too. Alas, the end comes suddenly, and in somewhat surprising fashion as Page uses a somewhat improvised submission hold to get Starks to tap out. Didn’t see that coming, nor did Page expect Hook to attack him from behind. Brian Cage joins the fray as well, but the Dark Order spills into the ring en masse to save Page’s bacon. Probably whiskey-soaked bacon, but still.

It’s rare that I get too psyched about announcers turned managers these days, but there’s something extremely amusing about the way Abrahantes starts his “Penta says … ” translations and attacks his promos with such gusto. At the end of the day, it’s all about entertainment, and he puts a smile on my face. Wow, he even gets to deliver a message in the middle of the match, telling Trent that his friends and his mom sucks. Cassidy tries to teach him a lesson, but Penta gives him a superkick, Abrahantes sneaks in a shot from his microphone, and Penta says “I just got the three count” after a package piledriver. OK, not really, but he does win, and Abrahantes got to help out.

It’s time for a time-honored tradition, the sitdown interview with The Pinnacle, courtesy of Jim Ross. It’s notable that Wardlow gets to talk, and even does a nice job taunting Chris Jericho. We all know MJF can cut a great promo, and he goes off into one here as well.

Let’s hear from both competitors in the women’s title match, shall we? Tay Conti says she is a little nervous but has been working harder than anyone knows for this opportunity. Hikaru Shida says her challenger is pretty and has fighting spirit, but neither will be enough to take the belt.

My son correctly notes that it feels like Shida has had the women’s belt for 1,000 days, but the announcers bring up another good point: She’s been an entirely pandemic-era champion. Could AEW just let her remain on top until she’s able to defend it in front of a full crowd? Or is that still too far away? Certainly, Conti has been given a big push leading up to this matchup, but that can be said about several other challengers on Shida’s resume as well. Conti takes a nasty bump off the top turnbuckle before falling out to the floor, yet she recovers and is soon back on the offensive. She hits the TayKO but only for two. A backbreaker leads to a super stiff knee shot to the face to allow Shida to retain.

Right after the bell, Dr. Britt Baker comes out on stage and points to the big screen to show she’s now ranked No. 1 in the division. There’s someone I can see finally dethroning Shida.

Has Miro clamed down since last week? No, no he has not. “What champion do I beat first?” he asks. Darned if I know, big fella.

Sing along, everyone, as the Inner Circle heads to the ring for their interview with Tony Schiavone. They’re definitely the faces in their feud with the Pinnacle, with Jericho playing to the crowd. Just like with the Pinnacle segment, we get to hear from someone who doesn’t always get a lot of mic time: Santana, in this case. Jericho sings a little song about MJF and reminds all of us that he gave Friedman a swirlie. Next week, Jericho promises there will be a parley between the two groups. Not a parlay, which is something that would make my colleague Dale Plummer’s ears perk up.

Guys, Billy Gunn is undefeated in The Year of Our Lord two-thousand twenty-one. What a time to be alive. Also, that’s putting in a lot of time on AEW Dark. He really should have brought his sons with him though, because Marshall has backup, and in case you haven’t been watching recently or have the audio muted, one of them is an Olympic boxing champion. Sure enough, a sneaky punch from Anthony Ogogo helps Marshall get the victory.

One person who isn’t cool with Marshall’s behavior of late is former partner Dustin Rhodes, who attacks QT with a bullrope but then gets

With personal cameraman Brandon Cutler filming, Don Callis and the Elite have their promo time in their trailer. They seem very unconcerned about the return of Jon Moxley and Eddie Kingston, but when it’s time for Kenny Omega to speak, a continuously honking car horn throws him off his game. In case you had any doubt, it’s Mox and Eddie in a pickup truck. They ram the trailer but discover the Elite is not home.

Honest question: Can you outwork someone who has like 100 more pounds of muscle than you? Asking for a friend … named Christian. This match is given a nice time, not too long but enough to let both men get in some nice work. Christian eventually prevails after hitting the Killswitch, and Starks limps down to check on his fallen teammate while staring holes in Christian.

Jade Cargill claims every manager in AEW is looking to sign her, and it seems she may be right as Matt Hardy and Vickie Guerrero both express their interest. They better make a hell of a deal, Cargill says.

Jungle Boy was chosen by the fans to get this title shot, and he is destined for solo gold at some point. Just not today, probably. Sting and Luchasaurus are both on hand to watch over their respective friends from the floor, though since both are faces they don’t figure to get physically involved. Allin takes his usual share of big bumps, but Jungle Boy does as well, not the least of which is a Coffin Drop from top turnbuckle to apron. Luchasaurus helps Jungle Boy back to his feet to beat the referee’s 10-count, which Sting does not like. They do battle on the stage and eventually back through the tunnel. Jungle Boy hits a brainbuster and a running elbow and transitions to the Snare Trap after Allin kicks out. Allin reaches the ropes, so Jungle Boy uses a rolling surfboard to set up the Snare Trap again, forcing Allin to rake the eyes to escape. We’re getting close to the top of the hour now, so it’s no shock to see Allin hit the Last Supper and get the pinfall. Great match to end tonight’s show.

There’s no time to celebrate for the champ, as Scorpio Sky and Ethan Page assault both wrestlers. Lance Archer runs down to fight them, and when they hit him with a double low blow, Sting returns, bat in hand, to scare off Sky and Page. There’s a tag team match in here somewhere, possibly next week, but we’re out of time for tonight. See you in seven!

Tonight’s show was carried by the opener and the two title matches, which were all good to great. The rest was alright, just not quite as good as last week. There are a lot of promising buildups going on at once, including Moxley and Kingston vs. The Elite, Britt Baker and Hikaru Shida, and of course the Inner Circle-Pinnacle feud. If AEW can have them all peak at the same time, we should be in for some fantastic stuff over the next few months.