MLW Fusion #127: Muertes needs to Hammer down his Openweight title 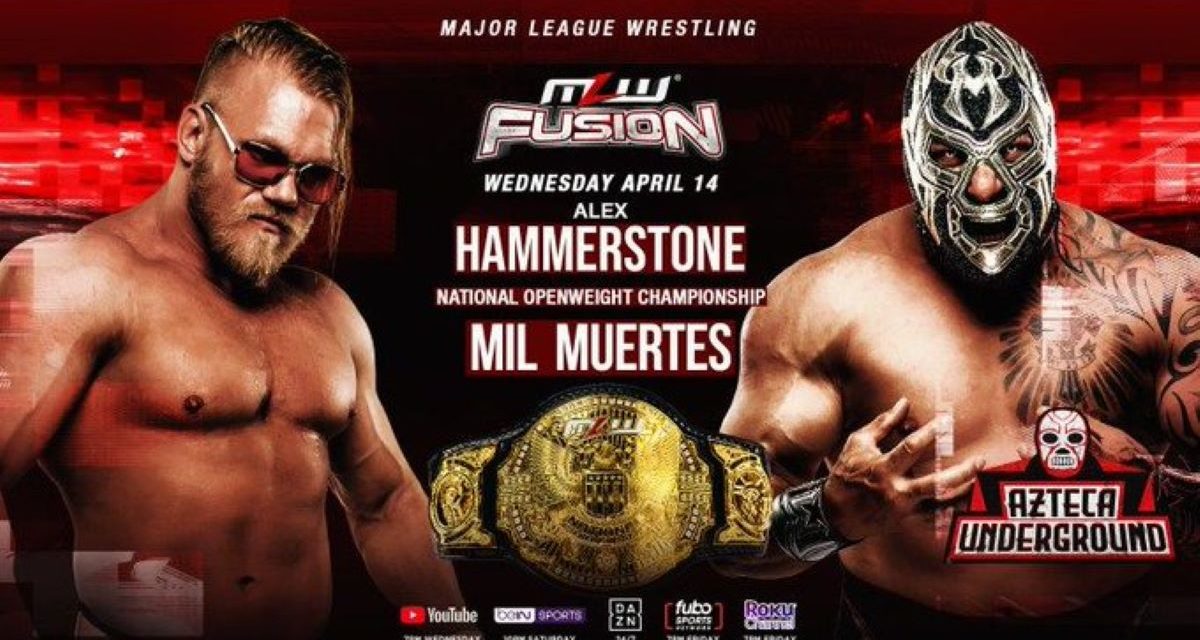 Can the Man of 1000 deaths take on the Master of Muscle Mountain for the MLW Openweight championship?  That is the big question leading up to the main event for the night, and this and other championship matches offer a taste to the fans of what’s to come on the latest episode since Never Say Never 2021.  Nevertheless, we are live from the GILT Nightclub in Orlando, FL. Your commentators Ray Flores and fight analyst St. Laurent have the call.

Cameras catch Salina de la Renta bragging about the next steps to take the gold. The Azteca Underground Associate Douchenozzle (trademark) comes into the picture, and shoves the camera man out of the way.  However we hear the A.U.A.D. ask de la Renta is she had cleared the plans with El Jefe in the background, and de La Renta is saying she knows what she’s doing.

But let’s go to the First Match of the evening… 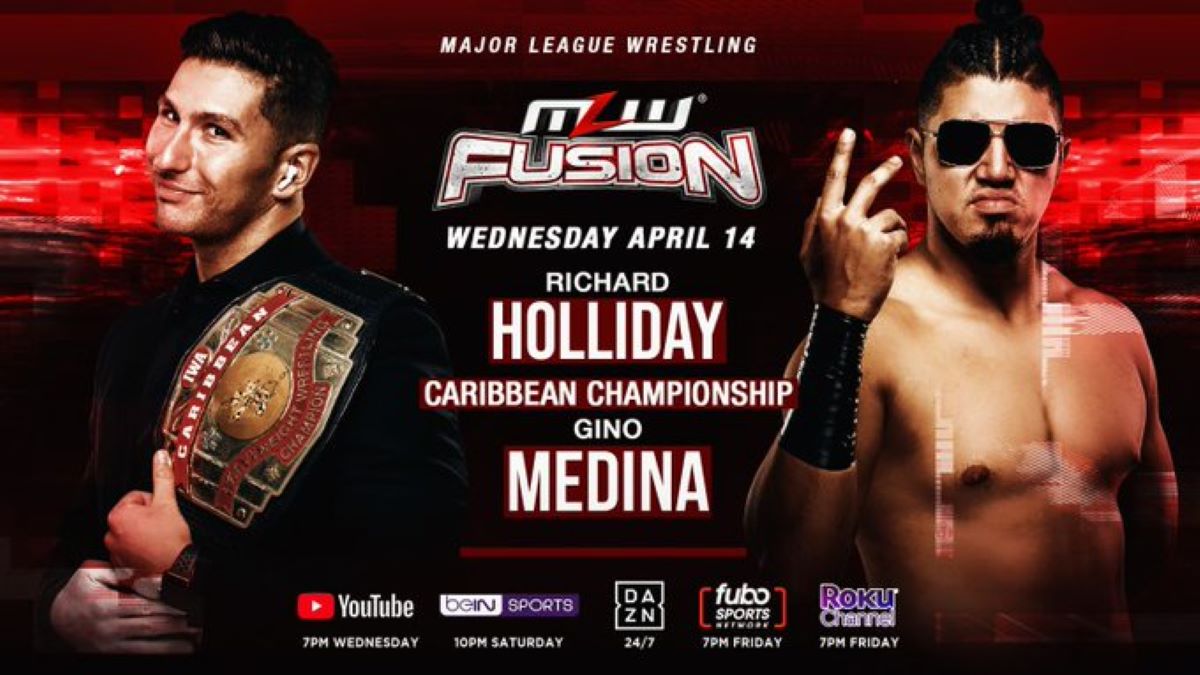 The match goes back and forth between the two former Dynasty members, with neither gaining a clear advantage.  While Flores notes that Medina is the son of one of the members of the faction Gringos Locos (which had in its stable Eddie Guererro, Art Barr, and Konnan, as well as Medina’s dad), Medina definitely channels Guererro to Cheat to Win by trying to expose a turnbuckle.  Holliday tries to add take down El Intocable, but dodges Holliday’s charge who goes in to the ring post shoulder first.  From there, it’s all Medina with a hammerlock to a short clothesline that gets him a two count.  But the Caribbean champ still has some life in him and Holliday answers back to Medina with a spinebuster for a count of two.

Medina at one point uses Holliday’s 2008 (spinning neckbreaker) finisher, but gets a two count, and is starting to get frustrated.  Medina goes back to the exposed turnbuckle, and tries to sends Holliday into it, but he manages to evade.   Medina and Holliday jockey for position, but Medina gets overenthusiastic and rushes to Holliday in the corner.  Holiday sidesteps and Medina hits the exposed turnbuckle, and now Holliday properly shows El Intocable how to hit his 2008 finisher, and the three count show the “consumers” he will retain and retain as…

We head off to Kauai with the Von Erichs. Marshall’s knee is hurting from the chain link match, and he’s trying to recuperate. In comes Kevin Von Erich, wrestling’s answer to Yoda, says that he got Keiji Mutoh to show some moves to Ross. Marshall wants to go, but poppa Kevin says to be patience to his Padawan, lest he injures and aggravate the knee further.  Marshall knows his dad has got his best interest in mind, and heads off with Ross to pack and get ready for Mutoh.

Now on to Hammerstone, who’s tired of everyone asking, “Who’s the champ?” He guarantees everyone will know once his hand is raised over Muertes.

We get a video package that gives a quick rundown on the feud between De La Renta/Konnan, and the angle that led to her getting involved with Azteca Underground acquiring her Promociones Dorado.  So now you know the rest of the story.

It’s time for the Interview Queen, Alicia Atout, who’s “interviewing” with TJP, fresh off his suspension. Atout mentions Bu Ku Dao is medically cleared to wrestle, and TJP just scoffs at the fact. Atout asks if he resents Dao, and TJP doesn’t worry about his social standing, since his pigs have a bigger following than Dao, and he’s done with the interview. Atout is just exasperated by this.  I feel ya, Atout. I truly do. 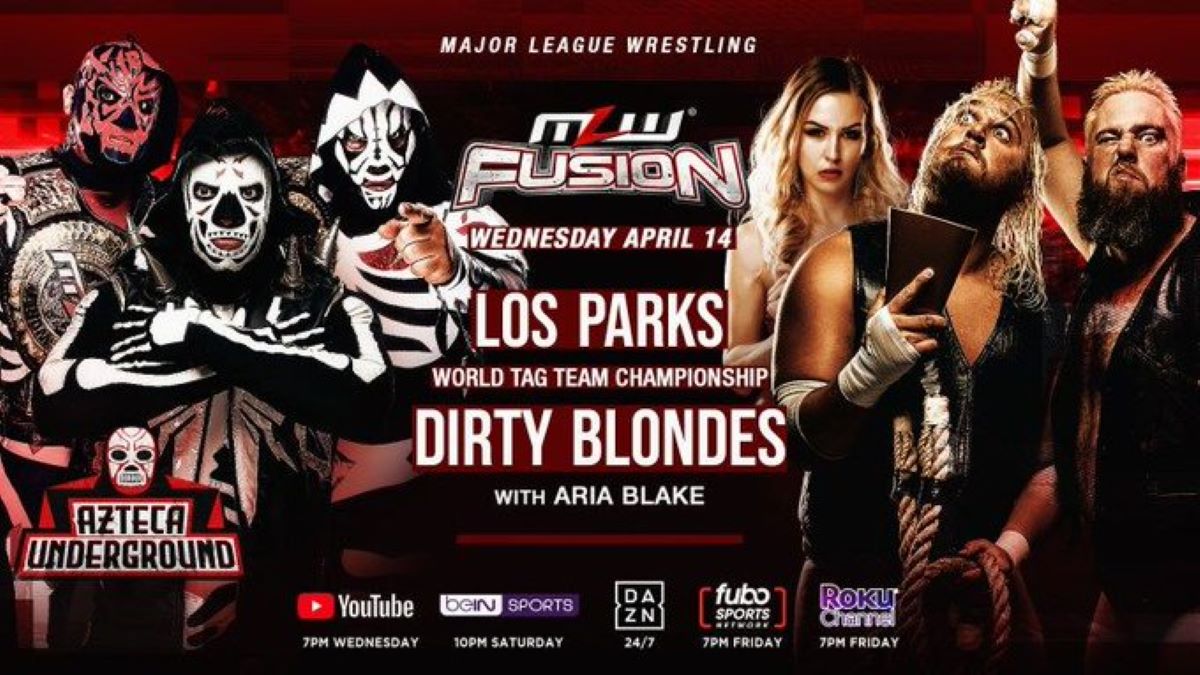 Beginning of the match has de la Renta and Blake go all real housewives of Salt Lake City in each other’s grill (minus the arrest for a telemarketing scam), as their respective teams keep them apart.  Once the bell rings, the Blondes take advantage and start brawling.

By the way, were you expecting a technical match that shows the sweet science of professional wrestling?  I thought so, and you are adorable for thinking that.

This match is anything but that; it’s just a Pier Four with the ref acting like he’s wrangling cats.  Big move has L.A. Park go for a springboard splash on both Blondes in a pinning predicament, but the Dirty Blondes kick out at two.  Both teams use underhanded moves to get the advantage, and at one point Leo Brien is up top the turnbuckle and gives a low blow to El Hijo de L.A. Park, who crashes down hard.  Brien pins, but L.A. Park comes to his son’s rescue and grabs the ref’s hand to block the three.  Now L.A. Park ,Jr. is outside to offer help to the familia.  With the ref distracted, Jr. comes in for a double low blow to both the Blondes’…err, little Blondies, and both Parks schoolboy for the count of one, two, three.

After the match, both Renta and Blake brawl, and somewhere from Philadelphia, you can hear the shrill screams of, “Catfight!  Catfight!!”

Another video package goes over the Mil Muertes/Hammerstone feud, if you hadn’t been following previously, and what de la Renta did to summon The Man of 1000 deaths

Then we get a promo from a muffled Mads Krügger. Dude, enunciate already!  If I want something that garbled and mush-mouthed, I’ll go to the McDonald’s drive thru.

Atout had the opportunity last week to interview with the current MLW Middleweight champ, Lio Rush, for an interview. Rush says he is called “Poseidon” because he makes waves wherever he goes. Atout addresses his music career, and people want to hear from the Man of the Hour. He leaves the fans with this: keep putting that money in his pocket, and keep watching. You know what time it is, since it’s Rush Hour (Atout doesn’t, since her watch needs to be rebooted.  Bloody Galaxy watches, I tells ya).

Myron Reed cut a promo addressing why he hasn’t got a rematch. He had to deal with Contra Unit, so that he can get them in the rear view in order to move forward with the title match down the road. His fight with Contra Unit has made him stronger, and he will get the belt back.  Reed calls for Reed-Rush II.  No need to sell me, ‘cause I’d be down for that.

MLW owner Court Bauer will be on the show next week, possibly to address the inter-promotion with DragonGate and MLW coming soon.  That’s something to look forward to in the future.  But for the present, let’s look to Your Main Event… 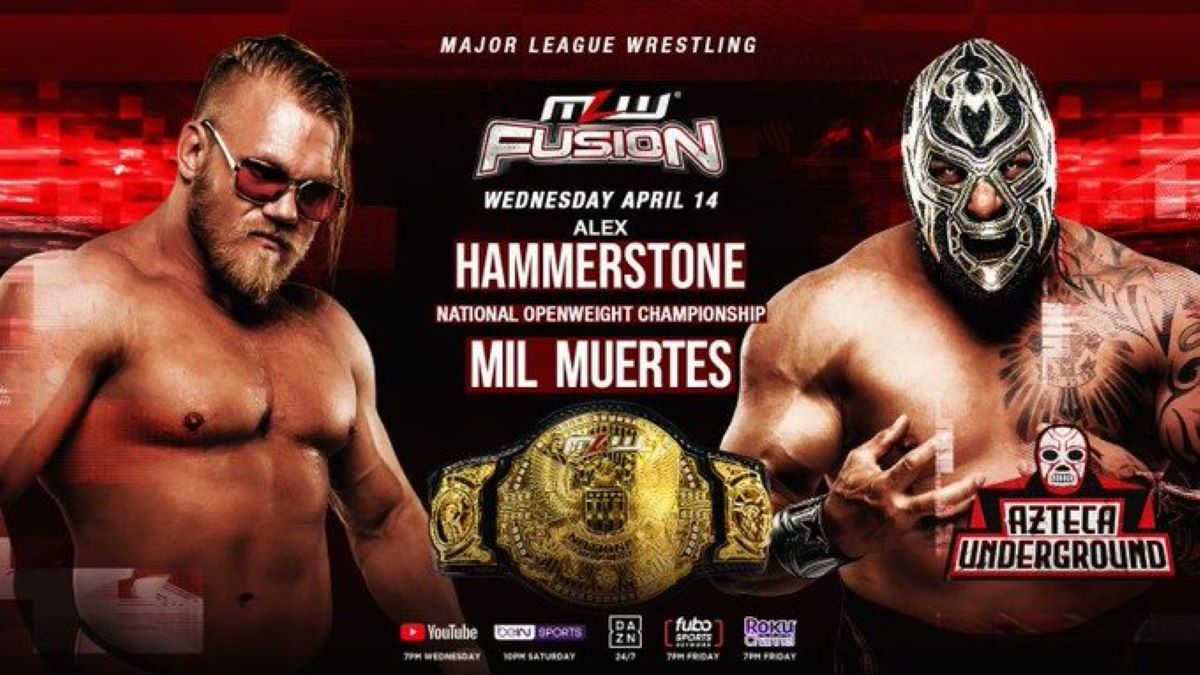 This looks to be a straight-up power match between The Master of Muscle Mountain and the Man of 1000 Deaths.  Well, faster than you can say, “By the Power of Greyskull”, as soon as the bell rings, Hammerstone delivers with a bicycle kick, and takes it to Mil Muertes, and follows up with a belly to belly suplex by Your Boy Hammer.  Hammerstone keeps up the offense up top with Missile dropkick, and Hammer is in the driver’s seat at the start.  Mil goes out for a powder, and Hammer gives chase, but Mil Muertes lures in Your Boy Hammer and pushes him lower back first to the edge of ring apron.  With that, Hammerstone’s momentum is gone.

Muertes proceeds to choke Hammer, and causes more pain by torqueing his neck from the outside.  Back in the ring, Mil focuses on the back/neck of Hammerstone, and suplexes him to add more pain to his already aggravated injury.  Mil hits a low Dropkick and DDT to Hammer, and just pummels Hammer on the ground with his fists.  Mil Irish whips Hammerstone to the corner, but Your Boy Hammer gets a foot up to stop the monster Muertes.  Muertes goes back to attack, but a clothesline clothesline by Hammer kills that opportunity.  Too bad it’s not enough to stop the Man of 1000 Deaths.

Mil gets Hammerstone in the corner and delivers shoulder tackles to wear down his midsection.  He goes to speak him through, but Hammer dodges as Mil’s goes shoulder first to the ring post.  Hammer goes to shoulder tackle, but Mil dodges as well.  Now a double clothesline by both men, and both go down hard.  The ref counts, and both are slow to get up. Hammerstone gets up first and delivers a forearm shot and clothesline, followed by a damn impressive walking pump handle slam.  That’s enough for the Master of Muscle man to pin, but it gets a two count.  Muertes answers back with a powerslam and a pin, but he, too, also gets a two count.  Mil steps up the attack with a backstabber to Hammerstone, and a repeated head butts.  Your Boy Hammer isn’t done, and gets a German suplex, followed by a sitout powerbomb, but it just ggets a two count. Hammer can’t believe it isn’t enough.  At this point, both men start chopping away, and Muertes gets Hammerstone in position with Straight to Hell, but Hammer reverses with the Nightmare Pendulum for the pin, and the ref counts one, two, and three!

As Muertes slinks away, with de la Renta heading to the back, Hammer gets on the mic. He tells us that this is step one, and he never lost the title.  Now that he has it back, it’s time for step two.  Well, step two gets interesting, because he says that he will hold a press conference, and he drops the mic, and holds the regained Openweight title aloft as we fade to back.

Not a whole lot of title changes, but a whole lot of angles getting pushed, so that’s always good.  The Main Event between Hammerstone/Muertes is the highlight of the night, and really showcases the power and the panache that Hammerstone possesses.  And the the announcement of a press conference?  That’s just icing on the cake.

The other highlight is that I just coined “Azteca Underground Associate Douchenozzle”  Not sure how that will fit on a T-Shirt, but… I got time.

Until then, See ya in seven!