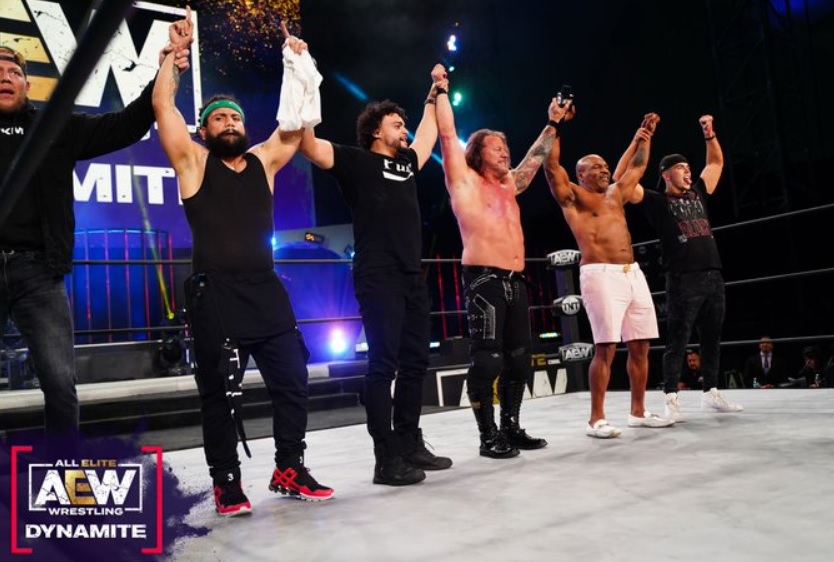 Why did the Young Bucks do what they did last week? Simple: They chose friendship and family. Matt Jackson ominously says that their next move is to show the world a newer, improved version of themselves. That’s as good a way as any to get this week’s episode of AEW Dynamite on TNT off and running.

You might know the guest enforcer for the Dax Harwood-Chris Jericho match tonight. It’s “Iron” Mike Tyson, and he’s not about to listen to MJF’s tomfoolery. But might he listen to MJF’s blank check? Well, he just tore it up, chewed it and spit it out at MJF, so perhaps not.

You know the Bucks have a new attitude because they’ve removed the tassels from their pants. Nothing says heel like no tassels! Ahem. They’re definitely carrying themselves with more swagger, bleeding into arrogance. Don Callis is surprisingly complimentary about the Death Triangle duo, but perhaps that’s just because he’s feeling good with his version of the Elite growing ever stronger. As a bit of a sneakerhead, I can’t help but notice that the Jacksons might be wearing Air Jordan 1 Retro High ‘Dior” kicks, which will set you back around 10 Gs. I almost hope they’re fake because it seems like a shame to wrestle in them. Matt Jackson does a pretty humorous shtick that mocks his own former face persona, something you don’t see too often. Pac hitting the Red Arrow actually has me thinking they are going to let the tag belts change hands, but shame on me: The Bucks cheat by hitting a low blow on Pac, then tearing off Fenix’s mask. As Rey covers his face to keep his identity a secret, he gets superkicked and quickly pinned. Heels, I tell you, heels! Anyway, this was an incredible match for a show opener.

Backstage, Alex Marvez wants a word with Adam Page about Kenny Omega and the Bucks, but all he gets is an update on John Silver’s shoulder before Hangman leaves to get everyone some southwestern egg rolls.

Jericho is in a surprisingly calm mood as he talks about how he got Tyson involved in tonight’s affairs. Iron Mike calls him a friend but insists he will call it right down the middle tonight, and won’t hesitate to knock Jericho out (again) if he gets out of line.

It’s come to my attention that some of you are enjoying this feud more than I am, which isn’t hard since I really haven’t liked it much at all. Matches like this one might help win me over, as it allows Red Velvet to showcase more of her talent before she is inevitably pinned.

Britt Baker has some breaking news, showing off the women’s rankings and explaining how she’s working her way toward becoming the No. 1 contender.

In case you’re not familiar with Ogogo, he is an Olympic medalist in boxing now making his AEW in-ring debut. Thus, it makes perfect sense for this squash match to end with a knockout.

Things may not be so great between Miro and Kip Sabian, but he hardly seems to care as he warns anyone with gold that he’s gunning for them.

Tyson has to intervene early to prevent the combatants from using a steel chair or Jericho’s beloved baseball bat, Floyd. There are other hijinks on tap as well, though they mostly take care of themselves thanks to the stipulation that each wrestler is only allowed to have one second for this bout. That doesn’t stop the entire rosters of the Inner Circle and Pinnacle from spilling out onto the stage for a brawl, which naturally attracts the attention of referee Aubrey Edwards. Wheeler tries to take advantage of the chaos to strike with Floyd, but one right from Tyson ends that idea. Seconds later, Jericho hits the Judas Effect to get the win. Jericho makes Tyson an ancillary member of the Inner Circle after the bell.

The Elite kicks Marvez to the curb so they can cut a promo. Callis says just when you think you’ve seen it all, you haven’t seen anything. Omega explains that they didn’t change, they just got sick of doing what everyone wants them to do. Matt Jackson puts the tag division on notice, and Callis warns everyone they should be “prepared to be surprised again” before superkicking the cameraman.

One belt isn’t enough for Thunder Rosa, because she wants both the AEW and NWA straps around her waist. It’s good to have goals.

This is Statlander’s first Dynamite match in more than 10 months, so you could argue she deserves a squash more than most. The alien gimmick seems to be less evident this time around, which is probably not a bad move. The Supernova spells the end for regular Nova.

Team Taz is still standing by for an answer from Christian Cage, and Taz doesn’t want either Ricky Starks or Brian Cage out with the group to hear it since they’re a bit “combustible.”

After Tony Schiavone gets a few words from Christian, Taz comes out to demand an answer. Christian says he was going to do it in the back like a professional, but since he’s being pressed, he says that he isn’t in AEW to fix Team Taz’s problems, he’s there to win championships — so his answer is no. Next come insults between Christian and Taz, followed by fists courtesy of Powerhouse Hobbs. It’s a pretty comprehensive beating, so it looks like we know who Christian will feud with first.

A video package gives us some brief hype for the Hikaru Shida-Tay Conti title match next week.

No members of the Hardy Family Office accompany Big Money Mat to the ring, but smart money says they’ll be on hand if needed since anything goes. It’s hard to shake the feeling that Allin is going to take punishment for about 10 minutes and then make a heroic rally. Alas, just when the tide starts to turn in his direction, Butcher, Blade and Private Party all hit the ring. The Dark Order evens the odds, followed by a bat-wielding Sting, who clotheslines both members of Private Party from ring to floor. That doesn’t stop the ongoing violence between Allin and Darby, which is only going to end one way: with Allin jumping off something tall for a Coffin Drop through a table. That’ll do it for Big Money.

And that’s all for this week, not that you need to follow Allin’s bravery with anything. See you in seven!

When you start with a PPV-caliber tag team title match and end with a violent match that ends with someone jumping off something very tall, does what comes between even matter? OK, yes it does, but those two bouts were great fun and the rest of the show was solid to above average. Dynamite tends to vary wildly in tone and quality from week to week between themed episodes, and this was an example of how good it can be when things fall into place. Also, Mike Tyson was on.