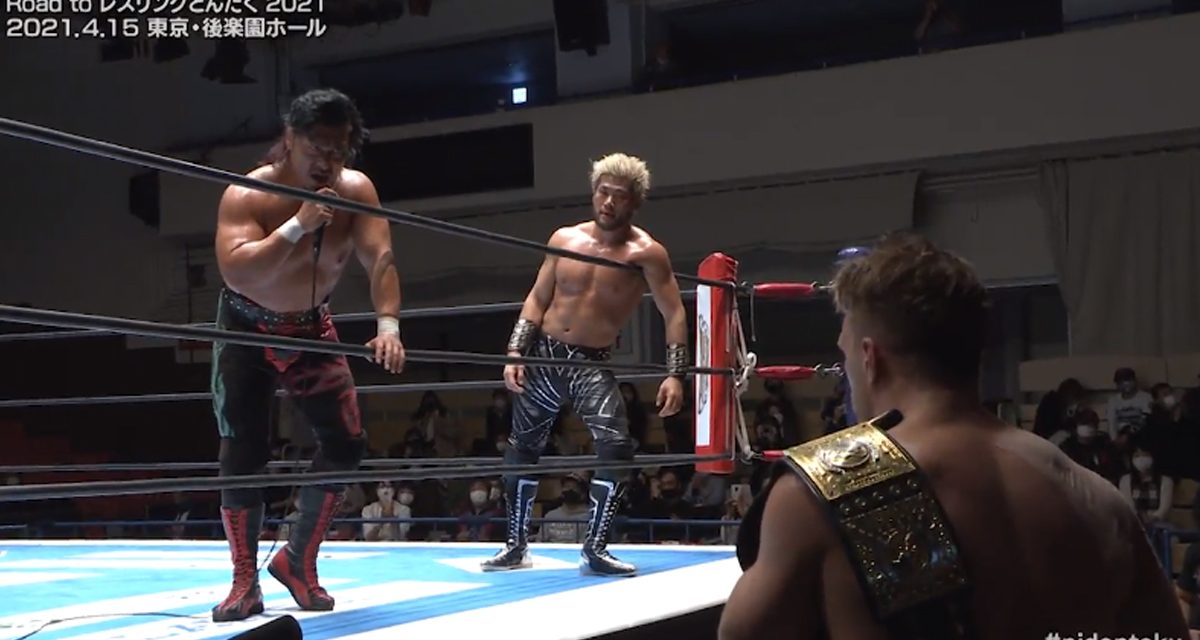 As if they didn’t hate each other already, the feud between Los Ingobernables de Japon and The United Empire escalated on night three of NJPW’s Road to Wrestling Dontaku as the two factions dominated the main event matches.

In one, it was Tetsuya Naito and Bushi versus The Great-O-Khan and Jeff Cobb and in the other Shingo Takagi and Sanada took on IWGP World Heavyweight Champion Will Ospreay and Aaron Henare.

In the first bout, Naito mocked Khan by imitating his taunt stance, standing motionless with his arms behind his back. Naito paid for his mockery though as Cobb and Khan cut him off from Bushi battering him from pillar to post for ages and ages. Bushi tried to lend a hand but every time he did either Khan or Cobb would throw him out of the ring.

Things broke down in the end with Khan taking Naito out of the equation with the Dominator and Cobb pinning Bushi with Tour of the Islands giving The United Empire the win.

The team of Sanada and Shingo Takagi fared a bit better getting one over on Ospreay and Henare.

During the final moments of that bout Henare couldn’t match Shingo’s power and needed Ospreay to save him from a pinfall. This left champion and challenger to go head-to-head once again. Shingo backdropped Ospreay into the lights. Ospreay scurried out of the ring. Sanada splashed him to keep him on the floor. Ospreay clutched his knee after being crushed by Sanada. When a Pumping Bomber didn’t pin Henare, Sanada entered the fray with a spinning Skull End to weaken Henare even more. Shingo pinned Henare with Last of the Dragon. Ospreay looked troubled and worried as he tended to Henare clutching the title belt to his chest.

Ospreay puts the IWGP World Heavyweight Championship on the line against Shingo Takagi at at night two of Wrestling Dontaku on May 4th.

Honma fights his way out of the Gotch Style Piledriver but submits to a heel lock by Suzuki. Suzuki-gun puts the boots to the tag champs.

In a funny moment, Loa and Taichi take turns choking each other and breaking each other’s chokeholds. Tonga Gun Stuns Douki into oblivion as he dives off the ropes. It is similar to a finish a few shows ago. Previewing their tag team championship match, the Guerrillas of Destiny and Dangerous Tekkers brawl after the match is over before heading back to the locker room. 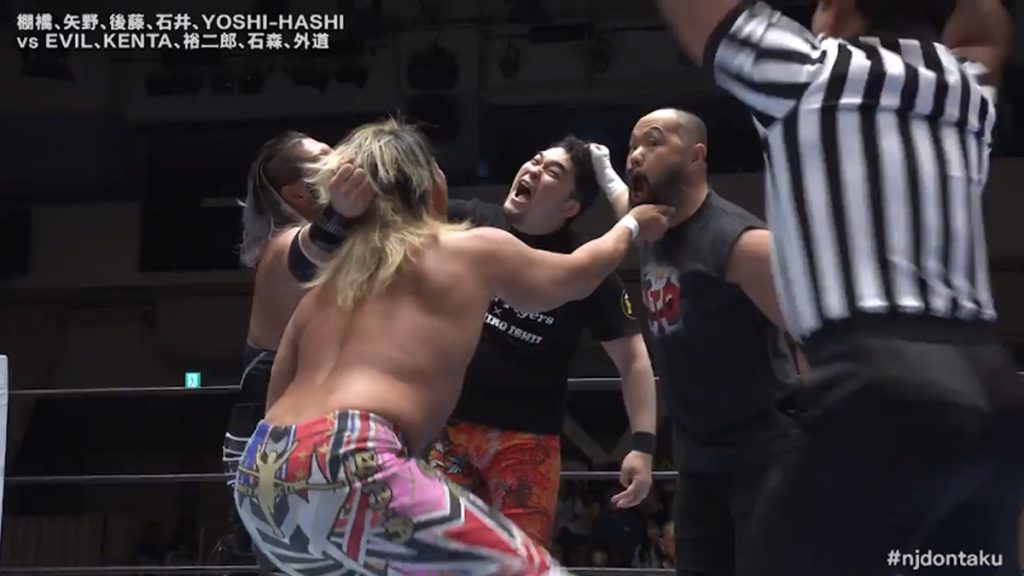 Yano demands to be tagged in. He brings his hood with him. Evil takes it from him and throws it out of the ring. Evil, The Ace, Gedo and Yano get into four-way hair pulling standoff. Well, technically, The Ace is pulling Gedo’s beard. The official finally steps in breaking it up. Hashi ducks as Gedo takes a swing with his brass knuckles. The Ace takes Gedo down with a slingblade.

Hashi has Gedo in his Butterfly Lock. Kenta dives in with Hashi’s bo stick. The official is distracted cutting off Kenta at the pass. Yujiro rushes in with his cane. Ishii knocks him right out of the ring before he can cause any damage. The lights in the arena go out. When they come back on, Evil has choked out Hashi with Dick Togo’s garotte and Kenta has the official down on the mat. Yano low-blows Evil, puts the hood on his head and shoves him out of the ring. Hashi disarms and knocks out Kenta. Goto clobbers Gedo setting him up for Hashi’s Butterfly Lock again. Gedo submits. Yoshi takes his bo stick back.

Winners: The United Empire (The Great-O-Khan and Jeff Cobb)