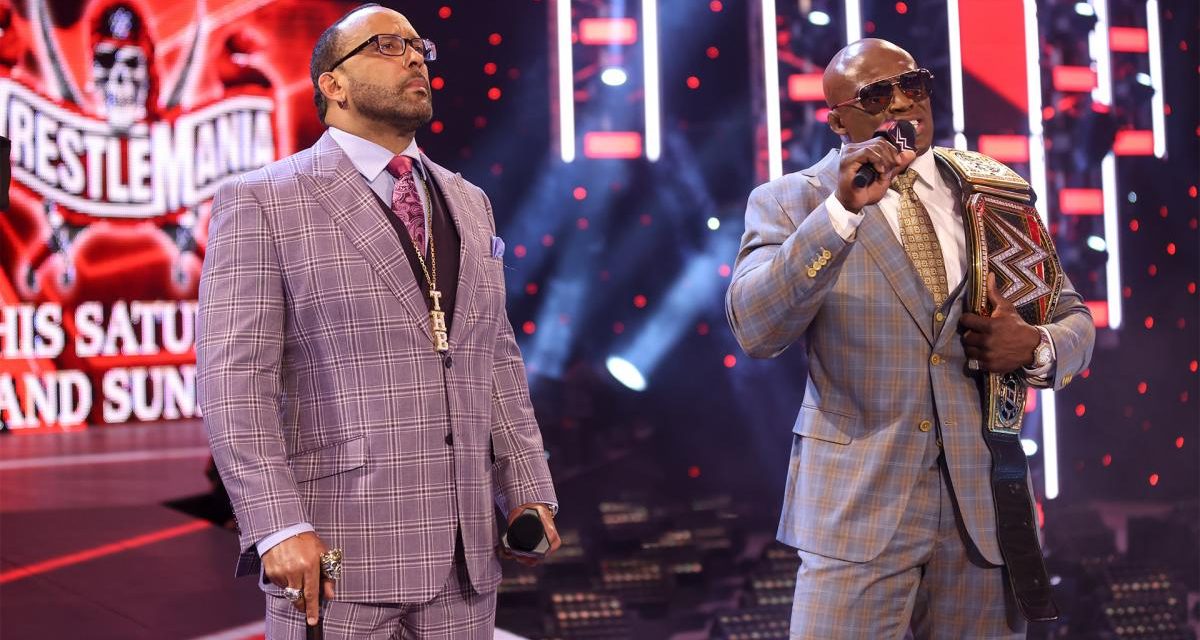 This is it. The final Monday Night RAW before WrestleMania. Hopefully tonight’s show is better then the absolute clunker WWE trotted out last week. This is also the last RAW from Tropicana Field. Something about the Tampa Bay Rays wanting to play in their own stadium. Like they own it or something. Time to head into the ThunderDome at Tropicana Field one last time.

Drew McIntyre hits the ring and he can’t wait to face off with Bobby Lashley at WrestleMania. He is adamant that the match is going to happen. He is willing to sacrifice everything to win and how do you beat a man like that. He vows to take care of Baron Corbin and then win back the WWE championship at ‘Mania.

The reigning champ walks out with MVP. Lashley gets what Drew is saying, but his time is over. It’s All Mighty time. Lashley thinks he saw fear in Drew’s eyes last week, and at WrestleMania he will make him pass out in the Hurt Lock. Drew wants to fight now, but MVP shuts that down. MVP goes on to tell McIntyre that he may now even make it to WrestleMania. Out walks Baron Corbin, who says he will finish what he started last week.

Riddle rolls up on the The New Day at gorilla position. He makes some veiled weed jokes.

Styles fires off a shot to the throat and slams Woods to the mat. AJ rolls through into a Calf Crush. Kofi yells at Omos and throws the microphone at him. Kofi retreats into the ring, as Styles release the hold. AJ yells at Kofi. From behind, Woods rolls up Styles and gets the pin with an inside cradle.

Bad Bunny and Damien Priest roll up to the Dome in a Bugatti. They say it’s valued at three million dollars.

Braun Strowman may not be stupid but this story with Shane McMahon sure is. Braun stands inside the steel cage, telling Shane he doesn’t know what he has gotten himself into. Braun is going to whoop Shane for everyone that has been insulted. Shane shuffles out on stage. He let Braun chose the match to test his intellect. Shane is impressed by Braun choice of a steel cage, if he were any other man. Shane says he will outwit Braun and beat him in the steel cage.

Braun Strowman vs. Elias and Jaxson Ryker – 2 on 1 Handicap Match

Ryker saves Elias from a power slam and Elias hits a knee to the face. They double team Braun, slamming him t the mat. Ryker with a diving headbutt and Elias follows with an elbow drop from the top rope. Strowman powers out of the pin, as Shane makes his way to ringside. Braun sends Elias and Ryker flying, so Shane retreats. Braun crushes both men in the corner and power slams both of the them. Strowman covers both Elias and Ryker and gets the pin.

Kevin Patrick wants to get a word with Miz and Morrison, but notices they are carrying paint cans. Miz claims they are artists, but we all know that they are going to deface Bad Bunny’s Bugatti. Which they do.

After the break, Bunny sees his car and is distraught. Miz attacks from behind. He and Morrison beat him up. WWE officials chase them off. Adam Pearce calls for a medic.

After smashing a table into Asuka’s face last week, Rhea Ripley will team with her tonight to take on the tag team champs. I feel like we have see this before. Earlier in the day, Sarah Schreiber asked Rhea how she would co-exist with her. Rhea won’t reveal any strategies.

After WrestleMania there needs to be a moratorium on foes having to team up to face the tag team champions. Smackdown and RAW have now run this trope into the ground. Asuka climbs to the top turnbuckle, when Rhea shoves her to the floor. She slams Asuka into the floor, before serving her up for Shayna Baszler, who hits a knee strike. Baszler covers and gets the win.

Cedric steps to MVP, who hope he isn’t trying to get back in the Hurt Business. Cedric picks him up by the collar, calling out his greed. He calls MVP washed up. Cedric tells him he may not beat Lashley tonight, but he will give him something to remember.

MVP tells Sarah Schreiber that he is disappointed in Cedric and Shelton’s attitudes and tells Lashley not to worry about what happened.

Schreiber wants to know if Nia Jax and Shayna Baszler are prepared to face the team that comes out of the match on Saturday of WrestleMania. Several of the teams show up, causing the champs to storm off.

Lashley has words with Benjamin before the match. Shelton and Alexander team up to beat on Lashley before the bell. Lashley knocks Shelton from the ring and the ref calls for  the bell to start the match. He drives Cedric into the corner with several shoulder thrusts. He tosses Alexander to the floor. Lashley spears him in the corner before dropping him with a vertical suplex. Lashley tosses Cedric back to the floor and slams him into the ring post. Benjamin saves Alexander from getting slammed into the post again. Cedric knocks Lashley into the ring steps. He follows with a suicide dive.

In the ring, Alexander hits the Nueralizer. He goes up top, connecting with a missile drop kick. Lashley kicks out at one. Lashley slams Cedric to the mat. He hits the Dominator and follows with a spine buster. Lashley applies the Hurt Lock and Alexander passes out.

Shelton Benjamin has to jump in to get Lashley to releaser the hold. Benjamin gets put in the Hurt Lock and he passes out.

Bad Bunny and Damien Priest head to the ring. Priest calls out Miz and Morrison for crossing a line and wants to up the odds at WrestleMania. He wants a tag team match. Bunny is down for it, and doesn’t understand why the Miz doesn’t respect him. All Bunny does is love and respect the WWE. Miz and Morrison interrupt Bunny’s impassioned plea, telling Bunny that he doesn’t belong here. Morrison accepts the tag team match.

Backstage, Sheamus wants to talk to Mustafa Ali. He will be rooting for him against Riddle, tonight. Riddle zooms right by them on his scooter.

Sheamus joins the commentary team. Ali blames Riddle for Retribution’s break up. Riddle looks to lock in a triangle, but Ali makes a pin, forcing Riddle to kick out. Riddle drops Ali to the floor, kicking him from the apron. Riddle steals Sheamus’s hat, only for Ali to attack him from behind.

Back in the ring, Ali is pummeling Riddle in the corner. Ali stomps on Riddle’s foot and locks in a body scissors. Riddle gets to his feet, breaking the hold by crashing onto his back. A kicks sends Ali into the corner. He hits an exploder, but misses a standing moonsault. Riddle hits a Bro-ton, but Ali counters into a Koji clutch. Riddle escapes.

Riddle with a kicks to the chest. He catches Ali going for a tornado DDT and hits the Bro Dereck. Riddle covers and gets the win.

Drew McIntyre is not threatened by Baron Corbin and isn’t worried about be taken out by him.

Backstage, Bobby Lashley seems to want to face Drew McIntyre at WrestleMania. He wants to put him to sleep.

MVP joins the commentary team, since he has a vested interest in the outcome of the match. What does take out Drew mean, though? Does Corbin get the WrestleMania match if he wins? Or does he just have to hurt Drew so he can’t wrestle.

The two trade blows in the middle of the ring. Drew gains the upper hand, sending Corbin to his knees. Corbin back drops Drew onto the apron and then smashes him into the ring post. MVP cheers him on, as he slams Drew into the announce table. Corbin rolls him back into the ring, raining elbow shots onto him. McIntyre looks for a suplex, but Baron reverse with one of his own. Corbin unloads a flurry of elbow strikes. McIntyre fights to his feet, but gets choke slammed. Drew kicks out.

McIntyre catches Baron with a spine buster. Baron Corbin hits a side slam, but still can’t get the pin. McIntyre delivers a headbutt and follows with the Future Shock DDT. Corbin kicks out of the pin. Drew goes up top, but Baron meets him there with a forearm shot. Corbin with a superplex, but Drew kicks out of the pin. Baron Corbin hits the Deep Six, but he still can’t get the pin.

MVP gets to his feet, begging Corbin to take Drew out. He hands Baron his cane. McIntyre ducks the can shot and comes off the ropes with a Claymore kick. He covers Corbin and gets the win.

Bobby Lashley joins MVP on stage to stare down McIntyre in the ring as the show closes. See you this weekend for WrestleMania in the ThunderDome!

Monday Night RAW delivers a dud for the second week in a row. This show did nothing to entice anyone to by WrestleMania, maybe because WWE knows that we are going to watch it no matter what. The best thing going on RAW is Randy Orton, Fiend, Alexa Bliss story and they were no where to be found outside a recap video. The show did move the final pieces into place, but we all knew that Drew McIntyre wasn’t going to be taken out by Baron Corbin. And other than turning Bad Bunny versus the Miz into a tag team match, nothing else was accomplished.