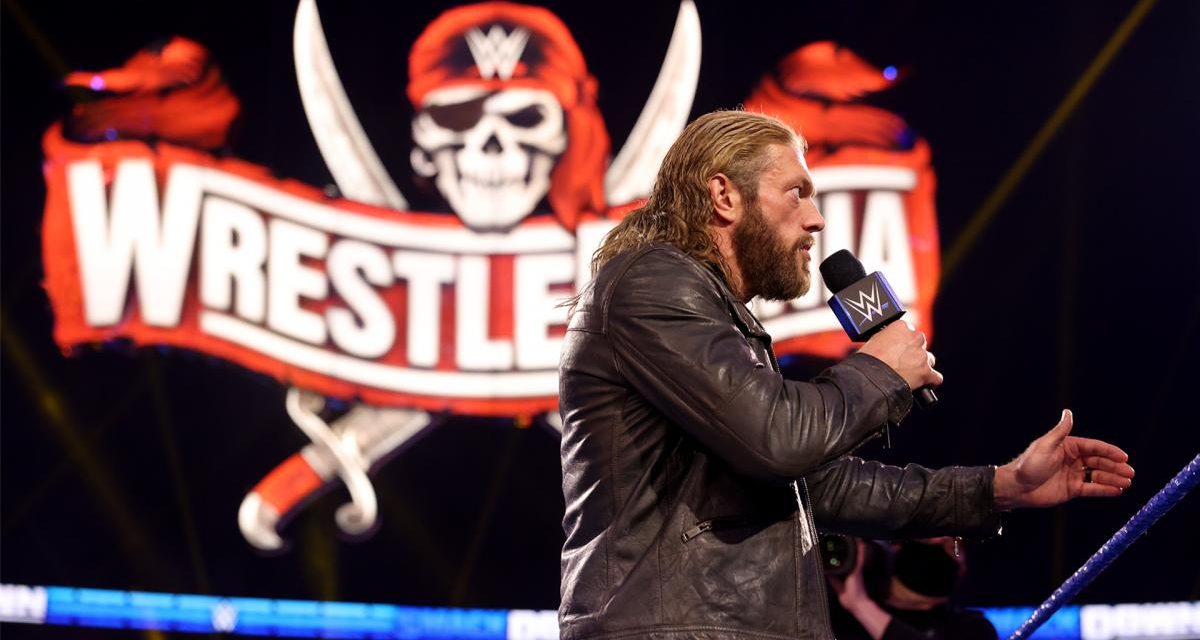 Edge comes out to kick off the show. He complains about how Daniel Bryan “weaseled” his way into the main event of WrestleMania. Edge realizes he got outplayed by Bryan, but he also acknowledges that Bryan’s actions brought out his competitive edge, no pun intended. He says he’s finally the Rated-R Superstar once more, and that he enjoyed beating his opponents with chairs last week. He stares dead into the camera and promises Roman Reigns and Daniel Bryan that next time he has them ready for the Conchairto, he won’t hesitate.

He leaves, and Kayla Braxton interviews him backstage. Kayla asks him if he would feel bad if Daniel was beaten so badly during his Street Fight against Jey Uso tonight that he wouldn’t be able to compete at WrestleMania. Edge says no, in fact, he’d be overjoyed.

The Alpha Academy stands in the ring, and Chad Gable grabs a mic. He says that they’ve reached their full potential, and that they’re going to win the SmackDown Tag Team Championships next week.

Ziggler starts off against Dominik, and the veteran goes right after his younger opponent with kicks. Dominik fights back with a Tornado DDT for 2. Rey runs in and attacks Roode, and all heck breaks loose. The Mysterios and the Profits dump their opponents outside the ring, and Ford, Rey and Dominik dive outside to land on all four men as we go to commercial.

When we come back, Rey is tagging in Dawkins, who strikes Ziggler with a series of clotheslines and a suplex. He suplexes Gable as well, but when he goes for a spinning splash on Ziggler, Roode pulls his partner out of the way. Roode gets a right hand from Dawkins, but Otis rocks Dawkins with a clothesline before tagging himself in and striking with an ax handle for 2. Otis continues the assault with an Irish whip and more clubbing blows, and he tags in Roode who delivers a lovely suplex for 2.

Roode tags in Ziggler, who locks in a front facelock. Dawkins tries to fight out, but Ziggler tags in Otis, who locks in a submission. Dawkins fights out of it with a Stunner, and the two tag in Ford and Gable. Ford takes out everyone with dropkicks, before slamming Gable with a suplex and hitting a standing moonsault. Ziggler breaks up the pin, and Rey looks for the 619 on him, but Roode pulls him outside. 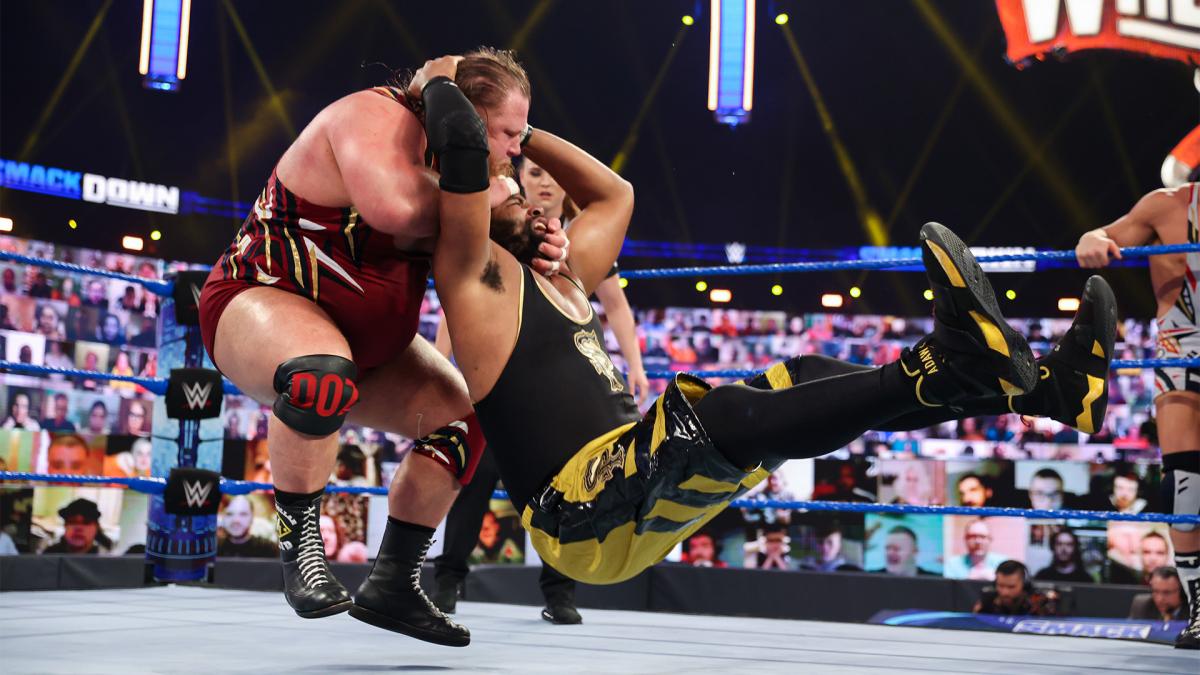 Angelo Dawkins with a Stunner to Otis. Photo: WWE

Rey slams Roode into the barricade, Dominik takes Ziggler to the outside, and Ford rolls up Gable for a close 2 before dropping him with an enziguri. Ford climbs the ropes and looks for a Frog Splash, but Gable dodges it, hits Chaos Theory, and tags in Otis, who crushes Ford with a splash for the win.

Backstage, Adam Pearce and Sonya Deville are approached by Paul Heyman, who spouts some legal jargon that basically means he wants Jey to be able to do whatever he wants to Daniel Bryan tonight in their Street Fight. Pearce doesn’t like the idea, but Deville agrees.

Cesaro and Seth Rollins have a little chat in the ring. Corey Graves asks Cesaro if this WrestleMania match will be his breakout moment, y’know, the one he deserved long before this. Cesaro says that it will be, because “swing is in the air.” Rollins says Cesaro won’t get in his head, because when it comes to WrestleMania, Rollins is a legend.

Corey asks Cesaro if he thinks he can beat Rollins, and Cesaro says he wouldn’t be here if he didn’t. Rollins says he is unshakable. Cesaro says he may be unshakable, but he isn’t unswingable. Rollins explodes on him insulting him and threatening to end his career here and now. Cesaro doesn’t even flinch, telling him to take a swing. Rollins decides better, and leaves the ring in a huff.

With Nia Jax on commentary, Natalya goes right after Shayna, pushing her into the corner and beating her down. She goes right for the Sharpshooter, and Shayna escapes, but Natalya rolls her up to get the quick win.

Nia attacks Natalya, and Shayna goes after Tamina. The Riott Squad come in and double team Nia, and Mandy Rose and Dana Brooke take out Shayna and Nia with kicks and a flapjack. Naomi and Lana come in and clean house as well, but Tamina and Natalya come back into the fight and deliver a Hart Attack to Lana. Look at all these teams who would be better with the titles than Shayna and Nia. Crazy. 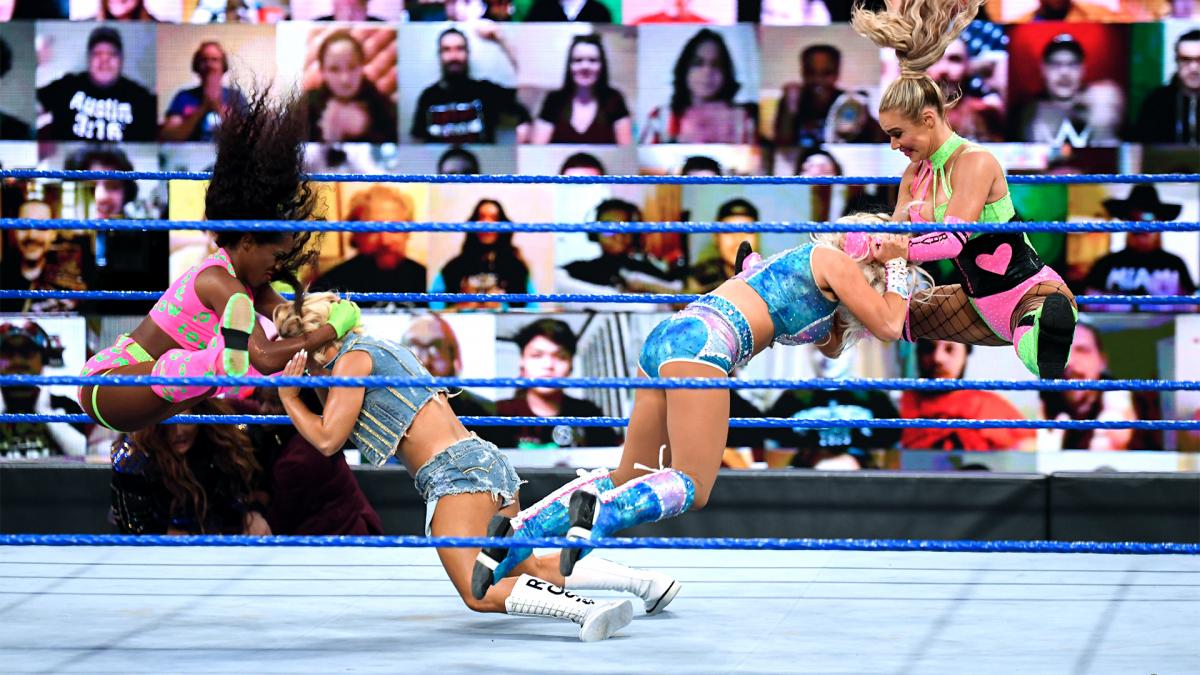 Also, Carmella watches the kerfuffle backstage, and Billie Kay brings Carmella her resume. Carmella waves her away initially, but she changes her mind, takes the resume, and begins giving it a read.

It’s time for Sami Zayn’s trailer premiere, with special guest Logan Paul, who Sami meets as Paul exits a limo. Sami comes out and introduces Paul, who has a Titantron and a theme and everything. Ew. Sami thanks him for standing against the conspiracy. Sami invites Logan to be his guest at WrestleMania as well, and Logan accepts. Sami finally shows his trailer, and, well, it’s… it’s what you’d expect. It’s incredibly vague and offers no proof.

Logan says the trailer is compelling, but also, Kevin Owens visited Logan backstage and told him that Sami is delusional. Sami loses it a little, but regains his composure, saying that he wants Logan to think for himself. Before Logan can say anything, Owens hits Zayn with a Stunner. K.O. shoves Logan as he leaves the ring. Owens is interviewed backstage, saying that he Stunned Sami to send a message. Sami sends a message of his own, attacking him from behind and shoving him into a pile of metal poles that was just around for some reason. 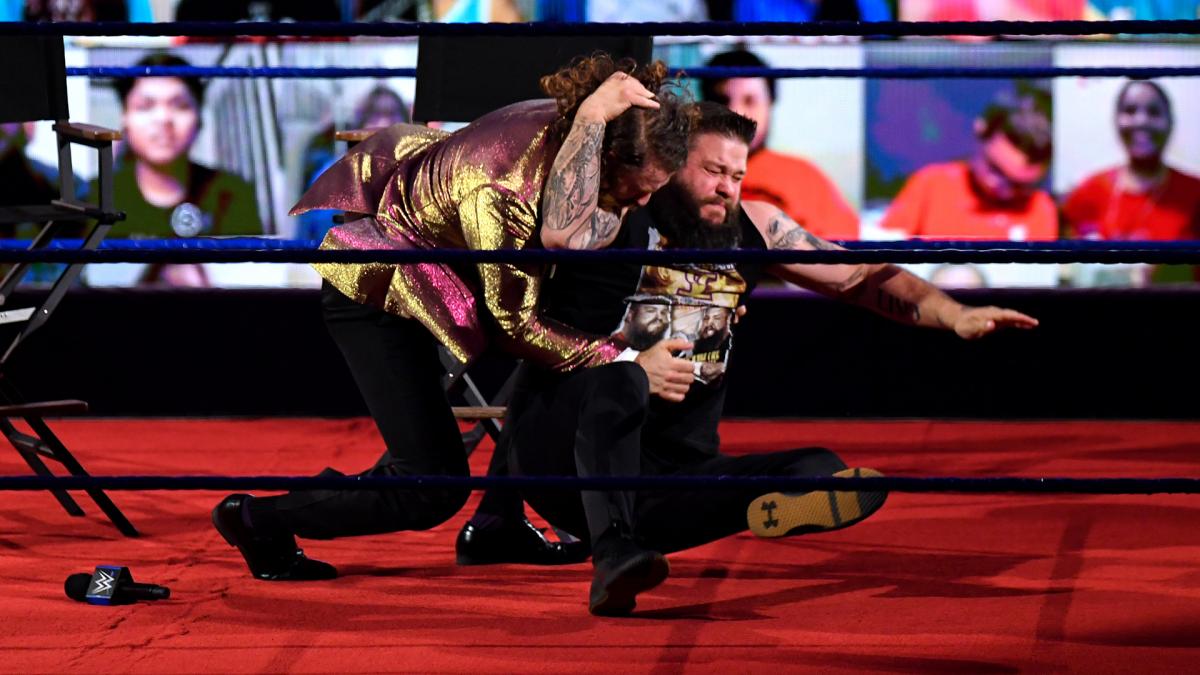 Edge goes backstage and lets Pearce and Deville know that he’ll be on commentary during the Street Fight. I am absolutely positive that this development will offer no hinderance whatsoever to the previously established one-on-one structure of the Street Fight.

Carmella attacks Belair before the bell rings, kicking her and slamming her into the barricade and the steel steps as we go to commercial. When we return, Belair is fighting out of a sleeper hold by ramming Carmella into the corner. Carmella turns it into a headscissors over the top rope, and when Belair tries to turn it into a powerbomb, Carmella reverses it into a hurricanrana before delivering a Bronco Buster for 1. Carmella ties Belair’s hair to the bottom rope and stomps her gut.

Carmella goes for an attack in the corner, but Belair absolutely decapitates her with a clothesline. The EST continues the assault with a dropkick and a series of rights, but when she goes for a standing moonsault, Carmella dodges and delivers a Superkick for 2. She goes for another, but Belair cleanly reverses it into the K.O.D. to get the win. 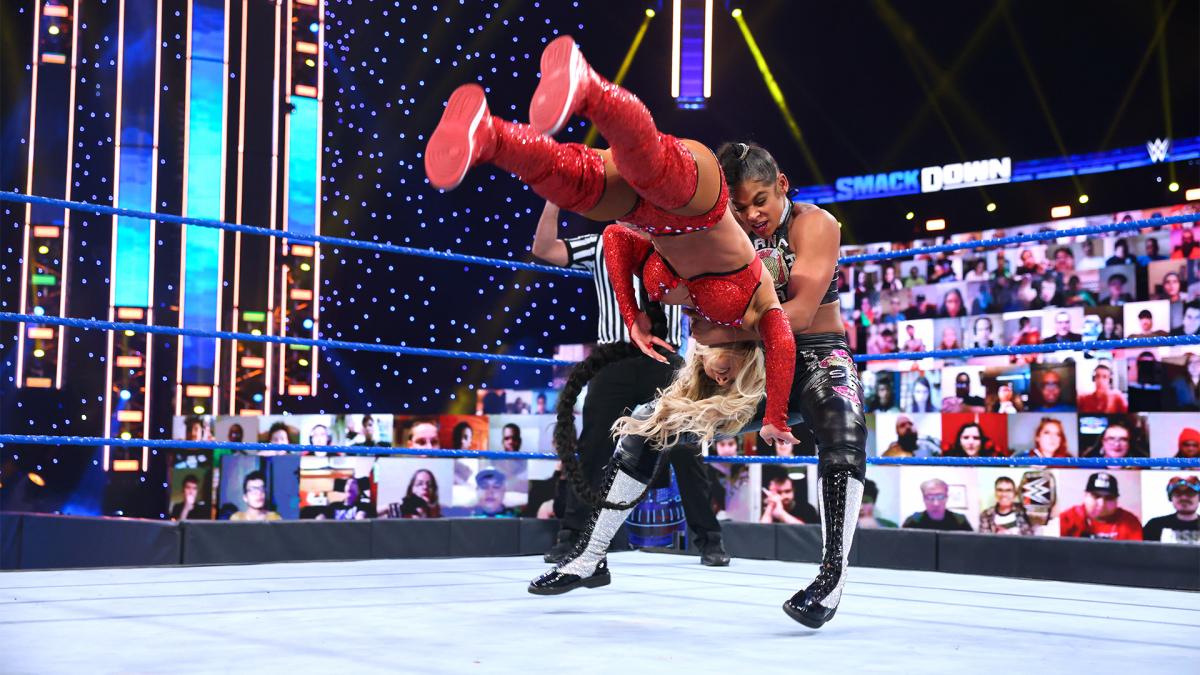 Bianca Belair puts away Carmella with the K.O.D. Photo: WWE

After the match, Banks comes up behind Belair and almost attacks, but Belair catches her and tells her to save it for WrestleMania.

Apollo Crews challenges Big E to a Nigerian Drum Fight at WrestleMania for the Intercontinental Championship. Apparently, a Nigerian Drum Fight is a fight where the strikes are so loud it sounds like drums beating. So the stipulation is just “Hit harder than normal?” Gee, why isn’t that always the strategy? Crews is really one step ahead of everyone, isn’t he?

Paul Heyman approaches Edge backstage. Paul tells him that they want the same thing, to have Daniel Bryan out of the WrestleMania match. Edge tells Paul that he’s only out there for commentary.

With Edge on commentary, the two predictably go right after each other. Jey gets control with a back elbow, and tosses Bryan to the outside. Bryan fights back with punches before running Jey into the barricade. Jey regains momentum by slamming Bryan into the barricade himself. Jey grabs a chair, but Bryan strikes with a wrecking ball dropkick. He goes for a suicide dive, but he gets met with Jey’s chair.

Jey continues the assault with more chair shots, but when he tries to wrap the chair around Bryan’s leg and deliver a splash to the leg, Bryan moves, takes the chair, and gets some payback with chair shots of his own. Jey rolls to the outside to collect himself, and Roman Reigns makes his entrance as we go to commercial.

When we come back, Bryan is delivering hard kicks to Jey in the corner. He delivers a running dropkick, but Jey catches him with a superkick when he tries for it again. Jey sets the chair up in the corner and slams Bryan into it before beating him down. Jey goes under the ring and grabs a steel chain. He clotheslines Bryan with it, before wrapping it around his fist and punching him with it.

Jey delivers the Uso Splash, but Bryan kicks out at a close 2. Jey brings Bryan to the outside and whips him into the steel steps. He takes the top part of the steps off and slams Bryan into them, but when Jey goes for a suplex on top of the steps, Bryan hits a suplex of his own.

Bryan delivers more chair shots before slamming Jey into the announce table while staring Edge right in the eyes. Bryan goes back to the ring and hits a missile dropkick. He delivers the Yes! Kicks and grabs the steel chain, wrapping it around his arm and delivering a series of brutal elbows. He locks in the Yes! Lock, and Jey is forced to tap out.

Barely any time after the match is over, Bryan runs at Edge with a running knee. He slams the Rated-R Superstar into the ringpost 3 times before going after Reigns. Reigns tosses his chair at him, but Bryan dodges it, hits a running knee, and then locks the champ in the Yes! Lock, not letting go until he passes out. Bryan goes back into the ring and gets up on the ropes, and the show ends with him leading the fake crowd in a Yes! chant.

Did Shayna Baszler really just get pinned in one of the shortest matches in recent memory? Seriously? Also, just the thought of Logan Paul on SmackDown was awful, but it actually happening was an experience I’ll never forget, in the worst way possible.