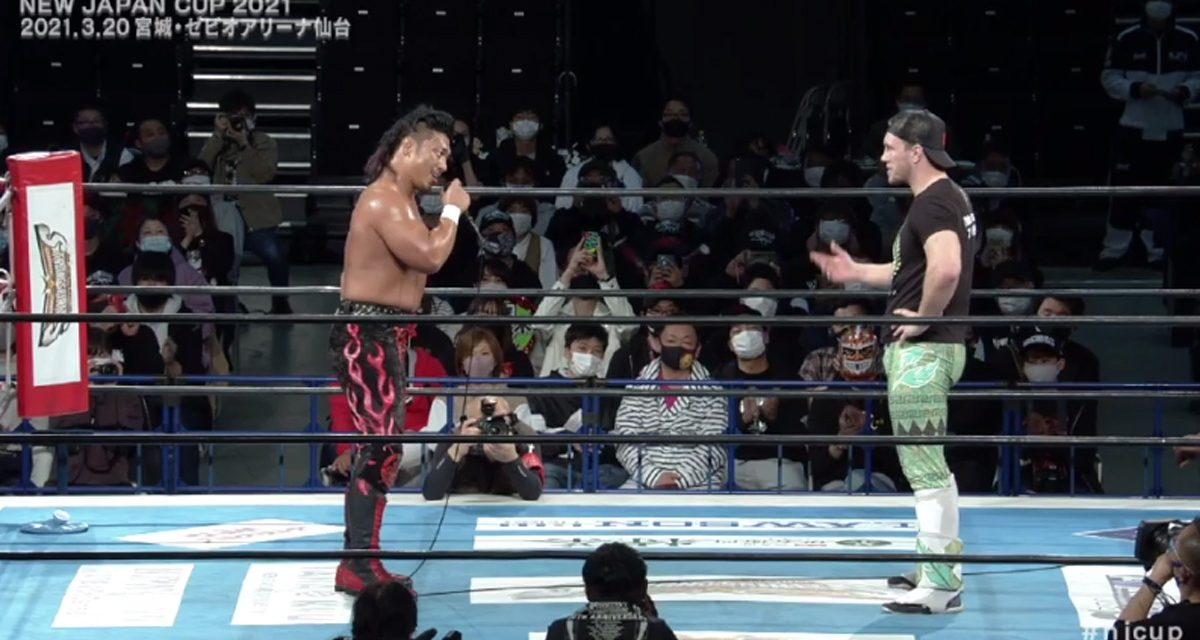 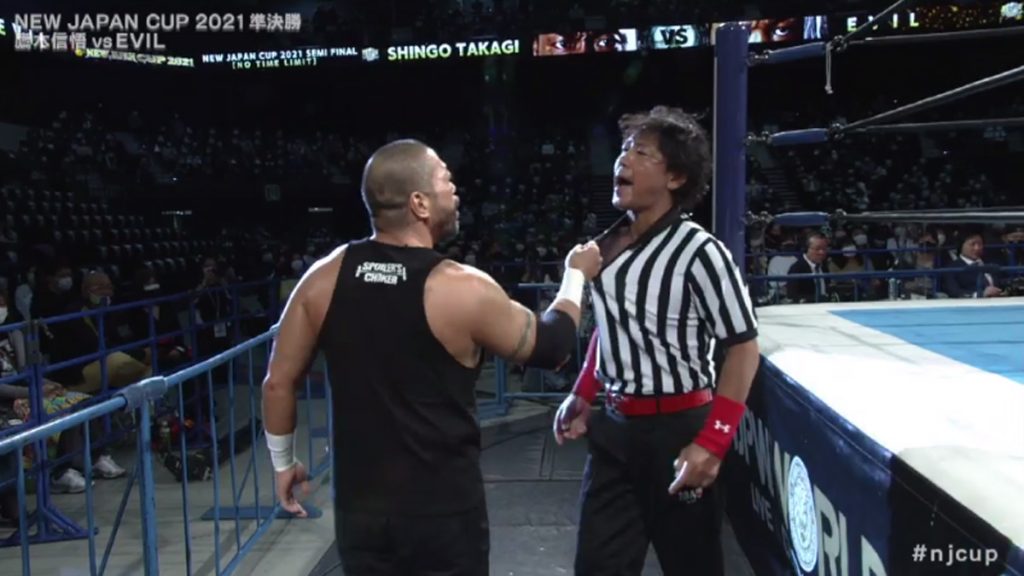 Red Shoes gets up close and personal with Dick Togo. Courtesy: NJPW.

Shingo takes Evil to the floor bouncing his head off a steel post. As he smashes Evil’s head off the apron Shingo points to Dick Togo as a warning. Shingo chases Togo around and into the ring. Evil catches Shingo with a clothesline. A snap suplex onto a pile of steel chairs has Shingo having to beat Red Shoe’s count back into the ring. Red Shoes issues a warning to Togo. Togo grabs Red Shoes by the neck of his shirt while Evil throws Shingo into an exposed turnbuckle. Evil pushes Shingo into Red Shoes who is then knocked out of the ring. Dick Togo attacks pummeling Shingo. Shingo picks up Togo for Made in Japan but Evil punches him in the “lower abdomen”. Togo and Evil team for a Magic Killer on Shingo. Togo rolls Red Shoes back into the ring. Shingo kicks out of Evil’s pin and as he does so Evil lands on Red Shoes. Shingo breaks out of Togo’s garotte to clothesline Evil and Togo down. Shingo pins Evil with Last of the Dragon.

David Finlay versus Will Ospreay

Bea Priestly is with Ospreay. Juice Robinson is with Finlay. Finlay has a real spring in his step and that throws Ospreay off. He keeps bailing out of the ring. Finlay goes after Ospreay on the floor. He shoves Priestly out of the way when she steps in front of Ospreay. A backdrop on the ringside barricade slows Finlay down. Finlay gets a two count with a Superplex. Things go terribly wrong for Finlay when he attempts his corner springboard stunner. Ospreay just pitches him over the top rope. Robinson rushes over to Finlay who is holding his ankle. Red Shoes checks on Finlay who cannot stand. From inside the ring, Ospreay demands Red Shoes make his count or perhaps call the match. The crowd tries to will Finlay on as he rises to his feet to beat Red Shoe’s count. Ospreay powerbombs him but Finlay kicks out. Although he can barely stand, Finlay keeps fighting on. With a Stormbreaker Ospreay finally advances into the finals.

In the finals we now have:

Will Ospreay versus Shingo Takagi