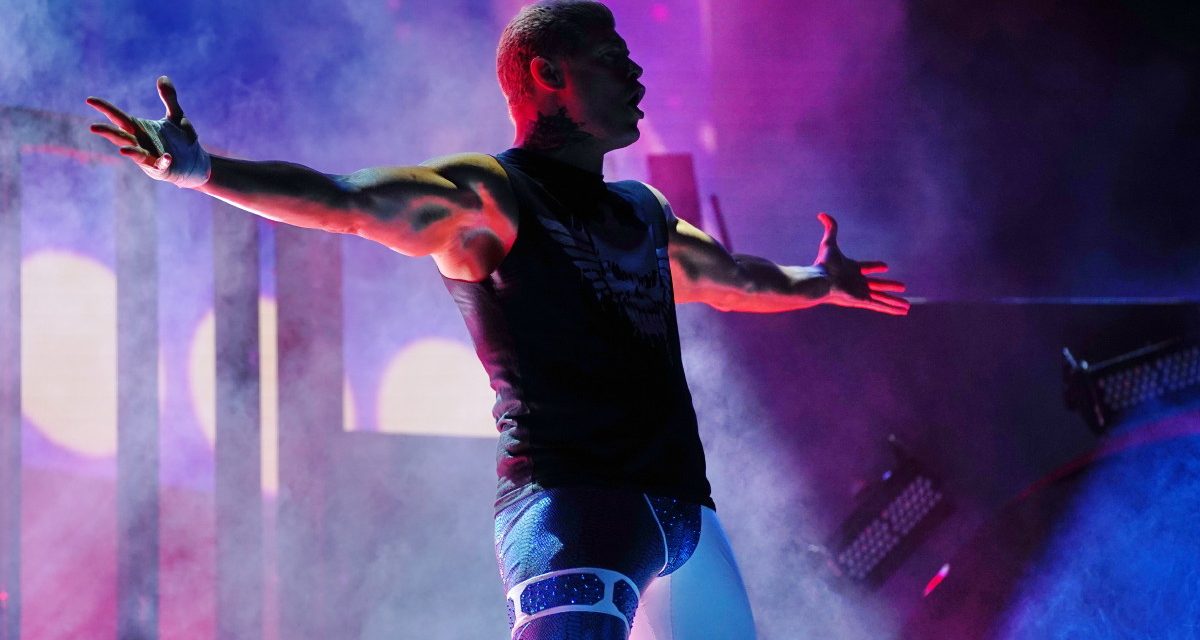 On an AEW media conference call on Wednesday afternoon, Cody Rhodes was forced into dual roles.

The veteran wrestler had to flip from being the headliner going into the opening match on tonight’s Dynamite, teaming with Red Velvet against NBA legend Shaquille O’Neal and Jade Cargill, to being Executive Vice-president of the company.

He started off by thanking his AEW team for providing “a bright spot for fans in these difficult times” through the pandemic. Later, Rhodes noted that AEW would not just start running in states that have opened completely, like Texas.

This Sunday is AEW Revolution, a pay-per-view that he promised “will be nothing short of spectacular.” After running down the card, the first question was about the Exploding Barbed Wire Deathmatch for the AEW World Championship, between champion Kenny Omega and former champ Jon Moxley.

Rhodes was well versed in the history of similar matches, mentioning FMW, Terry Funk, and, more recently, Matt Tremont. But he wasn’t as knowledgeable about what to expect.

“I don’t have a clue how the explosions will work,” he said. “I’m just as curious as everyone else.”

“Anything involving Kenny Omega is going to be unique,” he added.

Rhodes is on Revolution too, in a “Face of the Revolution Ladder Match” for the right to challenge for the TNT title, facing Scorpio Sky , Penta El Zero Miedo, Lance Archer, Preston “10” Vance or Max Caster, and another competitor.

But before that big show on Sunday, it’s AEW Dynamite tonight, with Rhodes starting off the show — come for Shaq, stay for the wrestling! 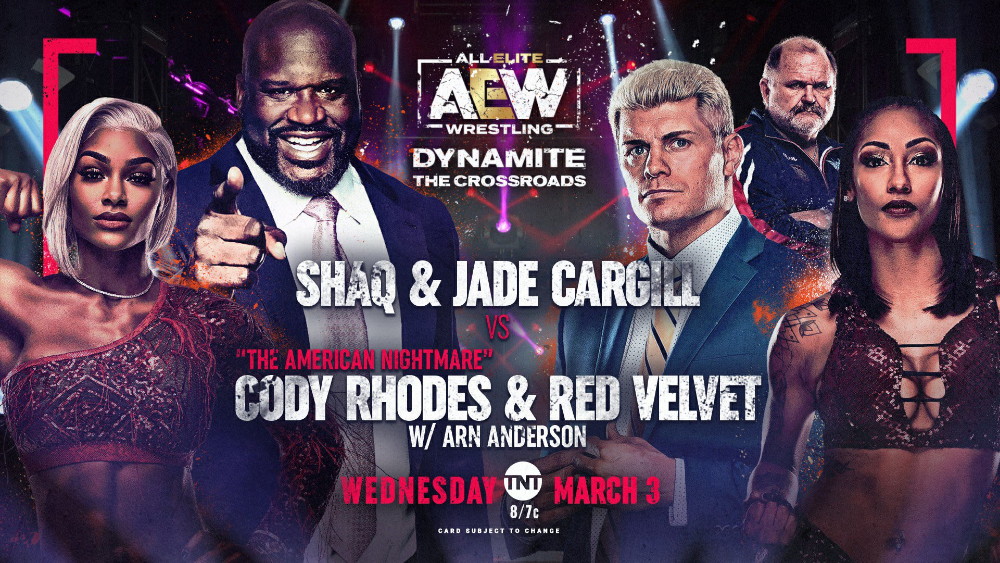 The celebrity bout was the subject of a few questions.

Rhodes was nothing but complimentary of Shaq. “He has a very large audience,” he began, praising the basketball star’s roles as a commentator and as an entrepreneur, a “model businessman.”

But Rhodes reminded everyone that Shaq is coming into his world. “I hope he’s ready,” he said. “I don’t think he has enough gas in the tank to compete with me.”

Shaq has been training — though not with Rhodes. “Shaquille O’Neal is very into wrestling,” said Rhodes, adding that they have talked about his fandom previously. To Rhodes, the idea is that a celebrity coming into pro wrestling needs to “respect the business.”

On his social media, O’Neal has already butted heads with football punter turned occasional wrestler Pat McAfee. Shaq promised that it will be a great match. “Hopefully it is the best celebrity match of all-time,” said Rhodes, who also hinted that Pat McAfee has been trying to get a job with AEW.

But why have it for free on AEW Dynamite and not the PPV?

“I think it fits just great on Dynamite,” defended Rhodes. The business model has changed, and as good as the PPV and streaming income might be, “television money is your bottom line” for the most part. Or, as he said at another point, “our job is to provide content to TNT.” 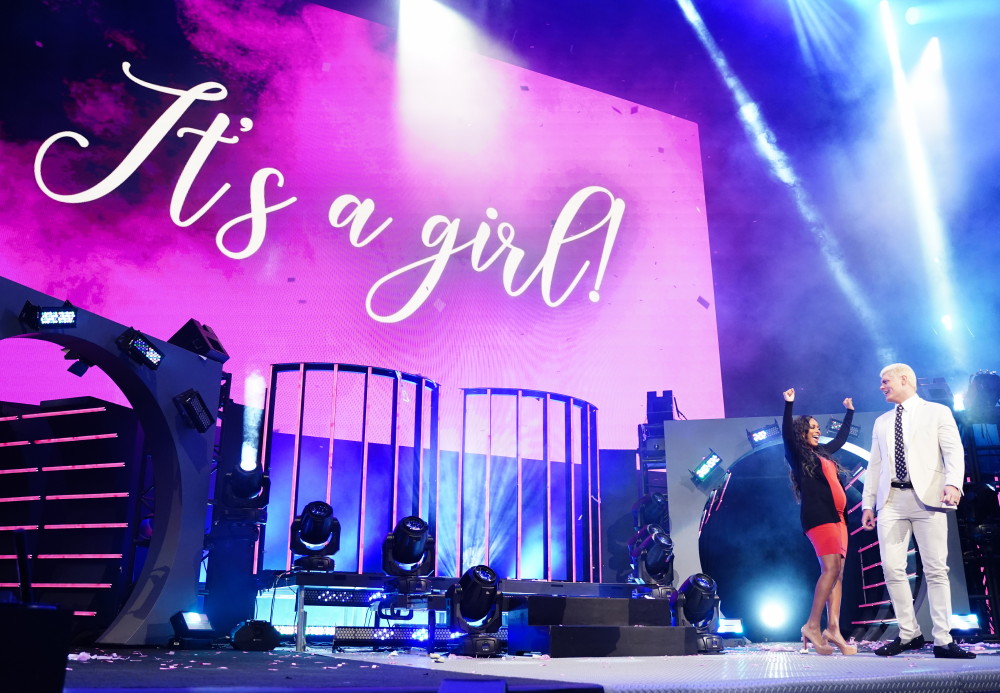 Brandi and Cody Rhodes did the gender reveal on AEW Dynamite on Feb. 10, 2021.

At no point did Rhodes dismiss the women involved. Originally, it looked like his wife, Brandi, would be in the match, but she is not competing, pregnant with the couple’s first child, a girl. He believes that Jade Cargill on Shaq’s team will shine, but he’s especially pumped to see what Red Velvet will do. He thinks she will emerge as a star, and, ultimately, an AEW contract.

“She has stepped up,” he said on Red Velvet. “She’s not a replacement at all, she changed the dynamic of the match.”

One questioner noted that Red Velvet is Latina, and Rhodes celebrated having a variety of colors and backgrounds in AEW. “It’s a beautiful thing to have diversity in your locker room,” he said, referencing old promoters just having a single minority in the territory. “The language of wrestling is universal.”

Going overseas, Rhodes praised his boss, Tony Khan, for his role in the AEW Women’s World Championship Eliminator Tournament, which concludes on Sunday. “Tony moved heaven and earth to make that happen” in Japan, said Rhodes. He was especially enamored with Maki Itoh, nothing that the “hardest thing to do in wrestling is to connect with the fans” and that she did, even in elimination.

“Tournaments are absolutely part of what we do,” he said. It’s the sixth tourney in the company’s young history. Rhodes sees is as a part of the “sports-based outlook” of the company, and noted the old Crockett Cup and King of the Ring tournaments. He suggested that there could even be a trios tournament down the road.

Another big hint came in regards to Paul Wight’s role. The former Big Show is scheduled to start with AEW on its new AEW Dark Elevation show as a commentator. Rhodes noted that the two have a lot of history, including a WrestleMania, and that Wight is “extremely” motivated.

“He wants to be here in a different capacity,” said Rhodes, expecting there will be matches. “He’s able to still go at a high level.” A bonus is what Wight can offer in the locker room, and he can counsel those who are emerging as stars. “Paul Wight has more to give.”

Similarly, having Sting in AEW is awesome. “Nobody was more of a little Stinger than me,” chuckled Rhodes, recalling the face paint he’d wear or the instant tattoo. He expects Sting to continue to be physical, and is looking forward to Sunday’s Street Fight with Team Taz (Brian Cage and Ricky Starks) (with Taz) vs. Darby Allin and Sting. “I want to make sure he’s happy … I think he’s in it for the long-haul.”

Some of Rhodes’ other answers, more VP than wrestler, were vague.

There has been talk of NXT moving to Tuesday and ending direct competition with AEW Dynamite (but against the YouTube AEW Dark show). Rhodes noted he anticipated the question and that fans would win. “I would love for us to be alone on Wednesday nights” but he acknowledges something else could fill the void.

Perhaps that could be the return of the NWA? “I definitely think we’ll see more cross-promotion,” Rhodes said as a generalization, noting the previous work with the NWA, Impact, New Japan, and AAA.

With AEW Dynamite, AEW Dark, AEW Dark Elevation already set, what’s to come? “I think all of our shows will end up with a different format,” noted Rhodes.