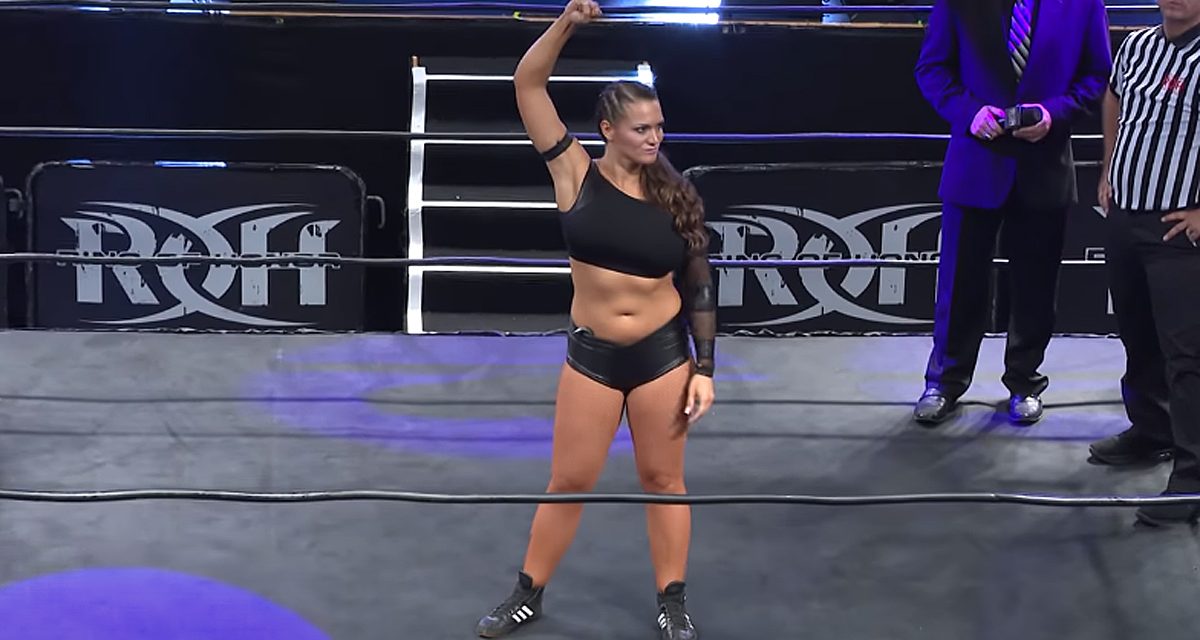 Kelly Klein has filed suit against her former employer Ring of Honor.

Klein is accusing RoH and its parent company Sinclair Broadcasting of breaching their contract with her, not paying her royalties, firing her for complaining about pay equity, had no safety or medical policies following her concussion, injuries and that they didn’t address the sexual harassment she suffered at the company.

Klein is seeking $75,000 for her medical bills, lost wages, lost earning potential and “annoyance, aggravation, inconvenience, loss of enjoyment of life, emotional distress; mental anguish” she claims to have suffered.

Klein’s accusation against Jay Lethal is that:

“Klein was in a hot tub near the pool of a hotel where the wrestlers were staying the night before an event, Shipman approached Klein and, while leering at her in a way that made Klein uncomfortable, started harassing her by asking her questions about whether her boyfriend was there, if she was staying in the hotel alone and how long she would be at the hotel. Shipman’s behavior made Klein very uncomfortable.”

Klein alleges that even though she reported the incident to the company it was never investigated and Lethal was assigned as an agent to work with the female talent.

“Klein responded to the e-mail and explained that she had witnessed and experienced several situations with Shipman that made her uncomfortable to work with him. She advised ROH management that she was not willing to work with Shipman and requested that another agent be assigned to her matches. Klein went on to explain that she had not expressed this sooner for fear of backlash or retaliation,” states the suit.

The suit also details Klein’s injuries. Klein maintains that even though she suffered a concussion when her head and neck hit a steel guard rail in one match, was kicked in the head causing another concussion during another, suffered other concussions and also broke a tooth, that her concerns about “female wrestlers did not feel safe in the wrestling ring with women wrestlers who were reckless and not properly trained” were also never addressed.

In the filing, Klein alleges that RoH and Sinclair Broadcasting discriminated against her “on the basis of her sex by paying her compensation that was less than were paid to male wrestlers despite the fact that the performance by male and female wrestler requires equal skill, effort, and responsibility, and are performed under similar working conditions. The disparity in the rate of pay violated federal and state statutes prohibiting discrimination in pay rates based upon sex.”

Klein also recounts a meeting that was held between RoH and the female talent.

“A meeting between the female wrestlers and ROH management occurred. Todd Sinclair, Koff, Riccaboni, and Johnston were present. The discussion centered around the disparate treatment between the male and female talent of ROH despite the success of the female division of ROH. Specifically, the female talent discussed the lack of storylines; the way women were portrayed; the amount of television exposure, and why they were not being represented more in the marketing of the show. Management advised the female wrestlers that there was not enough time on the show so management was forced to think outside the box, producing YouTube content and social media marketing regarding the female talent.”

“Now that the cat is out of the bag. Yes, my wife @RealKellyKlein was fired by @ringofhonor COO Joe Koff, via email Tuesday evening. Not a phone call, an EMAIL. Kelly is still very much suffering from Post Concussion Syndrome and was fired while still injured,” he wrote at the time.

RoH responded by stating: “We don’t generally discuss personal issues but they seem to have made it public – we didn’t fire [Kelly Klein], we just notified her that we would not be renewing her contract.”

RoH has not responded or commented publicly on the suit.