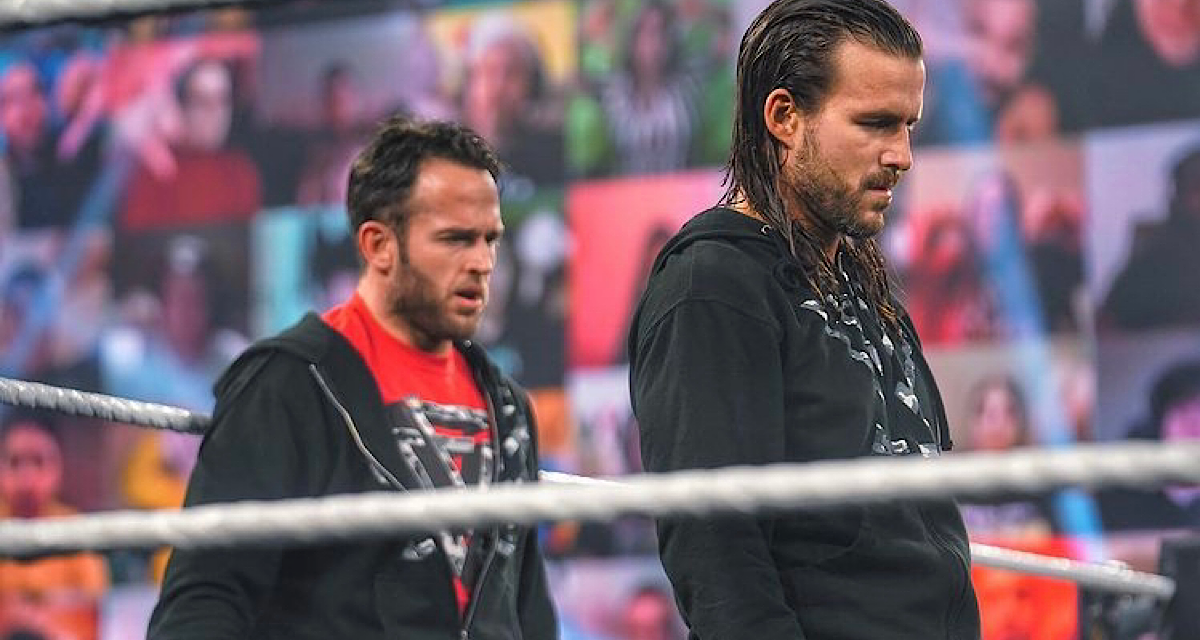 February 14th is usually a day marked by love and affection, but for NXT, it stands for vengeance and implosion. The Undisputed ERA faction was NXT’s backbone for many years, but following Adam Cole’s unforeseen attack on stablemate Kyle O’Reilly in tonight’s closing moments, the group is supposedly no more. Possibly the final time together as a unit, the system has once again been shocked.

Unlike the opposing duo, Blackheart and Moon enter together and debut new entrance music, but are however unsuccessful in taking down the powerful Gonzalez. They eventually gain control over Kai and target the leg until Gonzalez receives the hot tag, powerbombing Blackheart into the plexi-glass. Moon carries the team herself though, single-handedly taking out the opposition and delivering the Eclipse for two before Blackheart recovers; she dives onto Kai ringside and assists with a Tower of Doom. After Kai’s GTK and some near falls, Gonzalez throws Moon onto and off the elevated ramp, thereafter slamming Blackheart in-ring for the decisive three-count victory.

The Way accompanies Gargano through the curtain but one member doesn’t make it; Austin Theory was secretly taken out by Dexter Lumis in the background, meaning the champion goes it alone here tonight. Kushida initiates his usual limb-targeting offense, and Gargano keeps up; the comedy relief Gargano’s been doing recently has evidently overshadowed his top-notch abilities finally on display again. The challenger takes hold of Gargano’s left arm, but the latter reverses to gain control, eventually trading quick pinfall attempts and strikes. It’s a technical showcase between these two going reversal-for-reversal as Gargano’s left arm dictates this grappling chess game. He applies the Gargano Escape, Kushida rolls through with the Hoverboard Lock but succumbs to the Lawn Dart. The challenger delivers the top-rope armbar after his second attempt, but Gargano retreats ringside and ultimately hits One Final Beat onto the ramp and another in-ring to retain.

That was a fast-paced contest that even mat-game enthusiasts can appreciate too. Fantastic stuff, reminding everybody that neither competitor should be slept on. It’s probably NXT’s best match of 2021 yet, although tonight’s main event will likely provide some competition.

A brief highlight package revisits the tournament’s previous rounds before GYV’s Zack Gibson cuts one last pre-match promo. He’s clearly infatuated with sticking things — in this case MSK’s smiles, flips and whatnot — up his opponents’ arses and reiterates it again tonight. MSK’s Nash Carter gains control for his team — with a Bronco Buster, speaking of arses — as Wes Lee delivers a Sasuke Special variation. Gibson takes out Carter though, and GYV dominates once again cutting the ring in half. Lee eventually makes the fiery comeback and spectacularly dives over the top turnbuckle onto the floor, later hitting a Pele kick for two. For another two, Gibson foils the double-team attempt and reverses the second Pele as James Drake connects with a 450. After the pretty-but-nonsensical assisted flip, effective Frankensteiner and Spiral Tap from MSK, Drake kicks out yet again. Commentary mentions a stunned silence from the audience, but it’s more likely from near-fall exhaustion. Finally, Carter hoists Drake up, and Lee delivers the assisted flip hangover for three.

MSK celebrates with fanfare, an emotional victory for both competitors. Much like the sparkling pyro and shiny trophy, MSK’s future looks bright; they are the official 2021 Dusty Rhodes Tag Team Classic winners.

NXT’s newfound rich Carolinian Cameron Grimes has a vignette showing off his Gamestop money in a music video basically, rapped by Josiah Williams. One line references Grimes’ promo last week saying “kiss my grit”, and considering how good it was, NXT should really consider.

Martinez attacks the champion before introductions begin, and a brawl immediately commences. Nobody claims early dominance in this demolition derby, although Martinez gets in some considerable offense. She reigns supreme atop a double submission and Germans her opponent before Shirai connects with a Tiger Feint, dropkick and top-rope stomp to level the playing field. Possibly a first, while Storm tries to disassemble the announce table, the hand motion and scuffling alone makes it collapse. Oops! Nevertheless, Shirai appears atop the lighting rig and dives onto the mass which would’ve had greater effect if not done two weeks earlier by somebody else. Martinez delivers a fisherman buster, and Storm hits Storm Zero followed by a diving headbutt. But capitalizing off the impact and pinfall attempt, Shirai delivers the top-rope Moonsault to retain her championship.

The signing wasn’t revealed online until during the TakeOver Kickoff show, so seeing him interrupt the panel was a pleasant surprise; Eli Drake is NXT! Footage from earlier today shows him signing with General Manager William Regal. He thankfully hasn’t signed away that natural charisma and gift of gab but has however gone through a name change. The former Eli Drake is now LA Knight.

The competitors aggressively lock up and wrestle through snug chain positions with Balor continuously getting the one-up. Commentary says, “This is oldschool mat grappling at its best.” Dunne switches the momentum with vintage joint manipulation until Balor stomps the toes and targets the left knee. It’s been straight grappling so far, which is apropos considering the two talents, but second gear would be greatly appreciated at this point. Dunne initiates the striking game after finally delivering a suplex variation, but Balor again attacks the left knee, following with a closeline. Balor clubs the challenger while applying a facelock until Dunne jams his fingers to reverse. He stomps the face and delivers a powerbomb, but the left knee comes into play again. Balor capitalizes with the corner dropkick but cannot connect with Coup de Grace as Dunne catches an arm triangle, knocking him loopy as the fingers are snapped. Dunne at last delivers the Bitter End for two and continuously stomps the fingers, but Balor fights through with 1916 and removes the mouthpiece, kicking him squarely in the face. Coup De Grace connects, and 1916 finishes it off. Balor retains the NXT Championship after another technical war!

The night isn’t over with as goons Oney Lorcan and Danny Burch blindside the champion. It’s a three-on-one assault before the Undisputed ERA makes the save, and former adversaries Balor and Kyle O’Reilly exchange their respects. Before the bottom third signals the end, Cole objects with a superkick to both Balor and O’Reilly! Cole walks off leaving Roderick Strong bewildered, O’Reilly downed and the Undisputed ERA in shambles.

Two match-of-the-year contenders were presented, and they’ll likely be overshadowed by the biggest NXT heel turn in recent memory. The Undisputed ERA split was bound to happen sometime, and that moment happened tonight; Cole was the bad apple. However, no bad apples were matches on tonight’s card, although clearly the two men’s championship bouts stood way above the rest.