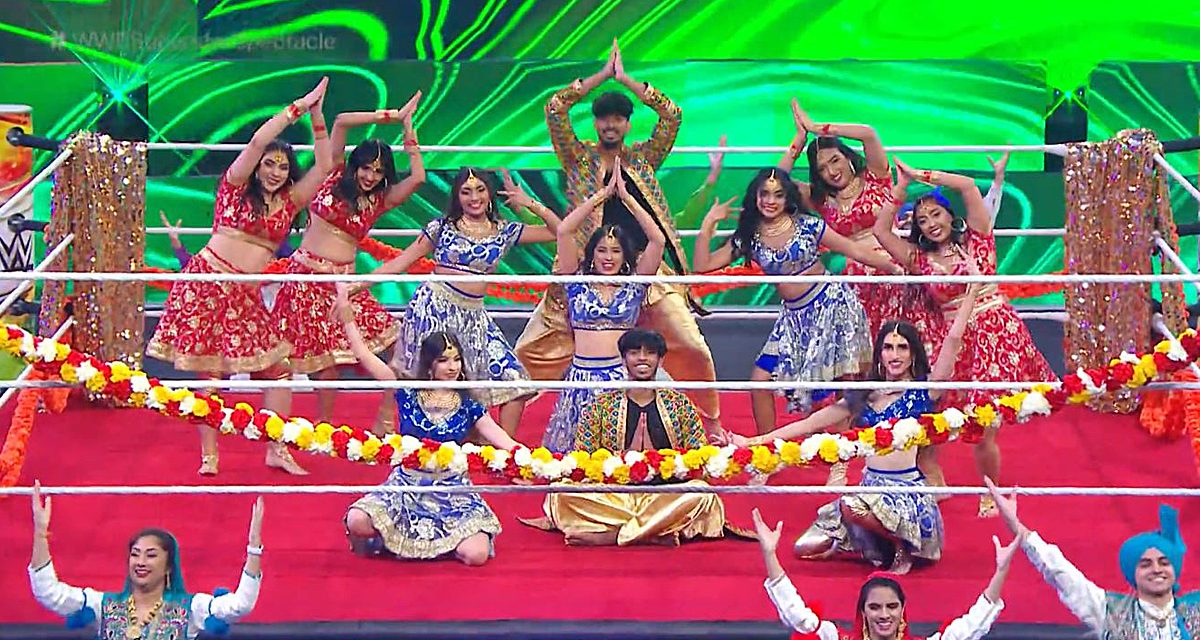 The WWE honoured India, its talent, culture on Republic Day with the Superstar Spectacle on the WWE Network. Since there are travel restrictions due to the pandemic, the event was held in the WWE Thunderdome at Tropicana Field in Florida.

For the most part, Spectacle saw big name WWE stars team with the new faces of WWE India in various tag team matches, the main event being Jinder Mahal and The Bollywood Boyz versus Drew McIntyre and Indus Sher. Not many of the angles made much sense based on the current storylines in the WWE but if you could overlook those inconsistencies you were treated to some decent matches.

Jinder Mahal celebrated his return from injury by interrupting Ric Flair who was wishing everyone a Happy Republic Day. 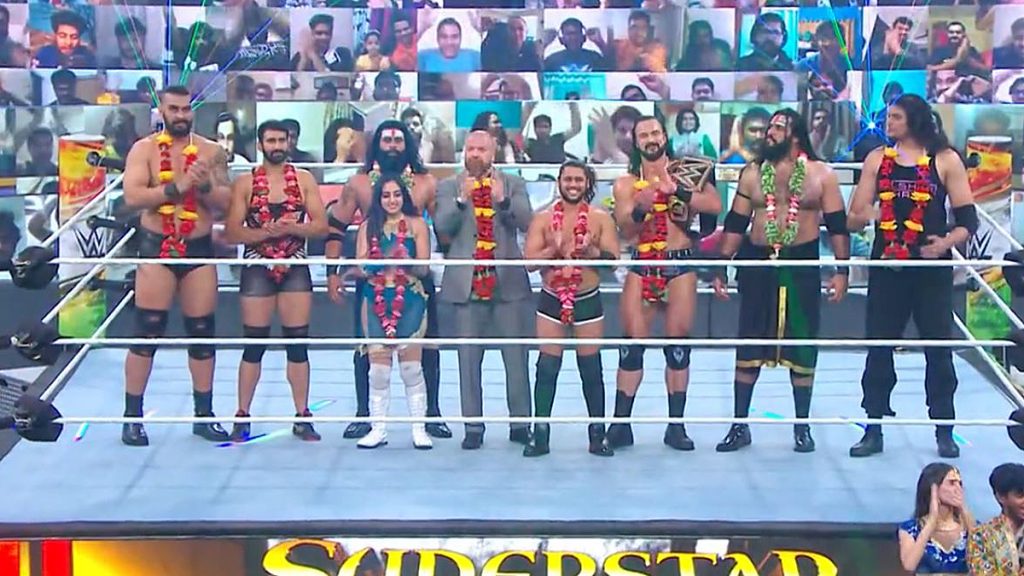 “If there is one thing we should be celebrating it is the return of the Modern Day Maharaja!” said Mahal.

“Jinder Mahal, my old buddy. Welcome back. Nobody is happier to see you than me, mate,” said McIntyre as he blasted Mahal for cutting off The Nature Boy and making the event all about his return, which it definitely was not and shouldn’t be.

Mahal’s tough talk doesn’t match his actions as he ducked out of starting the match against McIntyre. Samir is whipped all over the ring by a rambunctious McIntyre. Indus Sher double teams Samir hanging him over the ropes and delivering a running boot to the head.

“What a great year he has had,” says Michael Cole of McIntyre. 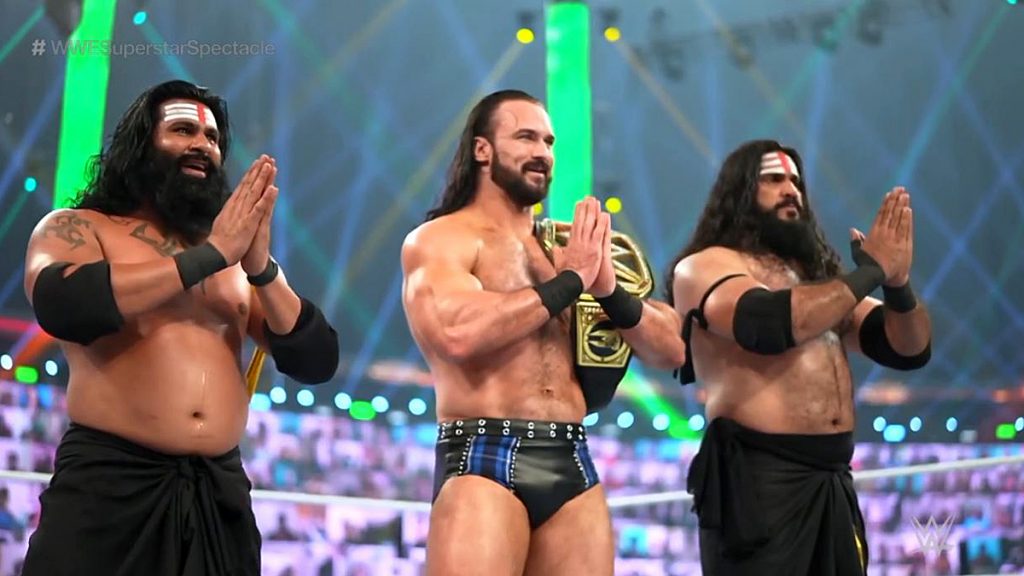 Mahal chews out his former valets. Mahal turns the momentum in his team’s favour. It doesn’t last for long though. McIntyre hot tags in steamrolling over everyone.

Sunil is all on his own. Indus Sher finishes things off with their version of Demolition’s Demolition Decapitation.

Raaj looks to be a phenomenal talent. One wonders why he hasn’t been on WWE television proper, like NXT? Especially impressive is Raaj’s martial arts skills and agility. He has a bright future for sure. Balor wins though with 1916. Balor offers Raaj a hand up afterwards, congratulating him on a decent effort and match.

The massive Giant Zanjeer and Dilsher Shanky tower over Ricochet and Mysterio. The match doesn’t make much sense since Cesaro and Nakamura seem to be turning their backs on the likes of Corbin and Ziggler on Smackdown recently. Shanky tosses Ziggler, Nakamura around like a small children cornering them early on. Zanjeer splashes everyone but Cesaro in one of the corners while Mysterio, Ricochet just look on. Once Mysterio is tagged in he is swarmed by Cesaro and Nakamura. The heels cut Mysterio off from the allies in his corner. Ricochet does a little Bollywood dance to taunt the opposition. Cesaro floors Ricochet and does his own dance. Once Shanky and Zanjeer enter the ring, the giants clear it in seconds. At his instance, Zanjeer picks up Ricochet and launches him over the ropes and onto the arena floor where the heels are waiting to get bowled over. Mysterio climbs on the shoulders of Shanky and splashes Cesaro for the pin. For some reason, Shanky is permitted to pin Cesaro along with Mysterio. A very fun match.

Jeet is a veteran grappler from India who tests AJ’s technical skills. AJ takes a short cut dumping Rama on the floor and splashing him. Rama seems overwhelmed at first but goes back to his basic skills to confuse Styles pitching him around with a series of German Suplexes. Styles avoids disaster on the top rope as he takes Rama’s legs out from under him. Rama comes crashing down hitting the ropes, turnbuckle as he takes a nasty tumble. Rama is locked in the Calf Crusher for a very long time. He doesn’t submit though. He breaks the hold by slamming Styles’ head on the canvass over and over again. Omos interferes from the floor. He holds Styles by the trunks so that Rama cannot suplex him off the second rope. Rama, takes another spill. Styles puts out Rama’s lights with the Phenomenal Forearm.

The New Day and the Street Profits introduce Spinning Canvas, a colourful Indian dance troupe who perform for everyone outside and inside the ring. The Great Khali wishes everyone a Happy Republic Day as well.

Sareena Sandhu and Charlotte Flair versus Bayley and Natalya

Not sure why Bayley and Natalya would team up but…what the heck. Sareena is the odd woman out sharing the ring with such WWE veterans. Charlotte is wearing the colour of the Indian flag in the ring. Sareena has a great moment as she splashes both Bayley and Natalya from the top rope. “Are you kidding me? Who do you think you are?” Natalya shouts at Sareena. Natalya gives Sareena a kick out of the ring so that Bayley can give her a chop block on the floor. Sareena is isolated and has to endure the punishment by the heels. Charlotte cleans Bayley’s clock with a running boot to the face on the floor. Natalya has Sareena locked in the Sharpshooter. Charlotte hits Natural Selection and Sareena rolls up Natalya for the victory.

Ric Flair comes down to the ring. He talks about how the WWE brings the world together and he too wishes everyone a Happy Republic Day.

A historic WWE event to be sure and a great step forward for wrestling in India and the talent they have there. The card was fine but not really exceptional. The vignettes introducing each new star were informative but sorry, WWE, not everyone’s gimmick or persona can be they are doing it all for their family.