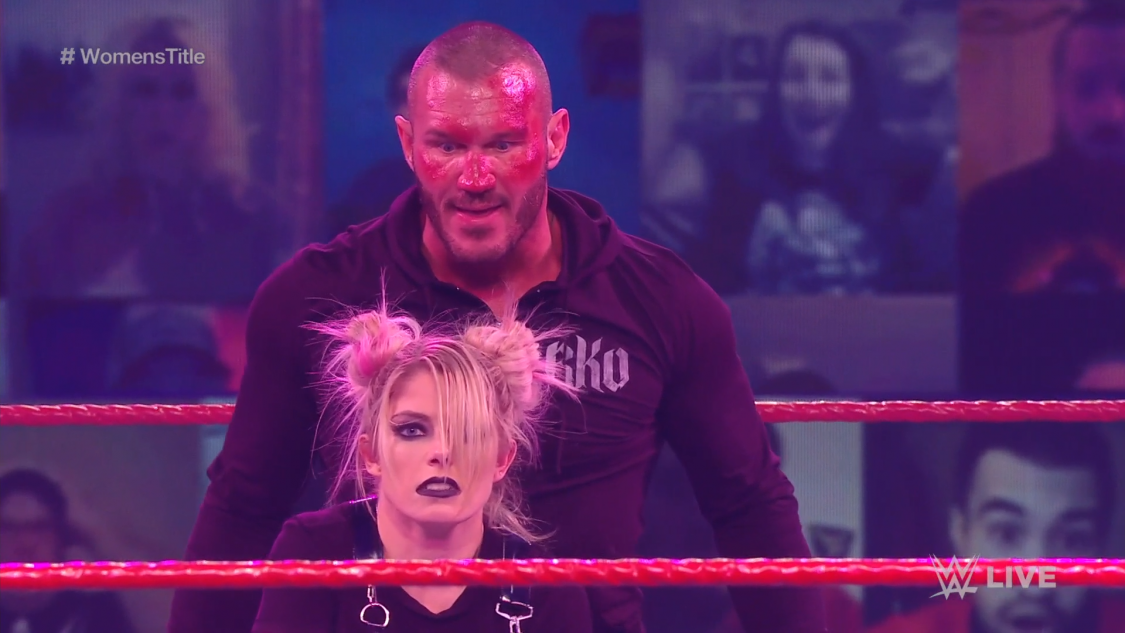 The Royal Rumble is this Sunday and the big question is, at least for me, is will the WWE pump in the sound of the crowd counting down from ten when a new superstar is ready to enter the match. RAW has their part of Sunday’s card set, although we could have a new women’s champ heading into the weekend as Alexa Bliss is taking on Asuka tonight. Let’s head into the ThunderDome

Drew McIntyre has returned to the ThunderDome! The WWE champ heads to the ring to have a face to face encounter with Goldberg. Drew thanks the WWE Universe for their support after his COVID diagnosis.  He then sets his sights on Goldberg, who has now beaten every champion he has faced since he returned to WWE. It won’t happen this Sunday, though.

The Miz and Morrison interrupt the champ. Miz knows there’s a chance McIntyre or Goldberg could get injured and the winner of the match could be a sitting duck. Then he will cash in the Money in the Bank.

Goldberg finally makes his entrance, telling McIntyre ,”You’re next!” Miz and Morrison try stoke the flames, so Drew and Goldberg just take them out instead.

Backstage, Charly Caruso asks Charlotte Flair about her upcoming match with Shayna Baszler and what is on her mind. Flair says she thrives under pressure, as she is pulling double duty on Sunday. She will defend her tag team title and enter the Royal Rumble Match. She says that her father will not be a distraction.

Flair takes a shot at Jax with a baseball slide. she connect wit a big boot to Baszler and locks in the Figure Four. Jax runs in with a leg drop and the ref calls for the bell. Mandy Rose and Dana Brooke run down to make the save.

We join the match in progress, as Evans is double teamed by Rose and Brooke with a suplex. Flair and Baszler tag in, with Flair lighting up her opponent with chops. Flair goes up and over in the corner, landing on the apron on her feet. She drags Baszler out of the ring to the floor. Baszler in unable to beat the ten count and the ref calls for the bell.

After the match, Baszler has a discussion with the referee.

During the commercial, the match was restarted after Flair and company agreed.

Dana Brooke gets worked over the corner by Baszler. Jax tags in, as Shayna stomps the elbow. Dana looks for a sunset flip, but can’t get Jax over. She is able to dodge Jax trying to squash her though. Rose tags in; hitting Evans with a pump knee strike.  The match starts to break down, with Evans yanking Flair out. Charlotte stares Evans down. Lacey takes off and Flair gives chase. In the ring, Jax yanks Brooke off the top rope to the mat. She picks Brooke up and chokes slams her. She follows with a leg drop and covers to get the win.

Mustafa Ali tells Kofi and Xavier that he is their reminder of reality. Ali explains to Kofi, and us, that he is coming for him because Kofi’s best moment came at Ali’s expanse. Kofi-Mania was supposed to be Ali’s spot.

When Woods starts to gain the upper hand after hitting the Honor Roll, T-Bar leaps to the apron. Slapjack with a roll up off the distraction, but Woods rolls through. He hits a shining wizard and covers for the win.

After the match, Woods is jumped by T-Bar and dragged back into the ring. Ali calls for a chair, but stops short from striking Woods. Instead he takes a seat and lectures Woods. He wants Xavier to deliver a message; Kofi will not be in the Royal Rumble as Ali has replaced him.

Riddle runs into R Truth backstage. Truth thinks the Hurt Business will be throwing him a surprise party. Truth overhead them talking about a surprise during the VIP Lounge.

MVP can’t wait for the Rumble after party; it’s gonna be lit. MVP warns the boys about not taking Riddle lightly, tonight. They need to focus on the task at hand. Lashley wanted to have this space to talk about all they have done. Cedric interrupts Shelton to praise MVP. Lashley presents MVP with a gold chain with THB (The Hurt Business) hanging from it.

R Truth crashes the Lounge and he is ready to party. Cedric tells Truth that this has nothing to do with him. Lashley invites Truth to comes to the ring to get his gift. Several WWE Superstars run down the ramp to win that 24/7 title off Truth. During the commotion, Riddle runs into the ring and hits MVP with a flash knee strike.

Backstage, Truth tells Adam Peirce that he wants an opportunity to win the Money in the Bank. AJ Styles translates; Truth wants to be in the Royal Rumble. Peirce will let Styles face R Truth and if Truth wins he will consider his entry into the Royal Rumble.

Miz tries to provide a distraction to prevent Sheamus from going up top. Miz slows him down enough, allowing Morrison to kick Sheamus out of the mid air. Morrison with a dragon screw leg whip, but can’t get the pin. Sheamus breaks out of a knee bar, but Morrison puts on a shin lock. Sheamus catches Morrison out of mid air, slamming him to the mat, but he can’t get the pin. Sheamus locks in the cloverleaf. Morrison is able to get to the ropes. Sheamus with a knee strike and delivers White Noise. He covers for the win.

After the match, Miz challenges Sheamus to a handicap match. Sheamus accepts.

Sheamus vs. The Miz and Morrison – 2 on 1 Handicap Match

Sheamus can’t over come the odds in this match. Sheamus hits Morrison with a Brogue Kick, only to have Miz hit him with a Skull Crushing Finale. Miz covers Sheamus to get the win.

Winners via pinfall: The Miz and Morrison

In his locker room, Ric Flair and Lacey Evans are practicing wrestling holds. Charlotte interrupts; wanting to talk to her dad. Ric tells his daughter that he is always going to be him. Charlotte tells Ric that she isn’t the bad guy, in fact, she is the only one protecting him. Evans sucker punches her, leaving her laying.

Truth is absolutely befuddled by the size of Omos. Styles whips Truth hard into the corner, sending him crashing to the floor. Styles tries to send Truth over the top rope, but Truth counters and Styles hits the floor. AJ runs back into the ring, slamming Truth onto the apron and face to face with Omos. Truth scurries into the corner. He ducks the Phenomenal Forearm and slams AJ into the mat. Truth with the 5 knuckle shuffle, but misses the scissors kick. AJ counters the Attitude Adjustment into the Calf Crusher. Truth taps out.

Alexa Bliss is on her swing set in the back. She’s still talking to the empty swing and she is quite proud of her work with Randy Orton. For the record, she just wanted to have fun with Asuka, but the champ didn’t want to play nice. He taught Alexa her tricks and she can’t wait to see him again.

Shelton Benjamin is the first man up. Riddle lands on his feet after a suplex, but Benjamin blocks a knee strike and drives Riddle into the mat. Benjamin looks for the Olympic Slam, but instead sets Riddle up on the top turnbuckle. A knee strikes sends Riddle to the floor. Benjamin rains down shots. He follows with a knee strike and goes for a pin. Riddle kicks out and is able to lock in a guillotine. Benjamin is able to break free, but catches a knee. Cedric with a distraction to the ref, as Benjamin has a pin. MVP yells at Alexander to do nothing. Riddle takes advantage of that distraction and rolls up Benjamin for the pin.

MVP tries to mediate Benjamin and Alexander. Riddle rolls up MVP and locks in a heel hook. MVP taps.

Riddle hit a German suplex, but Cedric answers with a brain buster. Alexander goes up top, but Riddle rolls away. Riddle looks for a triangle choke, but Cedric counters with a power bomb. Riddle catches Alexander with a roll up and gets the pin.

After the match, Bobby Lashley attacks Riddle at the top of the ramp. He cinches in the Hurt Lock.

Edge is back! Well, back on video. 2020 has taught him not to sleep on anything and nothing is guaranteed. It took nine years for Edge to get his dream back.  Long story, short; Edge has  officially entered the Royal Rumble match.

Bliss is here to play, smiling and toying with Asuka. Bliss with a go behind and Asuka kicks her in the midsection. Asuka tosses Bliss across the ring, into the corner. The champion leaps out of the corner and connects with a dropkick. Asuka is sent to the floor. She looks up to find Bliss riding a rocking horse in the middle of the ring. We go to commercials.

After the break, the horse is gone and Asuka is beating Bliss in the corner. The champ misses a drop kick, allowing Bliss to make a cover. Asuka kicks out. Alexa stomps Asuka into the corner and applies a head lock. The champ gets to her feet and kicks Bliss in the face. Asuka with a hip attack in the corner, followed by a German suplex. A kick to the face doesn’t keep Bliss down, though, as she kicks out of the pin. Bliss is down in the corner, almost crying, as her original music starts and fades out. She is now also wearing her original ring gear. Asuka is confused, but charges. Bliss drops her into the middle turnbuckle. Alexa goes to the opposite corner, facing away from Asuka. The ThunderDome goes dark. The lights come up with Evil Alexa Bliss, dressed all in black. Bliss fends off every attack from Asuka. A knee to the face doesn’t faze her. The champ goes for the Asuka Lock, but Bliss over powers her. Alexa locks in the mandible claw.

Randy Orton pops up out of nowhere, and delivers an RKO to Bliss. The show goes to black. So, at some point we lost the referee during this match. I guess this is a no contest.  Enjoy the Rumble this Sunday, see you next week in the ThunderDome!

It’s a good thing the Royal Rumble sells itself with the Royal Rumble match, because WWE did nothing tonight to convince anyone to buy the show on Sunday. Their were multiple matches that were then continued as a multi-person tag match or a handicap match. Is the roster that shallow right now? On the other hand, the Asuka/Alexa Bliss match was entertaining and did surprise in the end even with out a title change.