Larry King and his wrestling connections 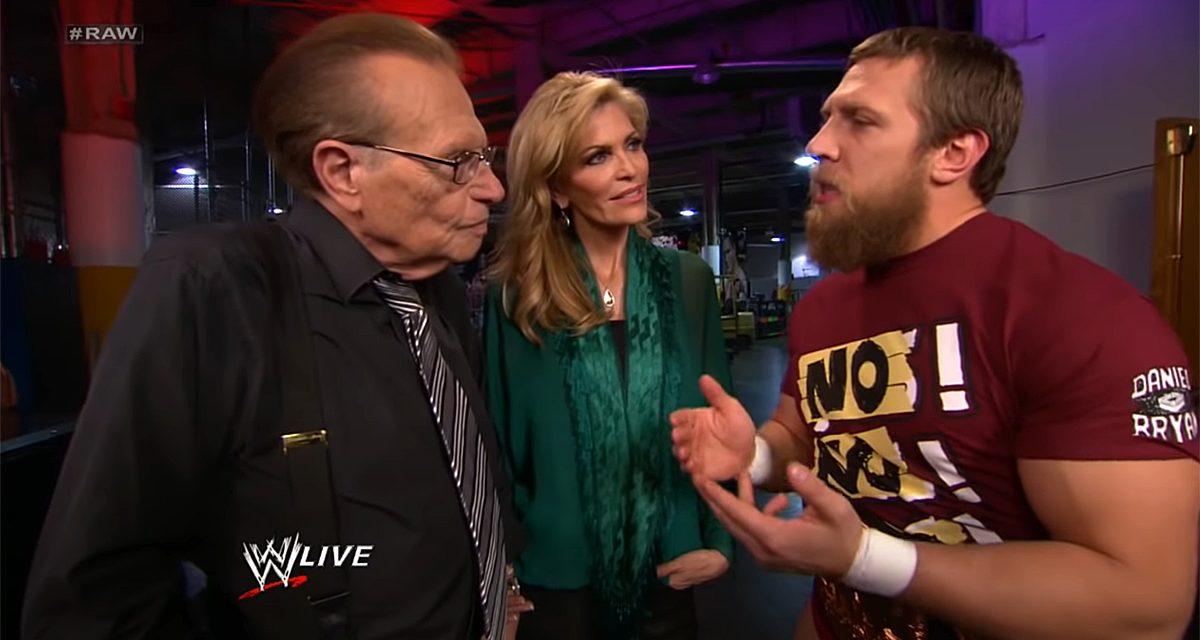 Larry King, the long-time television and radio host, has died at the age of 87. His accolades and accomplishments in broadcasting are legendary and for the longest time, he was perhaps the biggest name on CNN.

The Brooklyn, NY-born Lawrence Harvey Zeiger began his career in 1957, working in newspapers, as a disc jockey, and progressing from there. The Associated Press estimated he conducted more than 50,000 interviews — from politicians to rock stars, from conspiracy theorists to shy authors. Most recently, King had a YouTube series called Larry King Now.

But here we will talk about his connections to pro wrestling.

It turns out he was a long-time fan.

“They are incredible athletes, their fan following is amazing, but their results are never in the paper,” King told Sports Illustrated in 2018. “I remember watching Antonino Rocca from Argentina bang off the ropes and jump into the air, and it was incredible what wrestling was to early television. Pro wrestling and [early TV star] Milton Berle made early television.”

Pro wrestlers appeared on his talk shows often, but it went the other way too.

On October 8, 2012, Larry King was the guest host for WWE Monday Night Raw, along with his then-wife Shawn Southwick King. (King’s many marriages are another whole story.)

King liked pro wrestlers on his shows because they were lively, could react, and weren’t interviewed in dozens of other places, like many celebrities out promoting movies, TV shows or books.

He asked the tough questions when Owen Hart fell to his death in May 1999, and when the Chris Benoit double murder-suicide happened in June 2007, King was a journalist and not a fan, grilling the likes of Chris Jericho and Bret Hart.

King was not afraid to ask tough questions. On the March 26, 2008 CNN show, he asked John Cena about performance enhancing drugs.

KING: Are you very concerned about that problem, John?

CENA: No, not at all. I think as far as, you know, performance enhancing or any drugs go, it doesn’t come down to what you do for a living. It’s all a matter of personal choice. And I think the WWE does a fantastic job maintaining the integrity of the company and helping the talent if they do come forth with a problem, whether — if they’re active or non-active.

On the same show, he asked Hunter Hearst-Helmsley something similar.

TRIPLE H: No, I don’t. When I took painkillers — I’ve torn both my quads before. I think I took painkillers for about two days afterwards. I can’t stand them. And that goes to what John said to me. Anybody that talks about — you know, I’ve heard other guys say oh, the wrestling industry, you have to do it to make it through it. It’s a load of crap, because I know more guys that don’t take anything than do take stuff. You know, it’s a personal choice.

Two decades before, King gave former WWWF champion Bruno Sammartino a platform to talk about steroid use in pro wrestling. In a 2005 interview with Michael Strider, Sammartino noted the opportunity he got through the talk shows.

“In the late 1980s I started being very outspoken about it because I saw guys like Quick Draw McGraw were dying and I knew that drugs were involved so I started complaining about it. I knew it was happening with this business and I went on television shows like Geraldo Rivera, Donohue and Larry King Live to talk about these things. Unfortunately I was a lonely voice and it didn’t bring on a drastic changes. Because of this I became the ‘bad guy’ to others in the business. I didn’t care and I hoped that some kind of action would be taken by the state athletic commission to start testing but because I was by myself nothing happened.”

King was not a loyalist to any company, evident particularly when World Championship Wrestling was under the same corporate umbrella as CNN, yet King could bring on who he wanted.

The wrestlers seemed more comfortable around King than other journalists that did not have an appreciation for their unique skillset.

Hulk Hogan appeared on King’s shows many times, including shortly after Hogan’s son, Nick Bollea, then 17, was in an accident driving recklessly, crippling his passenger, John Graziano. An out of character Hogan is a rarity, and his guard was down for King.

KING: Hulk, he did wrong, did he not?

H. HOGAN: Yes. Well, he made a mistake and he’s accountable. And he stood up in front of the judge and accepted, you know, his sentence and was responsible and accountable for the situation. And what most people, you know, don’t realize is Nick did not leave my home that day ever planning on anyone being hurt or any intention of anything happening.

John and Nick were best friends. John was living with me at my house. We’ve been — John pretty much has been part of our family unit since he was 17 years old. He had clothes in our home in L.A. and in Florida and when we moved to Miami, his stuff was there.

So, we took him on trips and vacations with us. So John was like an extension of my family unit. So in no way ever did Nick ever intend for something hike this to happen. It was an accident, Larry.

King died on Saturday morning, January 23, 2021. He had had countless ailments through the years — diabetes, prostate cancer, a heart attack followed by quintuple-bypass surgery, and, in 2017, a malignant tumor was removed from his lung.