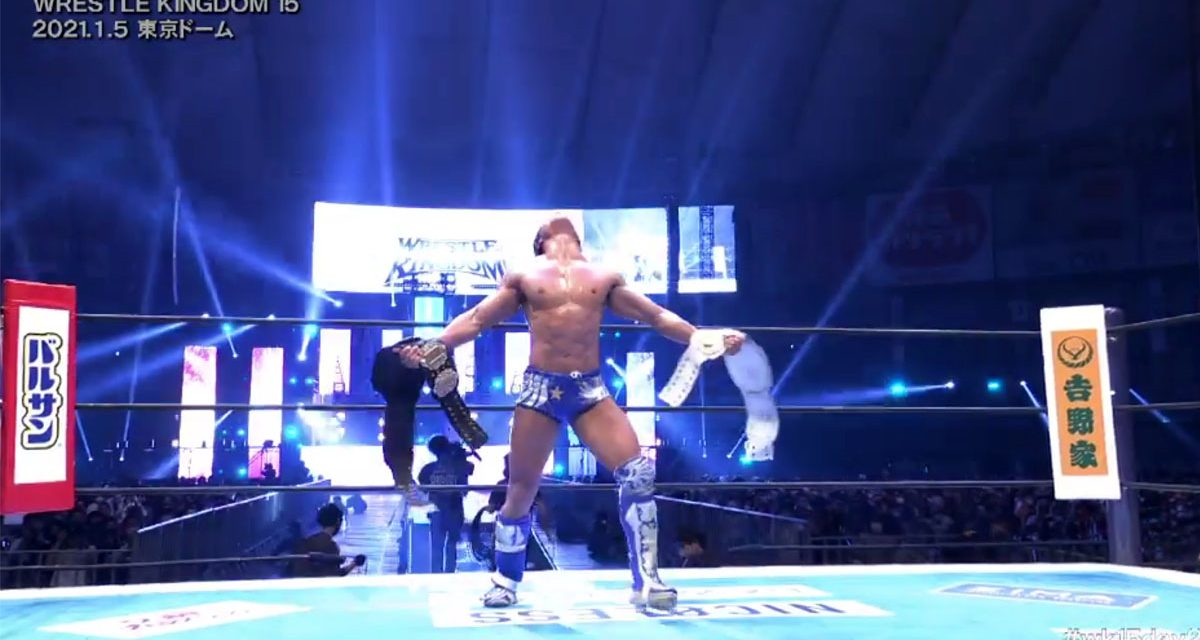 Kota Ibushi proved to Jay White and the world that he isn’t a fraud on night two of Wrestle Kingdom 15.

“We all know you are not the real champion but enjoy it and enjoy this moment. It will only last for one night because tomorrow I am taking those. I am taking everything away from you!” said White after Ibushi had defeated Tetsuya Naito on night one.

Unfortunately for Jay White the only thing he took away from his championship match at Wrestle Kingdom was more disappointment.

Popping through the entrance ramp White let everyone in attendance know what the score was before the main event began.

“Tonight is my night, baby!” he said as Gedo joined in on that long walk to the ring.

Ibushi, who went through a war with Tetsuya Naito last night, looked a little worse for wear as he made his entrance. There weren’t any smiles or tears tonight. He stared dead-ahead at his rival in the ring.

White was not happy to see that Red Shoes would be officiating the title match. He had requested that NJPW not allow him to do so.

“Not of your s–t tonight!” said White to Red Shoes as he handed over the Wrestle Kingdom contract he had won from Ibushi himself.

Before giving the championship belts to Red Shoes Ibushi had a long, hard look at them. 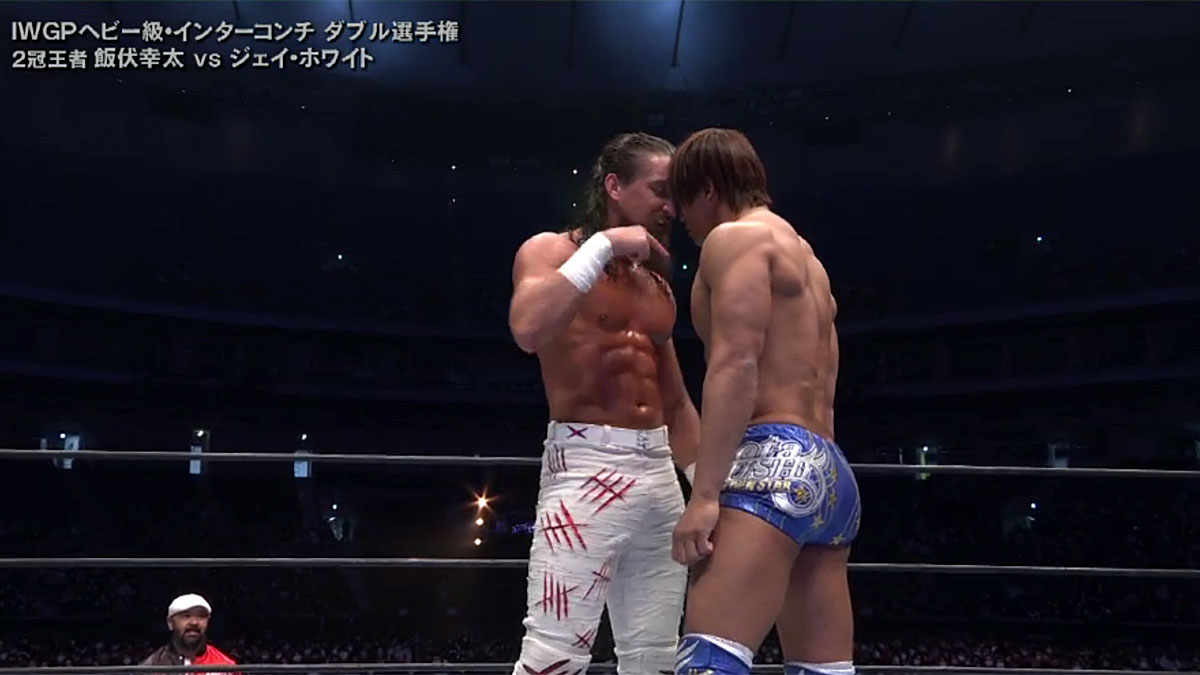 Ibushi stood in the corner shaking his head as White went through all of his pre-match shenanigans including doing a “Too Sweet” fist bump with Gedo.

Ibushi got the crowd clapping so Jay White took a powder outside the ring.

“You want me in the ring? I will stay here because I am taking the belts from you tonight!” said White standing nose-to-nose with Ibushi.

Gedo climbed on the ring apron but White waved him off.

“I have got this. Don’t worry,” he said. Gedo puts his hands in the air and backed down.

White backed Ibushi into the ropes, broke the hold and distracted the official so that Gedo could trip up Ibushi. White attacked punching and stomping him into the mat. 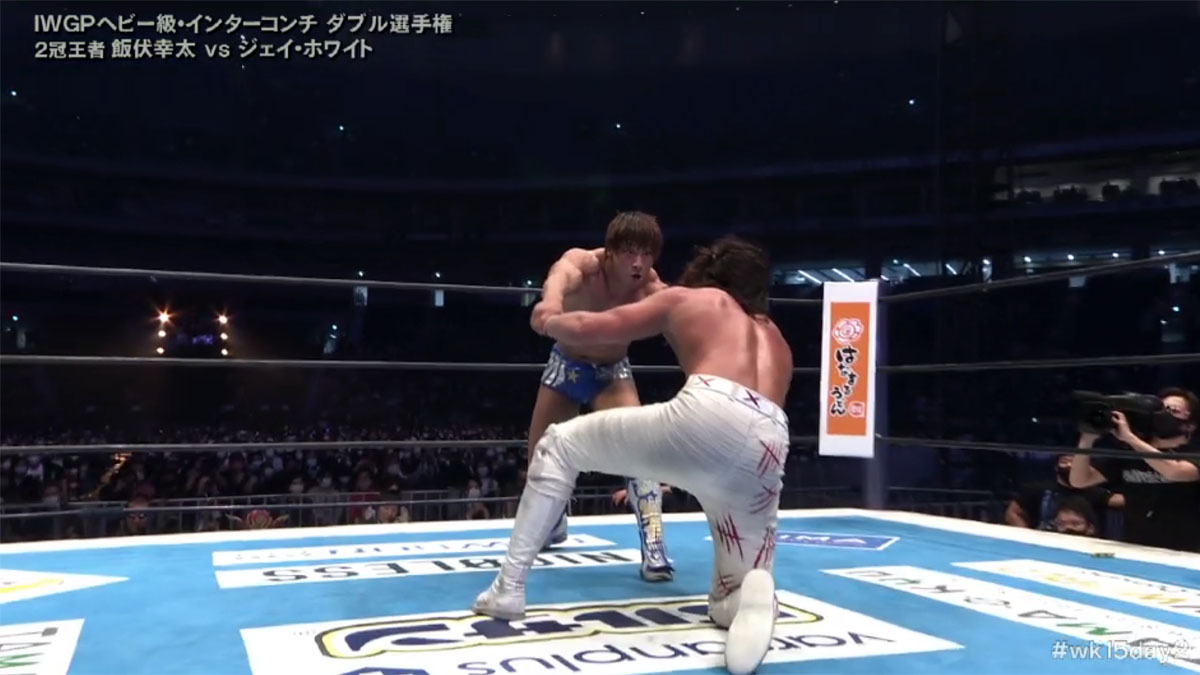 “They think they are funny and so damn cute, don’t they?” asked Rocky Romero on commentary.

A sharp drop kick to the chest sendt White scurrying out of the ring.

Gedo makes a grab for Ibushi right in front of Red Shoes. Ibushi elbows him in the mouth.

White catches Ibushi coming back into the ring with a DDT. White gives Ibushi a German Suplex on the ring apron but Ibushi lands badly on his head and neck. Red Shoes runs over to see if he is okay after that bump.

“Is he is okay, Red Shoes?” laughed White as he paced around on the ring in front of the announce desk.

“I know the rules. Don’t try and do this to me,” White complained as he continued to dominate a weary Ibushi.

Red Shoes pulled White out of the corner.

“Get the f–k off of me!” growled White grabbing Red Shoes.

Ibushi kicked White square in the face once he turned around. 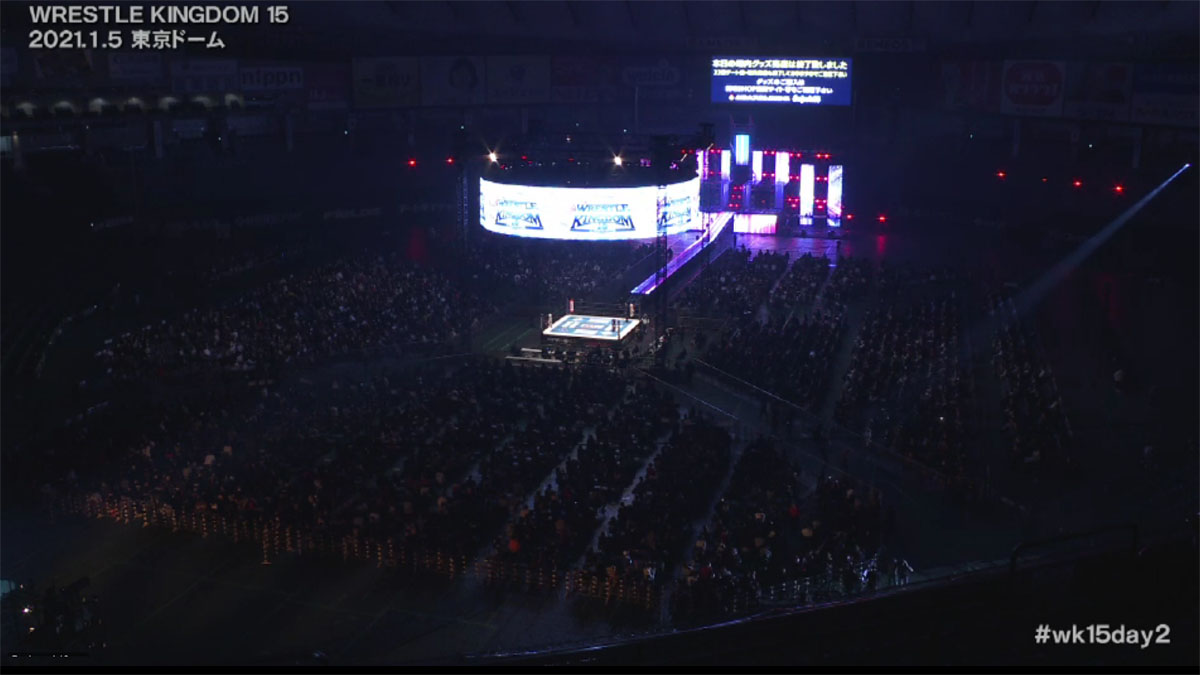 White stuns Ibushi by knocking him off the top rope. Ibushi falls and guillotines himself on the ropes on the way down to the arena floor.

“My god! He caught everything!” says Kevin Kelly.

White drops Ibushi over the top rope and asks for Red Shoes to check on Ibushi.

“Aw, f–k this,” grumbles White. He suplexes Ibushi into a corner turnbuckle. Ibushi finally breaks White’s onslaught with a well-timed German Suplex. Ibushi skewers White with a Bastard Driver before standing up and signalling to the crowd for their support.

Ibushi’s Phoenix Splash might have pinned White but we will never know because Gedo pulled Red Shoes out of the ring before he could make his count.

Gedo puts on his brass knuckles and slips into the ring. Ibushi cuts him off and knocks his head off with a Kamigoye. The crowd claps wildly.

Ibushi checks on Red Shoes bringing him back into the ring. White surprises Ibushi with a Blade Runner. Ibushi kicks out! Ibushi sets up White for another Kamigoye. White kicks him in the face as he tries to escape. Ibushi smiles and dares White to kick him some more. A running knee strike, a clothesline, a reverse Kamigoye to the back of White’s head and another Kamigoye ends the match for Jay White.

No sooner had Ibushi reclaimed his belts from Red Shoes then did Sanada come down to ringside in a suit.

“Can I have the gift of challenging you Kota Ibushi?” asked Sanada with a microphone in hand. 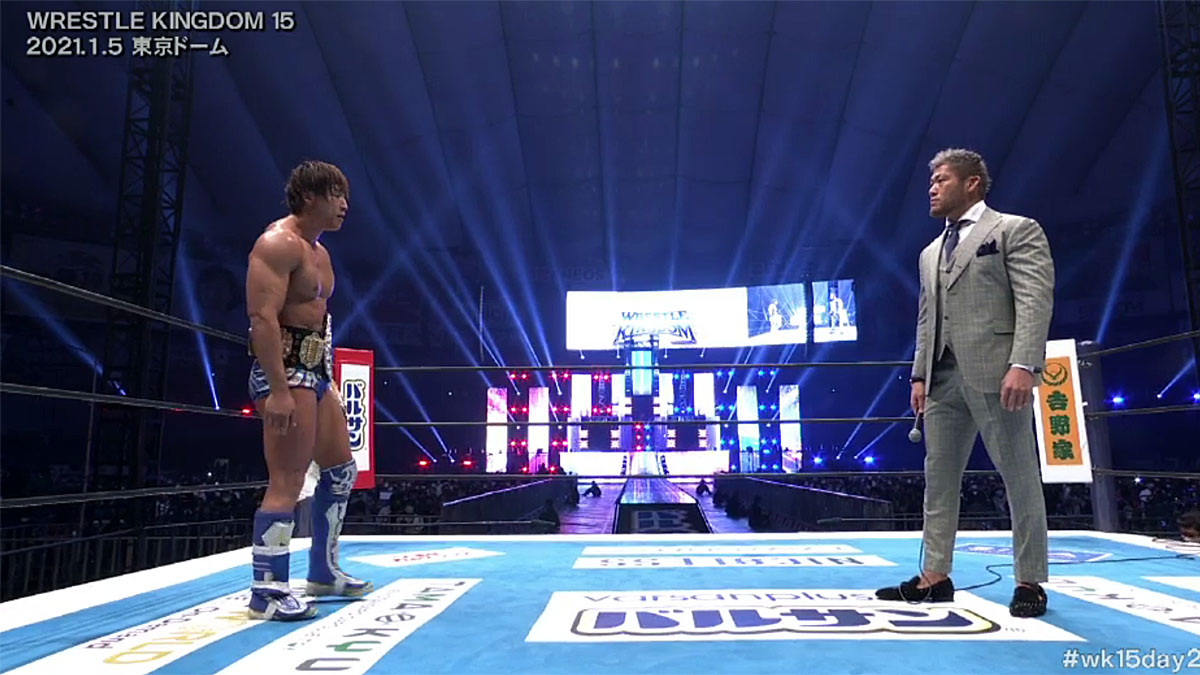 Sanada and Ibushi have a chat in the Tokyo Dome. Courtesy: NJPW.

“I am the strongest! I am the best! I hold both of these belts! I am more powerful than ever!” said Ibushi in reference to the fact that he holds both the IWGP Heavyweight and IWGP Intercontinental belt which represent the “strongest” and “best” in NJPW.

“I want to wrestle you a whole lot more in the future. In these uncertain times I am not sure when that match will be but whenever it is, I am up for it,” said Ibushi shaking Sanada’s hand. 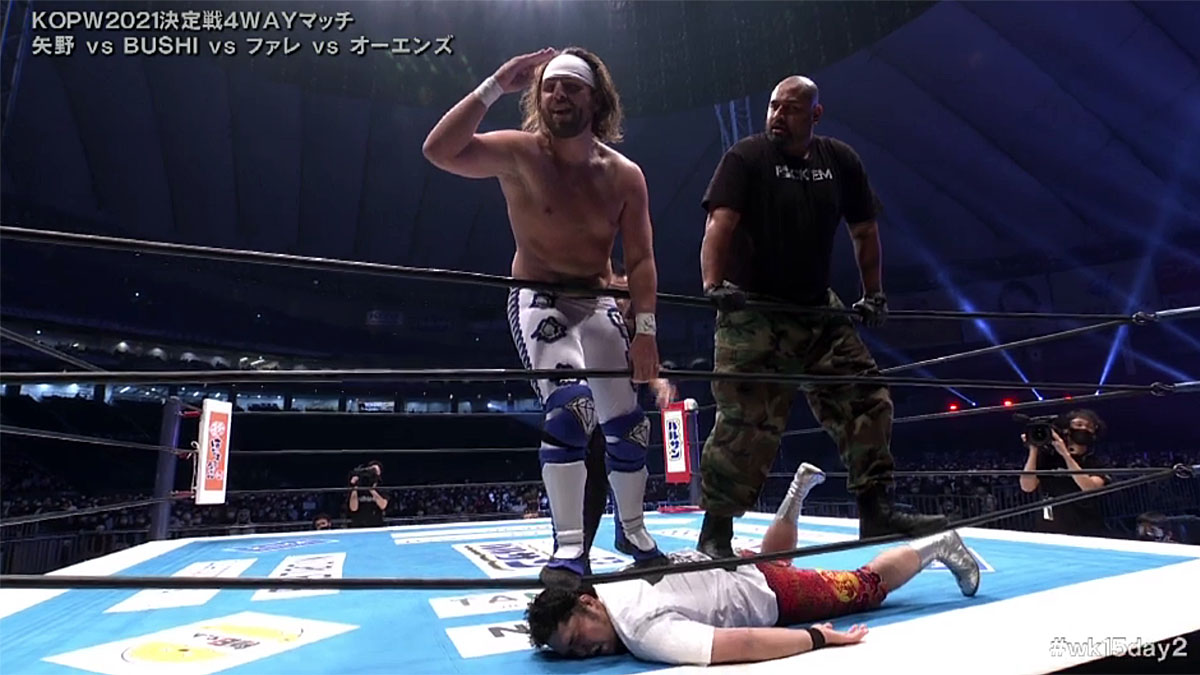 Chase and Fale are not happy that Yano didn’t even participate in the Battle Royal last night as he was the last man to enter and the match ended before he even got to the ring. They hold the ropes open for Yano. Yano refuses to enter the ring. He is scared. An amused Bushi sits back and watches. Once everyone is in the ring they all start working against Yano. Bushi even whips him into Owens who belts him with a turnbuckle pad. Owens and Fale are teaming together until they give Bushi a Grenade Launcher. They interrupt each other’s pins and the gloves are off. They argue and shove each other. The official steps between them to sort things out. They turn on him. Yano hits both Fale and Owens in the “lower abdomen” from behind and covers Bushi for the win. 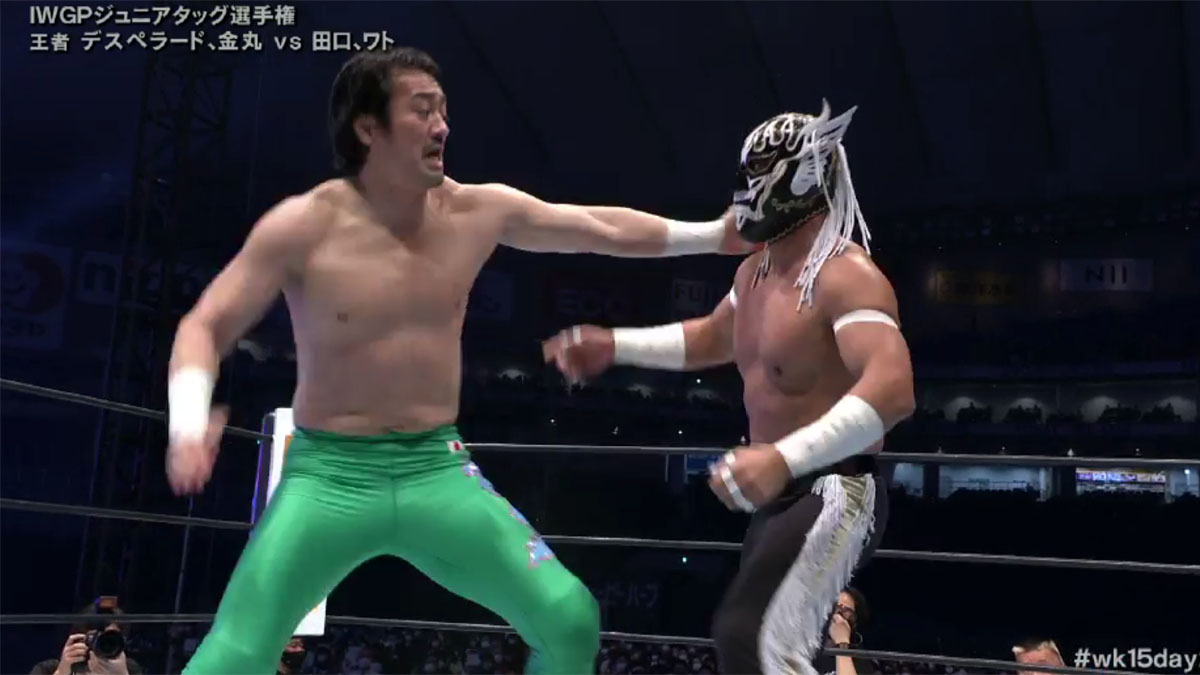 Taguchi has some fun running the ropes trying to bait El Desperado in. Desperado just looks on as Taguchi runs back and forth. Kanemaru has had enough of the foolishness. He pulls Taguchi out of the ring and wraps his knee around the ringside barrier. Meanwhile, Desperado throws Wato into his mentor Tenzan. Both fall in a heap on the arena floor. Taguchi hits the Three Amigos on Desperado. The crowd cheers. It is nice to see that after all these years people around the world still remember the late, great and inspiring Eddie Guerrero. Desperado flattens Taguchi with a closed-fist haymaker and Pinche Loco to retain the titles for his team. 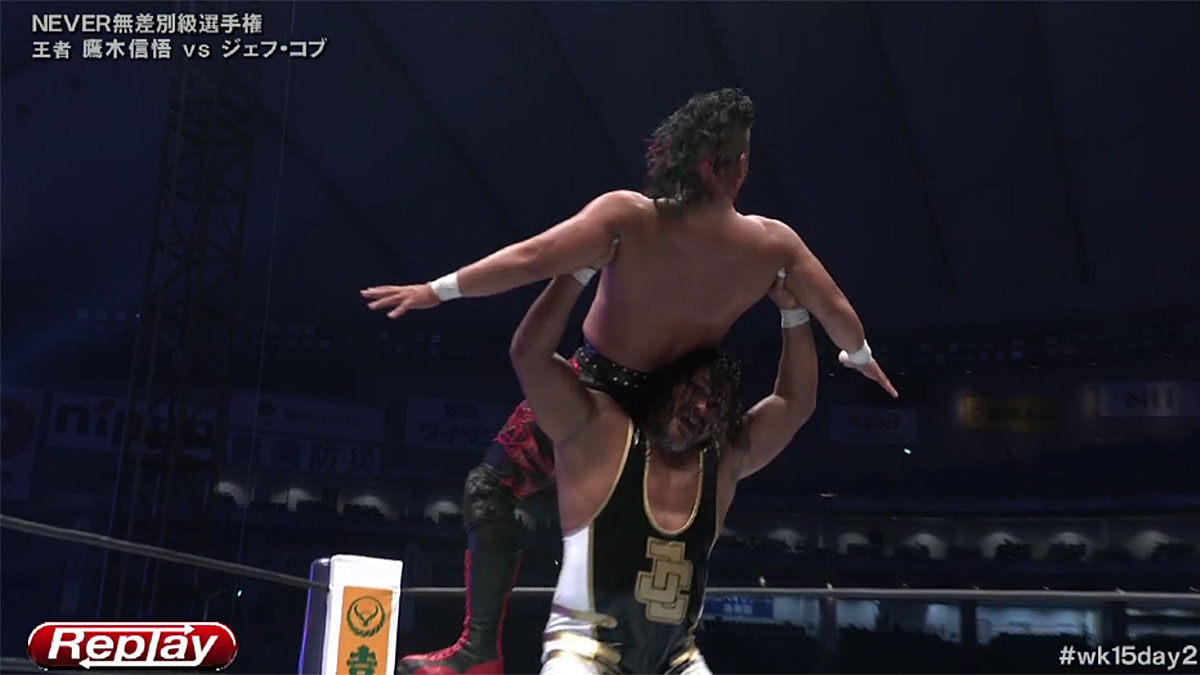 The very best match of Jeff Cobb’s young career. The two tanks take things to the floor where Shingo bounces off the ringside barrier right into Cobb’s arms. Cobb gives Shingo an impressive belly-to-belly suplex throwing him into the air. Shingo lands very hard on the arena floor. A modified Black Tiger Bomb and a Spin Cycle has Cobb tossing Shingo around like a small child in the ring. Shingo returns fire with a Superplex from the top rope. On their knees, both men take shots at one another. They battle back to their feet where Cobb suplexes Takagi. Shingo bounces off the ropes, clotheslines Cobb and just falls out of the ring. Shingo makes it back in but can barely stand up. He just collapses when Cobb tries to throw him off the ropes. Rocky Romero suggests the championship be renamed the “BMF” title. Shingo goes after Cobb’s knee. He scoops up Shingo for Tour of the Islands but his knee takes more damage when both men land on the mat. Cobb cannot cover Shingo. He is in too much pain. He limps to his feet to return to the attack on Shingo. Shingo powerbombs Cobb off the second rope and demands he get up so he can finish him off. A handful of Pumping Bomber clotheslines and a Last of the Dragon pins Cobb. Aa he staggers away from the ring Cobb tries to climb back in but Young Lions hold him back. What a wild, wild ride. These two must continue this feud. It could be so very epic. 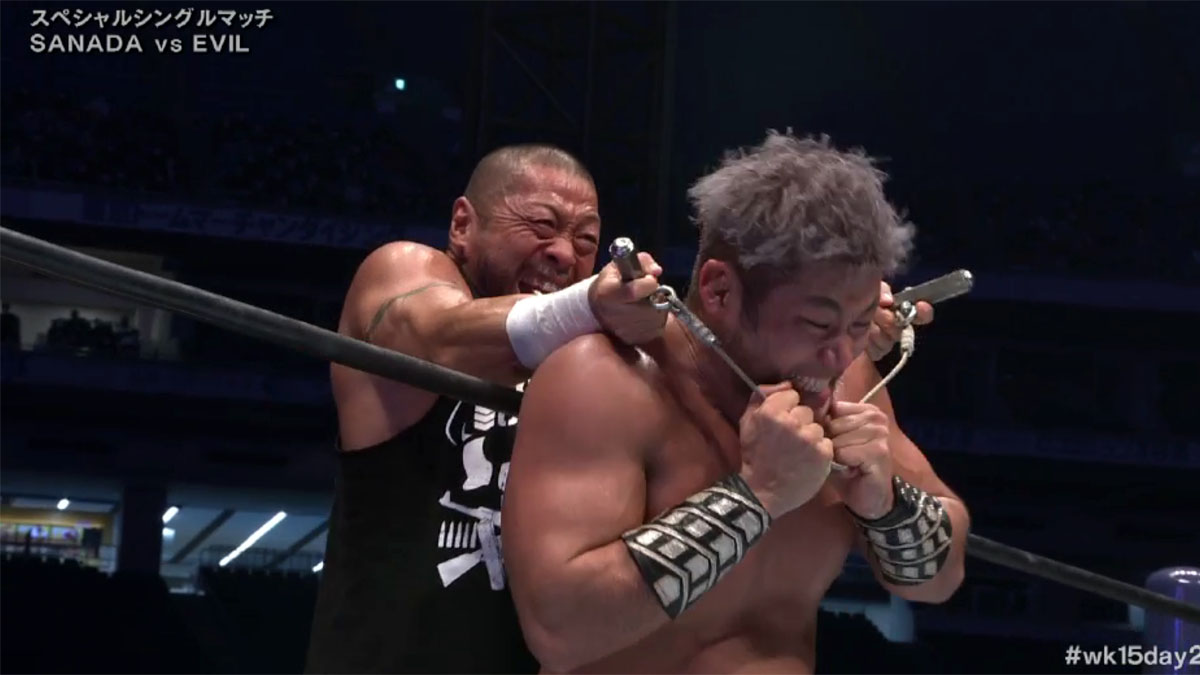 Togo sticks his nose and his garotte where they don’t belong. Courtesy: NJPW.

The former friends and tag champions go to war. Sanada makes a mockery of Evil by putting him in the Paradise Lock. On the floor, Evil slams Sanada into the steel barricade so hard it shifts backwards knocked over the time keeper and his table.

Evil devastates Sanada with his solo Conchairto following the invisible homerun into the stands of the Tokyo Dome.

Dick “Spoiler” Togo assists Evil in setting up a table outside the ring. In a hilarious moment, Evil smashes Sanada into the steel barricade knocking over the time keeper and his table yet again.

Togo climbs to the top rope so Sanada kicks Evil into the ropes which brings Togo tumbling down. Sanada locks Evil into Skull End which seems like forever. Sanada leaps off the top rope but Evil blocks the moonsault by putting his knees up.

Evil grabs onto the official so that Togo can strangle Sanada with his garotte. Sanada counters by getting his hands under the wire. Sanada drop kicks Evil into Togo. Togo takes a dive off the apron into the table below smashing it to pieces. A pop-up TKO and a moonsault from the top rope pins Evil. One wishes this match was more brutal than it was considering how much these two are supposed to hate each other. The commentators insist that Sanada wanted to beat Evil with his style of wrestling. 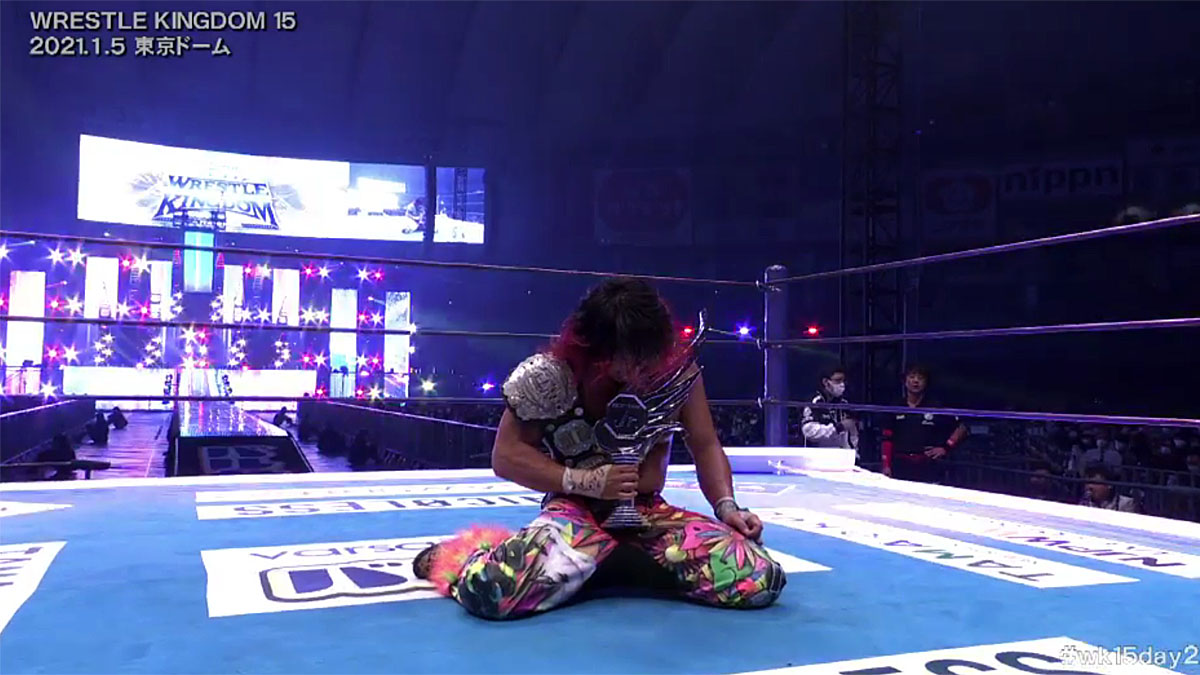 For the second Wrestle Kingdom in a row, Hiromu has won the IWGP Junior Heavyweight Championship. Courtesy: NJPW.

The match starts at breakneck speed with Hiromu attempting to a Sunset Bomb but Ishimori flips out of it. Hiromu powerbombs Ishimori on the ring apron instead. Hiromu bodyslams Ishimori on the entrance ramp and then takes a stroll up the rampway. Hiromu runs the length of the ramp only to be slammed down by Ishimori. Ishimori rips one of the turnbuckles off and rams Hiromu’s shoulder into it. The match runs ragged at a crazy pace until Hiromu pins Ishimori with Time Bomb 2.

While it may not have been as flashy as night one, night two still showcased the best that NJPW had to offer. Cobb and Takagi was a slobberknocker of a classic and the IWGP Junior Heavyweight Championship Match and the main event were incredible in every way. More Match of the Year candidates is a great way to start any new year.