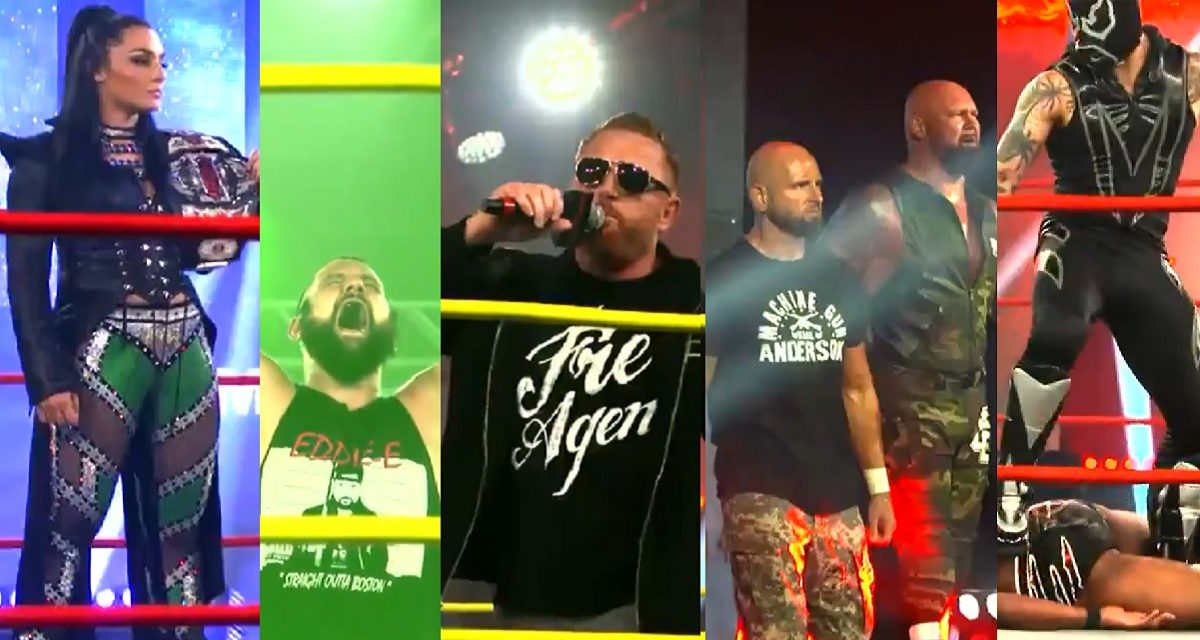 With two big shows coming up in January – the Impact+ special Genesis on January 9, and the Hard to Kill PPV on January 16 – Impact Wrestling is going to have to cram in a lot of building over the next couple of episodes. This week’s episode wasn’t about looking at what’s to come, but rather what happened over the past twelve months, in the second week of the company’s Best of 2020 retrospective.

Like with last week’s Best Of show, this review won’t go into too much detail on the matches shown, since these were simply replays or highlights of matches that took place during the year.

The show started with a tribute card for Jon “Brodie Lee” Harper, gone far too soon.

Tonight's IMPACT is dedicated to the memory of Jon "Brodie Lee" Huber.

It's Tuesday. You know what that means. pic.twitter.com/pAxXDBbSyZ

Josh Mathews and Scott D’Amore hosted the show, as they did last week.

Moment of the Year: Slammiversary

The entire PPV was announced as the Moment of the Year, and they ran down the major individual moments from that show, namely: the returns of Eric Young and the Motor City Machine Guns; the debut of Heath; and the debut of the Good Brothers.

Personally, I would have gone with the #Heath4Impact commercial that featured Cameo appearances by Chuck Norris, Nancy Kerrigan, and other celebrities (which, for me, was the second-best segment in professional wrestling this year, behind only the MJF-Jericho song and dance routine.

After detailing Willie Mack’s successful year, they showed highlights of his X-Division Championship win over Ace Austin at Rebellion. This match really highlighted how much Willie could benefit from a live crowd. His move-set and style are exciting, and in front of a crowd, this match could have been in contention for Impact Match of the Year. Unfortunately, although Willie was stellar in this match, he did decline as the year went on.

In talking about the Knockouts Tag Team Championship tournament, D’Amore mentioned Taylor Wilde. So let the discussions begin as to when she returns. Will it be at Hard to Kill? Stay tuned.

Speaking of Knockouts, Donna Purrazzo accepted the challenge by Tara Valkyrie for a Knockouts Championship match at Hard to Kill.

Josh and Scott hyped the Hard to Kill match with Omega, and called the Motor City Machine Guns possibly the best team in the company’s history. They replayed their first match back, where they dethroned The North for the Tag Team Championships at Slammiversary.

Acey Romero has taken over the John E. Bravo investigation to clear his partner Larry D. Acey questioned Crazzy Steve as to what he may have seen (or, rather, heard or smelled). Steve said that the gunshot came from the groom’s side of the ring, and suggested Romero question Johnny Swinger.

They showed highlights of the Wrestle House shenanigans, including the prank sensation that’s sweeping the nation, “Fuji-ing.” Okay, it’s likely not sweeping the nation. Or anywhere, really. And it may in fact be illegal, so don’t do it.

They showed the saga of TJP trying to defeat Rohit Raju for the X-Division Championship, with TJP ultimately Yellow-Dogging his way to the title in the Manik costume.

They ran down Ken Shamrock’s induction into the Impact Wrestling Hall of Fame, mentioning the tribute videos from Bret Hart and Mick Foley, and then showed the induction ceremony, including the gracious video received from Dwayne “the Rock” Johnson, and Shamrock’s full speech.

Match of the Year : Eric Young vs. Rich Swann vs. Ace Austin vs. Eddie Edwards vs. Trey – Elimination Match for the World Championship, Slammiversary

They showed the match, which was for the World Championship which had been vacated when Tessa Blanchard was stripped of the title and released from the company. The match saw the returns of Rich Swann from injury and Eric Young from purgatory that kicked off a vicious feud that would go on for several months to follow.

Overall, Impact did some really good stuff this year, in the face of the horribleness that was the year 2020. With big things coming up in January, including potentially more intrigue coming out of their relationship with AEW, 2021 could be one of the most important ever for the company. Hope you’ll continue to stay on the journey with our ongoing coverage.

Happy New Year, everyone. See you in a week.

Note: This report has been updated to correct an error in the name of the January 9 Impact+ special.