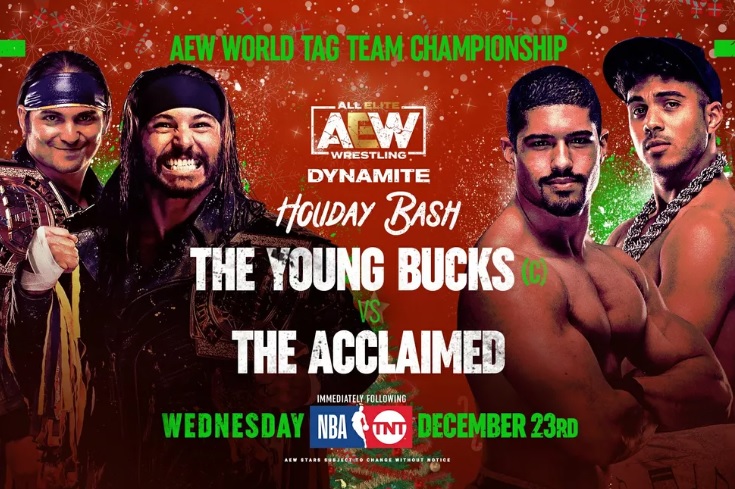 As the late, great American philosopher Tom Petty famously said, the waiting is the hardest part. In this case, we mean waiting until after the end of the Celtics-Bucks game on TNT, which ended with a crazy three-pointer by Jayson Tatum that I don’t think he called “bank” on. In any case, we’re ready to roll about two hours later than normal with a special Holiday Bash edition of AEW Dynamite. Let’s get to it.

MJF and “The Demo God” Chris Jericho vs. Top Flight

Since Top Flight is still new around these parts, the announcers go a little harder on their background while building the narrative that these up-and-comers aren’t intimidated by Jericho and MJF. Their work reinforces that theme, and while I’m not the first person to point this out, I do appreciate that the Martin brothers are more than just high spot artists. Unfortunately, they don’t have Jake Hager riding shotgun for them, and the Inner Circle big man provides the key assist to help MJF get the pin.

Whoa, Hager has something to say. He says the reason Inner Circle has been successful for the last two weeks is that every member of the group has played their part … everyone but Wardlow, that is. Hager throws some shade on Wardlow for his absence for “family business” before revealing that he has talked to Tony Khan and got himself a match with Wardlow next week.

Do we need a music video from The Acclaimed? We get one anyway. “Buck Hunt” is short and not without a few clever lines, so not so bad, all things considered.

For the third straight week, Sting comes out to discuss why he’s here discussing things. Ever the professional, Tony Schiavone tries to get right to the heart of the matter to learn why Sting is in AEW. Uh-oh, he says he can’t provide a short answer to that. I’ll summarize anyway: Sting gives credit to Dusty Rhodes for playing a pivotal role in his career, and when he saw Cody leading the charge in AEW, he just felt like he needed to be a part of it. Team Taz picks this moment to interrupt, and they certainly aren’t on hand for a trip down memory lane. As they make a move for the ring, the lights go out and Darby Allin has magically made it from the upper deck to the ring. Neat. Taz announces that Brian Cage will get his title shot against Allin in two weeks.

With a cameraman in tow, MJF pays a visit to Santana and Ortiz. He appears to be sincere in telling Santana that he understands what it’s like to lose someone close, to which Santana responds, “Keep your head up. Always keep your head up.” Both he and Ortiz shake MJF’s hand and give him a bro hug before leaving, and even the announcers seem surprised by this show of earnestness.

Colt Cabana and Dark Order’s 5 and 10 vs. Jurassic Express

You might have noticed that Jurassic Express hasn’t been pushed nearly as hard these past few months as they were during the first year of AEW Dynamite, and Jungle Boy’s solo push has also slowed down. I’m not saying they’re the B-side here, but the announcers are certainly talking about the Dark Order a lot more than them. The Dark Order trio also benefits from some assistance from their teammates, but it’s Jurassic Express who ends up with the win.

Though it sounds like we’re going to hear from the Jurassic gents, Tully Blanchard cuts them off from the big screen. He says FTR’s quest to get the tag team straps runs through Jurassic Express in two weeks

Don Callis is none too pleased that Alex Marvez is hanging around the hotel waiting to talk to Kenny Omega, but he takes advantage of the microphone Marvez is holding to express his displeasure with Tony Khan allowing the wrestlers to dictate the booking. Heh. Omega runs down all the times he says Rey Fenix choked, and needless to say, Kenny doesn’t think much of Rey’s chances to beat him next week.

The Butcher (w/ The Blade and The Bunny) vs. Pac (w/ Penta El Zero Miedo)

Eddie Kingston joins the announcers to continue one of the more amusing running bits on Dynamite as he and Schiavone trade continuous verbal barbs. He and Excalibur get into it as well, but the Mad King is cool with J.R. It occurs to me too that we rarely see Butcher in solo action. While he acquits himself well, he ends up distracted by his own boss, as it were, who in turn is occupied by the arrival of Lance Archer on the stage. A little opening is all Pac needs to wrap things up with the Black Arrow. “J.R., Merry Christmas, Schiavone up yours, I’m out,” says Kingston. Never change, Eddie.

Jade thinks it’s convenient that Brandi Rhodes got pregnant just as she arrived on the scene. She wants a worthy opponent since Mrs. Rhodes is with child, and time is ticking.

Back in the ring we go with Schiavone, who has to literally grin and bear it as Kip Sabian talks up the first wrestling wedding on TNT. It sounds like Best Friends are going to crash the wedding date announcement, but instead we see one of them being loaded into an ambulance. In case you really wanted to know when Kip and Penelope are tying the knot, it’s going to be on Feb. 3 at Beach Break.

Uno is another one who doesn’t get a lot of solo ring time, and unfortunately, he gets cut short here as they do the thing I never have understood and take a picture-in-picture break that fades into a full commercial. The highlight is probably the explanation of Dustin rejecting the 7 gimmick during his WCW days. Rhodes gets the win, and there’s a full-on Nightmare Family vs. Dark Order brawl after the bell. Lee Johnson getting some shine!

Shawn Spears isn’t lacking in confidence but definitely feels management is holding him back in AEW the same way he was held back in “New York.” Schiavone asks Spears if he ever pondered whether he was the problem. Uh, definitely not. Spears says he’ll come back if he feels like it.

Is Hikaru Shida scared of Abadon? We may never know, because Michael Nakazawa has to pull the champ away from an attack by Abadon and get her out for her ring entrance.

This could be more intriguing than the usual champion squash match, especially since Abadon makes her presence known again. Shida still wins, of course, and she heads out to the floor with her kendo stick. But Abadon is simply playing possum, and she ends up biting Shida in the neck. Geez lady. Zombie? Vampire? Make up your mind!

If you have an eight-match winning streak but all of the matches are on AEW Dark, did it really happen at all? But I kid The Acclaimed, and I do like the Bucks giving a still fairly unknown team the rub. The Acclaimed certainly puts the champs through their paces, then strike after the ref takes a bump with a low blow and a shot from their boombox. Too bad the next ref is too slow getting to the ring to count their pinfall attempt. Anthony Bowens gets powerbombed through a ringside table, and Max Caster ends up suffering the three count. Good game, good effort.

And we’re out of time for this late Wednesday night. Have a great holiday weekend, and we’ll see you in seven — at the normal time.

I don’t think AEW would ever intentionally mail in an episode, and this edition of Dynamite was fine, but it wasn’t filled to the brim with goodness and one has to think the late time slot this week had something to do with that. The next two weeks look promising, so hopefully the talent and everyone involved takes some much needed time off for Christmas and comes back firing on all cylinders.