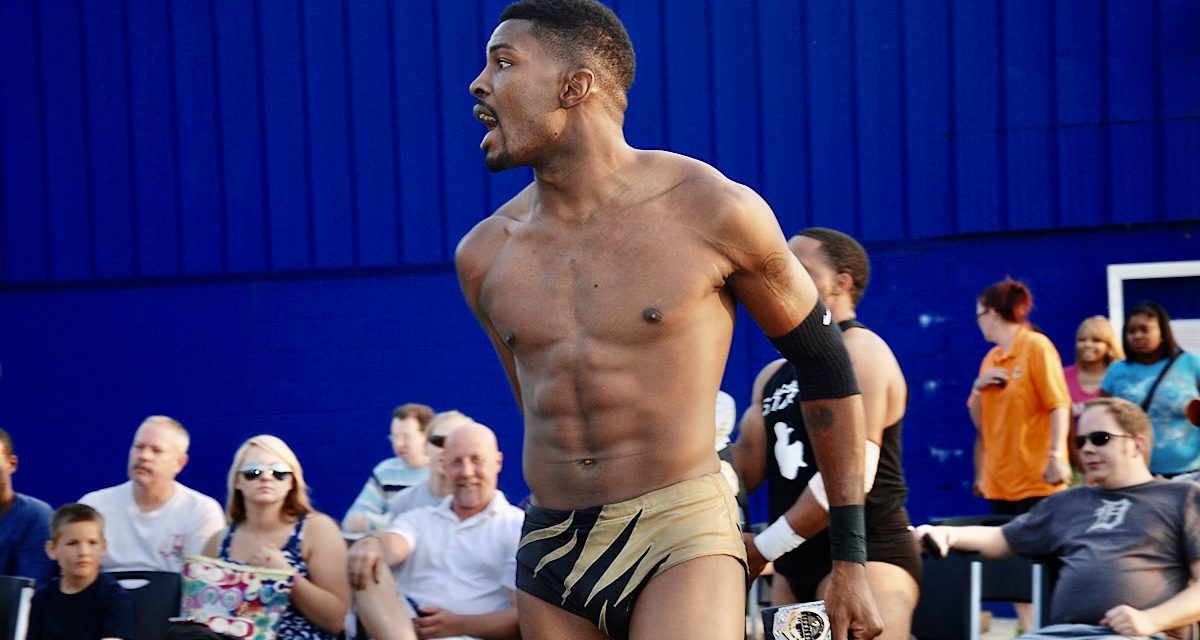 Professional wrestling holds a rich history in metropolitan Detroit, Michigan, most notably with the territorial Big Time Wrestling in the 20th century. After the promotion closed in 1980, the city’s wrestling legacy carried on through the passionate independent wrestling scene that still runs today. Numerous stars of the modern era emerged from the Detroit independents, and crops of hungry talent continue to arise with goals of triumph. Arguably the hidden gem of Detroit’s current generation is “The Kickstarter” Atlas Hytower. He’s a 31-year-old local champion that encapsulates the city’s heart, community, and determination — and most importantly, a strong love for wrestling. 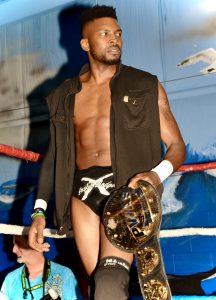 The character that primarily got Hytower into wrestling was “Stone Cold” Steve Austin at the height of the WWF’s Attitude Era: “I couldn’t wait for Monday nights to come. When you hear that glass break, and that crowd pops, you knew — you knew you were gonna be in for a ride!”

Another notable influence for him was Tony Atlas — the trailblazing black wrestler who inspired the ring name Atlas Hytower and his entry into the sport. After competing with his high school wrestling team for two years, Hytower (real name William A. Gordon lll) graduated in 2008 and immediately began the demanding journey through Motown’s independent wrestling scene as an aspiring up-and-comer.

Hytower eventually found home at Pro Wrestling All-Stars of Detroit (PWASD), a promotion continuously graced by Michigan heroes in Zach Gowen, Dan Severn, and even Sabu — the nephew of Big Time Wrestling promoter The Sheik. In fact, Hytower wrestled on the opening bout of the promotion’s very first event in 2013.

“Pro Wrestling All-Stars has kinda made me the man that I am today,” Hytower said. “Because from that point, I got to learn so much from working with guys like Breyer (Wellington), N8 (Mattson), Joe E. Legend, and Dan Severn… the list goes on… Getting to learn from guys who have years of knowing this sport is really freakin’ cool, and it’s such an honor to be under the learning tree. Especially if it’s from those guys.”

While becoming a mainstay on PWASD, Hytower developed his career-defining character, specifically his catchphrase and motto, that the now 12-year veteran reps always. “It’s just three simple words: Run This Ring… And here’s the thing with characters and me: I feel like it’s better to be something that is aligned with yourself, you know what I mean?” Hytower said. “Like me, I feel like when I’m out there, I’m taller than everybody else, I’m bigger than everybody else. I have all eyes on me, and I gotta put in this work. I gotta ‘Run This Ring.’ I gotta show everybody what I am all about, and I’m going to show these folks why they paid money to see a show.”

Standing at six-foot-three and 201 pounds, Hytower exudes confidence with every show and appearance. However, this wasn’t always the case for young Atlas Hytower: “(Wrestling) has been like a real escape for me. As a little kid, I used to get made fun of because I used to stutter like crazy. I still do now. But I was always made fun of because I could never get my words out. But now I’m kind of like at a point to where this is just who I am. And if anybody is listening out there, and if you are a young kid, if you are an adult, if you stutter or stammer your words, it’s okay. It gets better. It builds character.” 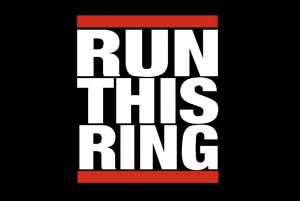 Mindset has helped the Detroit wrestler “Run This Ring” both literally and figuratively, and Hytower wears the motto on his sleeve: “I’m a guy who grew up with video games, so I always made myself in the Smackdown! games. And I would always make my own gear, and now I’m able to actually do it in real life… With me, I had to research, and see, and study how a logo or an insignia is made — or how to even start a brand,” Hytower explained.

In 2018, Hytower fulfilled a lifelong dream of teaming with his inspiration and black wrestling legend Tony Atlas. “That was a huge honor and a privilege to be his tag team partner at that show,” expressed Hytower. “Man, like think about it. For someone like me to be teaming up with the first black tag team champion — you know what I mean? It still kinda like blows my mind, because I’m a history buff. And this is another reason why I do it too: I feel like there aren’t enough guys who look like me who are doing this — especially as a kid. And now, I’m able to grow up, and I’m one of those guys now. And it’s thanks to guys like Tony Atlas that might be the reason why I’m here now doing this interview.” 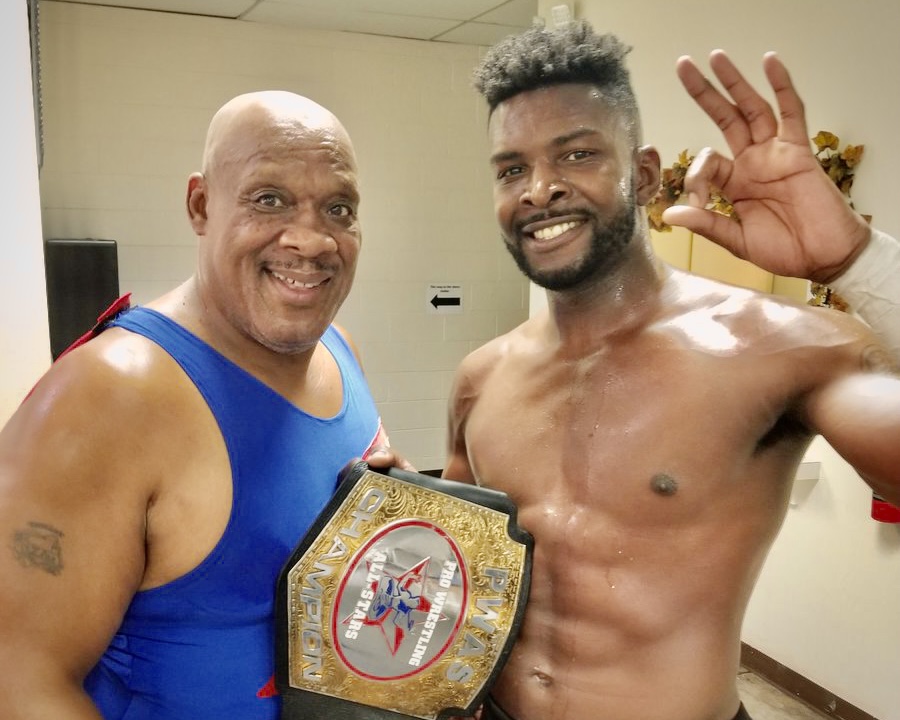 Someone who has followed Hytower’s entire career is “Amazing” N8 Mattson, a Detroit indy standout who has wrestled for promotions like Dragon Gate USA and EVOLVE. “Atlas Hytower is one of those guys that has a ton of potential and (is) looking to burst out any day now. (He) just needs to get his name out there and make more towns,” said Mattson. “I’ve known Hytower for a while now, and he even attended the wrestling school that Breyer Wellington and I ran for over a year. Atlas came to every practice session, did all the drills, and earned his stripes the old fashioned way — by paying his dues and working for it.”

Events have been running throughout the 2020 pandemic, however not without its limitations and setbacks: “It’s definitely challenging, I will say that. It’s quite different. I mean… (there are) less fans due to social distancing. The difference is there just seems to be less energy in the air, especially during the match,” explained Hytower. “But yeah, ever since this COVID thing, it’s been in a weird funk… It’s still fun, we always have a blast, it’s just right now in a weird little funk.”

Still promoting shows at the current forefront of Detroit independent wrestling is Horror Slam — the rising promotion that specializes in violence and bloodbaths, much like the Big Time Wrestling scene from years prior. Along with local staples like Hytower, the promotion regularly books top modern deathmatch wrestlers like Nick Gage, Shlak, John Wayne Murdoch and others.

“The Detroit indy scene is getting kinda hot… (Horror Slam) has talents coming from all over, especially from the deathmatch scene… (and) we’re getting new talents coming almost every show,” Hytower said. “Every time there is a show in the Detroit area, people come out, and they don’t know what to expect, especially in the midst of a lockdown pandemic where people need an escape from the monotony. Because being cooped up in your house all day, being on the Zoom, working from home — folks wanna come out, and they want to let loose. So why not go on out to a show?” 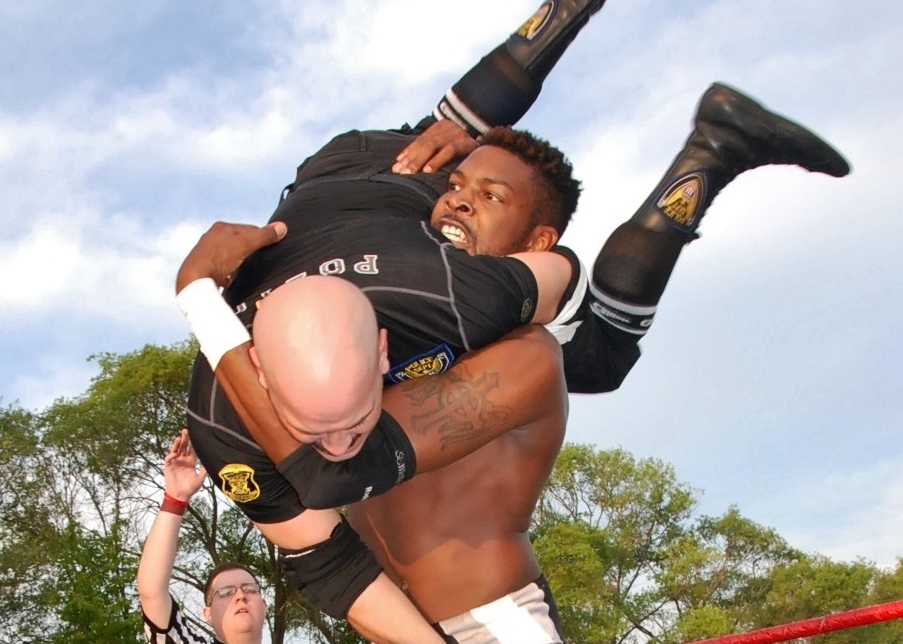 “The Kickstarter” Atlas Hytower with the slam.

The impassioned Detroit community has kept the city’s wrestling scene alive decades after Big Time Wrestling’s rise and fall. And although the general attendance is far below the territory promotion’s finest number, the Detroit independents are still full of drive and enthusiasm for wrestling, and that’s what Atlas Hytower is all about.