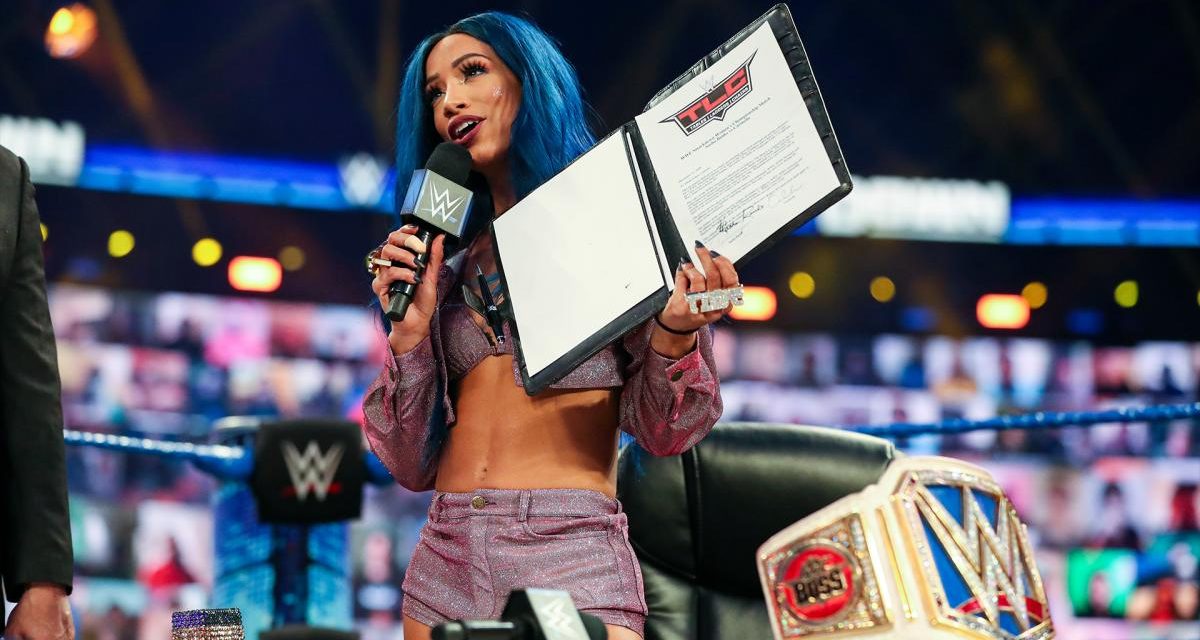 Featuring another non-title match that hopefully won’t end in the non-champ winning, since that makes no sense, this November 11th episode of SmackDown also has a match scheduled for TLC, that for some reason, is happening now.

We start off the show with a contact signing for Sasha Banks VS Carmella at TLC. Sasha comes out to sign the contract, but Carmella has brought it backstage with her. She signs it and gets her lackey to bring the contract down, and Sasha signs it. Sasha gets a little antsy though, and proposes that she wrestles Carmella tonight instead. Carmella accepts, and Sasha delivers a backstabber to her lackey for good measure.

Ford delivers a couple kicks, a back suplex, and a standing moonsault. Ziggler looks for the Famouser but gets caught with a powerbomb attempt. He reverses it into a pin for 2 and goes for the Zig-Zag, but Ford hangs on to the ropes and delivers an enziguri. Ford climbs to the top rope and looks for his Frog Splash, but Roode takes out Dawkins on the outside, distracting Ford long enough for Ziggler to shove him off the top rope. Ziggler delivers a devastating superkick to put Ford down for the win. 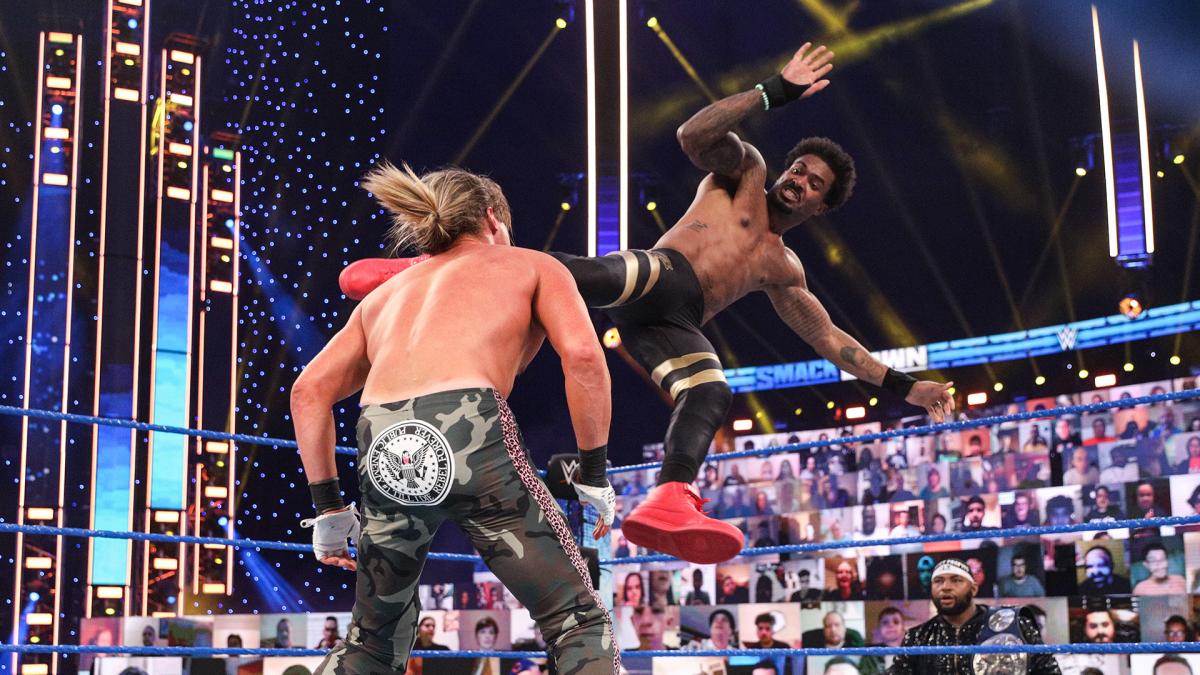 Montez Ford with an enziguri to Dolph Ziggler. Photo: WWE

Backstage, Sami is upset that everyone else has new merchandise and he he doesn’t even have a new t-shirt. Big E tells him not to worry about the shirt, worry about the meat inside the shirt, which is oddly inspiring. Apollo has a t-shirt for Sami, and it’s obvious the shirt was made using Microsoft Paint. Sami tries to rip it apart, but his hand is “injured” from Big E’s hearty handshake. He promises Big E that he’ll take him down, and Big E promises the same.

Sami starts off using his regular weaseley tactics, running away to the ropes and such, but Big E catches up to him, locking him in an abdominal stretch. Sami delivers a few punches to get out but gets caught with a vicious back elbow. Big E brings him out to the apron and delivers his Big Splash as we go commercial.

When we come back, Sami is taking it to Big E, beating him down in the corner. He delivers a knee right to the jaw for 1, and delivers an elbow from the second rope. Sami looks to mock Big E by delivering his Big Splash, but Big E gets back up and tosses Sami with a series of belly to belly suplexes. He delivers the Big Splash and looks for the Big Ending, but Sami rolls out of the ring. Big E fakes him out and is able to deliver a clothesline, but when he goes for an avalanche, Sami catches him with a boot. 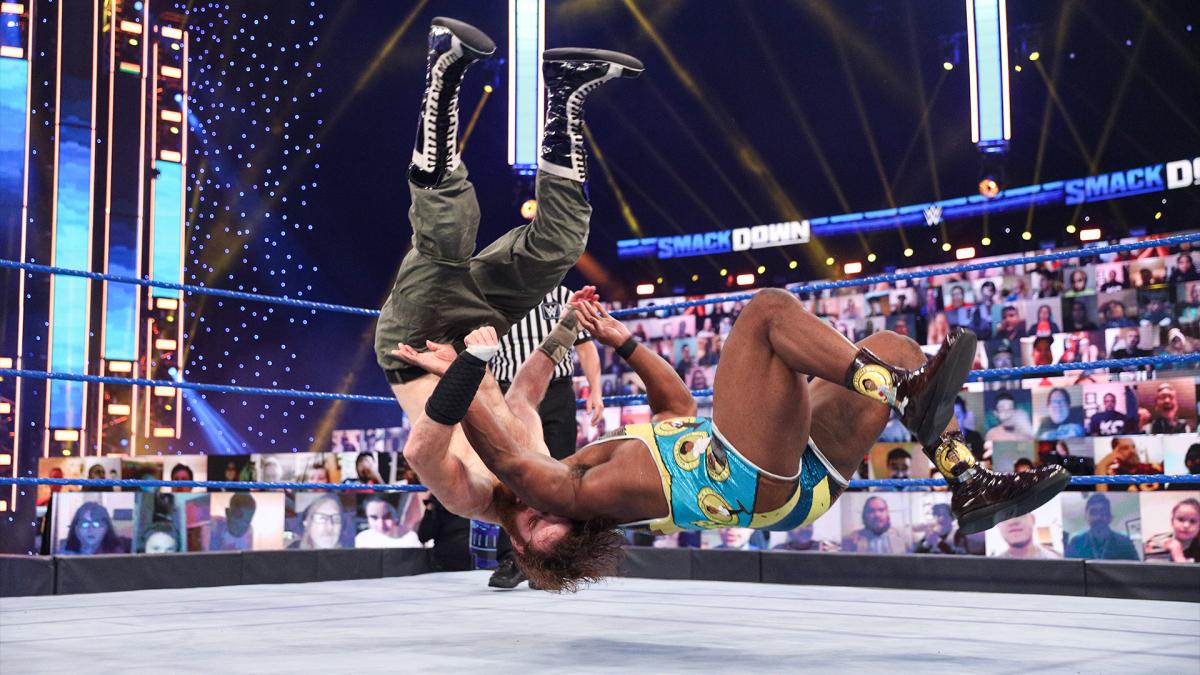 The champ goes for a crossbody but gets caught by Big E for a Big Ending attempt. He gets out of it and looks for a Helluva Kick, but Big E slams him with a uranage. Sami pretends to have an injured hand and then slaps Big E, which only makes the big guy angrier. Sami runs to the outside and is chased by Big E, but Sami goes under the ring, followed closely by Big E. Sami comes out on the other side with Big E holding on to his leg. He kicks Big E in the head a couple times and is able to get back into the ring, but Big E can’t beat the ref’s count and loses by count-out.

Backstage, Kayla Braxton interviews Carmella, who says that she’s going to beat the disrespect out of Sasha Banks. She gets her lackey to prepare some champagne by ringside, so she can “celebrate in style.”

Kevin Owens comes into the ring and pulls out a table, a ladder, and a chair. Backstage, Roman Reigns tells Jey Uso to go deal with him. K.O grabs a mic and tells Roman once again that he doesn’t fear him. He says he’s got a few friends that will help him win, table, ladder, and chair. He describes all of them like he’s on a kids’ show, which I found very amusing. He promises to become the Universal Champion once again, but Jey Uso comes out and attacks him with a chair. He sets him up on the table and goes to the top rope, but K.O catches him with a chair and then delivers a Pop-Up Powerbomb through the table. 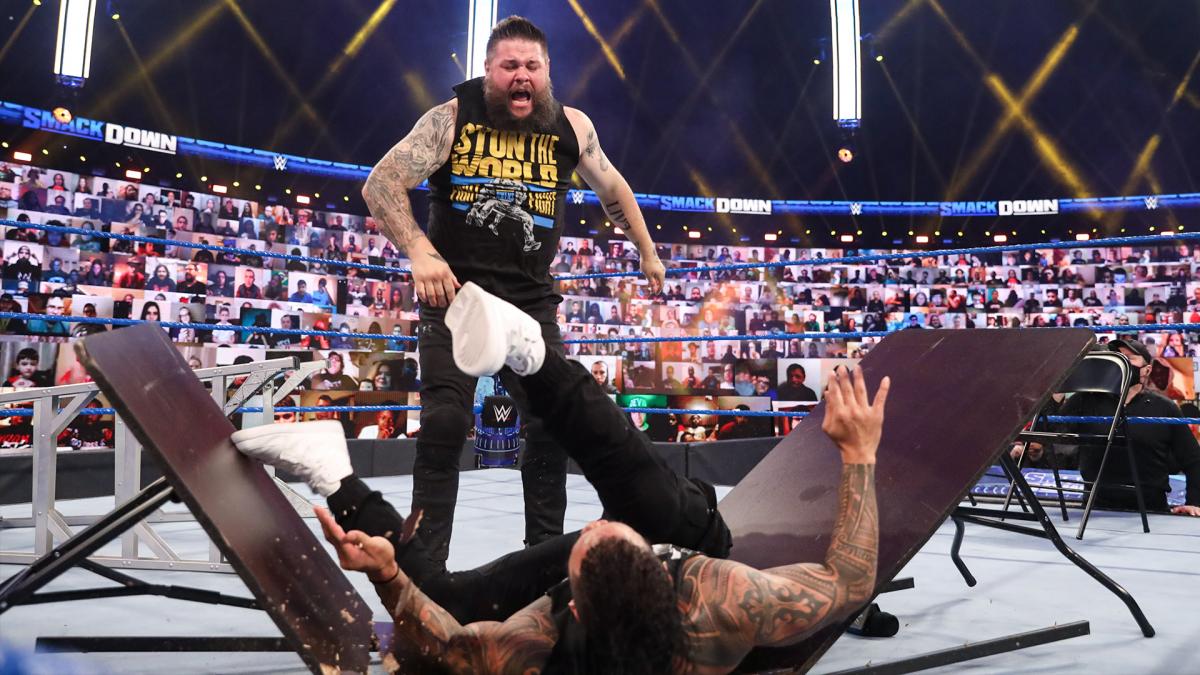 Roman Reigns comes out as well, and Owens dares him to come to the ring, but he simply stares him down from the entrance ramp and then goes backstage again. K.O goes after him with a chair.

He asks Kayla Braxton if she’s seen Roman, but he gets his answer as he is attacked from behind by the Universal Champ. Roman taunts Owens’ family and then delivers one final kick to his challenger at TLC.

Ruby Riott starts off against Billie Kay, but she quickly tags in Liv for an assisted dropkick. She tags in Riott again for an assisted spear for 2. Liv is tagged in and gets caught with Shades of Kay right off the bat, and tags in Natalya, who beats down Liv. She tags in Kay, and they beat Liv down in the corner.

Natalya tags herself in and locks in a submission on Liv. She fights out of it but gets caught by Natalya, who spears her into the corner. She delivers an atomic drop, but Kay tags herself in. Liv shoves Kay away, and she accidentally hits Natalya, allowing Liv to get to her corner and tag in Riott. The two execute their Jersey Codebreaker/Riott Kick combo on Kay for the win. 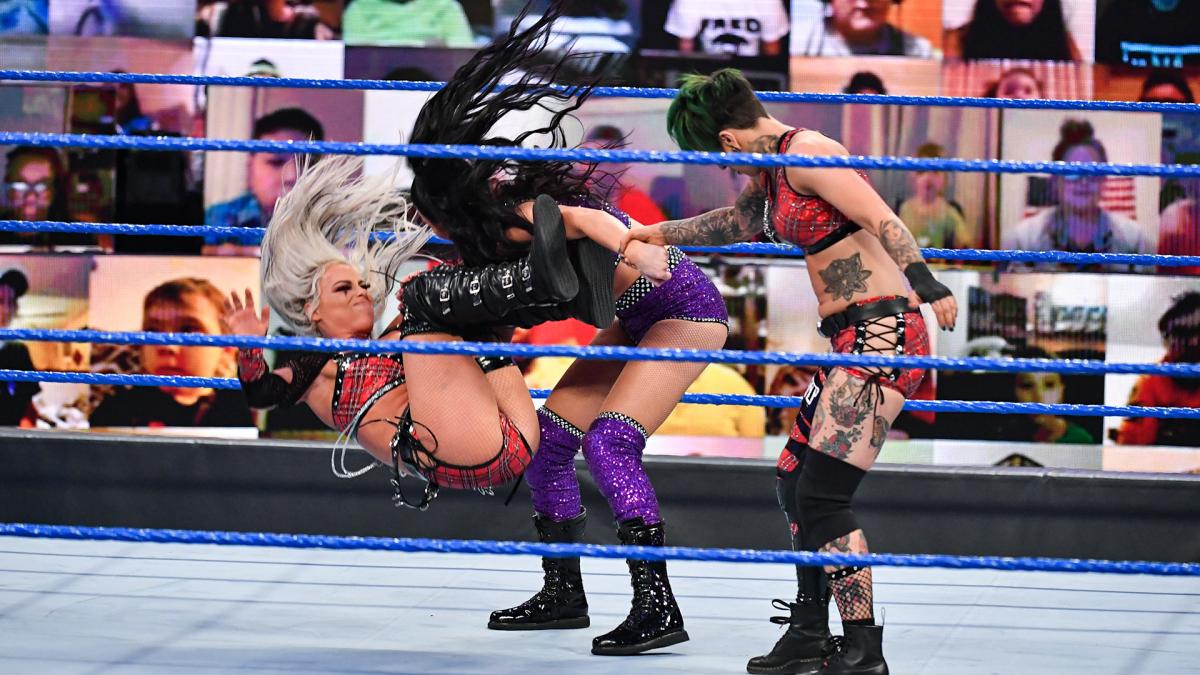 Winners via pinfall: The Riott Squad

Otis and Chad Gable VS Shinsuke Nakamura and Cesaro

Chad Gable starts off against Cesaro, and the Swiss Cyborg immediately uses his power advantage to shove Chad away. He tags in Otis, who shoves Cesaro to the ground. Otis tags Chad back in, and he takes Cesaro down and uses his mat wrestling skill to roll Cesaro up for 2. He tags Otis back in, and the big man tosses Cesaro around once more.

Chad tells Otis that he can take Cesaro, so Otis tags him in, but he immediately gets caught with an uppercut that echoes throughout Tropicana Field. Cesaro tags in Nakamura, who uses his educated feet to punish Chad. The former Olympian delivers his own kick and tags in Otis, and Nakamura tags in Cesaro.

Otis runs through the Swiss Cyborg, but when he goes for the Caterpillar, Chad tells him to tag him in. He goes for a crossbody, but gets caught with a Giant Swing that lasts a stupid amount of time. Cesaro tags in Nakamura, who delivers the Kinshasa for the win.

Backstage, King Corbin introduces Westley Blake and Steve Cutler as the Knights of the Lone Wolf. They promise to bring a little old school attitude to the WWE.

She delivers some back elbows and looks for an attack in the corner, but gets tossed over the rope onto the apron. She gets caught with a kick and then a double-knees against the ringpost, but escapes Banks’ piledriver attempt and delivers an X-Factor on the apron as we go to commercial. 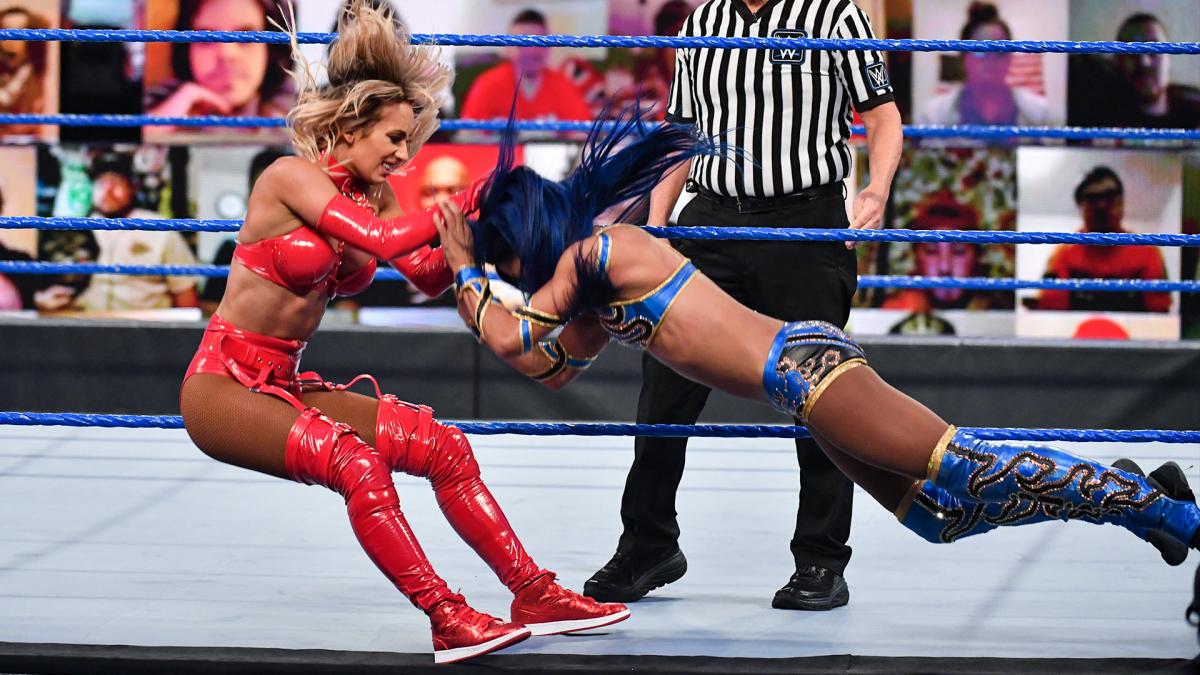 Carmella with a devastating X-Factor to Sasha Banks on the apron. Photo: WWE

When we come back, Carmella is fighting out of a superplex attempt, and then slamming the champ’s shoulder into the ringpost. She brings Banks back into the ring and pins her for 2, and then smack talks and beats down the champ for another 2 count. She locks in a submission, and Banks backs her into the corner and then delivers the double knees in the corner for 2. She looks for the Bank Statement, but Carmella fights out and then locks in a headscissors while tied up on the ropes.

She takes her anger out on the lackey as well, locking him in the Bank Statement, until Carmella collects herself and beats her down with superkicks, even smashing a champagne bottle over her back. The show ends with Carmella standing tall, seeming very proud of her disqualification victory.

An all around good show. It had fun matches, and I was super glad to see Billie Kay getting some screen time besides presenting her resume and getting rejected. Still think they could’ve built up Sasha Banks VS Carmella at TLC without having literally the same match beforehand, but I do not pretend to understand the inner workings of WWE Creative.