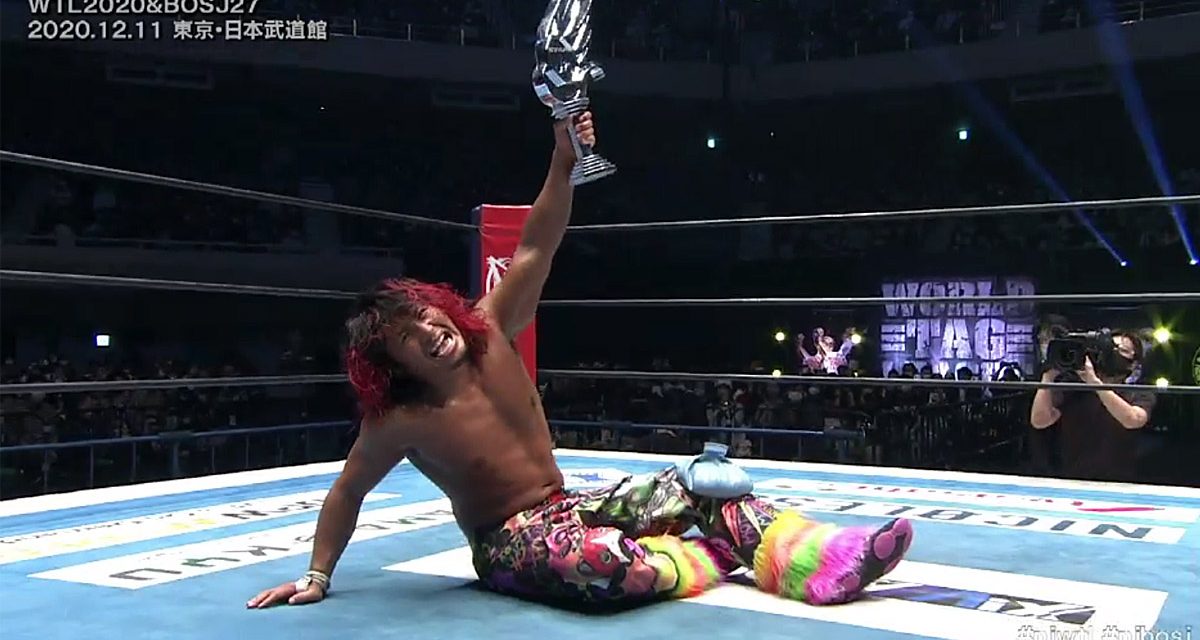 For the second time in his career Hiromu Takahashi is the winner of the Best of the Super Juniors tournament. Takahashi also won the title in 2018 by beating Taiji Ishimori. 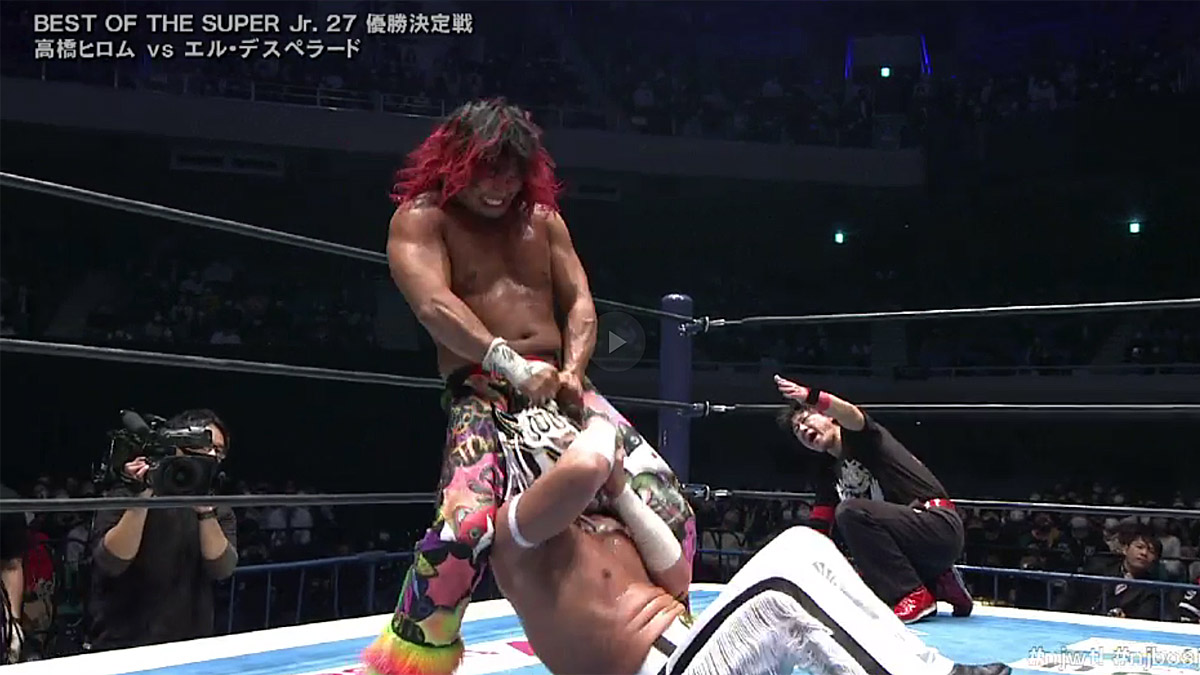 Takahashi defeated an unmasked El Desperado in the finals held in the Nippon Budokan. Frustrated with how Desperado was targeting his knee, which included him bashing it over and over with a steel chair, Takahashi tore at El Desperado’s mask ripping it in half. Furious, Desperado stood up tearing the rest off himself stunning the crowd in attendance. 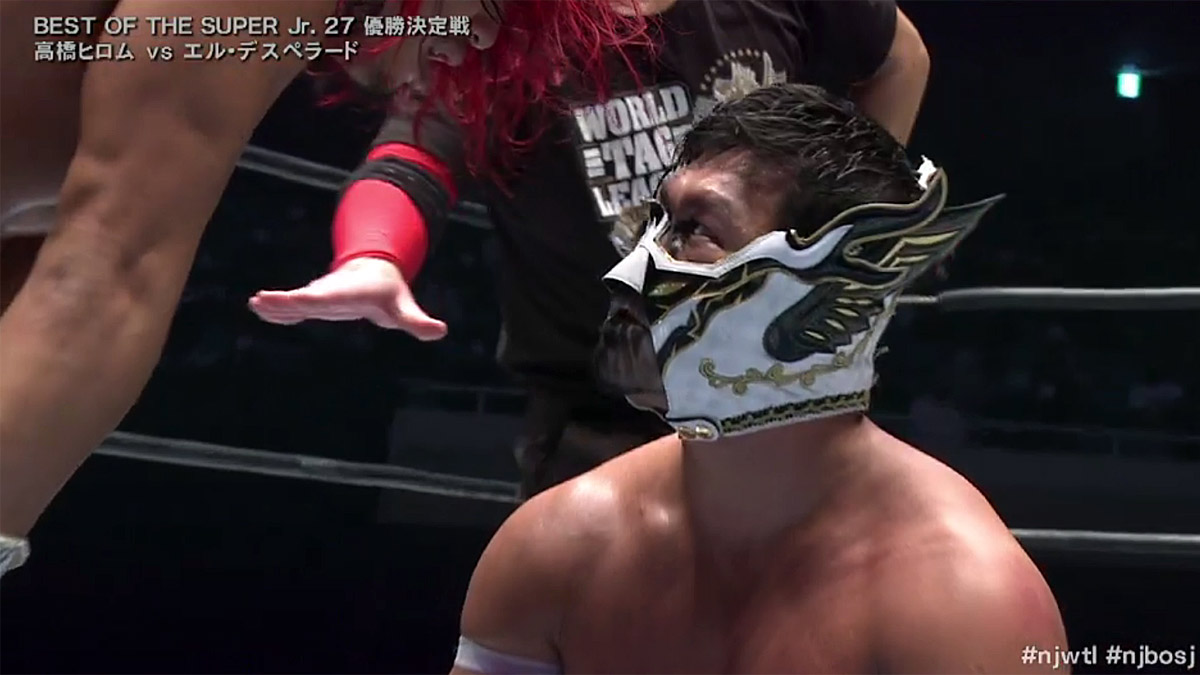 Both men wildly punched and chopped at each other then tore at each other’s faces. A strike by Takahashi dropped Desperado to his knees almost knocking him out. Takahashi blocked a Pinche Loco with a nasty head butt. The pair knocked each other silly with dual clotheslines. Takahashi followed up a thrust kick with a running Death Valley driver onto the exposed turnbuckles leaving deep bloody welts on Desperado’s back. 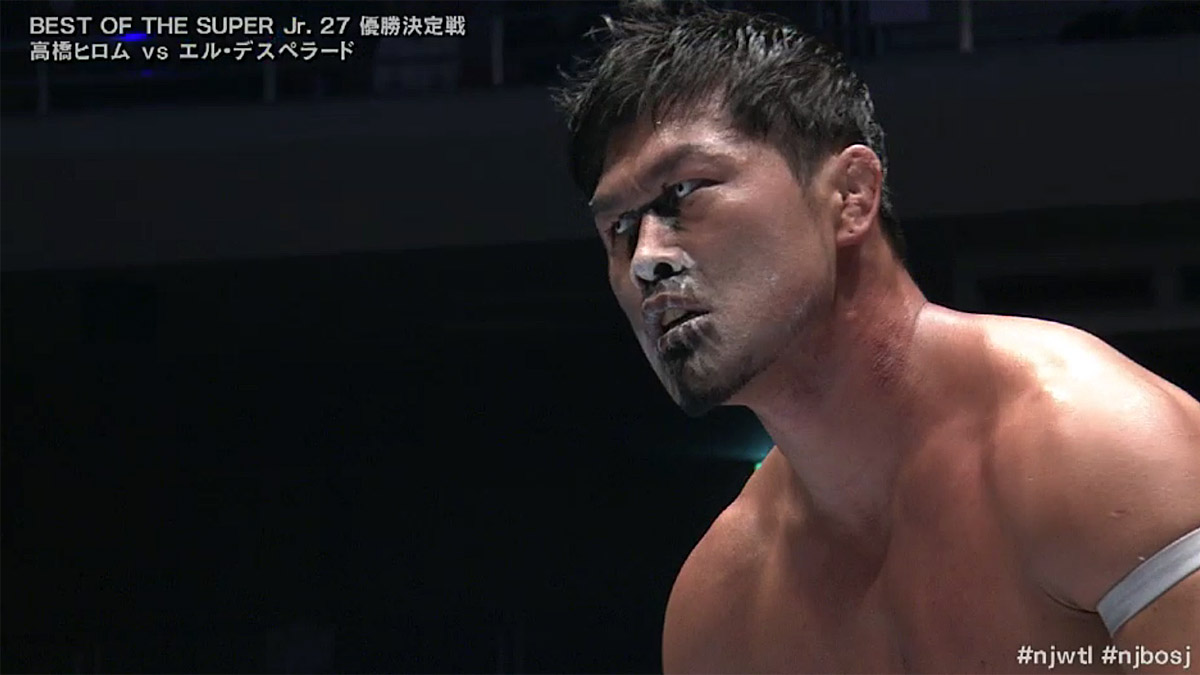 While Desperado was assisted to the back Takahashi warned him that their feud isn’t over just yet.

“Until we retire we will be fighting forever! I won this time but I will see you again,” said Takahashi.

Takahashi addressed his upcoming foe the IWGP Junior Heavyweight Champion, Taiji Ishimori, but had an announcement to make.

“Before I face Ishimori there is something that I have to do otherwise it will just eat at me,” said Takahashi declaring he wants to face the winner of the upcoming Super J Cup Tournament. That tournament takes place this Sunday night. 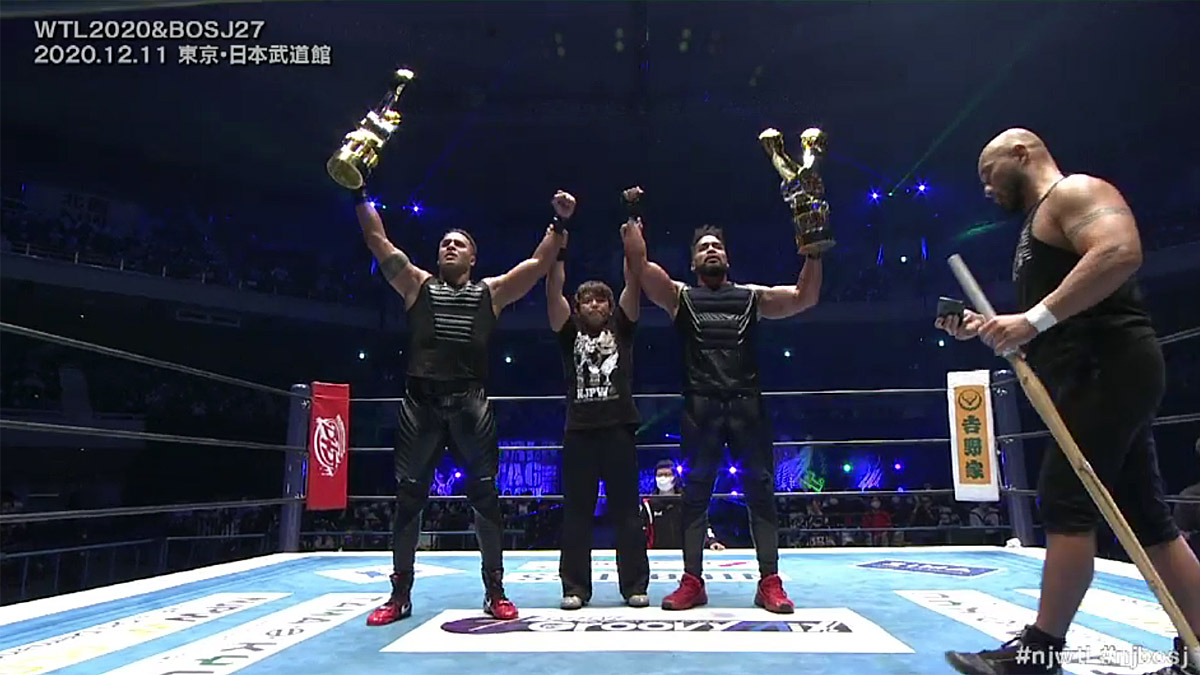 In the World Tag League tournament it was the Guerrillas of Destiny who capped off their return to NJPW by claiming this year’s title and they did it without Jado. Jado was booted from ringside when he was caught tripping Juice Robinson. The crowd cheered happily.

Bullet Club resorted to Plan B. Kenta scrambled to the ring during the match clocking Juice Robinson in the head with his U.S. championship contract briefcase busting him open. The Guerrillas pinned Robinson with their Super Powerbomb to win World Tag League 2020. The Guerrillas will face the IWGP Tag Team Champions at Wrestle Kingdom. The current champs are the Dangerous Tekkers (Taichi and Zack Sabre Jr.).

The rest of the 2020 schedule leading up to Wrestle Kingdom on January 4th and 5th is:

Bullet Club attacks after Yano’s lengthy introduction. Yano hits Fale with a turnbuckle pad. Fale doesn’t move an inch. Eagles and Owens have a great back and forth. It would be awesome to see them in a singles feud perhaps over the Package Piledriver and Turbo Backpack moves? In a quick ending, Owens and Fale pin Eagles with the Grenade Launcher. Yano continues to try and bodyslam Fale but fails miserably and gets slammed for his efforts. Fale stomps on Yano’s KOPW 2020 trophy breaking it into many pieces. 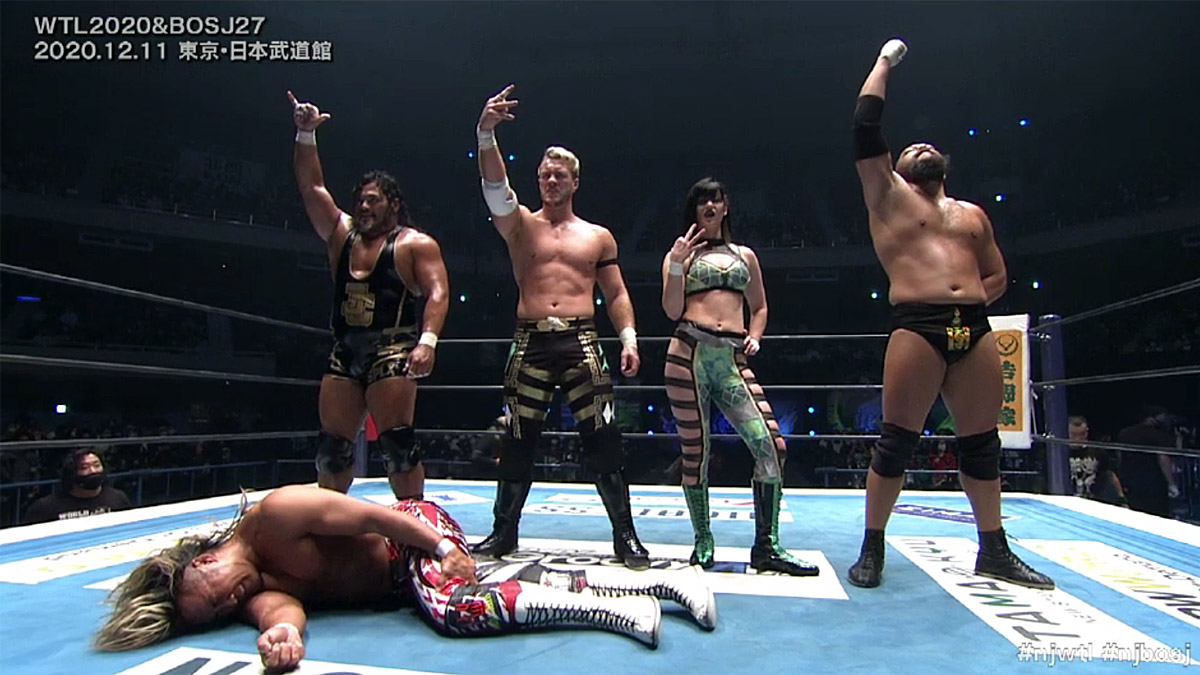 Empire has a new theme song as Cobb is officially announced as a member. Bea Priestley is in the house tonight. Henare is pinned by a Tour of the Islands from Cobb. Empire works over Tanahashi’s already injured knee after the match. Okada and Ospreay jaw-jack in the middle of the ring. Okada grabs Ospreay by the throat. Cobb nails Okada from behind. While Cobb holds Okada, Ospreay hits an OsCutter on Okada laying him out. Khan wails on Tanahashi’s knee with a chair while Ospreay and Cobb hold him down.

Shingo Takagi and Sanada versus Yujiro Takahashi and Evil 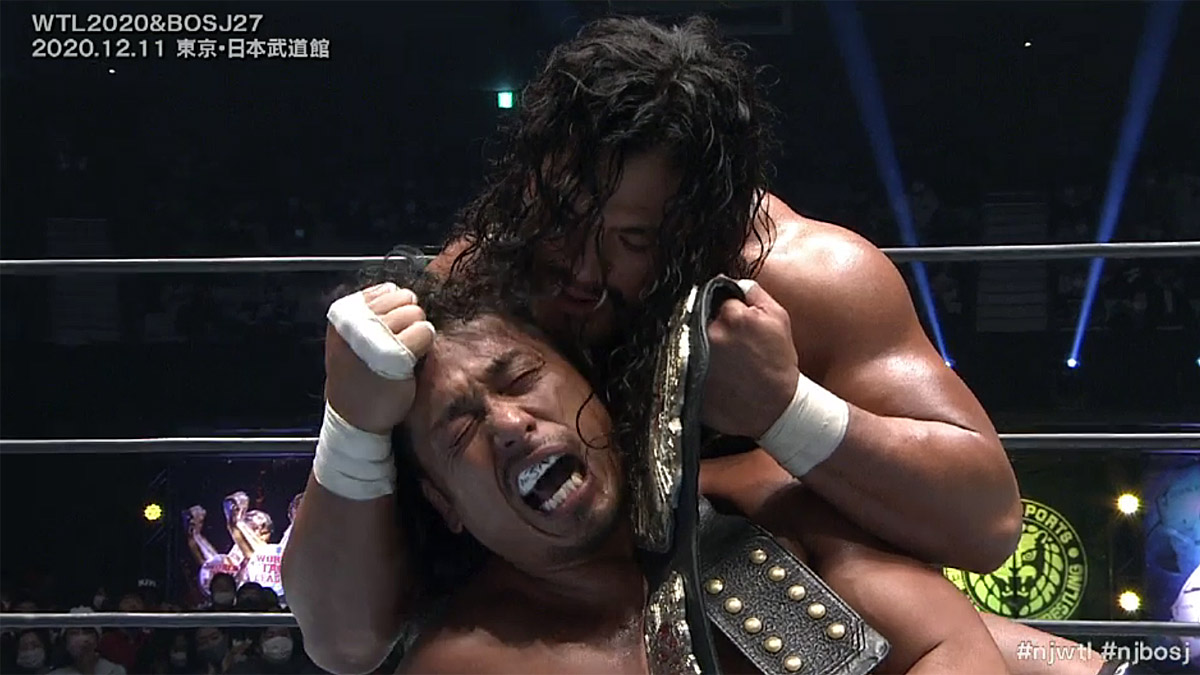 Yujiro distracts the official while Togo chokes out Sanada with his garotte. The training staff is out for Sanada so Shingo has to wrestle the tag team match alone. Sanada arrives back in time to save Takagi from being beaten with Yujiro’s walking stick. Sanada goes mental on all three members of Bullet Club. Shortly thereafter Shingo pins Yujiro with the Last of the Dragon. Sanada continues to beat down Evil. Young Lions have to pull Sanada off of him. Evil and Sanada batter each other all the way up the entrance way and into the back. Jeff Cobb steps into the ring to challenge Shingo. He wants a shot at the Never Openweight Championship. Cobb grabs the belt. The tug of war over the belt ends with Shingo being dropped with a Tour of the Islands. Cobb stands over Shingo with the belt.

Master Wato and Kota Ibushi versus Bushi and Tetsuya Naito

Ibushi pins Bushi wtih a Komyago. Ibushi and Natio have a chat.

Hiromu Takahashi versus Desperado – Best of the Super Juniors Finals