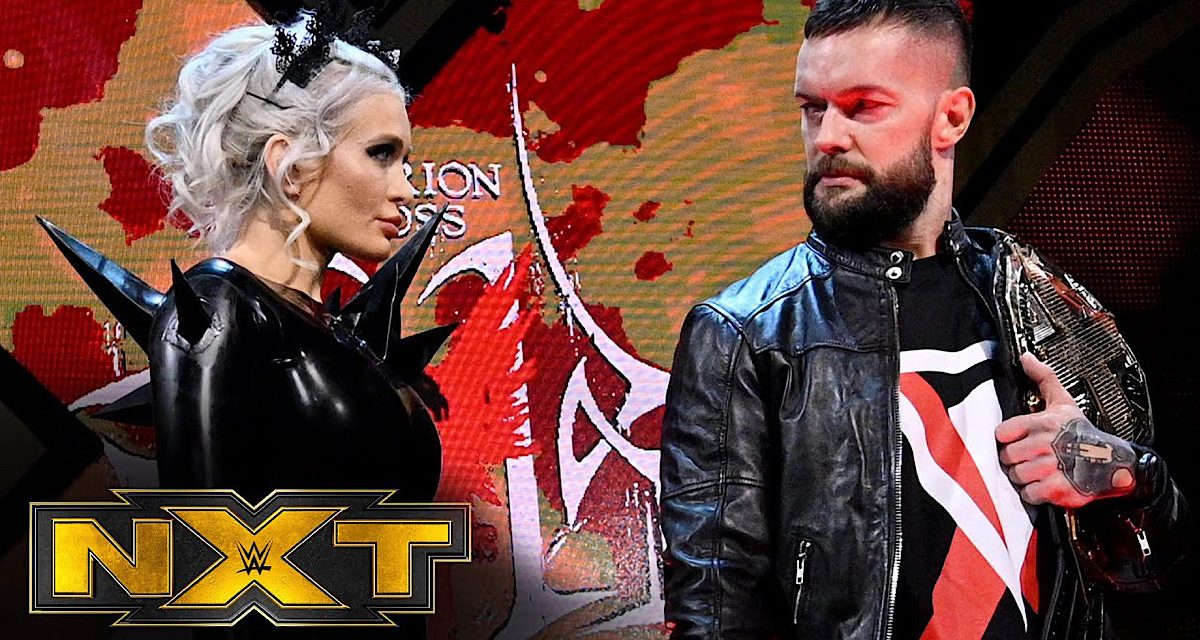 Days after the double-cage showdowns at NXT TakeOver: WarGames, the yellow brand began rebuilding towards its next special event, New Years Evil on January 6. Headlining this show, assuming no further cursed injuries arise, newly recovered NXT Champion Finn Balor will defend against a later-determined opponent for the belt.

Balor returned to NXT television proceeding the TakeOver recap cold-open, but before getting into his promo, Pete Dunne, Kyle O’Reilly and Damian Priest interrupted with their claims at gold. The three challengers started bickering amongst themselves — Dunne asking Priest, “Aren’t you the geezer who couldn’t even beat Leon Ruff?”

Balor then announced his open challenge for January 6 to whoever was deemed worthy enough, and perhaps the returning Karrion Kross will check the boxes. His significant other Scarlett made the duo’s presence known, hotter than ever. And whoever challenges Balor at New Years Evil — whether it’s Kross, Priest, O’Reilly or Dunne — the match will undeniably slap.

Priest called Scarlett out, mentioning how she’s always doing Kross’s work for him before cutting to commercial. Afterwards, Dunne was interviewed backstage before getting mauled by Killian Dain, revenge for getting taken out last month. More than 15 minutes into this episode, there still hasn’t been a match….

These two were friends and teammates recently, but not even smiles were exchanged here. The competitors have a quick back-and-forth with some cool maneuvers and strikes; it’s just tough getting into a no-stakes exhibition. They roll though cradles and whatnot until Atlas gets the oneup on Scott who refuses a handshake and walks off looking angered. Maybe this leads to an eventual turn and rehashing of the true “Swerve” of old.

Ever-Rise pick and choose their spots while the opposing teams battle and brawl. Seeing them show some character and charisma has been pretty nice, specifically tonight as they slip in between the demolition derby. These types of triple-threat tag matches are difficult to follow, and visually it’s just messy. Eventually, GYV deliver the Ticket to Mayhem finisher on Parker for the pinfall victory. GYV debuted only weeks ago, yet they already feel like simply another team on NXT’s bland tag roster.

A video package with interviews from last Sunday’s WarGames competitors displays the wreckage from the men and women’s double-cage matches. Notably, Bobby Fish and Candice LeRae suffered injuries from their respective bouts.

Toni Storm is interviewed backstage and asked about her attack on Ember Moon before WarGames. Storm claims, “She stole my thunder.” NXT Women’s Champion Io Shirai interrupts and cheap shots Storm for no good reason, and the brawl migrates into the ring. Storm tries to retreat, but Moon forearms her from behind. These babyfaces have morale issues.

As the competitors lock up, rival Timothy Thatcher takes a ringside seat, mirroring what Ciampa did weeks ago. This is 2K Universe Mode booking, and it’s ridiculous. Following commercial, Ciampa makes his comeback making the matchup neck-and-neck, but he’s foiled by Thatcher’s student who attempts a run-in. Ciampa overcomes and hits The Willow’s Bell on Grimes for the pinfall victory. Grimes does what Grimes does best — saving bad angles, and brashly gets in Thatcher’s face. He inevitably gets pummeled as Thatcher walks off.

Raquel Gonzalez is interviewed backstage. She cuts a decent promo and has a large presence. Pull the trigger on her!

This week’s edition of the odd oriental storyline sees Boa and Xia Li caned, trained and punished until they’re both bleeding from the mouths and knuckles. Still odd, but the production on these things are incredible.

The Gargano Family — new North American Champion Johnny Gargano, Candice LeRae, Indi Hartwell and “adopted son” Austin Theory enter the ring. They’re dressed all fancy looking like an upper-class, quirky caucasian family — so much heel heat! The naturally-hilarious visual of these four together makes them a success already. Gargano cuts the promo, feeding off his family’s presence, and it finally feels like annoying Johnny Gargano is working.

Damian Priest interrupts, but from behind is the returning Karrion Kross! He powerbombs Priest through a nearby table before exiting the building and driving off with Scarlett. With a face of fury, cool leather outfit and sick ride, the more human side — the small amount — of Kross is looking very promising. Also very promising, Kross vs Priest!

The student who attacked Tommaso Ciampa, whose name is revealed as Tyler Rust, is met backstage by Malcolm Bivens for a business opportunity. Big night of returns here.

Dain actually isn’t flanked by partner Drake Maverick, so hopefully that’s been scrapped. He manhandles his opponent throughout the opening minute before headbutting himself into the ringpost. Dunne takes control thereafter until Dain makes the exhausted comeback. The latter hits a flurry, but NXT Tag Champions Danny Burch and Oney Lorcan run down, met by Drake Maverick. Both teams are still together then. Dain takes out the goons but runs into Dunne’s Bitter End for the three-count.

Former North American Champion Leon Ruff is approached by the current Johnny Gargano and Austin Theory. They’ll face Ruff and his mystery partner, who shortly reveals himself to be Kushida, next week. A serious Ruff-Kushida partnership wouldn’t be too bad, honestly.

Commentary’s Wade Barrett continues to heavily put over Gonzalez, rightfully so. She overpowers her opponent and stays upright until Moon eventually chops down the tree before commercial. Gonzalez regains control and stretches Moon out, but the latter once again switches the momentum and Suicide Dives onto the floor. She attempts The Eclipse but gets caught in midair, succumbing to the Powerslam of Gonzalez for the pinfall. Out comes Toni Storm to attack the downed Moon, but making the save is Rhea Ripley. Again, Ripley and Gonzalez stare each other down like they’ve never met before, except they have, many times.

Despite the night of returns, this show was almost lifeless. Brief highlights with the short appearances in Finn Balor, Karrion Kross, even Johnny Gargano actually. But the rest is nothing to write home about, a consistent pattern for NXT television.