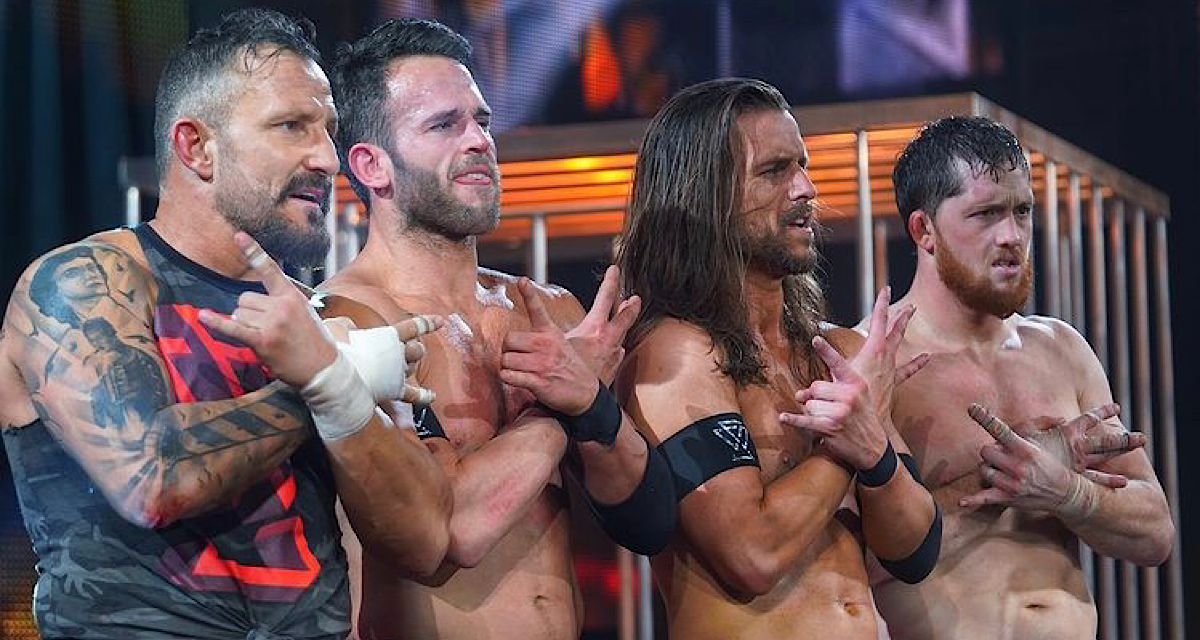 Another NXT TakeOver: WarGames is history, with The Undisputed ERA proving once again that they’re the greatest around. Tonight marked the fourth WarGames event under the NXT banner, and the ERA walked into the double cage for their fourth year straight. Conversely, their opposing leader in Pat McAfee entered his first and was ready for war!

Despite the concern, NXT stuffed the colossal WarGames structure into the Capitol Wrestling Center — although the spectacle of WarGames inside a packed arena was gone and missed. The construction crew put their heads together here, introducing a unique contraption and ramped entrance way to allow the annual NXT WarGames tradition to continue in 2020.

Captain Blackheart rides out with a gigantic toy tank which somewhat undermines the entire reasoning for this match: Blackheart getting revenge on LeRae for destroying her original tank. The tank-meister and Moon beat down on Kai until the artillery Gonzalez comes in, cleaning house. Out comes Ripley, then Storm who introduces some kendo sticks and exposes the turnbuckle steel as the heel squad takes over once again. NXT Women’s Champion Io Shirai brings a ladder and chairs inside, ignoring her teammates getting pummelled, which paints her deserving of the outside attack by the illegal Indi Hartwell.

Shirai finally recovers and appears atop the cage and dives onto the mass, officially starting WarGames! The following minutes are a brawl with chairs, kendos sticks and garbage cans like somebody button-mashing in a video game. Some standout spots are Moon Eclipsing onto two chairs and Blackheart Sentoning off the mini-ladder. Gonzalez slams Shirai through a ladder bridge to end this matchup rather abruptly, but overall this opener was pretty fun. Judging by the carnage left inside the double cage, whoever produced this must really hate furniture.

The edgy Finn Balor vignettes are evidently present at TakeOvers too. The NXT Champion confirms his return to NXT television this Wednesday.

The buildup to this bout and usage of these two badasses has been mediocre. Undoubtedly, the actual matchup should deliver. They mat-wrestle until Ciampa lets loose with strikes and limb-targeting, but Thatcher turns the tides with an uppercut. He works down Ciampa with unrelenting pressure before the latter comes back with four or five closelines and a Superplex. Side note, the piped-in crowd sounds are as brutal as the action here; Thatcher’s ear gets busted, and Ciampa makes the blood drip with direct punches! Ciampa eventually hits Willow’s Bell for the pinfall victory.

Ciampa and Thatcher stare each other down following their encounter. The loser walks away with his tail tucked and ear bloody.

Grimes insists on using his own strap before he blindsides his opponent. Clearly, since Lumis is apparently mute, Grimes has carried this entire feud. Conversely, Lumis throws the weaselly one around the ringside area before Grimes switches the momentum. He places a sack onto his opponent’s head and whips away; as one would expect, Lumis gets his strap offense in too. Now Grimes brings a chair into the Strap Match, and this thing loses its significance and prolongs even further. Admittedly, the finish of Grimes being tripped by the strap and diving headfirst into the chair was cool. Lumis chokes his opponent out for the submission victory, and for an embarrassing comedy feud like this one, the match was alright. However, way too long and dragging — no pun intended.

The Capitol Wrestling Center lights flickers, and the broadcast cuts to an eerie vignette with a vulture. “Tick tock” says the mystery man who’s obviously the returning Karrion Kross.

The matchup starts quick with Gargano trying to capitalize on the champion. But don’t underestimate Ruff; he fends for himself with some rope tricks and aerial maneuvers. The towering Priest gets annoyed by Ruff’s constant interjections and throws him through the barricade which ultimately takes him out; officials help him backstage. So, this triple threat turns into a one-on-one like Gargano-Priest hasn’t been seen enough already. Thankfully, Ruff makes his triumphant return with a hot comeback. Priest is too overpowering though and takes control. Before he can capitalize on Gargano, an actual army of Ghostfaces interfere, whose jobs are to evidently make Priest look like an unstoppable monster. However, one Ghostface hits Priest with a lead pipe allowing Gargano to hit One Final Beat on Ruff for the pinfall victory. Bravo to Ruff for hanging with these guys and having a short-but-sweet title reign.

The game-changing Ghostface takes his mask off… it’s the returning Austin Theory! Looking at the new pairing of Austin Theory and Johnny Gargano, it’s clear they’re meant to be. They look like cousins or something.

O’Reilly and Dunne impress with some mat-wrestling in the opening minutes. Lorcan enters next, and the goons hound on O’Reilly. When the counter ends, Fish makes the save followed by Burch who brings in two cricket bats since every other weapon had been overused tonight. This time, Strong makes the short-lived comeback before finally McAfee makes his WarGames debut and overall just second NXT match! He brings in four different tables, all spray painted with the names of each ERA member. Strong’s doom is realized first as McAfee delivers a legitimately perfect Moonsault through the table.

The final entrant Adam Cole clears the floor. And before he starts pummeling rival McAfee, the action breaks loose. The latter comes from behind and Chopblocks Cole, applying the Figure Four while the goons fend off the ERA. Eventually, the ERA regroups and sends Dunne and Burch through a table. Specifically, Cole sends McAfee flying off the top rope and through the wood. They relay strikes onto Dunne, Burch and Lorcan “like a well oiled machine.” They gang up, getting sweet revenge on McAfee; one of the best heels in wrestling is getting his comeuppance!

The goons fight back though, and overhead, atop the cage, McAfee swantons onto the mass! O’Reilly kicks out from Dunne’s Bitter End, McAfee low-blows Cole, and Fish sends Burch through the final table. Looking to finish things off, Cole hits Panama Sunrise on McAfee for two! An absolute barrage of finishers concludes with O’Reilly’s top-rope knee onto a chair for the victory. This was war!

The two WarGames matches, specifically the main event, were outstanding. The Undisputed ERA boys have become synonymous with the modern double cage for good reason — they’re fantastic. The middle card was just alright, so the WarGames matches really carried some weight.