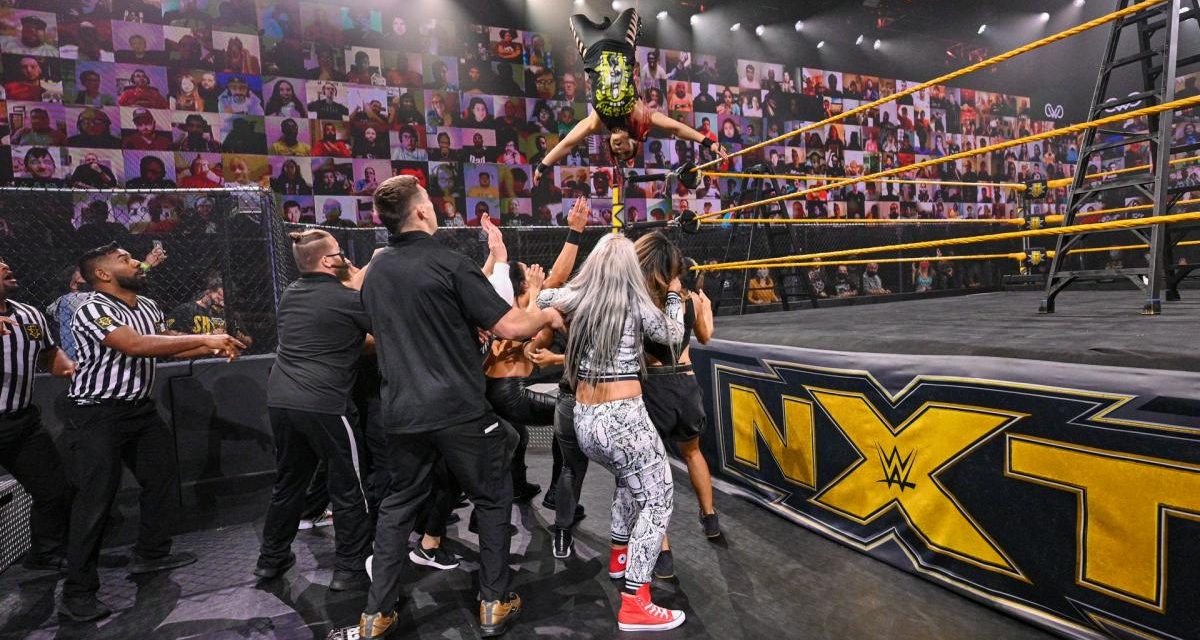 Opening tonight’s episode, NXT roster members and backstage personnel filled the stage in honor and remembrance of the late Pat Patterson. The broadcast then cut to an emotional video package of Patterson’s career highlights along with backstage photos of his interactions with decades of talent. But the finishing touch to this all-time tribute package was the tune playing with it: Frank Sinatra’s “My Way”, a song that encapsulated Patterson’s career, and one that he periodically sang on camera too!

This would evidently remain the highlight of this week’s show — the precursor to NXT TakeOver: WarGames on Sunday. Following an awesome WarGames advantage ladder match between Pete Dunne and Kyle O’Reilly last week, NXT tried again with Shotzi Blackheart and Raquel Gonzalez for the women’s WarGames match. Without saying, this didn’t match the initial ladder war but definitely had its moments. Certainly WarGames will continue the tradition of reliable, great wrestling on TakeOvers just as tonight continued the tradition of weak go-home shows.

Johnny Gargano joins commentary preceding the triple-threat championship match between himself and the initial team at TakeOver. Priest takes control before spotting Gargano’s “Ghostface” buddy sitting ringside, allowing Escobar to capitalize with a Suicide Dive. After being worked down for some time, Priest makes the short-lived hot tag to Ruff with the roles reversed minutes later. Priest attempts The Reckoning, but Ruff makes the blind tag. The former hits the finish, and Ruff delivers a nice Frog Splash for the pinfall victory.

Shotzi Blackheart, Ember Moon, and Rhea Ripley are filmed in a movie-like vignette hyping their WarGames match on Sunday. Later on, Team Candice LeRae is interviewed backstage for their response.

Speaking of movie-like vignettes, a sharp-dressed Undisputed ERA talk about the faction’s history and their altercations with Pat McAfee before WarGames on a “night out”.

Maybe this week Grimes can regain some legitimacy. Somehow, the unimpressive Grey gets some decent offense before Grimes hits The Cave In. The victorious Grimes takes his strap, preparing for his Strap Match with Dexter Lumis at WarGames, and lashes his fallen opponent with it. While Grimes is distracted with his self-indulgent promo, Lumis appears and turns the tides — strap in hand.

Before the following matchup begins, commentary notes Pat Patterson as an inspiration to Jake Atlas — both being openly gay professional wrestlers, dedicating the bout to him.

The competitors chain wrestle and evidently let emotions fly as Atlas fires up. Picture-in-picture, Pat McAfee and his goons are filmed arriving at the Capitol Wrestling Center. Meanwhile Nese has control but misses the running knee, allowing Atlas to deliver the Cartwheel DDT for the victory. He joins correspondent McKenzie Mitchell ringside for an interview letting the Cruiserweight Champion know he’s coming for the title. Along with the aforementioned dedication, Atlas proved himself a babyface to get behind.

Pat McAfee, Pete Dunne, Danny Burch and Oney Lorcan make their group entrance. Once again, McAfee is absolute gold on the microphone: “First of all, I’d like to say rest in peace to Pat Patterson — a man that I have the utmost respect for… Now, on the complete opposite end of the respect spectrum — those of which I have zero respect for. That would be you, every loser wrestling fan at home and in the Capitol Wrestling arena, and most certainly the Undisputed ERA…” He trash talks the ERA, flexes his bling, and puts over his goons with style. Not even hyperbole, McAfee has become one of the best talkers in wrestling today!

The surreal videos of Boa and Xia Li continue. This time they’re forced by “Master” to dunk themselves into a tank of water before being caned in the back. So odd.

Before the previously scheduled match with Ever-Rise begins, former champions Imperium return and jump the team from behind, calling out GYV. Imperium, Fabian Aichner and Marcel Barthel, take opening control. In the weirdest break spot in recent memory, Aichner and Barthel crash outside, and the four competitors begin arguing with each other; the referee holds them back before commercial. Things evidently pick up though, as the teams trade reversals and maneuvers — Aichner really impressing with unbelievable strength, recovering from a timing mishap. He eventually dives ringside before Ever-Rise returns and ambushes the competitors. The match and segments ends flat with practically no follow-up.

The follow-up appears; Ever-Rise is followed backstage and into their vehicle. They say that they’re fed up!

Another live session of Thatch-As-Thatch-Can is centered around “dealing with distractions” after Timothy Thatcher lost last week’s matchup due to Tomasso Ciampa’s presence. Speaking of the devil, Ciampa magically appears in-ring and goads Thatcher, but the latter wants no part. Eventually, Thatcher succombs and gets socked in the mouth before his student helps out, allowing Double T to choke out Ciampa.

Thatcher is interviewed backstage and praises his student for helping out. Except in the background, that student receives an invitation from a returning Malcolm Bivens.

The two women brawl around the ring using the ladders, barricade and announce table as weapons. A clear pattern throughout the match is that supposed stiff spots just aren’t hitting, whether it be execution or selling. At one point, they vaguely fall off the ladder — which might’ve been a mistake judging by Blackheart’s ankle injury. Nevertheless, she delivers a scary-looking Meteora on the floor before Candice LeRae, Dakota Kai, and Toni Storm check on their partner. Rhea Ripley and Ember Moon even the odds as officials try to separate the mob. Gonzalez climbs the ladder, but NXT Women’s Champion Io Shirai makes the save, Moonsaulting onto the bodies. Blackheart climbs the ladder and claims the briefcase to win the advantage.

The babyface team poses on the ladder, confirming that NXT Women’s Champion Io Shirai is the final member of Team Blackheart on Sunday’s NXT TakeOver: WarGames.

NXT has really struggled with go-home shows, and I’m practically less excited for WarGames than I was before. The women’s ladder match didn’t level with last weeks — although that would’ve been hard for anyone to accomplish. Neither the North American Championship scene or men’s WarGames teams got physical, and that really isn’t a sound WarGames buildup. The Pat Patterson tribute was the highlight of this show.