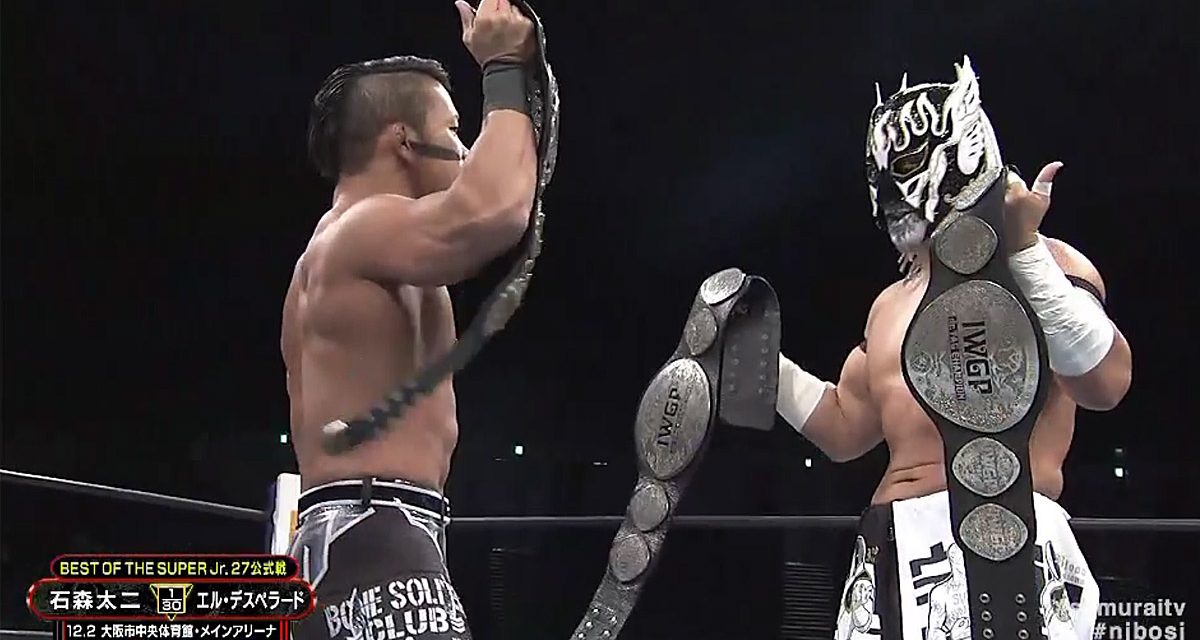 It was an extremely bad day at the office for IWGP Junior Heavyweight Tag Team Champion, Taiji Ishimori. For the second time in the Best of the Super Juniors 2020 tournament he was bested by another competitor. This time it was El Desperado. Desperado, who seems to be getting more and more of a solid push in NJPW, took on his Bullet Club rival on night seven.

Both men proudly showed off their championship belts as they jaw-jacked in the middle of the ring. Desperado threw his shirt into Ishimori’s face and drop kicked him out of the ring. On the floor, bounced him off the ringside barricades and a steel post as Ishimori begged off. The official admonished Desperado as he stomped on Ishimori’s throat.

Desperado kicked the barrier in front of Satoshi Kojima who had joined the commentary team. Perhaps Desperado doesn’t like Kojima hogging all the glory in his tag team matches with Tomoaki Honma either?

Desperado took his IWGP Junior Heavyweight Tag Team Championship belt and scraped Ishimori’s face with it. Desperado went for the pinfall but the official refused to count it. An angry Desperado choked out Ishimori on the mat with both hands around his throat.

Ishimori took the match back by throwing Desperado into the ringside barrier. The two men wailed on each other back in the ring. Desperado charged Ishimori into the official knocking him out of action. Desperado swung one of the tag belts at Ishimori. Ishimori bashed Desperado with a running knee strike. Ishimori picked up the belt positioning himself to smash Desperado. The official grabbed onto the belt distracting Ishimori. Desperado punched him in the “lower-abdomen” and pinned him with Pinche Loco.

The only other NJPW superstar to beat Ishimori in the tournament thus far is for the former champion Hiromu Takahashi.

Guess what? Kojima wins with his Lariat on Kidd once AGAIN!

Eagles flips Taguchi’s ankle lock into his own submission finisher.

Bushi hits a standing MX and a second rope MX to win the match.

Shp pins Hiromu with a Shock Arrow in a stunning victory.