SmackDown: All about respect 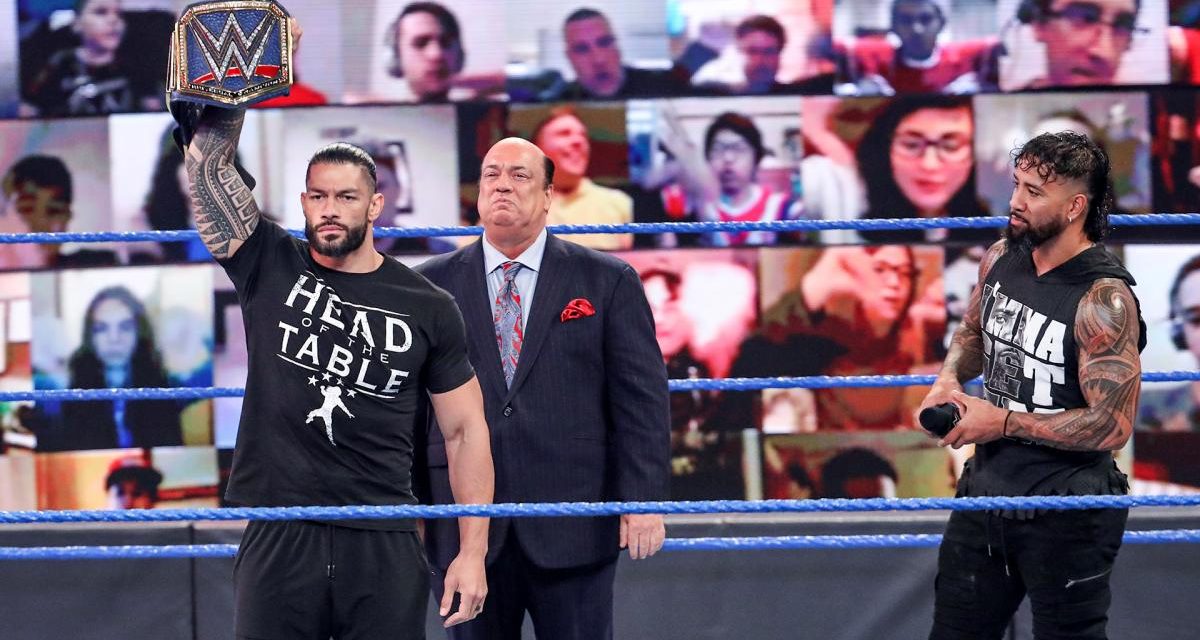 Featuring two matches with champions that, for some reason, aren’t championship matches, this November 27th episode of SmackDown showcases the fallout from Survivor Series.

We start out the show with an appearance by Jey Uso, who’s annoyed that people are talking about The Undertaker’s farewell more than Roman Reigns’ victory at Survivor Series. Roman interrupts him to play a recap of Jey Uso’s loss as part of Team SmackDown at Survivor Series, as well as his interference in Roman’s match against WWE Champion Drew McIntyre. He asks Jey if he ever asked for his help, to which the answer is no. Roman does his whole spiel about how Jey lost because his teammates didn’t respect him. Roman leaves Jey in the ring after chewing him out some more. Otis comes out as he has a match coming up next, and Jey brutally beats him with a chair, presumably to instill some of that fear/respect his cousin told him about.

Dawkins starts off against Ziggler, but he quickly tags in Ford who lands a dropkick on the Show-Off. Roode comes in to interfere, and Ford tags in Dawkins, who takes out Roode. Dawkins lands a punch on Ziggler and tags in Ford, who looks for a Frog Splash, but Roode distracts him long enough for Ziggler to collect himself and roll out of the way as we go to commercial.

When we come back, Roode is focusing on the midsection of Ford that was injured at Survivor Series with a backbreaker for 2. The Glorious One locks in a submission on Ford, but he fights out of it. Roode tags in Ziggler, who hits a Famouser on Ford for 2. Ford fights back but gets stopped cold by a kick to the ribs.

Ziggler looks for an attack in the corner, but Ford avoids it. Both competitors tag in their partners, and Dawkins goes crazy on Roode, dropping him with clotheslines and a massive suplex. He hits his spinning stinger splash/bulldog combo on Roode, and then slams him with the Annointment. He tags in Ford, who hits the Cash-Out Frog Splash. His injured ribs hold him back from pinning Roode immediately, allowing Ziggler to break up the pin. 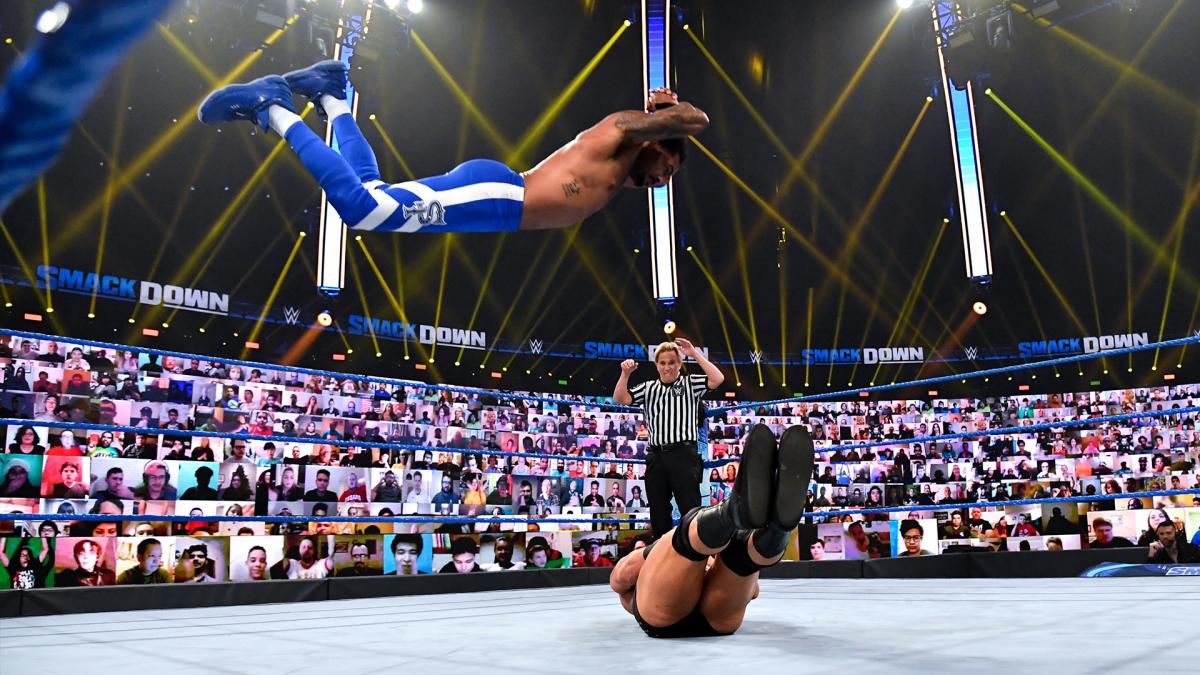 Backstage, Daniel Bryan talks to Kayla Braxton about his match against Sami Zayn. He says that tonight, he’s going to break Sami’s delusions of grandeur. Next, she interviews the Mysterios and Murphy, asking them if they’re happy that the Seth Rollins chapter of their life is over. King Corbin interrupts, saying that Murphy is only riding the coattails of the Mysterio name while it still means something.

Sami Zayn comes out and talks about how he doesn’t support Thanksgiving, as it’s a holiday that celebrates the atrocities carried out upon the Native-American people. And he gets booed, which might be worse than when Daniel Bryan got booed for supporting recycling. He goes on about how WWE Management is trying to sabotage him, and Daniel Bryan comes out to get this match underway.

For starters, can we all agree that beating a champion to get a title shot is the most idiotic concept that has existed in WWE since the original NXT? Sami starts by skirting around the ring and avoiding Bryan by hiding in the corner and under the ropes. Bryan finally gets his hands on him and locks him in a painful arm submission. Sami escapes it but gets caught with a dropkick for 2. Sami tosses Bryan outside, and takes him out with kicks when he comes back in.

When we come back, Sami is beating down Bryan in the corner. He drops him with a clothesline for 2, and attempts pins on the Yes! Movement leader twice more in frustration. He looks for an attack in the corner, but Bryan backflips over him and takes him out with a running elbow. Bryan lands some kicks and punches in the corner, and then stacks him up on the top rope and delivers an avalanche hurricanrana for 2.

He looks for the Yes Kicks, but Sami rolls out onto the apron. He meets the champ on the apron, but Sami slams him into the ringpost and then delivers a brutal brainbuster on the apron. Bryan barely gets back inside before the 10 count, but when he does, he’s met with a Blue Thunder Bomb for a close 2. Sami talks some trash to Bryan, but Bryan catches him in an armbar, and then transfers into the LeBell Lock. Sami is able to shuffle over to get to the bottom rope. 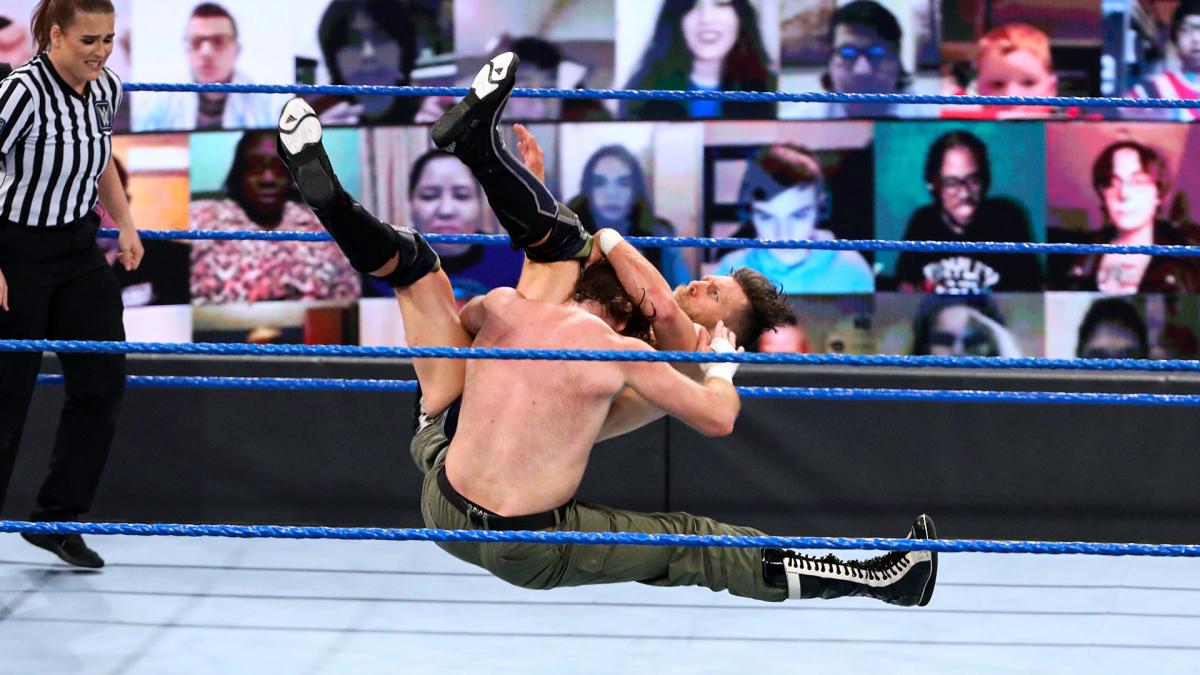 He goes outside, and Bryan meets him with a suicide dive. He runs to the backstage area to escape Bryan, but Bryan follows him there. However, only Sami comes running back to the ring to beat the 10 count. Bryan doesn’t return, and the champ wins. We go backstage to see Jey Uso attacking Bryan, and Kevin Owens shoves him off. Jey runs away to Roman’s side, and K.O confronts him, saying that for someone who says he values family, he treats his family poorly. Roman says that K.O doesn’t look at him with fear, and he tells Jey to go fix that.

With Bayley (who’s sporting a team SmackDown captain armband) on commentary, the two competitors trade rollups before Natalya gets aggressive and beats Belair down in the corner and hits the EST of WWE with a suplex. She goes for another, but Belair turns it into a rollup for 2. Natalya delivers a discus clothesline for 2 and then locks in a surfboard submission, which Belair turns into a pin for 2. Belair spears and beats down Natalya in the corner, and then dumps her outside. 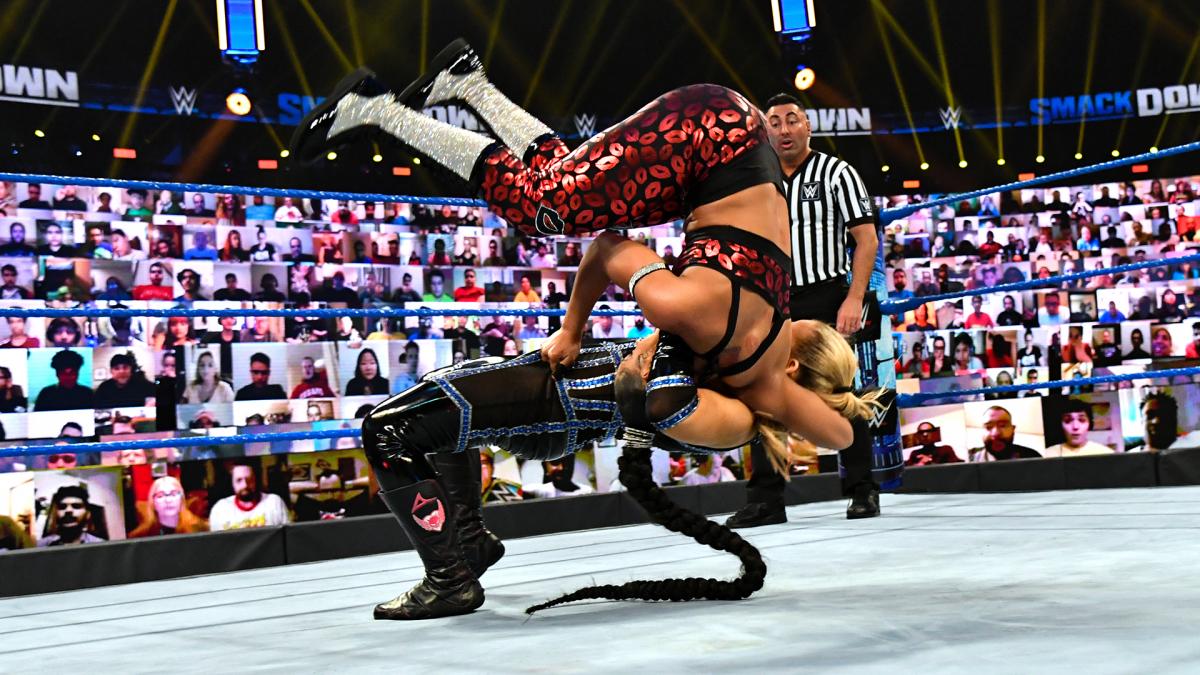 Natalya with a suplex to Bianca Belair. Photo: WWE

She looks to attack Natalya, but she ducks and the EST of WWE hits Bayley instead. Natalya takes out Belair and brings her back inside. She looks for the Sharpshooter, but Belair shoves her away and into Bayley, who had climbed the apron in an attempt to interfere. Belair rolls up a distracted Natalya from behind for the 1,2,3.

King Corbin VS. Murphy (with the Mysterios)

Corbin starts off using his power advantage, dropping Murphy with a clothesline. The Mysterios keep jumping up on the apron to distract him, and Corbin starts to get frustrated. He goes for his ring around the ringpost clothesline, but Aalyah stands in his way, allowing Murphy to hit a wrecking ball dropkick on the King. He delivers a kick and looks for a meteora, but Corbin catches him. He escapes the King’s grasp and slams him into the steel steps, but when he brings Corbin back into the ring he gets caught with a Deep Six. 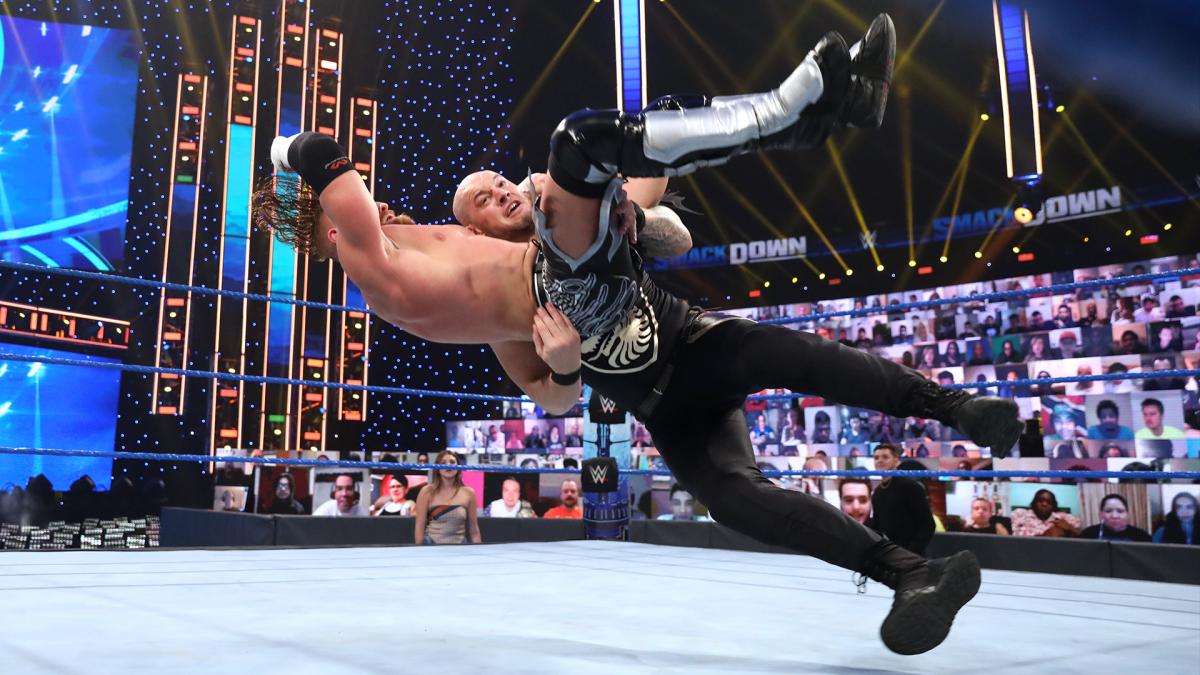 I feel like mid-Deep Six snapshots are the new STF snapshots in regards to funny faces. Photo: WWE

Rey continues the trend and distracts the ref and Corbin so no pin can be made. Corbin beats down Murphy with right hands, and Dominik once again gets on the apron and berates Corbin. Corbin goes to the ropes, but Dominik grabs his leg to stop his momentum, allowing Murphy to hit a knee strike. Corbin is close enough to get his foot on the ropes, but Dominik shoves it off, allowing Murphy to get the victory. Incredibly heelish tactics from the Mysterios tonight. King Corbin grabs a mic and demands a rematch with Murphy next week, saying he’ll “be prepared.”

Backstage, Sami Zayn tries to shoo Big E and Apollo Crews away so he can do an interview. He says they should show him respect for his “10 second victory” over Bryan, which is the same way he beat Crews. Big E responds with a crushing handshake that lasts, coincidentally, 10 seconds. Sami cancels his interview and goes to nurse his poor hand.

Carmella talks about how things aren’t like they used to be, how now everyone does what she asks. She snaps for her champagne, and a hand with some familiar “BOSS” knuckles on them hands it to her. Sasha Banks splashes her with the champagne and locks her in the Bank Statement until officials pull her off, getting a measure of revenge on Carmella.

With Roman watching backstage, Jey starts out with his recent aggression, but unlike his recent opponents, Owens matches his aggression, beating him down and slamming him into the barricade. K.O looks to toss Jey into the steel steps, but Jey reverses it. He brings Owens back in and beats him down, wrenching his arm on the ropes.

Owens fights back with some forearms, a clothesline, and a senton, but when he goes for a spear in the corner, he misses the mark and goes straight into the ringpost. Jey looks for a suicide dive, but Owens catches him and sends him into the ringpost, and then over the barricade with a superkick as we go to commercial.

When we come back, Owens is diving onto Jey on the outside with a Senton, and he brings him back in to pin him for 2. Jey goes out to the apron and hangs Owens’ arm up on the ropes, and then delivers an armbreaker to K.O. He continues to focus on the arm, locking in an armlock. Owens looks to fight back, but Jey slams him down. He looks for a running hip attack in the corner, but Owens moves out of the way and delivers a superkick to Jey. He lights up the chest of Jey with chops, but when he looks for the Pop-Up Powerbomb, his arm gives out on him, and Jey capitalizes with a superkick for 2.

Jey looks for the Uso Splash, but Owens gets the knees up and then delivers a pumphandle Ushi-Goroshi for a close 2. K.O goes for the Stunner, but Jey avoids it and throws Owens arm-first into the ringpost.

He decides he’s had enough and grabs a chair, beating down Owens, causing a disqualification. He looks to finish the job with a superkick, but Owens hits a Stunner. He takes his turn, beating down Jey with his own chair. He calls out Roman Reigns, saying that he should take up his problems with him face to face, before hitting Jey with one last Stunner. The show ends with Kevin Owens staring defiantly at the camera, and Roman Reigns staring back at his TV screen.

This was a really average show, didn’t really jump out at me but I didn’t dislike it either. The two non-title matches annoyed me, but that was balanced out by my enjoyment of the Mysterios’ tactics.