Chaos climbs back to the top of World Tag League 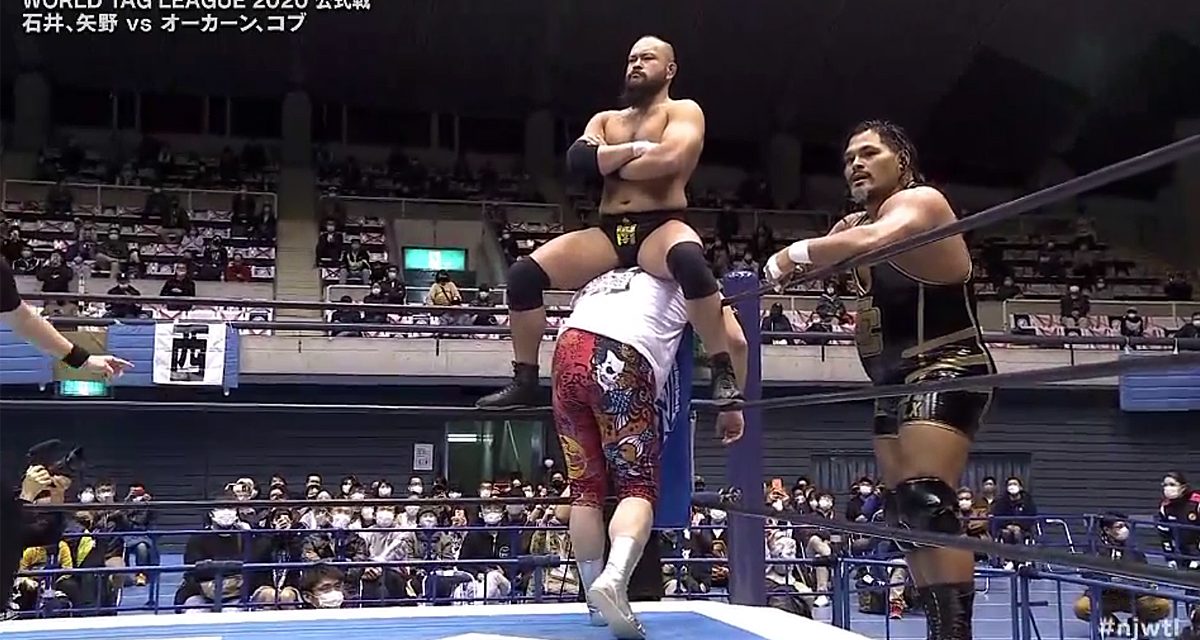 On night five of the World Tag League tournament, the Chaos team of the sneaky Yano Toru and the powerhouse Tomohiro Ishii fought their way back into the top three with Shingo Takagi & Sanada and Taichi & Zack Sabre Jr. It was no walk in Ogasawara Park though as they had to fend off the challenge of the Empire squad of The Great-O-Khan and Jeff Cobb.

Empire started the match by attacking with double haymakers and German suplexes before the bell can even ring. Yano tears off a turnbuckle pad and hits Cobb with it. Steely-eyed Cobb no sells the blows. Yano is shocked. Cobb takes both Ishii and Yano down with shoulder tackles and a double suplex. Yano escapes to the floor but that doesn’t stop the punishment. Khan meets him there slamming him to the steel barricade with his claw hold. Ishii hits him from behind and a slugfest between the two brutes erupts on the floor. 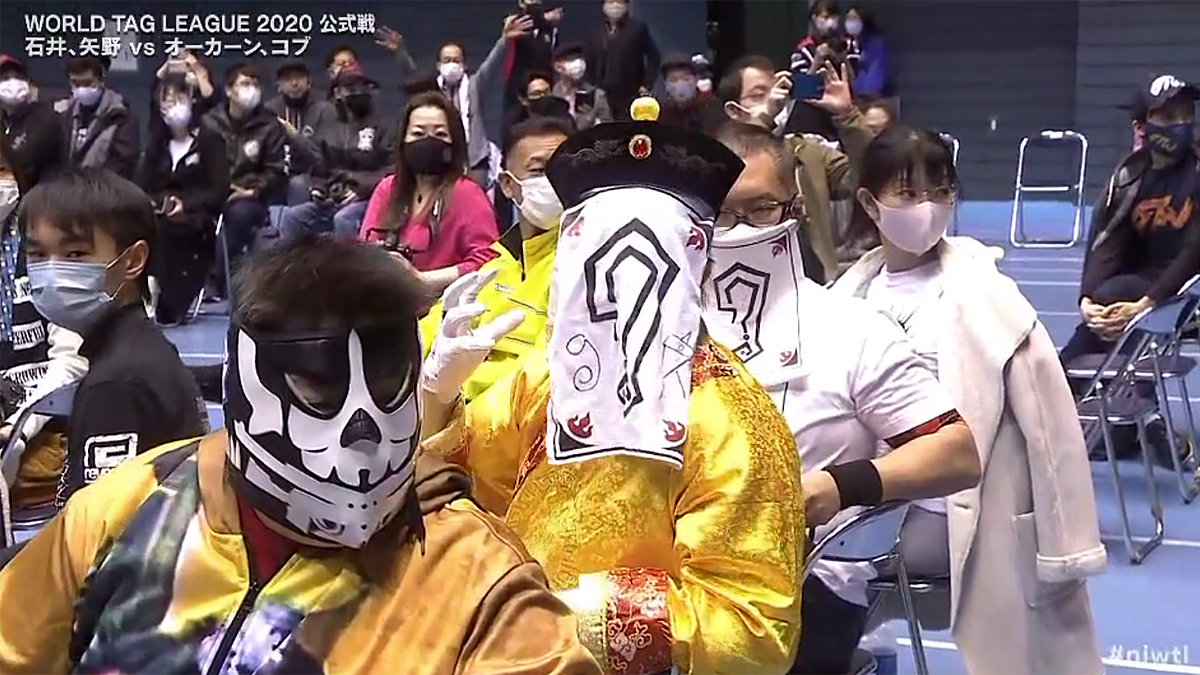 The Great-O-Khan has some fans in attendance. Courtesy: NJPW.

Cobb lays out Yano with a backbreaker back in the ring. He tags in Khan so he can stomp a mudhole in a helpless Yano. Yano screams in agony as the claw hold is applied. Khan picks up Yano, slings his limp body over a turnbuckle and then just sits on him. Khan dares Ishii to come into the ring and save Yano.

Khan rushes across the ring knocking Ishii off the ring apron. Khan and Cobb keep Yano out of the reach of Ishii…for obvious reasons. Yano yanks Cobb down by the hair hot-tagging in Ishii. Ishii and Cobb collide with neither giving ground. Khan races in knocking down Ishii with one shot. Ishii fights off both men. He shoulder tackles Khan to the mat and trips up Cobb so he falls on Khan. 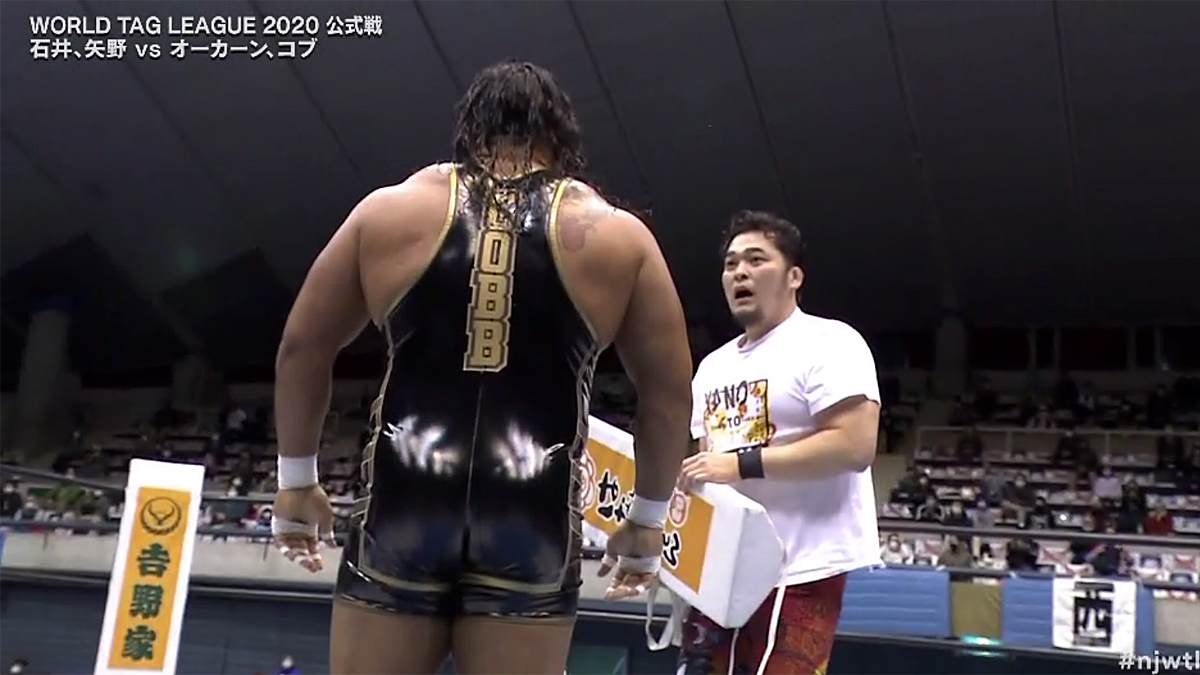 Cobb gets hit with a turnbuckle pad and doesn’t flinch. Courtesy: NJPW.

Once Yano tags back in Khan lowers the boom on him with his claw. Yano counters with a claw of his own so that Khan cannot slam him. Yano shoves Khan into Ishii. Ishii clotheslines him. Yano punches Ishii in the “lower abdomen” rolling him up for the pin.

The streak continues. Kojima Lariat on the Young Lion. Pinfall.

Fale and Owens continue their comeback with another victory. Owens gives Henare a German Suplex as Fale strikes with the Grenade. 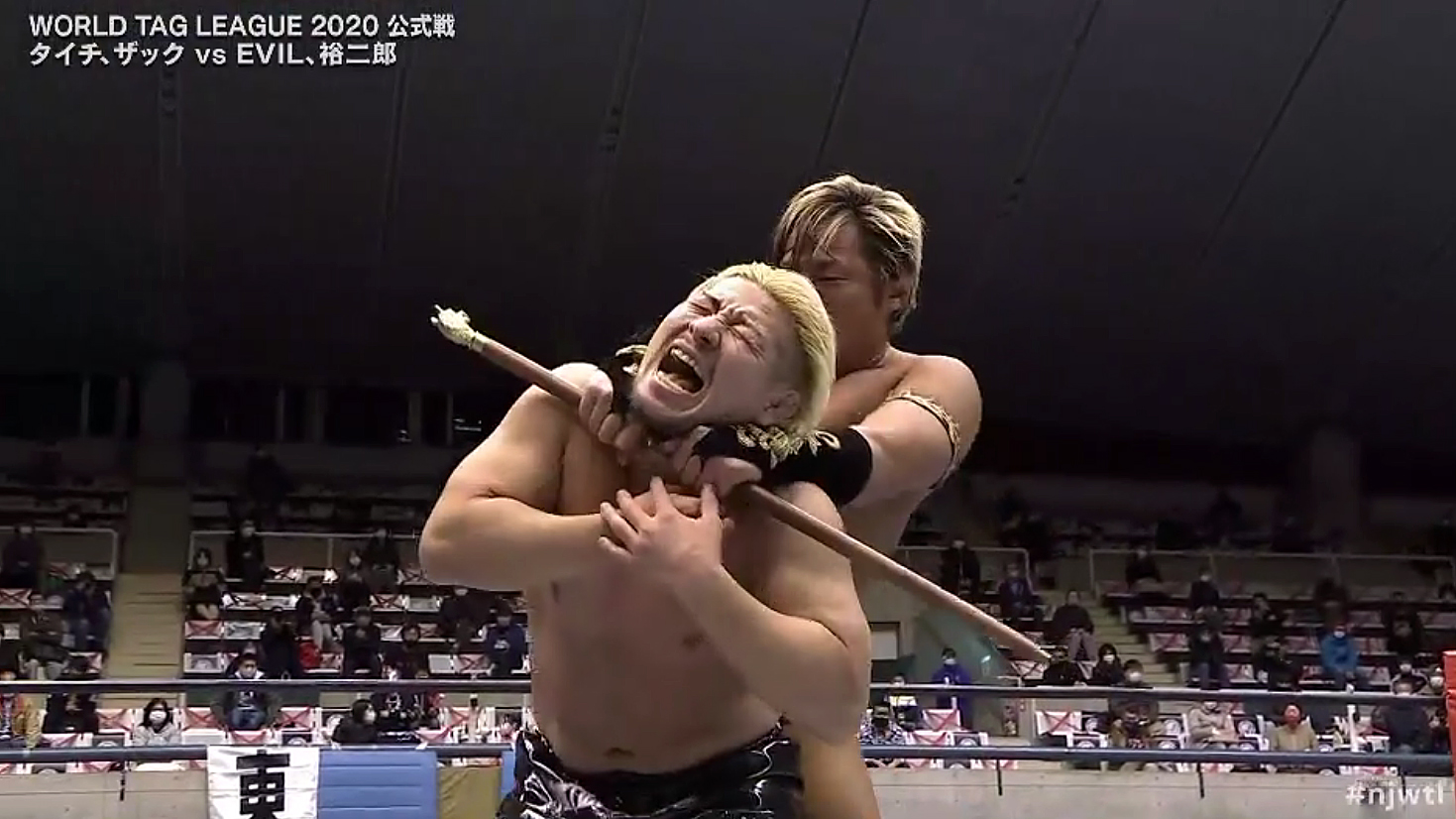 Taichi gives The Tokyo Pimp a taste of his own medicine. Courtesy: NJPW.

Juice dives off the apron bowling over Sanada. Finlay pins Takagi with the Acid Drop.

Yoshi reverses a Tonga Gun Stun into a roll-up.