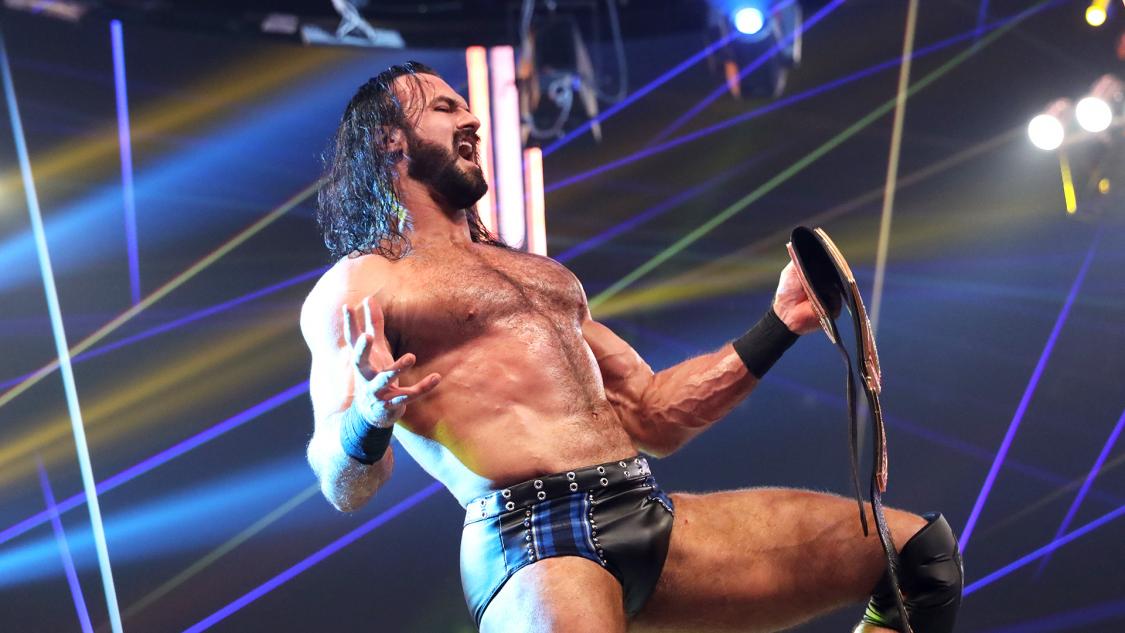 Survivor Series is this Sunday and Monday Night RAW is looking to shake things up. Tonight, there are two title matches that could change the looks of the champion versus champion matches. Drew McIntyre is getting his rematch against Randy Orton for the WWE title; Drew even showed up on Smackdown last Friday to confront Universal Champion Roman Reigns. Also, the New Day will have to defend their tag team title against The Hurt Business. Time to enter the ThunderDome.

Drew McIntyre leads of the show, but he isn’t dressed to wrestle, but to cut a promo. Drew loves Thanksgiving, a week from Thursday, and lists everything he is thankful for; like the ThunderDome. Drew talks about visiting Roman on Friday and how he will win tonight and then bring Reigns back to earth at Survivor Series.

Randy Orton interrupts via TitanTron; wanting to list what he is thankful for, like being a 14 time WWE world champion. Orton says he is the most fined and suspended superstar, but he is also the best ever. As McIntyre leaves, the Miz and John Morrison walk out on stage.

They join Drew in the ring, telling him that they will be in the front row of tonight’s WWE championship match. Miz teases that he will be holding the WWE title at the end of the night. In other delusions, Miz claims that the Fiend is scared of them.  Drew isn’t a patient man, stepping to Miz and Morrison. The two bail out of the ring as Miz talks about cashing in the briefcase tonight.

Lana wants to start the match, but Shayna tags herself in. She hits Dana with a backbreaker and a knee strike. She tosses Brooke out of the ring and teases Lana with a tag. Nia tags in. She holds Mandy Rose, allowing Baszler to stomp her elbow into the ring steps.

After a commercial break, Baszler sets up Brooke for the elbow stomp, but Dana counters, slamming her into the turnbuckle. The announcers tells us that Mandy Rose has been taken to the back. Asuka gets the hot tag, kicking Shayna in the face. Nia breaks the pin and dumps Brooke out of the ring. Baszler locks in the Kirifuda clutch, but backs into her corner, where Lana tags in. Lana with a split kick, but can’t get the pin. Nia yells at her to get out of the ring. Asuka with a kick to the head and applies the Asuka Lock. Lana taps out.

Backstage, AJ Styles is trying to keep his team on the same page. He knows they have the advantage over Team Smackdown on paper. They can’t let their egos get in the way. Styles wants them to come together with a tune up match, versus RETRIBUTION.

Charly Caruso tries to find out Mandy Rose’s condition from Dana Brooke, when Brooke is attacked by Reckoning from RETRIBUTION.

Bray Wyatt isn’t a fan of the Miz, calling him rude. He has nothing to fear, as Bray wants to offer him a lesson in manners. He wants to take on Miz tonight, but don’t get on his bad side. Bray has his friends help him get ready for tonight’s match.

Before the match, MVP announces that we will see the best versus the best at Survivor Series. They will win tonight and then put Smackdown out of business.

Kofi Kingston and Cedric Alexander face off to start the match. Alexander takes down Kofi with a waist lock. Woods tags in, taking down Cedric and Kofi follows with a splash. Shelton Benjamin tags in and Woods chops him into the corner. A drop kick only gets a two count for Woods. Benjamin answers with a clothesline and drops Woods with a spine buster. Kofi gets the tag, after Woods dodges a slam. Kofi with kicks and a cross body from the top turnbuckle. Benjamin catches Kofi on a Boom drop and hits a buckle bomb. Cedric tags in and comes off the top rope with a bulldog. Kofi kicks out as we go to break.

Benjamin forces Kofi into the corner, setting him up on the top turnbuckle. Kofi fights back, hitting a DDT. Both men are down and are then able to make tags. Woods takes down Alexander and then takes out Benjamin. Woods goes up top and connects with a missile drop kick. Alexander kicks out. Kofi tags in, coming off the top with a kick to the chest. Benjamin breaks the pin to save the match. Cedric takes out Kofi with a suicide dive. Benjamin slams Kofi into the ring post and rolls him into the ring. He hits an Angle Slam, but Kofi kicks out.

Alexander hits a brain buster, but Woods breaks the pin. Kofi floats over and super kicks Cedric. Shelton Benjamin is taken out by Kofi on the apron. Woods tags in and the two team up to hit Daybreak on Cedric. Woods covers to get the pin.

Sheamus calls Drew McIntyre over and wants to show him something. It’s Drew’s old wrestling gear. Sheamus then presents him with a Claymore sword.

Before the match, RETRIBTION says they are always one step ahead. Team RAW represents everything they are fighting against. Ali knows that Team RAW will eventually turn on each other. He hopes Styles is ready to go down with the ship.

After T Bar takes out Keith Lee on the apron, Riddle hits him with a Bro-ton. Strowman and Sheamus fight over the tag, causing Styles to intervene. Strowman shoves AJ away as we go to commercial.

Ali hits Riddle with a neck breaker. He stomps Riddle into the corner. Mace tags in, connecting with a big boot. Riddle catches a kick from Slapjack, but can’t do anything with it. Riddle finally gets the tag to Keith Lee, who cleans house. He pounces on Slapjack, sending him head of heels. He uses Slapjack as a battering ram. T Bar and Mace pull Lee out of the ring and gets taken out by Ali. Lee kicks out of the pin.

The Strowman Express takes out T Bar, Mace and Slapjack on the floor. Sheamus tags himself in, only to get tagged by Strowman. Sheamus interrupts the running power slam to confront Brawn. Sheamus is knocked out of the ring. Riddle tags himself in. Strowman argues with him, shoving Riddle into the corner. Ali takes advantage by rolling up Riddle and getting the pin.

Nikki Cross is backstage looking for Alexa Bliss. She tells Sarah Schreiber that she won’t give up on her friend. She needs to get her away from the Fiend. Schreiber runs into Jeff Hardy ripping down flyers posted by Elias.

The Miz doesn’t want to have this match. He wants a peaceful solution. He wants to work with Wyatt to get at Randy Orton and Drew McIntyre.

Alexa Bliss walks out on stage with a message. He says no. Nikki finally confronts her friend; begging her to leave. Alexa tells her she is right, but then lays her out. WWE officials run out to separate the two. Alexa calms down when Bray makes his entrance. The two walk to the ring arm in arm.

Bray extends his hand to start the match. Miz just attacks and Bray laughs him off. Bray is knocked into the ropes and Morrison hits him with a cheap shot. Wyatt drops Miz out of the ring and slams him into the ring steps. Wyatt runs into a big boot. Miz connects with a double axe handle from the top and hits a DDT. Wyatt kicks out at one. Miz connects with the IT kicks. Wyatt catches Miz with a clothesline and crushes him in the corner. Wyatt hits a standing uranage. Morrison grabs Bray’s leg. Alexa Bliss launches herself into Morrison and the two spill over the security barrier. Miz with a corner clothesline, but Wyatt shrugs it off. He hits Sister Abigail and covers to get the pin.

As Bray and Alexa walk up the ramp, the Fiend appears on the TitanTron and the lights go dark.

Adam Pearce informs Charly Caruso that Dana Brooke and Mandy Rose are out for Survivor Series. Lacey Evans and Peyton Royce will replace them. Charly asks Asuka about her match with Sasha Banks on Sunday. Asuka does her thing, saying she will win.

Orton tells Caruso that he has a long list of distractions heading into his title defense.

Angel Garza talks about the roses that grew in the garden when he was a child. He thinks of himself as the thorns that protect the beauty of the roses.

Nia asks Shayna why she didn’t hold back on Mandy, because they really could have used her. Lacey Evans and Peyton Royce try to talk with their new teammates, but decide to back off. Nia isn’t please with the new recruits.

Drew comes to the ring in his old gear, proudly wearing the kilt.

McIntyre drops Orton with a shoulder block. The two then size each other up. Drew head butts Orton and stomps on his hand. The two trade shots and Orton get caught with a spine buster. Orton kicks out of the pin and rolls out of the ring. He grabs his title and walks up the ramp. McIntyre chases him down and rolls the champ back in the ring. Drew loads up the Claymore, but Orton ducks it. McIntyre crashes to the mat, as Orton grabs his title. Adam Pearce walks out, telling Orton there will be no count outs or disqualifications tonight. We go to break.

Drew fight back with shots to head and slams Orton onto the table. He slams the champ a second time. Drew looks for the Claymore kick, but misses again. This time crashing into the announce table. Orton sets up a table at ringside. McIntyre is able to bounce Orton off the ring steps.  Orton makes a pin in the ring, but McIntyre kicks out.

Drew with chops and an overhead suplex. He follows with a leaping neck breaker. Orton counters the Future Shock DDT and then catches Drew on the top turnbuckle and delivers a superplex. Orton covers, but only get a two count. McIntyre counters an RKO with a backslide. Orton kicks out, but Drew hits the Future Shock DDT. Orton kicks out at two. Drew knocks Orton of the apron and through the table. He rolls the champ into the ring, but still can’t get the pin. Drew wants the Claymore. Drew doesn’t get the Claymore; he runs right into a power  slam.

The fights goes to the floor, with Orton hitting a draping DDT off the announce desk. Orton pulls McIntyre up to the apron to deliver another DDT. The champ looks for the RKO, but McIntyre blocks it. He sends Orton off the ropes and finally connects with the Claymore kick. McIntyre covers and gets the three count to win the WWE Championship.

Drew walks up the ramp with title in hand as the show cuts out. See you next week in the ThunderDome.

Heading into Survivor Series WWE put on another solid Monday Night RAW. With the WWE title on the line, Bray Wyatt was able to erase any question of “Will the Miz cash in?” by taking him out earlier in the night. I now need a GIF of Alexa Bliss wiping out John Morrison over the security barrier. The title match itself would have found a home on any pay per view.