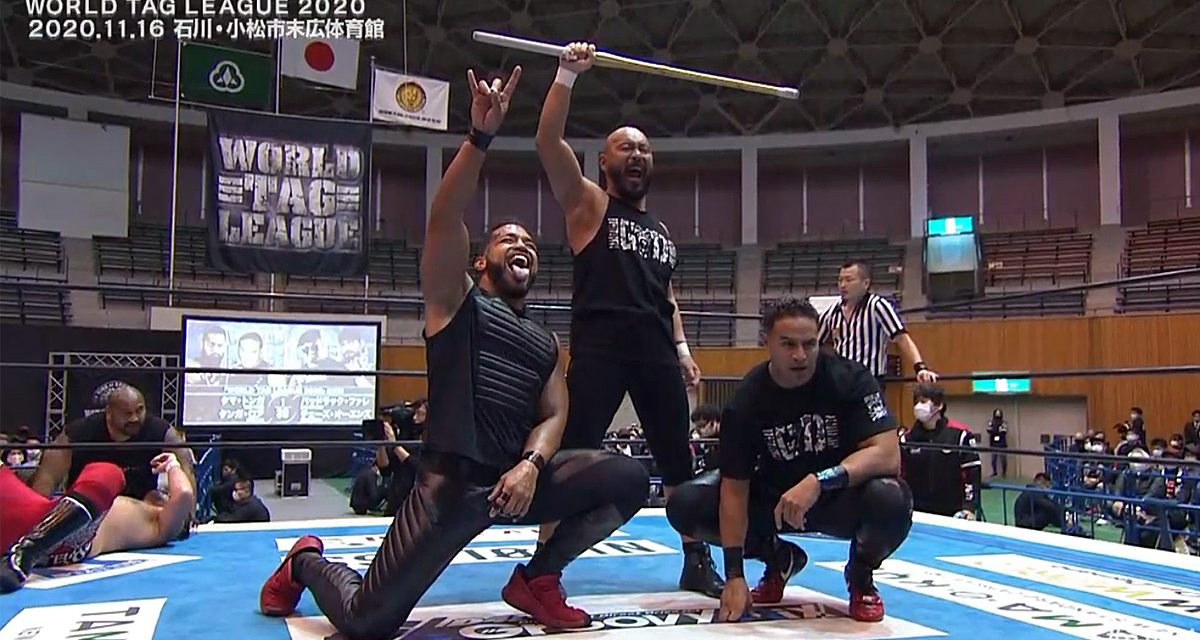 In an awkward encounter, it was the Guerrillas of Destiny (Tanga Loa and Tama Tonga) versus their teammates Chase Owens and Bad Luck Fale. The match itself may or may not have been a revelation for Owens and Fale as far as who Gedo is really loyal to.

A group “too sweet” was followed by a separate one with just the Guerrillas and Gedo. Owens and Fale were confused by it all.

While Owens was talking things over Fale, Tonga drop kicked him from behind. Owens rolled out of the ring. Tonga held the ropes open for Owens to return to the ring only to batter him from behind.

Owens fled to the outside once again. This time Gedo took a swipe at him with his kendo stick.

“We are on the same team!” yelled Owens. Gedo didn’t seem to care.

Owens and Tonga rolled around the mat laying in shots on one another. Owens caught Tonga with a flying drop kick and a punch to the throat.

“He started it!” Owens complained to the official when he was admonished for the throat shot.

Loa threw Owens into the ringside barrier and blamed it on a cameraman, of all people. 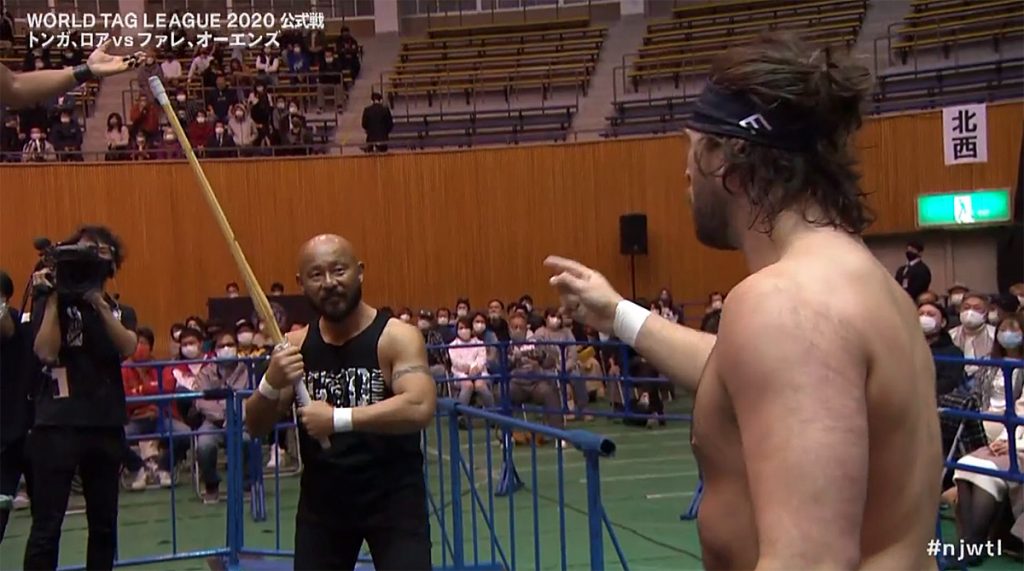 As Loa gave Owens shoulder tackles in GOD’s corner, Tonga hooked him with forearm smashes to the jaw.

“Keep coming, Chase! Keep coming!” laughed Loa while Owens hit him with chops to the chest.

Owens finally hot tagged in Fale after slamming Loa’s head in a turnbuckle.

Loa pummelled Fale. Fale just chuckled. An Irish Whip, a Stinger Splash and some haymakers took the fight out of Loa.

Gedo leapt up on the apron. Fale grabbed him by the throat. Loa came to his rescue. Loa and Tonga double-teamed Fale. Fale got the better of them with a double clothesline sending them both crashing to the canvass.

Owens put his feet on the ropes while pinning Tonga but Gedo pushed shoved them off.

“What are you doing?” asked a baffled Owens.

Tonga attempted a Gun Stun from behind. Owens blocked it by holding onto the ropes. Tonga backdropped out of a Package Piledriver and made Owens tap out to the Scorpion Deathlock.
Fale and Owens left the ring without acknowledging the Guerrillas or Gedo. They just walked away angry.

Kidd tries to fight it off desperately crawling to the ropes but eventually he has to submit to Tsuji’s Boston Crab.

Yoshi just cannot out power either opponent and makes a fatal error trying to do so. The Chaos boys ride out the punishment pinning Khan with a super kick by Yoshi and a roll-up pin by Goto.

Evil throws Finlay so hard into the ringside barrier; it crashes back knocking over the time keeper and his table. Evil pins Finlay with Everything is Evil.

Sanada catches Yano off the ropes with a roll-up.

Henare is pinned by Zack Mephisto.