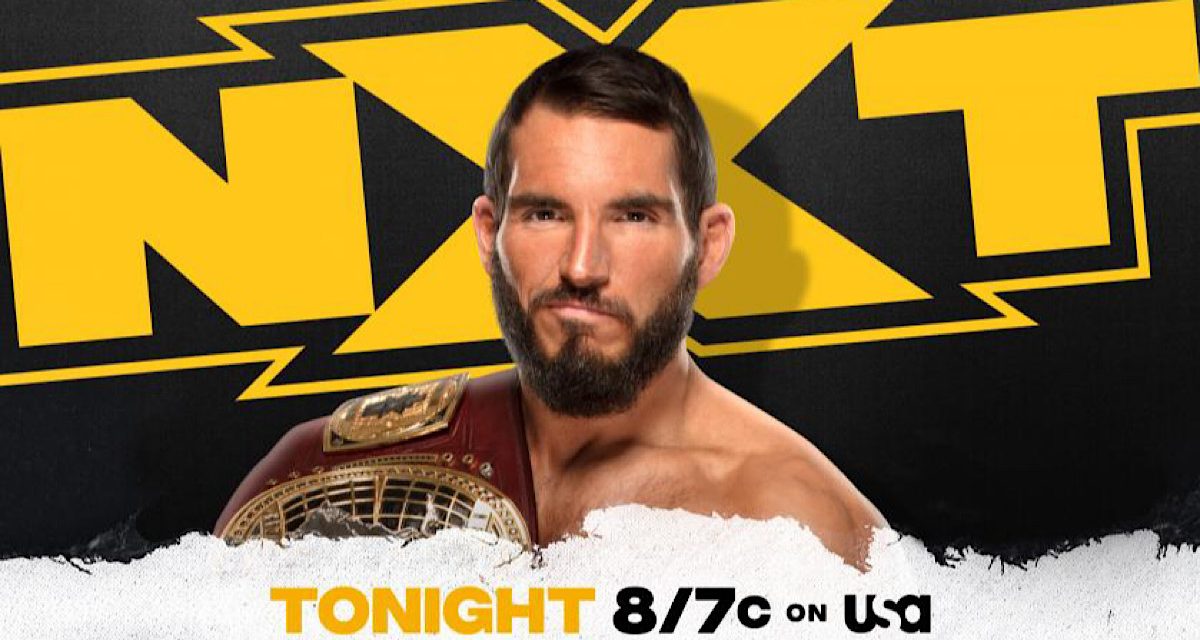 Tonight’s episode opened with a touching tribute package for Veteran’s Day, along with a USA-chanting crowd holding American flags inside the Capitol Wrestling Center. And speaking of America, North American Champion Johnny Gargano took over the initial segment with his very own ‘Wheel of Challengers’ to determine an immediate opponent for the title. The outcome to this match may change the perception of the North American Championship forever. Following that shocker, the yellow brand produced yet another average show with scarce highlights in Pat McAfee and his new stable, filling the void of many missing stars on NXT. Perhaps the new North American Champion can benefit from the title making the man!

North American Champion Johnny Gargano presents and spins his totally-not rigged ‘Wheel of Challengers’, landing on upstart Leon Ruff. The champion is unreasonably elated since Ruff is relatively his same size. But Gargano starts the match and instantly pummels his opponent before eyeing Damian Priest outside, allowing Ruff to capitalize with a rollup for two. The champion gets cocky before attempting his finisher, and Ruff hits another unforeseen rollup for the victory! Leon Ruff is the new North American Champion! Priest tries strapping the belt onto Ruff who’s so skinny that the belt falls down. But nevertheless, 24-year-old Leon Ruff from Detroit, Michigan is the North American Champion!

The competitors trade blows before Escobar gains considerable control. Atlas eventually makes a comeback, taking out Wilde and Raul Mendoza preceding the commercial. With the ringside lackeys officially thrown out, the champion pushes the pressure with a top-rope Hurricanrana and Frog Splash for two. Atlas makes a second and then third comeback prolonging this match even longer until Escobar hits his finisher for the victory. Hopefully the outcome closes this nonsensical mini-feud filled with unattended parking lot attacks.

Dexter Lumis is backstage drawing a caricature of himself and the zombie referee from Halloween Havoc while Raquel Gonzalez prepares for her upcoming bout.

A video package shows Candice LeRae’s destruction of Shotzi Blackheart’s toy tank from last week. Except now some background is giving to the tank which represents Blackheart’s military family.

Raquel Gonzalez enters the ring awaiting Xia Li, her scheduled opponent. Instead, manager Boa comes out apologizing for Li’s absence, not taken well by Gonzalez who attacks the messenger. She looks like a monster here — definitely a future star for this division. The downed Boa is then surrounded by red lights and dragon images around the building as a suited, unnamed Asian man walks out and hands Boa an envelope, marking his hand with a symbol. No clue where NXT is headed with this mystical angle, but it’s leastways intriguing?

August Grey is interviewed backstage before Timothy Thatcher attacks from behind. He slams Grey into Dexter Lumis’s artwork and smashes the canvas. The foreseeable future doesn’t look too bright for Thatcher unfortunately.

The two women chain wrestle for the entire first half with LeRae taking control, avoiding an outside hip attack into the steel steps before commercial. Storm comes back with another hip attack, closeline and suplex for two. Eventually, LeRae sends her opponent into the turnbuckle and pins her with illegal bottom rope leverage for the victory. Storm attacks after the match, and the masked Scream figure and Shotzi Blackheart enter the fray. Surprise, surprise, the mask is removed and revealed to be Indi Hartwell. Was NXT expecting a bigger reaction?

Lumis immediately attacks with a Thesz Press forcing his opponent to retreat. Thatcher delivers a nice belly-to-belly that Lumis no-sells by ‘slithering’ back up, but the former regains control with some mat wrestling. Lumis comes back with a Spinebuster and dropickick, apparently hurting his right arm delivering the first maneuver, letting Thatcher capitalize before break. After being worked down for some time, Lumis makes a comeback hitting a top-rope Swanton before rival Cameron Grimes interferes. This allows Thatcher to tie his opponent up for the pinfall victory as Grimes continues with a post-match beatdown. Grimes places a burlap sack over Lumis’s head and stomps him into a chair.

Johnny Gargano speaks to General Manager William Regal about his big loss earlier. He admits that he rigged the wheel, and Regal confirms that Leon Ruff is the new North American Champion.

Tommaso Ciampa cuts a backstage promo on the entire NXT roster, saying that he’s the last of a dying breed. He vows to change the locker room and its attitude.

A ‘Prime Target’ video package hypes Io Shirai vs Rhea Ripley for the NXT Women’s Championship next week. These packages are always great, it’s a given.

Pat McAfee and ‘The Kings of NXT’ enter the ring. McAfee the leader once again mocks Orlando and wrestling fans, nothing new. He joins the commentary booth for tonight’s main event.

Cameron Grimes is backstage saying that he’s going to the moon — also nothing new.

All four competitors brawl around the ring with Breezango gaining control. Tyler Breeze throws Lorcan into McAfee at commentary before break. Burch and Lorcan shortly turn the tides, but Fandango makes a fiery hot, taking out Pete Dunne ringside with a dive. As Fandango attempts a Powerbomb, McAfee provides a distraction inadvertently allowing rival Drake Maverick to interfere. Fandango delivers his finishing top-rope leg drop, but Lorcan surprisingly kicks out as Dunne clobbers Maverick ringside. The heel faction causes more chaos before Burch and Lorcan hit their tag finisher for the victory. After the match, Maverick dives into the lion’s den and tries to attack, yet the numbers are too strong. The faction sets Breeze across the announce desk setting up McAfee for the punt kick. Strong ending with the help of McAfee and his mates.

Him winning the North American Championship is admittedly ridiculous, but I cannot root against my hometown hero Leon Ruff. As for the rest, these cartoony, goofy angles that are becoming increasingly prevalent on this show are ludicrous and out of place for WWE’s supposed underground brand. Once again, Pat McAfee was a huge saving grace.