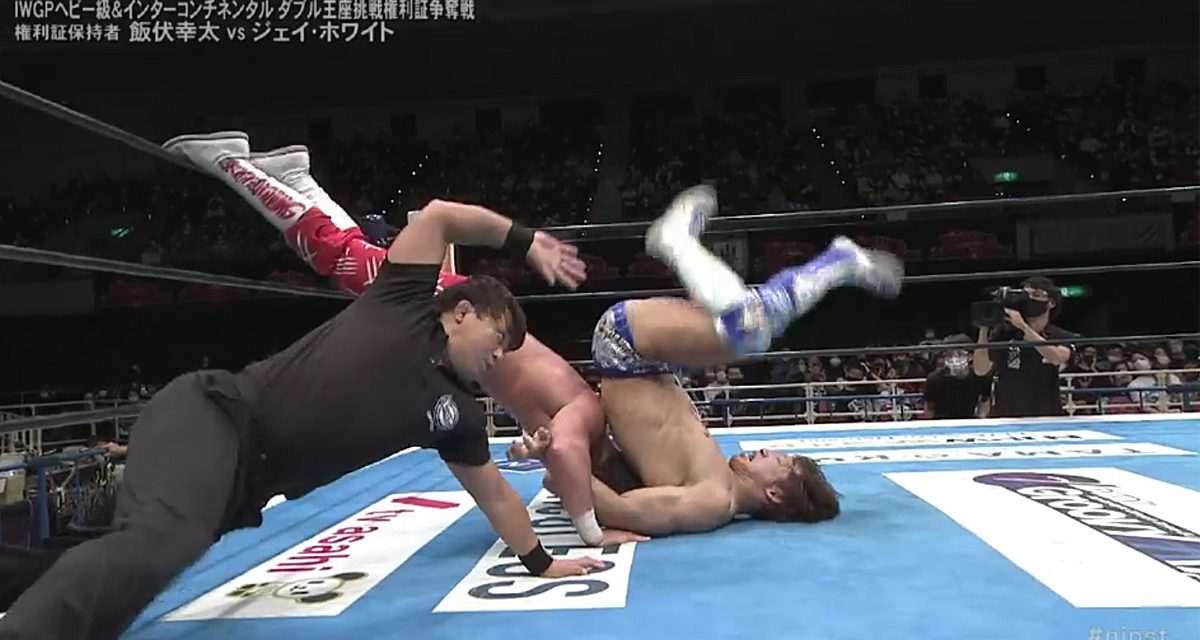 White beat Ibushi in an intense match by draping his feet over the ropes to steal the pinfall and the Wrestle Kingdom certificate that Ibushi. Ibushi won the certificate at the G1 Climax tournament. Naturally, the official was blind to White’s shenanigans which begs the question of whether there will be a rematch or not in the near future with the certificate on the line once again?

White and his manager Gedo were all smiles as Ibushi, close to tears, stumbled back to the dressing room in a complete daze.

White didn’t waste any time getting into Naito’s face. He did so at the end of the main event.

In what was hopefully their last match for some time, Tetsuya Naito defeated Evil to hang onto the IWGP Heavyweight Championship and the IWGP Intercontinental Championship.

White went into the ring and held up Naito’s arm as the winner before holding up the Wrestle Kingdom briefcase. 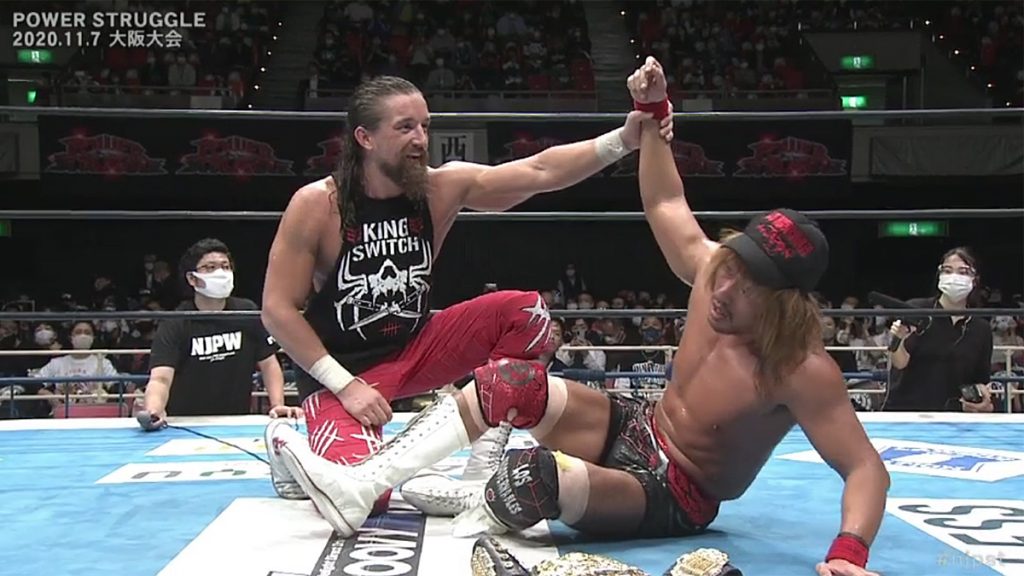 As White continued to flap his gums out came an angry Kota Ibushi.

“You don’t have this anymore! You don’t get to come out here!” White yelled at him as he advanced on the ring.

“You have nothing! Why are you out here?” asked White from the safety of the arena floor.

Ibushi chased White to the back not saying a single word.

Naito remained in the ring watching all of the drama unfold and just shaking his head.

The road to Wrestle Kingdom became clearer when Kazuchika Okada was issued a challenge by Empire leader Will Ospreay at the end of his match with Great-O-Khan.

“You passed my test and for that you get the truth. I used you to become more popular so everyone here knows the name Will Ospreay,” laughed Ospreay.

Ospreay told Okada that since he left him and Chaos he has flourished. 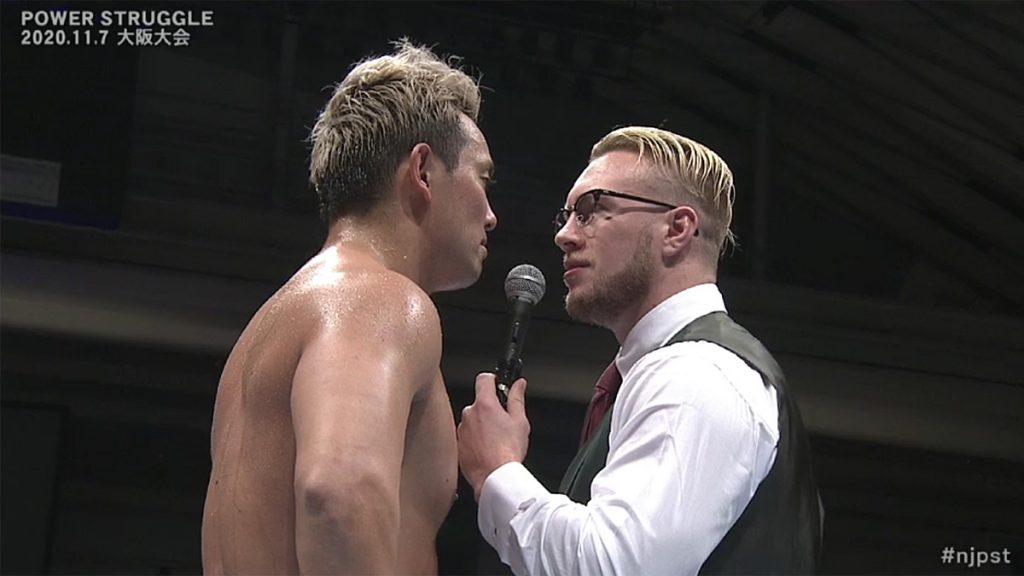 “What if I ended your career?” asked Ospreay as he tore off his expensive jacket and whipped his watch into the crowd saying he could get acquire more trinkets if he put Okada out for good and was declared the best wrestler in the world for doing so.

“You know what would make me really happy? Being the man who ended The Rainmaker and what better place to finish you but the Tokyo Dome,” said Ospreay challenging The Rainmaker to a match at Wrestle Kingdom.

“You did a lot of talking and all of it in English. The only thing I understood is Tokyo Dome, Wrestle Kingdom and Okada versus Ospreay. That is enough for me,” responded Okada.

“It is not going to be a battle of big brother and little brother any more. I will crush you in front of the world,” Okada said accepting Ospreay’s challenge. 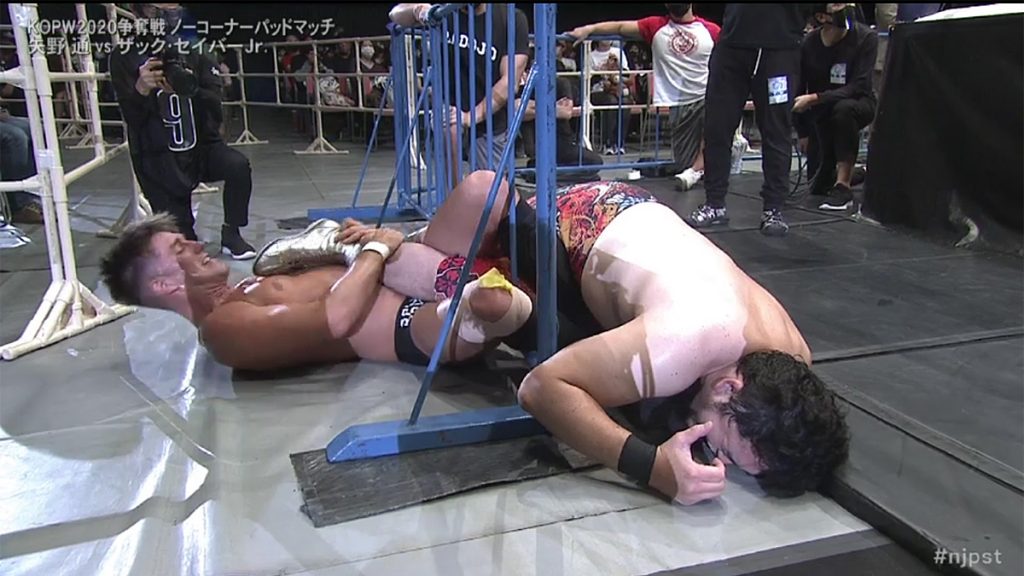 There is no escape for Yano…or is there? Courtesy: NJPW.

Chris Charlton points out that unlike previous KOPW matches the public was not polled on the stipulation. Charlton jokes that’s a good thing because officials might have been counting votes well into next year.

Before the match begins the Young Lions removed the corner pads.

Yano is the first to taste the exposed buckles as he is whipped in four times. Yano takes a pad from under the ring and tries to reattach it. Zach blasts Yano from behind, picks up the corner pad but decides not to use it against Yano throwing it over the ropes and to the floor. Yano sprays sanitizer in the face of the Most Electrifying Wrestler in the World. He barely beats the count back into the ring. “I cannot see!” Sabre Jr. shouts. Yano tapes a corner pad back up. Sabre Jr. wraps Yano’s leg around the safety barricade again and again then puts a figure four on Yano. Yano ties Sabre Jr.’s boots to the security railing so he gets counted out. 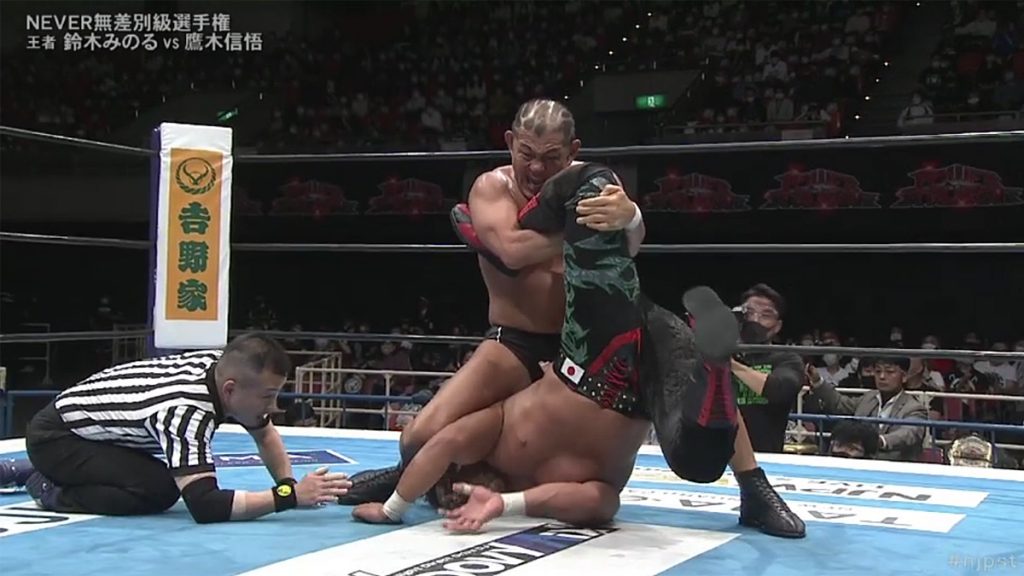 Shingo’s back is taped due to the attack by Suzuki. Suzuki and Shingo take turns punching, forearming and head butting each other in a corner. And that is just the start of the two bulls just ruining each other in this strong style bout.

Suzuki and Shingo no sell devastating blows until they both collapse to the mat. Shingo escapes every punishing knee submission Suzuki can apply. Shingo wiggles out of the Gotch Style Piledriver but his back gives out. He cannot capitalize.

Two Pumping Bomber clotheslines knock Suzuki out. Shingo pins Suzuki with Last of the Dragon. Both men stagger to the back.

Will Ospreay comes to the ring dressed in a suit and carrying a bottle of champagne. Khan attacks Okada before he can even get his robe off. Ospreay sits at ringside sipping champagne as Khan takes care of business.

Khan gives Okada a series of Mongolian Chops. Ospreay: Give him more! Give him more! Khan halts the Money Clip with his claw hold spiking Okada with a reverse suplex.

Okada counters The Eliminator with another Money Clip. Okada squeezes down on Khan with all the strength he can muster. The official calls the match when Khan loses consciousness. 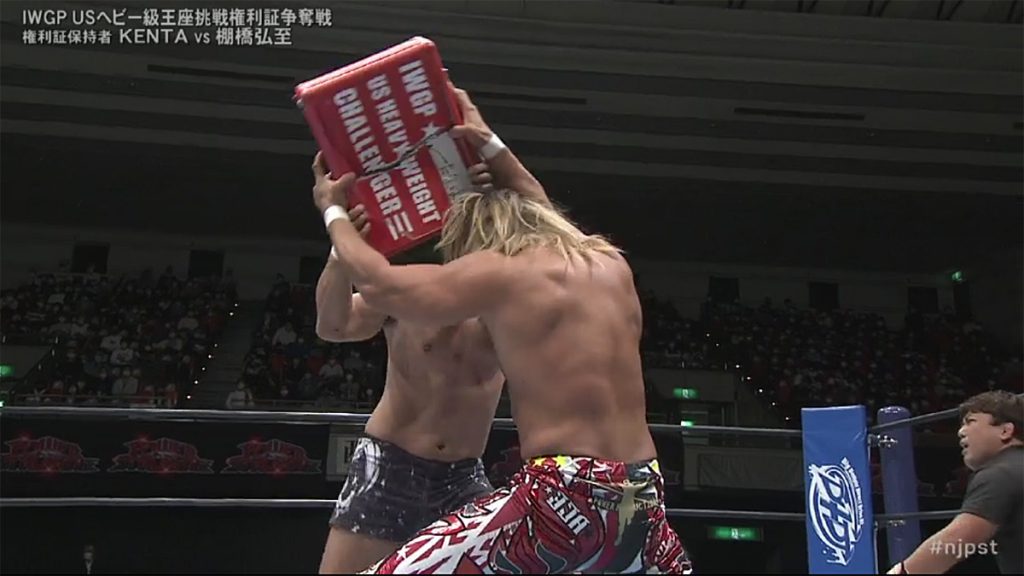 Kenta and Tanahashi fight over the briefcase. Courtesy: NJPW.

A good contest but no real heat during this match and there should have been.

Tanahashi kicks out sending Kenta flying into the official knocking him onto the floor. Kenta retrieves the briefcase. Kenta and Tanahashi battle over the case. Kenta ends up getting bonked in the head with it by the official.

Kenta retains the certificate by making Tanahashi submit to Game Over.

White stalls and stalls. He picks up the briefcase infuriating Ibushi. The official demands he put it back on the announce desk. White throws the briefcase at Ibushi. He catches it and gets punched in the face.

Gedo grabs Ibushi’s leg from outside the ring. White drop kicks Ibushi’s knee and slamming the back of his head on the ring apron. Ibushi battles back gaining the advantage with his striking ability. Ibushi kicks Gedo off the ring apron. White steals a win by using the ropes as leverage. White wins the Wrestle Kingdom Certificate. Rocky Romero says: This year cannot get any worse.

The table for Wrestle Kingdom has been set with a night of phenomenal matches and curious angles.