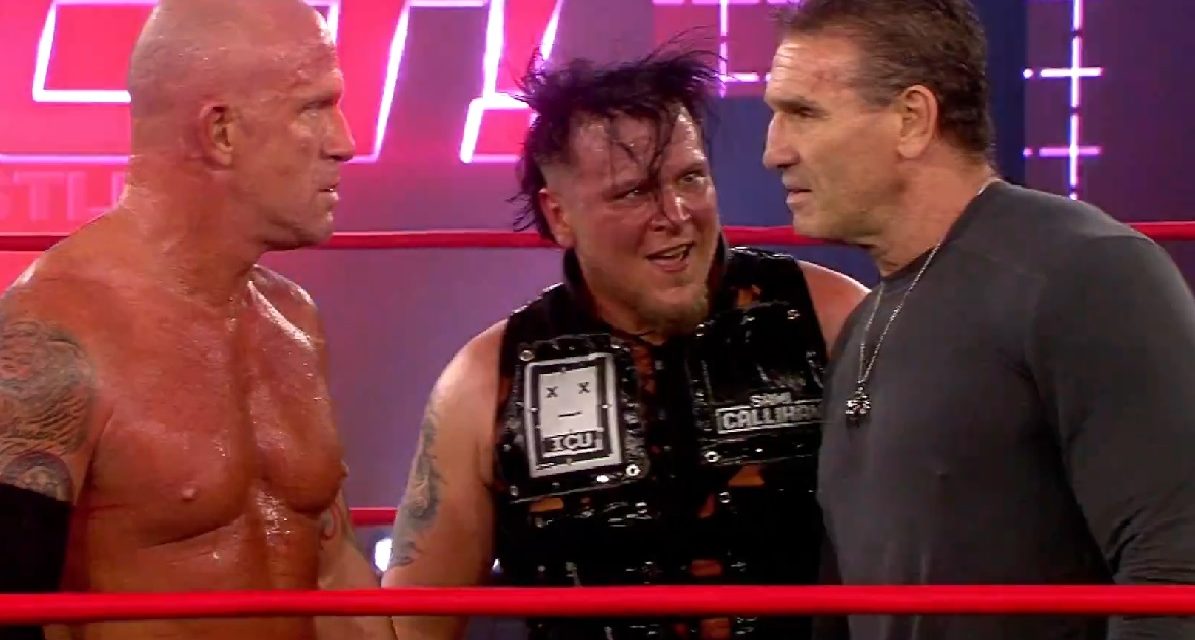 When Aristotle said that the whole is greater than the sum of its parts, he couldn’t have imagined that would one day apply to the level of insanity that would arise when Sami Callihan, Ken Shamrock, and Eric Young joined forces. But if the ending of this episode is any indication, it looks like this scenario has come true – and that could be disaster for the new Impact World Champion Rich Swann. Time will tell. As it will before we learn who shot John E. Bravo last week.

The show started off with an opening video going through John E. Bravo’s erratic behaviour over the past few months that earned him a bunch of enemies. Basically, there are several people who he ticked off, and therefore could reasonably be considered suspects in his shooting.

Scott D’Amore was on the phone and he got word from the hospital that Bravo had been placed in a medically-induced coma. Tommy Dreamer came in dressed up as a detective, and said that he was on the case, to D’Amore’s chagrin.

Purrazzo jumped Yung immediately after the bell, but Yung was able to withstand the attack and go on the offense, threatening Purrazzo with the Mandible Claw. Desperate to avoid that, Purrazzo attacked Yung’s arm to try to weaken it and set up the Venus De Milo. They exchanged strong hits on the criss-cross, and then both went down after clotheslining each other. After a series of reversals, Yung was able to lock on the Mandible Claw. Lee slid in a chair for Purrazzo, but Yung intercepted it. She and Purrazzo played tug-of-war, and Purrazzo took the chair to the gut, prompting the referee to disqualify Yung. Lee tried to attack Yung after the match, but Yung bashed her with the chair, before kicking the chair into Purrazzo’s face.

This was over far too quickly, as it barely got started before the disqualification. Disappointing, since these two could have had a good match, like they did at the PPV last weekend.

Heath and Rhino were in the boardroom waiting for Scott D’Amore to arrive to sign Heath’s contract. Heath was noticeably in pain, which they tried to hide when D’Amore arrived. Heath tried to sidestep the idea of getting into the ring next week, and when he did, D’Amore questioned his condition, remembering that Heath didn’t look so good coming out of the Battle Royal at the PPV. D’Amore told Heath that he can sign the contract when he’s 100% healthy. Heath and Rhino left, disappointed by this turn of events.

As they left, Deonna Purrazzo’s barrister, Mr. Evans, entered the room. He said that Purrazzo should get another title match, since the last one ended with her winning the match but not the title. D’Amore had enough of this guy’s attitude, so condescendingly said that Purrazzo would get her shot at Turning Point (the Impact-Plus special on November 14) and to alleviate Evans’ concerns, it would be a no-DQ match. He mentioned all the evil things that Yung would be able to do to Purrazzo, and Evans left, knowing that he had been outsmarted.

In the dressing room, new Impact Champion Rich Swann and Eddie Edwards were talking about their tag team match against Eric Young and Sami Callihan tonight. They seemed to be on the same page.

A nice opening sequence saw the two go even-steven in their ground and grappling game. Bey escalated things to the next level with a big slap and a kick, and business picked up from there, with both of them hitting some speedy moves, but still keeping it clean. A flying splash by Bey got him a two-count and stunned Trey, who came out of that with a welt on his head. But he was able to land a few well-placed kicks onto Bey and momentum shifted his way. Until it didn’t, and Bey was able to block a kick and then hit Trey with a huge Bey Blade to get the pin.

This was a solid X-Division style match. These two really make the lack of crowd noise noticeable, because everything they did would have gotten big reactions.

Madison Rayne and Johnny Swinger introduced their guests, Jordynne Grace and Tenille Dashwood (w/ Kaleb). Madison pointed out that neither of them had found a partner to team up with for the Knockouts Tag Team Championship tournament, and suggested they join forces. Grace asked Tenille if she wanted to form a team, and Tenille did… but with Madison. Madison agreed, and as the four of them celebrated, Grace left angrily.

This was fine. It makes you wonder if they will be setting up Grace to enter the tournament solo, or if they may pull out a surprise partner for her in the coming weeks.

Dreamer was interrogating senior official Brandon Tolle, who had a beef with Bravo stemming from an incident where Bravo had Tolle’s decision reversed and then insulted him. Tolle said he was too busy for this and Dreamer dismissed him. Swinger and Cody Deaner both came in to be interviewed, but they realized that they were facing each other next, so Dreamer told them to come back after that.

X-Division Champion Rohit Raju was in the ring and, after giving himself a Heyman-esque introduction, challenged anyone to come down for a match. TJP came down to the ring and questioned Raju’s genuineness, noting that he says he’s all about giving others an opportunity, but won’t give him one. Raju told him he had the opportunity to get out of the ring. They exchanged fiery promos, and then TJP threw a cup of hot tea on Raju’s chest, leading to a brawl. The promo work here was really good, though the tea spot was kind of strange.

Gia Miller asked Chris Sabin for an update on Alex Shelleys’ condition after he was attacked by XXXL last week. Sabin said Shelley would be fine, and challenged either member of XXXL to take him on tonight.

Backstage, Raju and TJP were arguing with Scott D’Amore between them. D’Amore said TJP would a title shot with the stipulation that if Raju beat him cleanly, TJP would not get any more title matches while Raju was champion.

Gallows out-muscled Page early on, which frustrated Page. A distraction by Alexander on the outside turned Gallows around and Page took advantage, chopping down the big man and then grounding him with a huge dropkick. After taking a beating for several minutes, Gallows came back with a vengeance, staggering Page with a huge clothesline. Alexander and Anderson went at it on the floor while Gallows ended things with a huge Superkick. After the match, Alexander hit the ring and attacked Gallows, but the Good Brothers ended up clearing the champs out of the ring. This was pretty good. Page is very good as the unlikeable loudmouth heel.

Gia Miller interviewed Swoggle who was shilling his autobiography. He said that he no longer wanted to be considered as a joke, and that being in Impact will give him the opportunity to be seen as a wrestler. This brought out Brian Myers and they exchanged insults. Myers shoved Swoggle to the ground and left.

Deaner repeatedly one-upped Swinger in the opening minute, but some old-school heel tactics by Swinger turned things around. He went for the ten punches in the corner, but Deaner escaped and dropped Swinger hard. Deaner went for the Deaner-D-T, but Swinger eye-raked his way out of danger. Swinger then went out and got a chair, and was going to hit Deaner, but Cousin Jake pulled the chair away. As the ref made sure the chair got removed from the match, Swinger nailed Deaner in the face with his loaded fanny pack, and got the weaselly pin. Swinger is comedy gold, so this was fine, even though it was really short.

They did a full entrance for Moose who displayed his more serious attitude, coming out in a suit and wearing a scowl. Moose said that he and the TNA World Heavyweight Championship had not been taken seriously over the past few months. He said by taking out EC3 and taking control of his own narrative, Moose had been reborn. He listed off his successes over the past few years, noting he’d beaten Rob Van Dam, Ken Shamrock, Rhino, and Tommy Dreamer, as well as EC3. He said that people should be talking about his accomplishments, but rather only talked about the Impact World Championship and champion Rich Swann. He showed the footage from last week when he attacked Willie Mack, and told Swann to ask Willie what pain really feels like. Willie ran down to the ring and attacked Moose, but when the fight spilled to the floor, Moose shoved Mack into the cameraman and when Mack turned to check on him, Moose pounced. He laid Willie out and choked him out with a cable. The change to a more serious nature for Moose is a good thing, though if this is to be effective, he needs to simply destroy Willie Mack and not get bogged down in midcard feuds.

Chris Bey went into Rich Swann’s dressing rom and congratulated Swann on winning the title at BFG. Bey tried to petition Swann for a title shot, but Swann said that Bey would have to earn the opportunity. As Bey tried to plead his case, Eddie Edwards came in to get Swann for their match.

Tommy Dreamer assembled James Mitchell, Hernandez, Fallah Bahh, Cody Deaner, Larry D, Havok, Johnny Swinger, Taya Valkyrie, referee Brandon Tolle, and Rosemary in a room and said that he had narrowed the suspects in the Bravo shooting to one of them. He said that the investigation will continue. No surprise there. Hopefully they don’t eliminate one suspect a week and take this all the way to the January PPV. This is fine, but if it drags on that long, it risks getting tedious.

The pace started off quickly, with Swann and Edwards hitting successive diving attacks to the floor after only a couple of minutes. They were still in control after a commercial break, putting the boots to Callihan. But Young’s cheating ways tilted things in his team’s direction, and soon he and Sami were swarming Edwards viciously. Eddie gritted it out, and he caught Young in a top rope attack attempt, and dropped Young with a superplex. He tagged in Swann who used his feet to put both opponents down, punctuating it by hitting a hurancarana on Sami off the top rope and right onto Young. The ref lost control at this point, and it resembled a Texas Tornado match from then on. Sami and Young looked to hit stereo piledrivers, but they were reversed, and Swann and Eddie clamped on single leg crabs. Young prevented Sami from tapping out and used his leg strength to shove Edwards hard into Swann who got knocked out of the ring. Edwards slingshotted Young to the floor, and then he and Sami exchanged high-impact moves. Eddie locked Sami in another crab, and when Rich went to break it up, Ken Shamrock ran to the ring and decked Swann. Shamrock’s attack caught Eddie’s attention, and with him distracted, he was easy pickings for a Cactus Driver by Sami. After the match, Callihan, Shamrock, and Young celebrated the win and acknowledged their collective evilness. This was a good match, and the alliance between Young and Callihan/Shamrock has some interesting possibilities.

The matches were all pretty solid, with the exception of the women’s match – though, that was done to set up a rematch with upped stakes, so it’s at least understandable. The mystery storyline is fun in these early days, so hopefully it doesn’t wear out its welcome. They seem to be rehabilitating Moose and that’s looking up. And TJP was a revelation on the mic. A good couple of hours.