Film review: Al Snow is the engine of ghost story ‘The Whittler’ 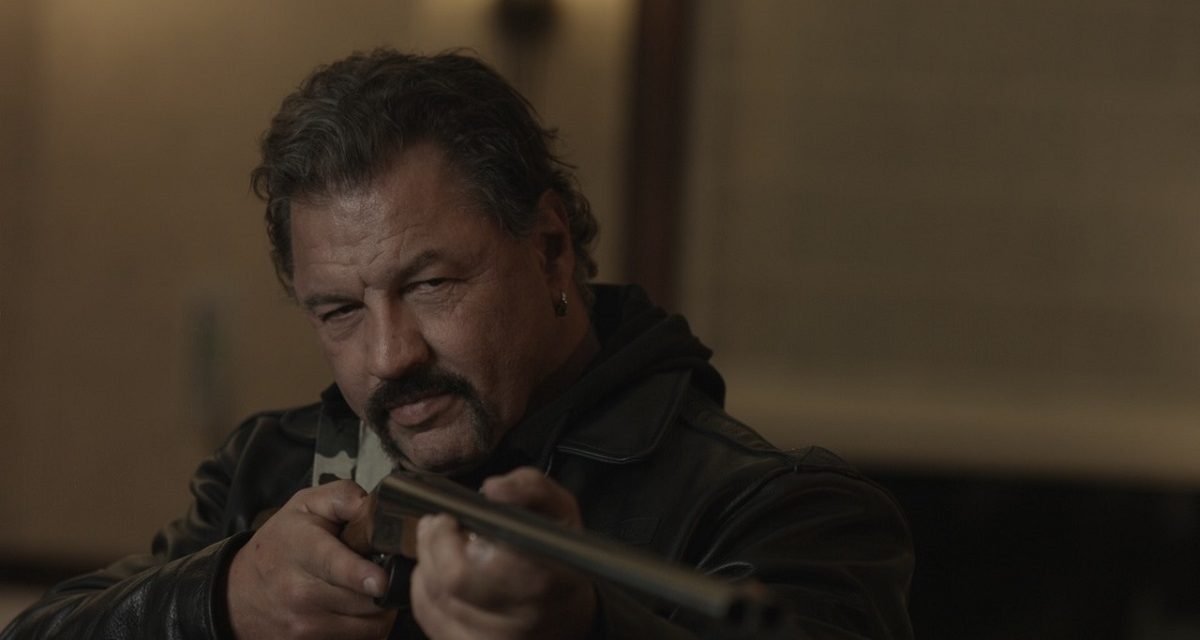 First things first, just for a little perspective on this review — I am not a fan of horror movies, or scary movies of most any kind. I never liked them as a kid and never grew into them. So, during the viewing of The Whittler, a ghost story starring Al Snow that became available on Amazon Video and Vimeo (at this time, in the United States only) in mid-October, I was both following the plot and also trying to figure out what it was that was making the movie so enjoyable for me.

Oftentimes, a movie can win me over with a couple of elements that are really hard to define: heart, and a willingness to try something less than obvious. The Whittler showed me enough of both in its short runtime of one hour and seven minutes to let me enjoy the experience despite being a genre I typically avoid.

To be clear, though, The Whittler really isn’t very scary. It’s a bit moody, a bit dark, and definitely drifts into supernatural territory, but it avoids jump scares and offers moments to ponder rather than peer at through spaces between fingers. In some ways, it reminded me of something that would have fit into the catalogues of The Twilight Zone or Amazing Stories. That’s why I sense that spirit of adventure in telling the less-than-obvious story.

The film makes the most of what is clearly an ultra-low budget. With minimal locations, hardly any special effects, and a methodical pace that favours low-key acting performances, it seems to know its strengths and draw upon them appropriately.

A big strength, and fortunately the core of the film, is found in the acting ensemble. Al Snow is not really the main character, but he receives top billing. He may be the most recognizable name, but he also likely commands this billing due to his performance in the film. He seems to be the character with his wits most in check as things get out of control.

Snow plays Terry, the biggest goon in a small town. He’s not complicated, and sets much of the movie in motion by seeking out money owed to him. He commands attention on the screen easily, with a natural presence that is completely believable as the type of man who gets his way all of the time. 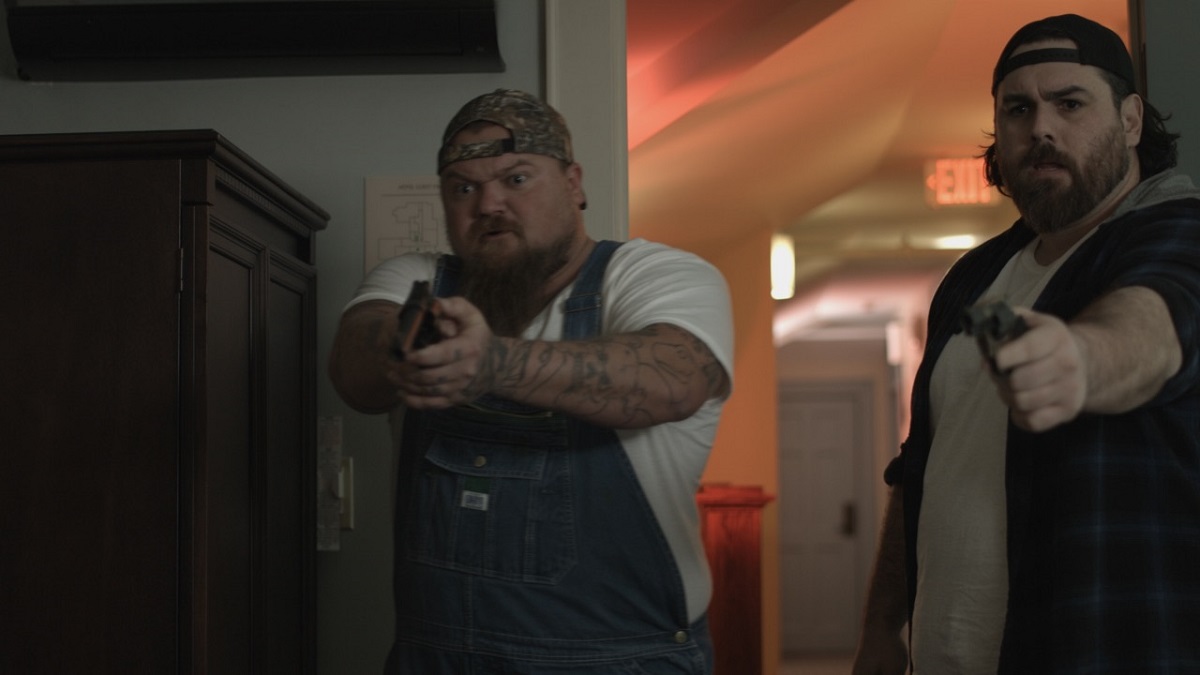 Surrounding Terry is a misfit band of accomplices, played in part by by comedians Andrew Conn, Gerard Haran, and Catfish Cooley. Again, as a horror movie, The Whittler doesn’t go all-in for scary, and as a gang of thugs, these three characters are funnier than they are intimidating, but it works. It especially allows Snow to play Terry as straight as possible, as if he is the only one in the gang who knows what he’s doing and is surrounded by lesser talent simply because he has no other options.

On the other side of the coin are our protagonists, John Wells and Sarah Cleveland, who deliver fine, sympathetic performances in the face of danger from criminals and from the great beyond. In truth, they aren’t given much to do other than react as the story moves around them, but not through them, and towards the end they seem a bit blasé over what should have been shocking and rattling events. The truth is that it’s not really their story. Cleveland, however, delivers the flip-side of Snow’s performance as admirably level-headed when those around her start falling apart.

The final group of characters include a couple of girls, played by Mahalah Donae Peters and Raegan Joseph, and the grizzled titular character of The Whittler who, in the credits, is listed as being played by “Whittler.” As a character, The Whittler is one-note, but the actor delivers a memorable performance with a drawl that alludes to a long history behind him. Surely there’s a story behind his real name, but maybe it’s just a bit of mystery thrown in to the credit list for good measure. 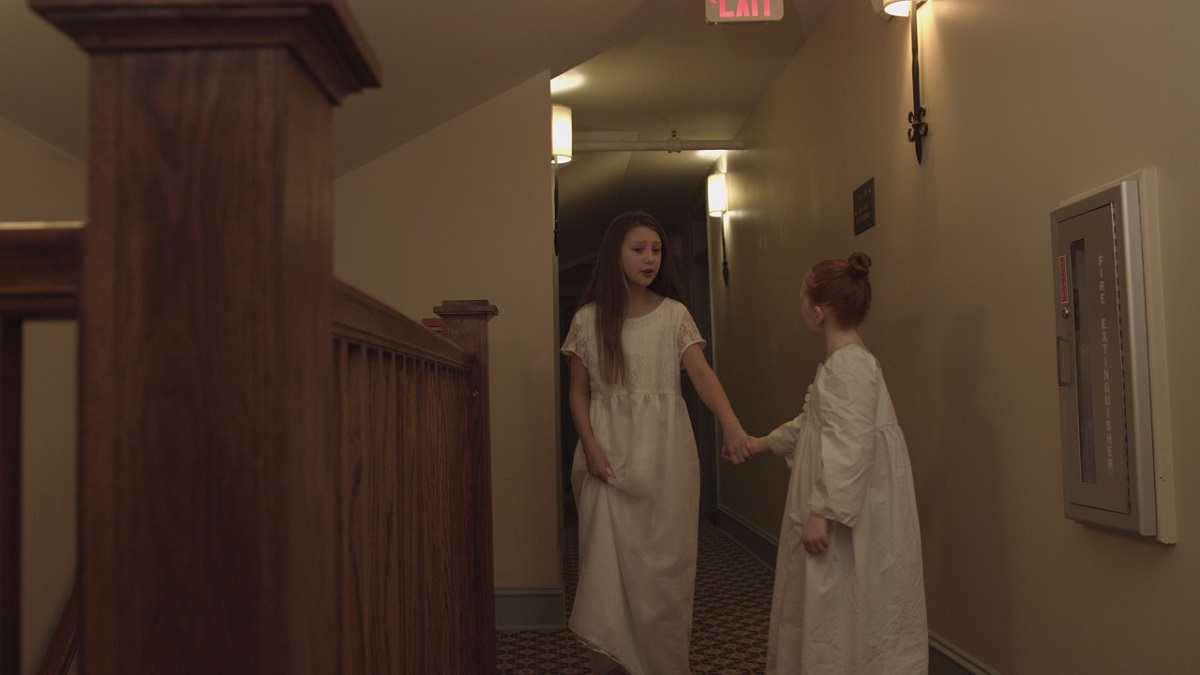 Peters and Joseph look like they fit right into a creepy, haunted inn. Photo: IMDB

As for the girls, well, it’s hard enough for adults to really express characters well, and it’s often far out of reach for young actors. Peters and Joseph do their best, but they’re playing characters that act beyond their years in a very mature situation, so it’s not surprising to find them often struggling to bring such layers to their performance.

Still, amongst these three distinct groups of characters, there’s a real cohesion found by bringing them all together into a tight space and placing jeopardy before them. The plot moves at a standard and predictable pace, from the introduction of characters to the events that bind them, and finally into the traditional lining up for creative death scenes that drive movies in this genre, but The Whittler is an example of that strange magic when a sum equals more than its parts.

If you break the film down bit by bit, from the budget, to the at-times awkward voice-over recording of the performances, to the stretching of believability of characters and their actions, then perhaps it shouldn’t have worked. However, at least for this viewer, it did.

I’m being intentionally vague about the plot, because the set-up is hardly new but where the story leads is less than typical territory. Plus, a big part of the plot is wrapped up in what the characters learn as they go, so that should be experienced in the viewing. Suffice it to say that without the supernatural element, this is a heist-gone-wrong movie where, frankly, it’s easy to enjoy watching what the tagline promises: People getting what’s coming to them.

The “heart” that I mentioned isn’t really about whether the story has a strong moral message or anything quite so obvious as that, because that’s entirely subjective. I look more to the fact that the humour comes from the characters being true to themselves rather than the filmmakers trying to invent funny situations that have people do things that don’t make sense for them to do. Similarly, the tension comes from the characters looking out for themselves and those they care for, and not from taking actions that simply move the story along. That’s not easy to do.

Ultimately, if you’re looking for something to gamble on in the spirit of Hallowe’en weekend, the timing is right to check out The Whittler and see if you, like me, can get past some of the film’s obvious handicaps and enjoy the telling of a campfire ghost story. I can’t promise that it will click for you as it did for me, but I can vouch for it being worth a try.