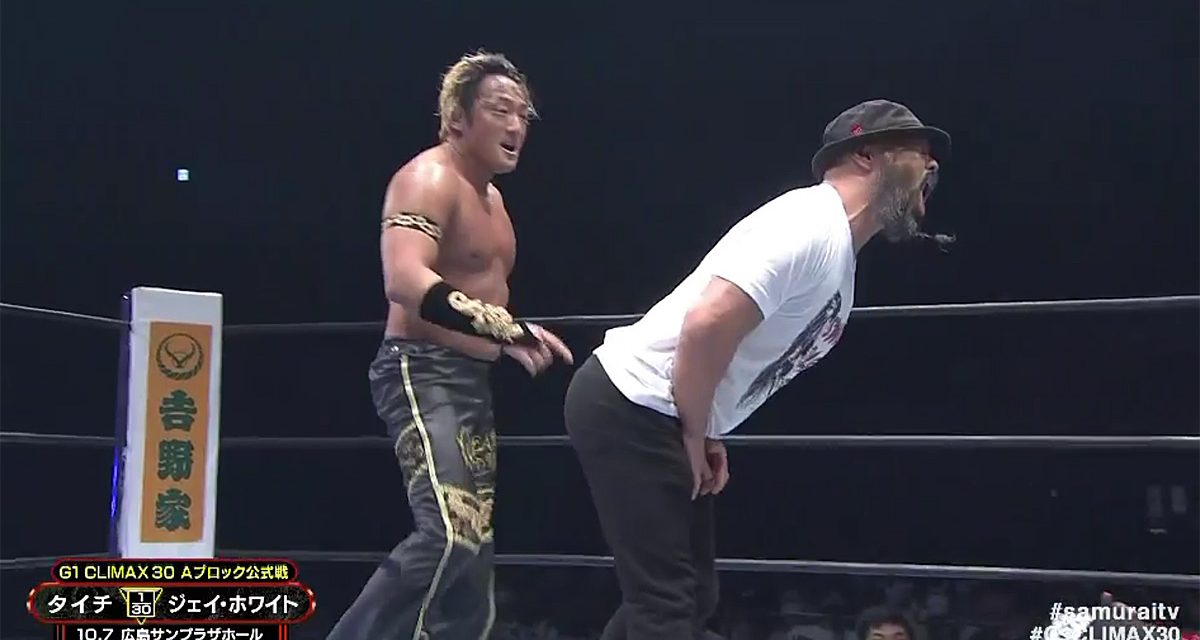 Well, that didn’t last long. After night 11 of the NJPW G1 Climax tournament Kota Ibushi is no longer leading A Block. The top spot is now a four-way tie between Ibushi, Jay White, Kazuchika Okada and Will Ospreay.

Although it wasn’t the main event the match between Jay White and Taichi should have been as White continues to be NJPW’s most entertaining heel.

Jay White brings a chair into the ring. He sits down as Taichi finishes singing and claps at the end. White hands the chair to referee Red Shoes. Jay White complains that Taichi left his microphone stand in his corner. He wants it out of the ring. Taichi says White talks too much. 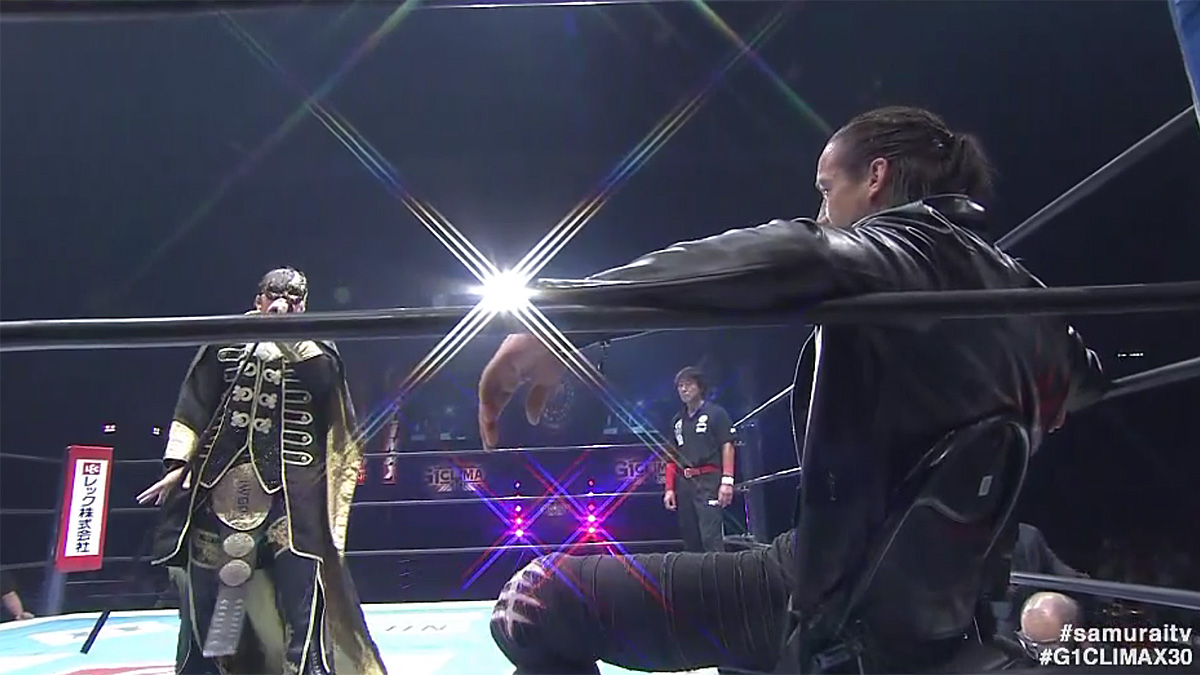 “Get all this s—t out of the ring,” White demands.

Both Taichi and White roll out of the ring at the same time and continue to do so.

Taichi chokes out White with a camera cable. White throws Taichi into the ringside barrier. He picks up his microphone.

“Sing for me, Taichi!” yells White holding the microphone out to a fallen Taichi.

Later, Gedo comes into the ring. Taichi kicks him right between the goal posts. Taichi does the same to White, rolls him up but cannot put him away. A Last Ride doesn’t work either. White wins with Blade Runner.

Kidd has a rough one. Tsuji spears him then slaps on a Boston Crab to notch the victory. 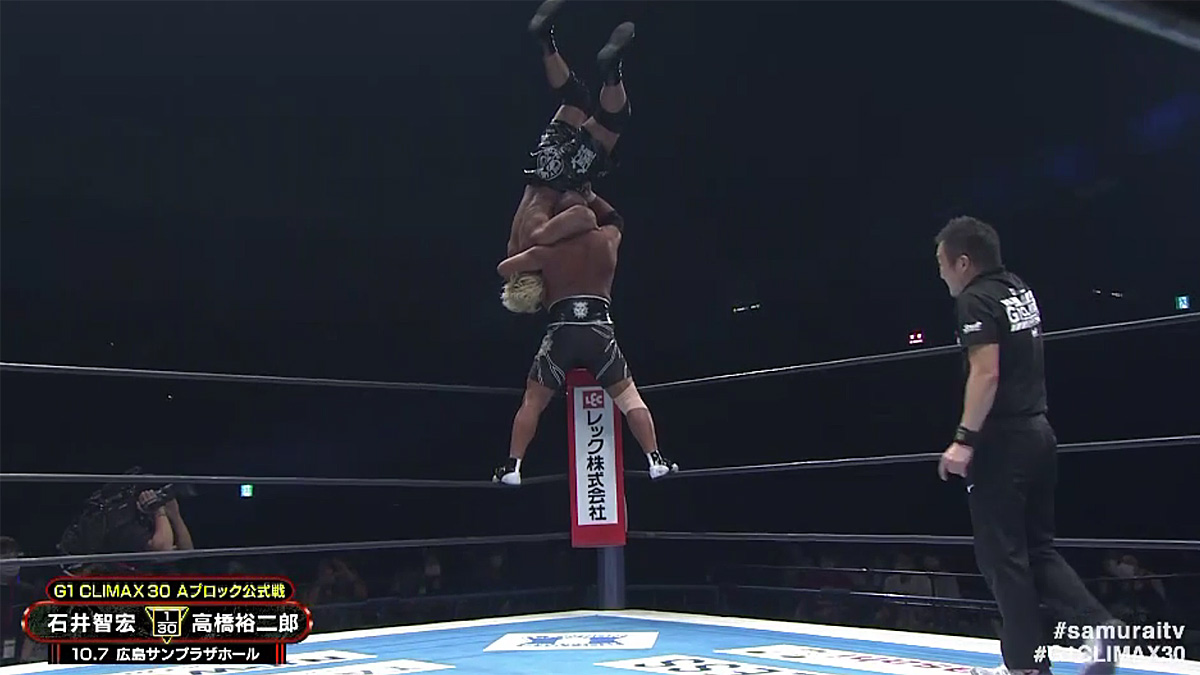 Ishii lifts Yujiro up just to bring him crashing down. Courtesy: NJPW.

Where is Dick Togo or Gedo to help out Yujiro? The Tokyo Pimp doesn’t get any respect. He attacks Ishii before the bell dragging him out onto the floor for a reverse DDT. Yujiro maintains control until Ishii has had enough no selling forearm after forearm, standing up and staring at Yujiro. Ishii is slammed by Yujiro and seems to hurt his hand or perhaps his neck when he hits the mat. The official checks out Ishii as he howls in pain holding his hand or trying to get feeling in it. Ishii does continue the match but is holding his neck quite a lot. Ishii gives Yujiro a stalling suplex from the second rope showing off his strength. Ishii struggles through the bout but gets the pinfall with a brainbuster. The official checks on Ishii after the match. He is still favouring that hand and his neck.

In a spectacular feat of strength Cobb catches Okada in the air and lifts him up for a stalling suplex. Okada steals the win with a quick roll-up.

Like Okada before him Ospreay barely survives his encounter with Suzuki. He gets the win with Storm Breaker.

Takagi kicks out of a Kamigoye. Takagi hands Ibushi his second loss of the tournament with Made in Japan.

After a couple nights of mediocre action except for a few matches here and there the G1 is back on track. Taichi and White were the stars of the evening though as their match made the entire event.