Behind the Gimmick Table: The rush of Road Warriors merch 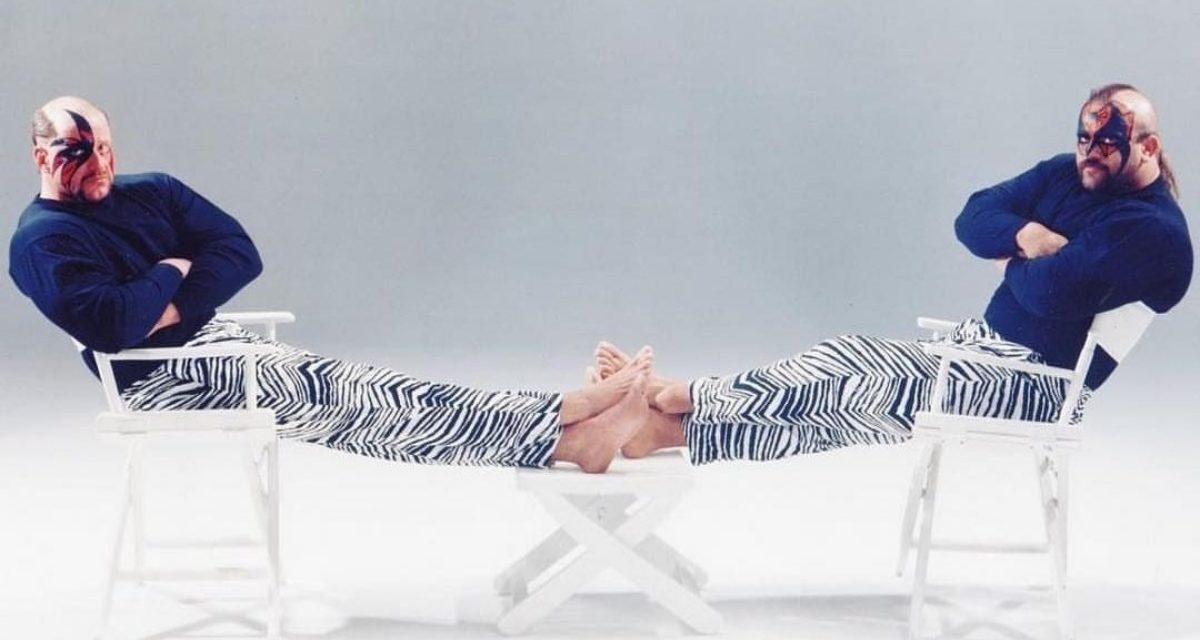 Like most of the top tier talents of the 1980s these images and memories extend beyond their moments within the squared circle canvas live in person or on a screen, but to a multitude of other media. Especially as a tag team gimmick, they were in a division that historically was more gimmicky than singles competitors on average. 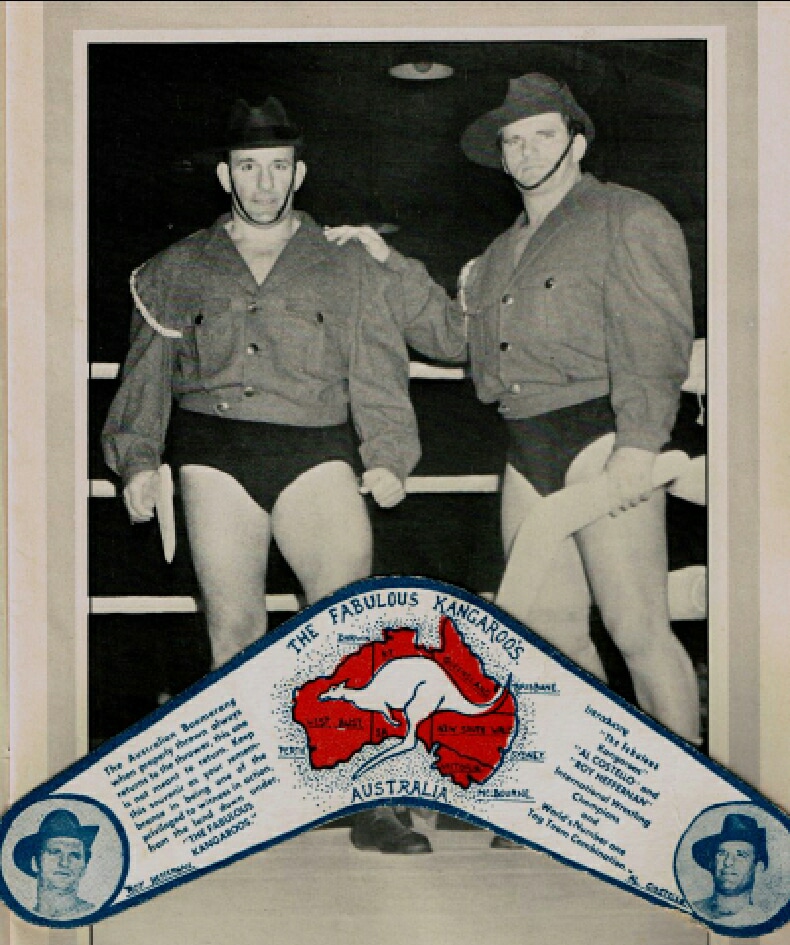 The Fabulous Kangaroos of the 1950s were notable innovators in the genre, and rightfully are listed #1 in The Pro Wrestling Hall of Fame: The Tag Teams, just above the Road Warriors. Complete with bush hats, and boomerangs they entered the ring to the tune of the bush ballad and unofficial Australian National Anthem “Waltzing Matilda.” Back then merchandise was primarily photos and magazines. Money was generated from ticket sales but the Kangaroos were early adopters of using promotional material as an incentive to see their matches live. Much like Bret Hart and Rey Mysterio Jr. in more recent years, the Kangaroos’ boomerangs were items that they would throw to the crowd. The cardboard airfoils were adorned with images of Australiana, the Kangaroos themselves and information about them. When Al Costello continued on the team after Roy Heffernan left, the boomerangs were changed to include Don Kent and, much later, Al Snow.

Thirty years later, the merchandising of pro wrestling exploded. With their facepaint, spiked shoulder pads and “Iron Man” entrance music, the LOD too would have an Australian connection through the film that inspired their personas: Mad Max and its sequel, The Road Warrior. They would also be among those leading the charge as paragons of pro wrestling merchandising and collectibility.

Their look was as toy aficionados put it, extremely “Toyetic.” Essentially, that means that their appearance is just so cool that it translates to toys (and other merch) in a way that transcends genre and era. 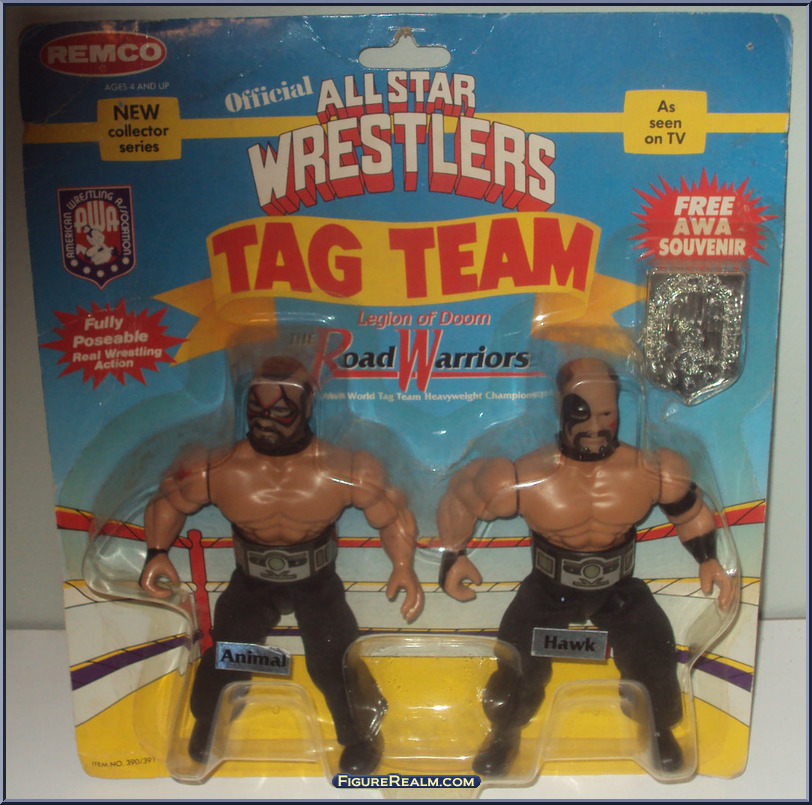 The AWA figures by Remco, which featured the first ever wrestling ring toy, also had the rookie Hawk and Animal figures in 1985. Their likenesses would grace many lines of figures in the following years: Hasbro, Jakks, Wicked Cool, Mattel and many more.

The LOD supplemental roster would also be immortalized as action figures with Jakks producing figures of Heidenreich, and Charapro releasing a Power Warrior in Japan. Japan would also see some action figure like LOD novelties such as Claw Machine Plushies. 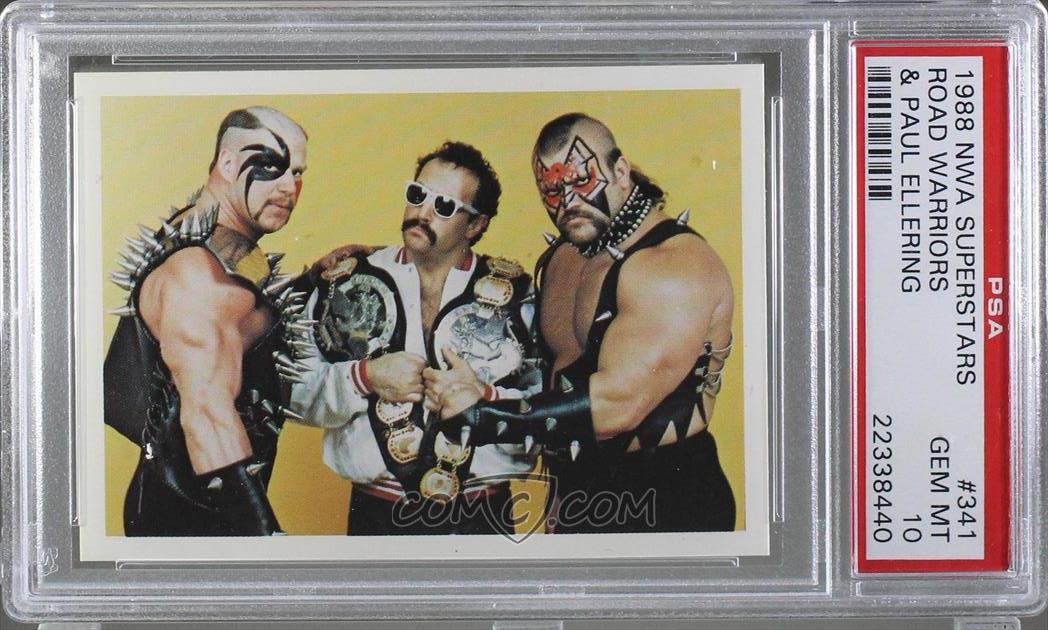 Before the terminology of Rookie Action Figure was common, the trading card would commemorate the rookie era of athletes. The LOD rookie trading cards however would come from another promotion, the NWA series by Wonderama in 1988 and also featured their manager Paul Ellering. 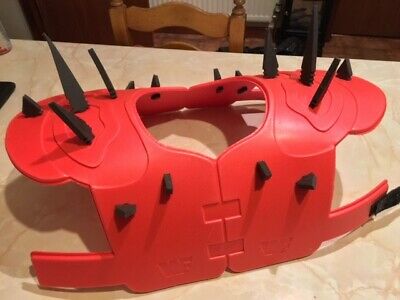 Foam items such as fingers are staples for sports fans of all ilks to support their favourites. Such items hold an interesting place as collectibles, perhaps the most ephemeral of all collectibles. Due to their ability to deteriorate easily, and their unwieldy size, it is rare to find vintage examples in good condition or at all. The unprecedented, genre-breaking LOD have one of the most nostalgic, sought after and unique foam items for wrestling collectibles: WWF Spiked Shoulder Pads and wrist gauntlets, which allowed kids to not only support the LOD but cosplay before cosplay was a thing. 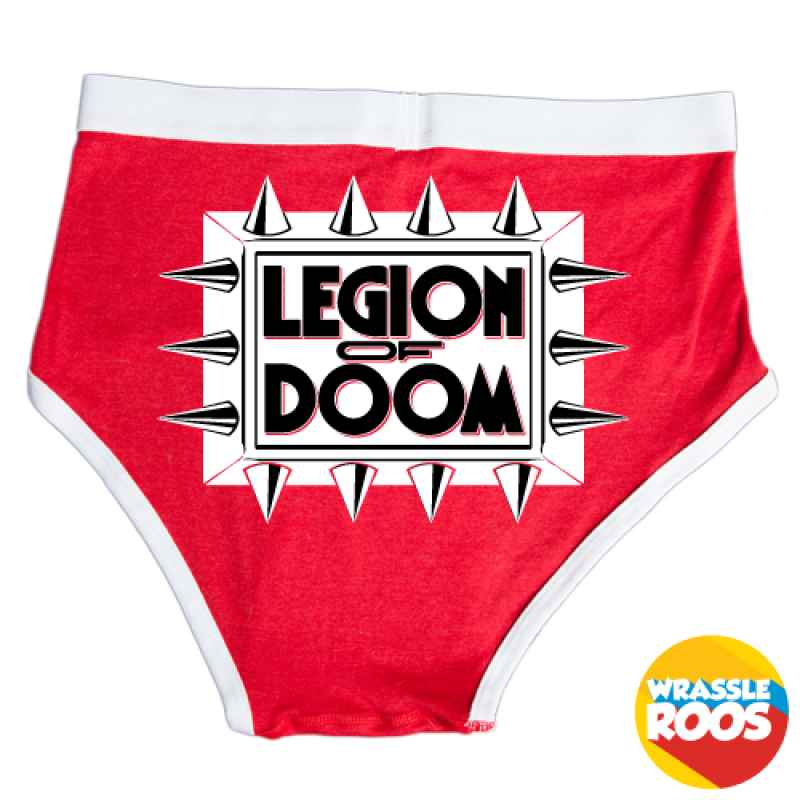 The LOD merch is numerous, encompassing T-shirts, glassware, hats, posters and even underwear. Laurinaitas was active with his Pro-Wrestling Tees store, adapting and changing up the brand, including COVID-19 tees and masks. Their WWF Magazine cover is worth double the others of the era. Much like Animal’s memorable line from their WWF Wrestlefest Arcade appearance, it is not surprising that both Hawk and Animal would branch out to “snack” on the merch pie outside of wrestling.

The Zubaz line of zebra print weightlifting pants was developed by Bob Truax and Dan Stock, who co-owned a gym with the Road Warriors. With the motto “Dare to be Different,” Hawk and Animal were the perfect ambassadors of the brand. The business tag team was a huge success. Since then, the pants have become a bit of a cliche of professional wrestling, though athletes everywhere use them, and the brand has expanded into caps, shirts, and even diapers.

The Road Warriors are an immortal tag team. The Zubaz brand, while facing the same challenges of all companies during a global pandemic, will live on. Collectors will continue to see out their action figures and merch, and the team will continue to show up in video games such as RetroMania Wrestling followup to the aformentioned arcade classic Wrestlefest.

It was a rush then to watch them, it’s still a rush now to collect Road Warriors merch.