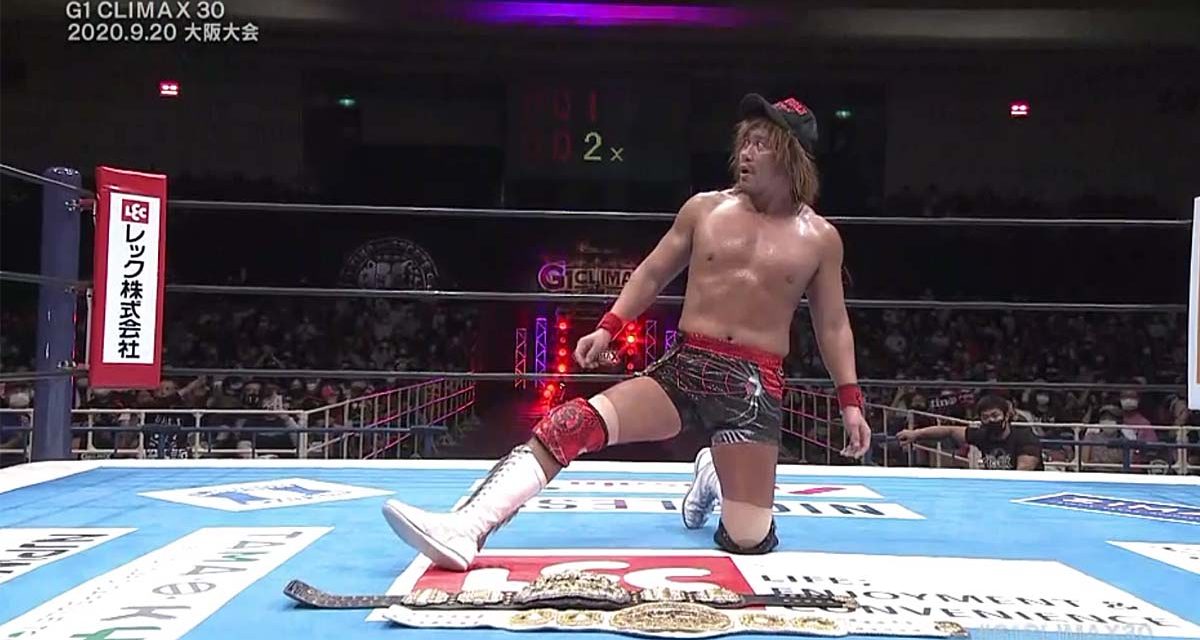 Naito played mind games from the start backing away from several lock-ups. Tanahashi was laser-focused on Naito’s heavily taped left knee. Naito cleverly took a powder so he could rest his knee as the official laid in his count. 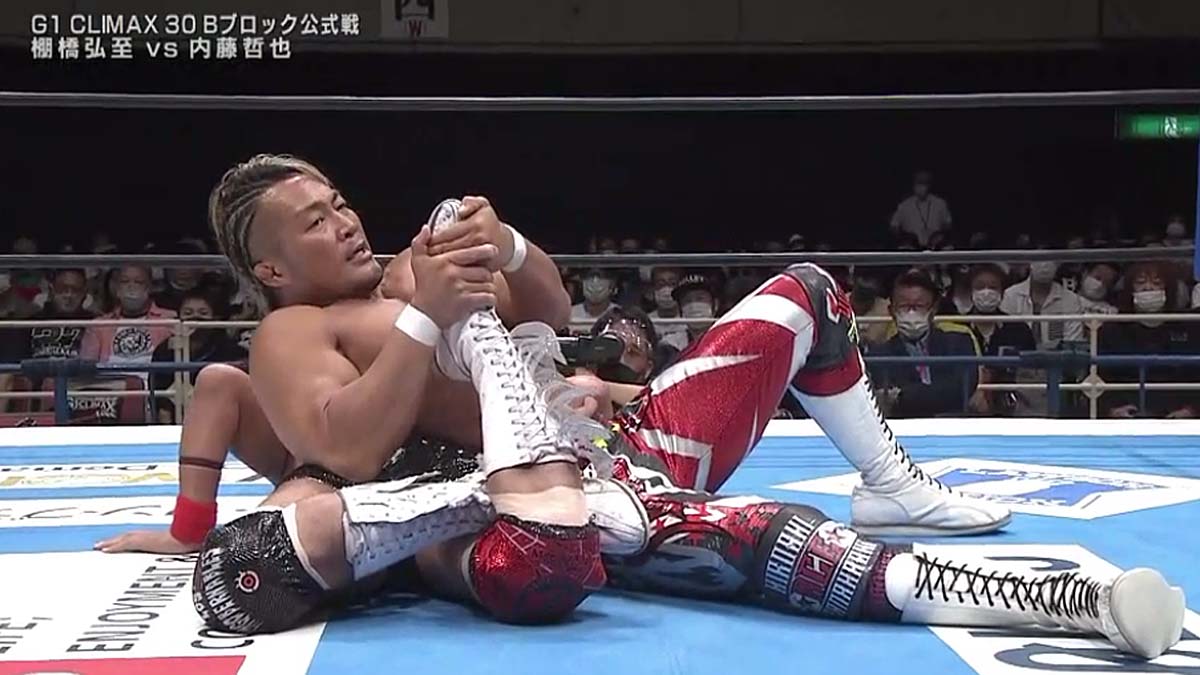 Young Lion Tsuji begins pounding the mat to support Tanahashi. Naito takes a swipe at him.

Tanahashi guillotines Naito with two Slingblades and a High Fly Flow. He goes for another but Naito moves out of the way. Tanahashi hits the canvass hard. Tanahashi kicks out of Gloria but Destino pins him.

Kidd shows so much promise but he taps here to Tsuji’s Boston Crab. 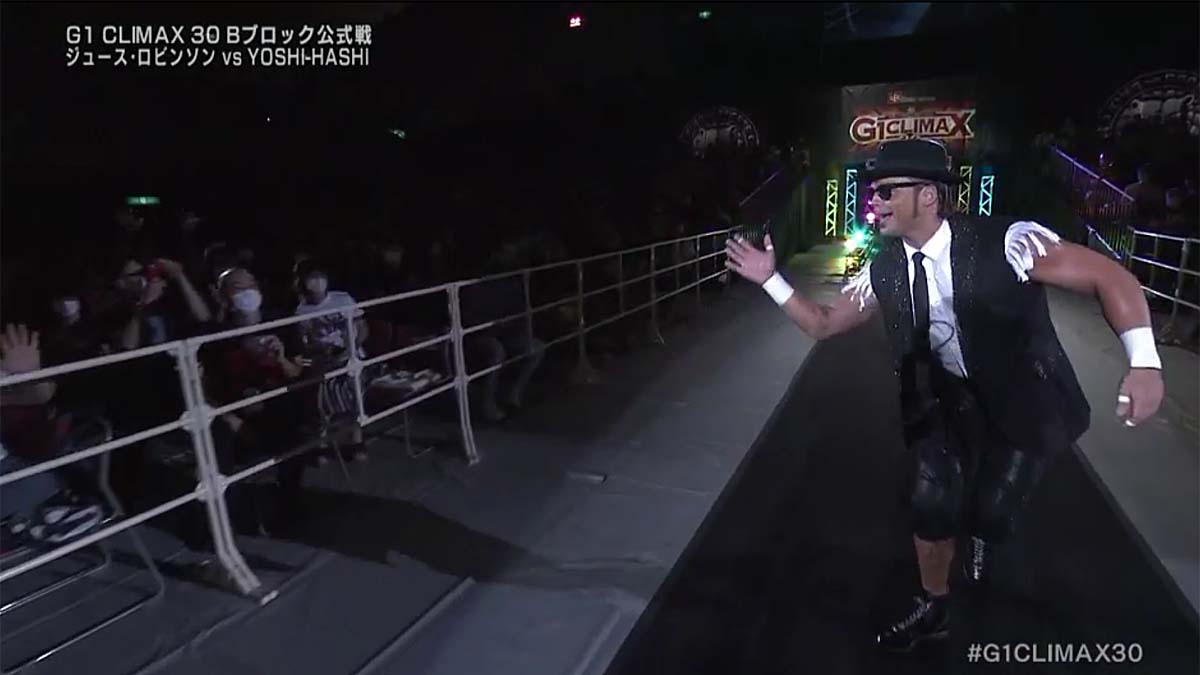 Juice Robinson gets a big welcome from the fans and has a new look. He too hasn’t been featured on NJPW since its return. The fans give him a big cheer when his music ends. “It has been a long time,” says Robinson as he removes his entrance attire. Juice has a lot of fun during the bout. Juice puts Yoshi-Hashi away with Left Hand of God and Pulp Friction. 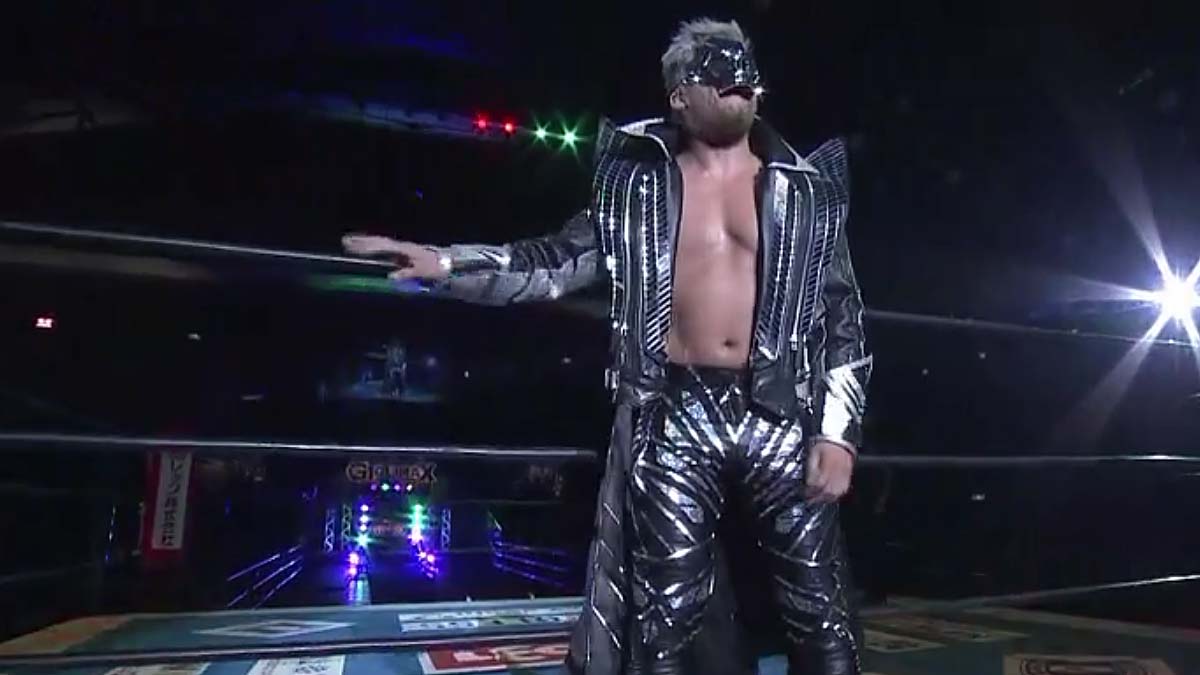 Sanada has a new look too. He has a new mask and robe. The official finds a roll of tape in Yano’s tights. Of course, Yano has no idea how it got there. Sanada rolls up Yano almost getting the pinfall as the official admonished Yano. Yano rips off the turnbuckle pad. Sanada takes Yano and the pad for a rolling cradle around the mat. A dizzy Yano swings the pad around wildly almost hitting the official. Yano stumbles up the entrance way, grabs a chair from the crowd and takes a seat. Sanada stares on from the ring. The official begins his count. 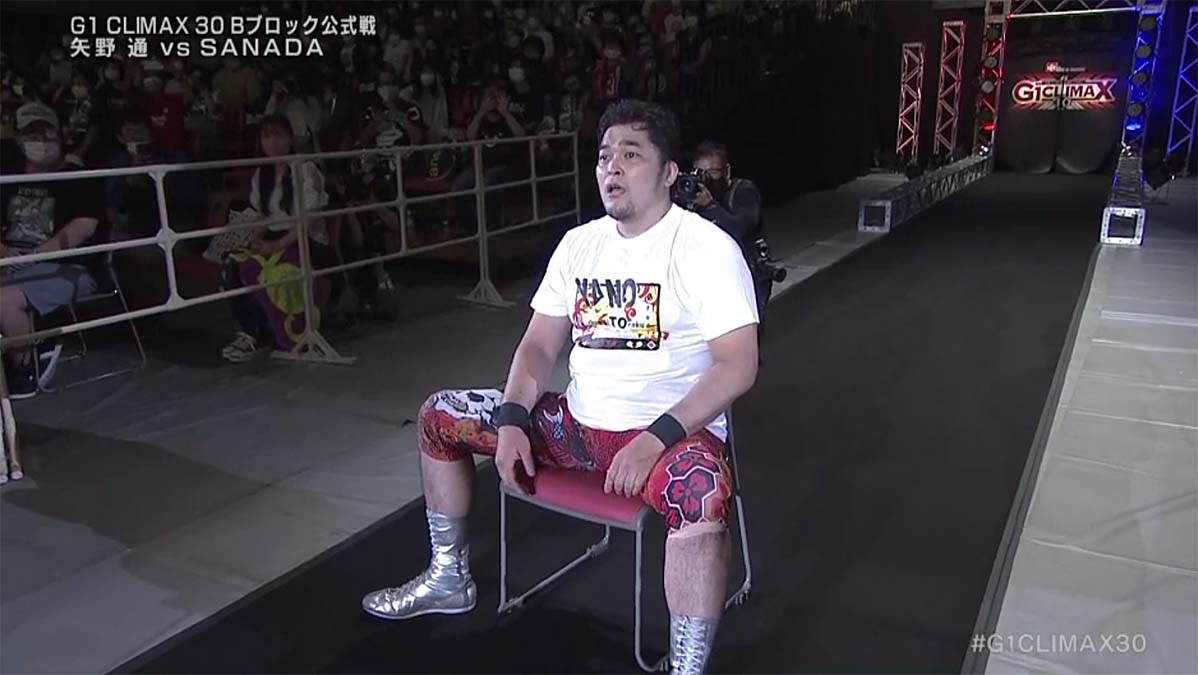 Yano ponders sitting this one out. Courtesy: NJPW.

Yano makes it back into the ring by the count of 19. Yano and Sanada have a turnbuckle pad showdown in the middle of the ring. Sanada wins throwing his pad at Yano. Yano catches it. Sanada drop kicks him in the face. Sanada has had it with Yanko’s shenanigans. He brings him to the entrance way then puts him in the Paradise Lock leaving him there. A Young Lion frees Yano. An angry Sanada attempts to put the Young Lion in the Paradise Lock. As he is doing so, Yano tapes their legs together. Sanada drags the Young Lion to his feet. They hop back to the ring. Sanada is counted out. 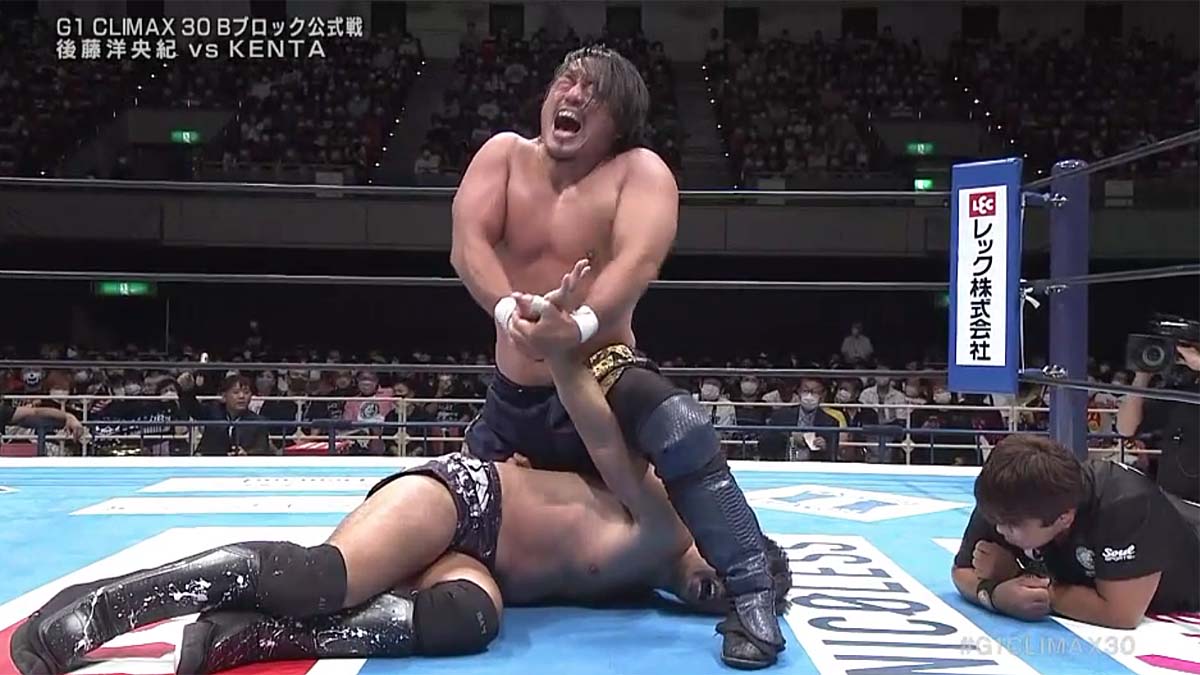 Kenta won’t submit to Goto’s arm bar submission until he finally drapes a foot over the bottom rope. After a botched finish of sorts Kenta makes Goto submit to the Game Over crossface. 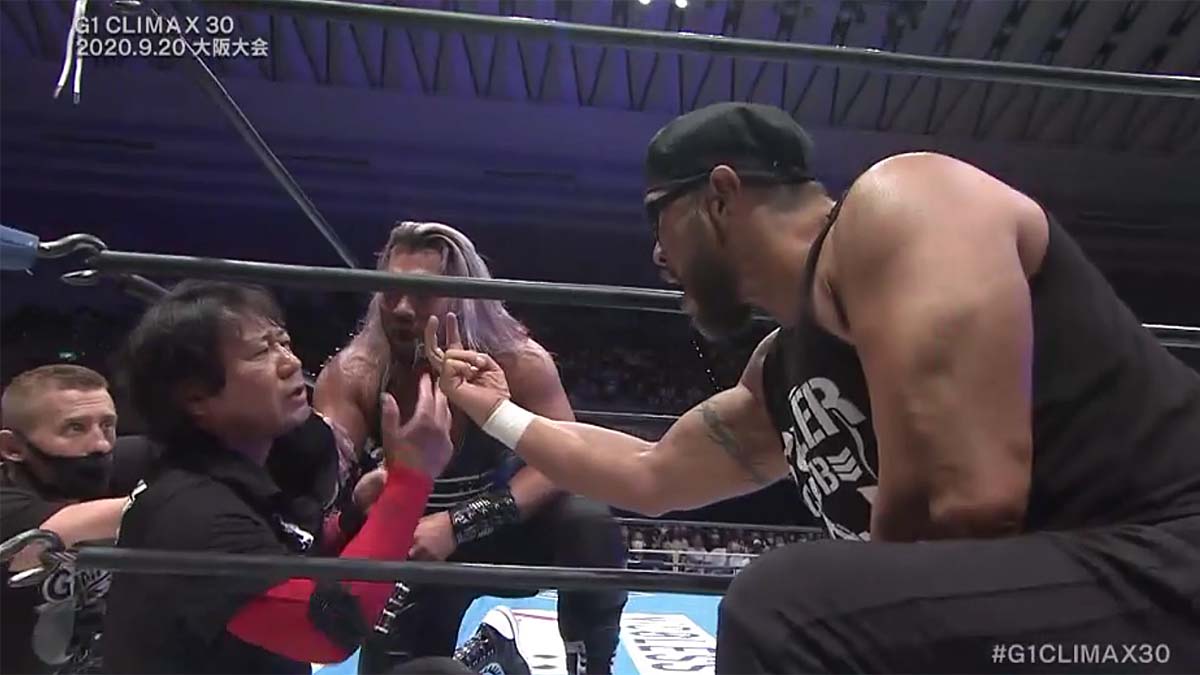 Dick Togo and Evil double-team Sabre Jr. Sabre Jr. survives the beating to roll up Evil for the win stunning the crowd. Evil and Togo threaten Red Shoes after the match.

G1 CLIMAX Night One: Okada and Ibushi put on a classic

Not as dynamic or as uniform as Night One. The big match-ups were on the money though.