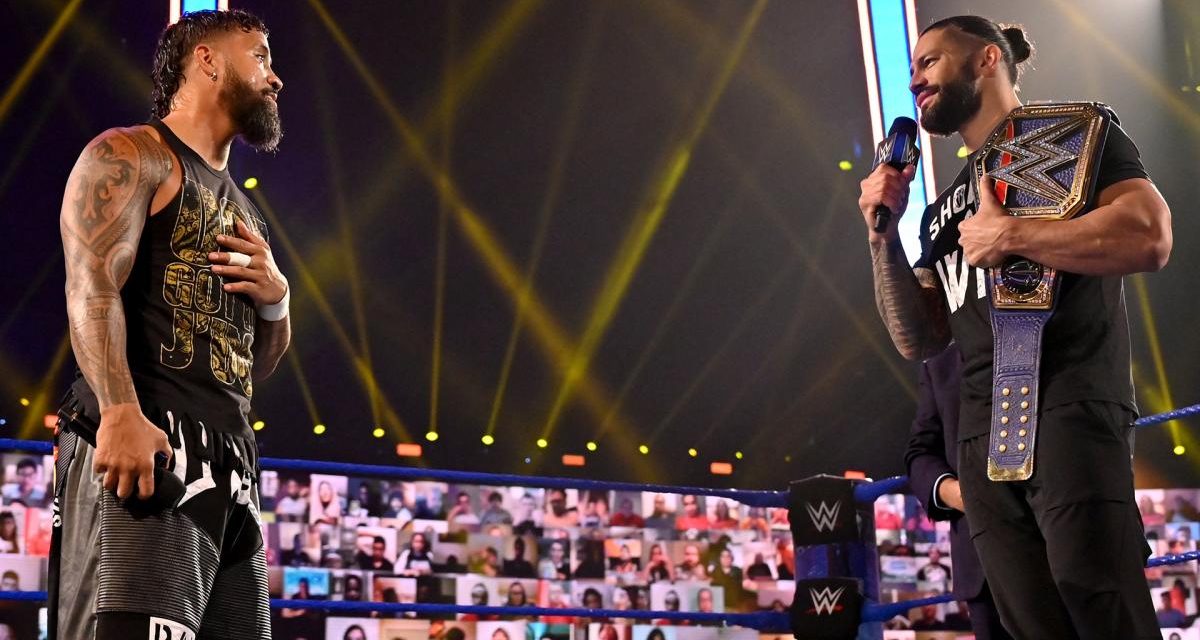 Featuring a Fatal Four-Way to decide Bayley’s opponent at Clash of Champions, and the reveal of a new friend in the Firefly Fun House, this September 11th edition of SmackDown takes us one step closer to Clash of Champions.

We start off the show with a recap of the fatal four way from last week’s main event. Roman Reigns and Paul Heyman open again today. I guess this is their thing now, coming out right at the start, which is nice as we can get it over with. They’re really calling Reigns the Tribal Chief now. No more Big Dog ,which I guess is a plus.

They bring out Jey Uso, who thanks Paul Heyman for the opportunity to face Roman. Heyman calls Roman the Reignsing champion again, and it’s still stupid the second time. Roman also says he’s proud of Jey, as is his whole family. Roman promises to beat him, just like when they were kids.

King Corbin interrupts them, calling nepotism on the whole situation. Sheamus comes out as well, agreeing with King Corbin. Jey challenges the two to a tag match against him and Roman. Sheamus rushes to attack Jey, but Jey takes him and Corbin out.

Before the match, Sami Zayn comes out and raves about being the proper Intercontinental Champion. He’s really not wrong, it’s not like he stopped defending longer that Brock Lesnar has in the past. Adam Pearce brings out some big security guys to escort a livid Zayn to the back. Styles uses the distraction to level Hardy before the bell. Hardy gathers his wits once the match starts, hits a Twist of Fate,  and just misses a Swanton Bomb before the commercial.

When we come back, Hardy is throwing his own body into the barricade to drape his leg across Styles’s chest. An inverted atomic drop by the challenger leads to an opportunity for a Whisper in the Wind, which Styles pretends caught him.

Styles catches Hardy’s leg and drives some elbows to aggravate his injury, and perches himself on the apron to prep for a Phenomenal Forearm when Sami Zayn grabs his leg and pulls him down to the floor, leading to an immediate call for what was presumably a no contest (really, Styles should win by disqualification).

Sami also takes advantage of the champ being weakened and hits him with a Helluva Kick. As Sami leaves, his music plays, which makes you think if the security guys and the production crew are on the same page with whether he’s supposed to be there or not.

Hardy heads up the ramp, waving to the ThunderDome crowd, when he stumbles and seems to pass out. Back from commercial, we learn that he appears to be suffering from dehydration.

The Raw Tag Champions Street Profits are on SmackDown, as Ford and Dawkins are in the Champions Lounge, obtaining grudging permission from Smackdown Tag Champs Cesaro and Shinsuke Nakamura to hang out while they have a match. The two teams will face next Monday on Raw in a Champions VS Champions tag team match.

Quick reminder that Shinsuke and Cesaro still don’t have a tag team theme, which is ridiculous.

Metalik opens fast with a spinning head scissors on Cesaro before helping Kalisto land a splash on the Swiss superstar. The champs take control, with Cesaro landing a strong uppercut on Kalisto followed by a solid body slam. 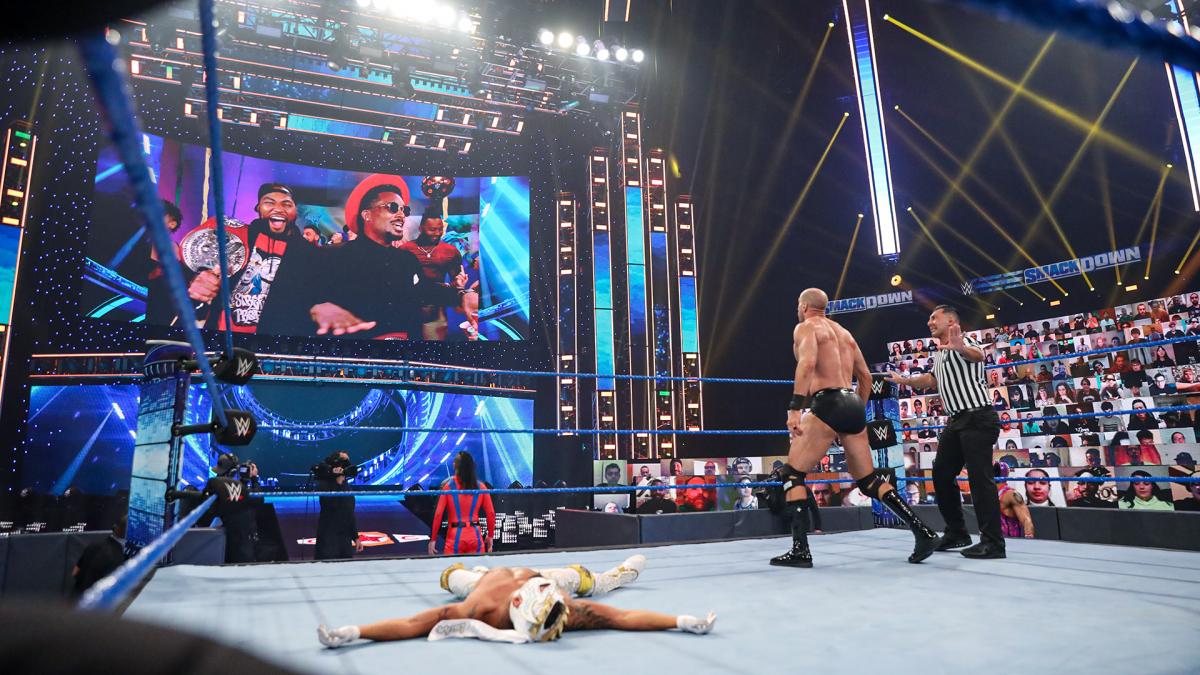 Cesaro & Nakamura are mighty distracted by an unwanted party in their lounge. Photo: WWE

Nakamura enters and drives a running knee into Kalisto as he’s strung across the top ropes. It certainly looks like the champs are in charge, but the TitanTron shows a party happening in the Champions Lounge, led by the Street Profits, which distracts Cesaro long enough for Kalisto to roll him up for the win.

After the commercials, the Lucha House Party enters the Champions Lounge to an uproarious ovation. 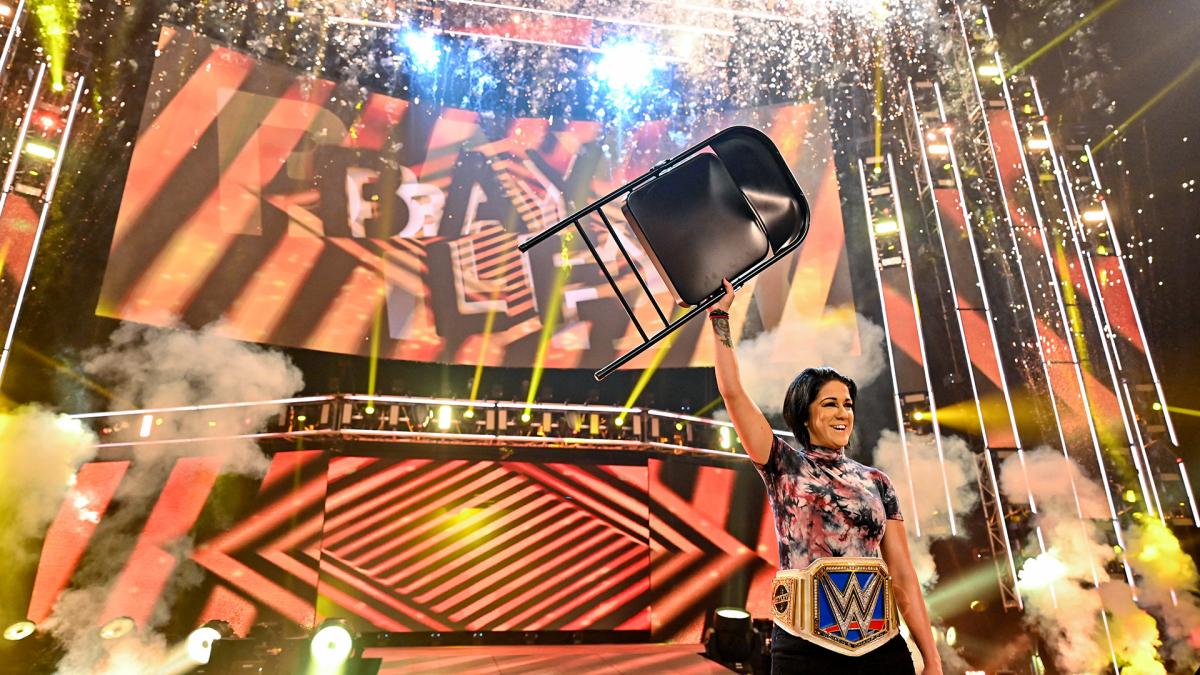 Bayley has a new friend to accompany her on her entrance. Photo: WWE

Bayley is on her way to the ring with a chair, which Michael Cole presumes is the chair used to beat up Sasha Banks. Corey Graves thinks it’s just for her to sit on. Well, she sits on it, so maybe he’s right.

Bayley admits to enjoying every second of beating down her supposed best friend, and she has a message for Banks. Bayley was suspicious that Banks was using her and riding her coattails to success, and she knew this because she was using Banks. She says she didn’t care about their friendship, and never cared about Sasha.

She walks back up the ramp as a Fatal Four-Way competitor, Nikki Cross, makes her entrance. Bayley decides she may as well use that chair for something other than sitting and blasts Cross with it on her way out.

Evans and Tamina have the first extended scrap with Bliss trying to get involved, only to be clotheslined out of the scene by Tamina, while Cross is somewhere still trying to recuperate. Tamina focuses on Bliss, hitting an avalanche splash on her before delivering a kick to Evans’ stomach that sends them both packing for the time being.

Cross gets involved and actually gets the upper hand on Tamina, sending her to the floor and then hitting a flying cross body on Tamina and Evans. Bliss then locks Cross in position for Sister Abigail, delivering it on the floor before leaving the ThunderDome, apparently caught in a trance. 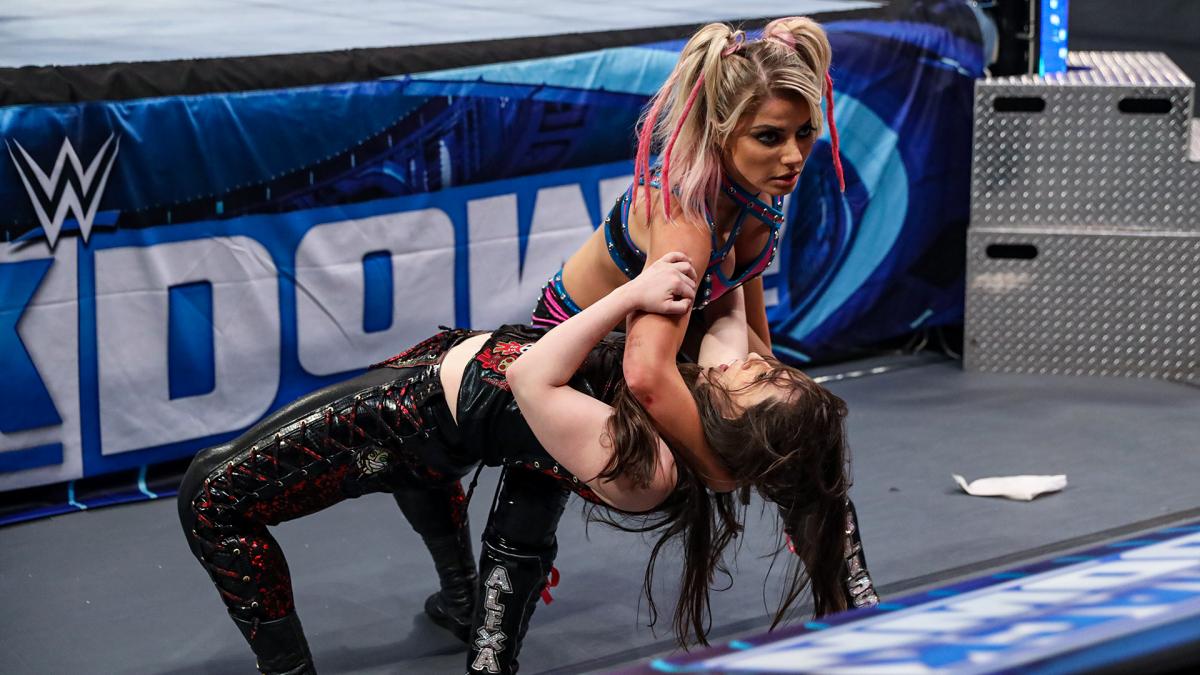 Back in the ring, Evans and Tamina are all alone. Evans uses a drop-toe hold to send Tamina into the corner, then does her handstand swinging kick to follow up. Evans looks to secure a three-count but it’s broken up by Cross.

Quick PSA, Tamina should be a multi-time women’s champ. She’s fun to watch, powerful, and she looks the part of a dangerous, dominant champion. Simple as that. Also, I haven’t gotten so excited about someone doing a move as I did about Alexa Bliss doing the Sister Abigail in a while. Hopefully Nikki Cross wins the title and we get a Nikki Cross vs Alexa Bliss storyline.

We get another teaser for some incoming diva … I mean female superstar.

So wait, Otis got his briefcase back? Did The Miz just bring it to him like “Sorry, won’t do it again?”. The Miz is on commentary while Tucker hangs out on the outside to guard against shenanigans.  Morrison attempts to take Otis down with kicks, but Mr. Money in the Bank shrugs/dances them off and throws Morrison over his head with ease. 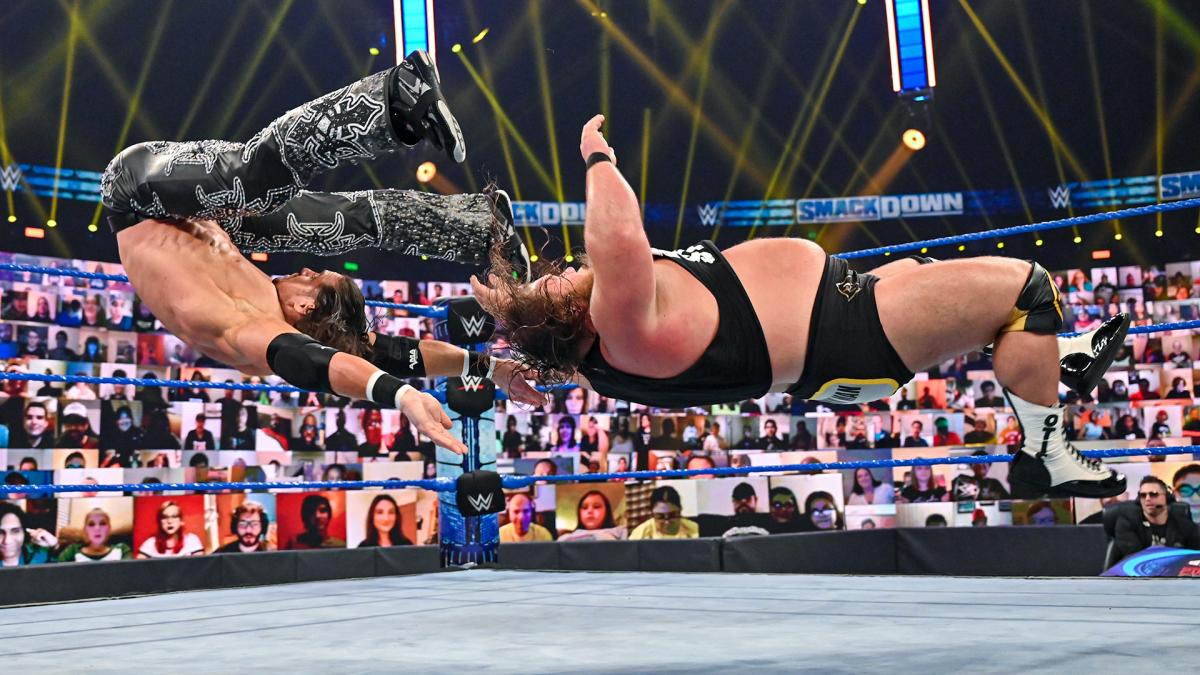 Miz reaches up for Otis, bringing Tucker around to chase him away. The Miz takes off with Otis’ lunchbox, hoping that it will actually contain the contract. As Morrison laughs at the proceedings, Otis runs him over, hits him with a caterpillar, and lands a Vader Bomb for the win.

After commercials, we watch Miz and Morrison open the lunchbox to find that it’s … a lunchbox, because we also watch Otis show Tucker that the real lunchbox was in the briefcase.

On the Firefly Funhouse, Bray looks to introduce his new friend, Pasquale the inspirational parrot, but Pasquale has shuffled off this mortal coil. Bray feels bad about not having poked ventilation holes in the box … but not too bad. The boss, as played by the Vince McMahon puppet that we saw at WrestleMania, says that Bray can’t handle the Firefly Funhouse alone, and brings in Wobbly Walrus (the Funhouse version of Paul Heyman) to help him manage it. They’re making us wait for Alexa. I respect that.

Corbin and Sheamus charge out to attack Uso on the ramp, bringing him into the ring. The referee starts the match before Reigns arrives, and neither Cole nor Graves say anything about the lack of Reigns during the opening moments. This is a dumb idea. Roman never got a chance to enter and they just rang the bell.

Predictably, Jey is having a hard time in this apparent handicap match, though a Samoan Drop on Corbin gives him some hope. He tries to charge Corbin in the corner, but the King dodges and Sheamus tags himself in to deliver White Noise. As Sheamus looks to follow up, Reigns’ music hits and that distraction allows Jey to battle back against both opponents.

After Jey hits lands a suicide dive on Corbin, sending him into the announcer’s table, Jey climbs the rope for a splash onto Sheamus. Reigns tags himself in from the apron, waits for the splash to land, then enters for a spear on Sheamus for the pin.

The victorious cousins head up the ramp to celebrate, though Reigns hardly appreciates it when Jey gets his hand on the Universal Championship Belt while Reigns hoists it up.

The show went back to a normal amount of matches, which was nice after last week, but each match seemed so taken over by a story that it’s not about the match any more. I’d like to just see some uninterrupted wrestling action.