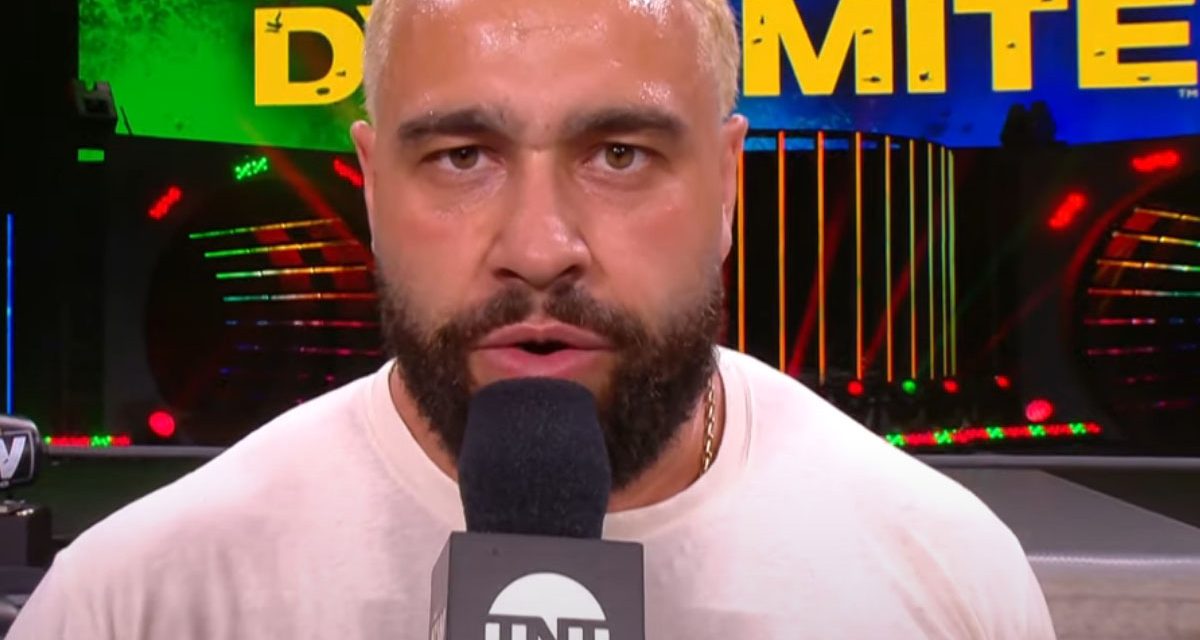 Hey, we just had an AEW pay-per-view, didn’t we? Four days after All Out, we’ve got some new champs and some old ones, and they all figure to have some role to play tonight in Jacksonville. Daily’s Place is the venue once again as we go live on TNT.

As we kick off what Tony Schiavone calls a very special episode of AEW Dynamite, both Chris Jericho and MJF pull up simultaneously, and of course, both believe he is referring to their match as the one from All Out everyone is talking about. The Demo God is sympathetic to MJF, saying he got cheated by Jon Moxley, and gets compliments in return. However, as they walk away, separate cameras track them calling each other losers …

These teams have faced off before, but the difference now is that Butcher, Blade and Eddie Kingston are ringside to support the Lucha Bros. The humidity continues to wreak havoc on the AEW talent tonight, with Jungle Boy slipping as he tries to leap off his partner’s back. Call that the downside of wrestling outdoors in Florida in early September. Seeing the Lucha Bros. in action makes me wistful about two things: How hot they were when AEW first got started, and that we never saw if Death Triangle could take off. This won’t help them with the former, as Jurassic Express gets the win.

An agitated Kingston doesn’t like to see Fenix and Penta shoving each other after the bell, berating both of them and telling them to shake hands. Penta shoves his younger brother instead, but Kingston is eventually able to broker peace. He also adds that he was never officially eliminated from the Casino Battle Royal, telling everyone and no one to “look up the rules.”

Jake Roberts has a message, albeit a slightly incomprehensible one, for Moxley. But the big news here is that Lance Archer actually speaks. That’s different.

The announcers say it’s good to see Matt Hardy making his way to the ring, and that’s no lie after the nasty fall he took at All Out. After thanking the fans, Hardy says he knows a lot of people were concerned for his well-being, and he’s happy to report that he’s expected to make a 100% recovery. He apologizes to his family and fans for putting them through something that made them worry, adding that maybe it’s good that his feud with Sammy Guevara is over so they didn’t keep escalating things. Hardy wants to buckle down, get healthy and pursue his first AEW championship. I keep waiting for Guevara to crash this and turn it into an angle, so it’s a pleasant surprise when the segment is played earnestly all the way through.

Just as I was about to wonder aloud whether Angelico has any singles victories in AEW, Schiavone chimes in to say he got his first one this week on AEW Dark. Alrighty then. Certainly, the Hybrid 2 has been almost completely banished to Dark, so it’s good to see them on Wednesday even if Angelico is going to be doing some freshly squeezed jobbing. The Orange Punch seals the deal.

Santana and Ortiz launch a post-match assault on Cassidy, but are quickly chased away by the Best Friends. Chucky T says their beef needs to end, and it sounds like it will next week, out in the parking lot. Trent says he’s going to make his mama proud. I’m sure she already is, sir.

Back at the Young Bucks locker room, it appears the Jacksons are more interested in handing out invites to the Superkick Party instead of talking. Poor Alex Marvez.

Now the moment you’ve all been waiting for: the reveal of Kip Sabian’s best man. A guy named Puff comes out, but he’s just there so Superbad can promote Twitch again and tweak WWE. Brian Pillman Jr. enters the ring next, but it’s not him either. Maybe third time’s the charm. The actual best man is … Miro, perhaps better known for his time in WWE as Rusev. Not Brock Lesnar, but not too shabby. The fans immediately start a “Miro Day” chant, which he acknowledges. “Ten years in the same house under the same glass ceiling with an imaginary brass ring,” he says before saying you can shove that brass ring up your ass. Miro is All Elite, folks.

Earlier today, Schiavone spoke with Hangman Adam Page, who admits that it was his fault that FTR was even in the tag team title match in the first place, and goes on to point the blame inward for everything going on with the Elite and the Young Bucks as well. It sounds like he’s up for an attempt to regain the tag team gold, but you have to wonder if Kenny Omega feels the same way.

Excalibur reminds us that Jericho is coming off consecutive losses to Cassidy and is looking to reestablish himself atop the AEW food chain. That’s bad news for Janela, particularly since Jericho could get jealous at any minute of his luscious locks. At least you used to have hair like that in your WCW days, Chris. Some of us never have. Apparently this is a No DQ contest too, which is relevant because Jericho uses a fire extinguisher on Kiss to help his team win.

Jericho uses his post-match mic time to reveal that he and Hager are going to chase the tag team titles. I don’t hate that idea.

Let’s hear from MJF. Unsurprisingly, he’s ticked about Moxley cheating to win at All Out, but he’s even more upset at his campaign staff. He fires everyone but does take one last piece of gum from Gum Guy. Maybe he’s taking things too far by getting in the face of Wardlow, though MJF reminds his muscle about who writes the checks. As they leave for some planning, maybe it’s Wardlow who deserves better?

Next wrestler to the promo spot please. This time it’s Moxley, who pays Archer some indirect praise by talking him up as a formidable opponent. But his rhetorical question is also valid: Right now, do you really want to bet against him?

Man, this is a talky episode of Dynamite. The roster assembles outside the ring for a celebration of FTR’s title victory, which consists of Tully Blanchard talking very loudly and the champs running down pretty much everyone else. Jurassic Express gets to wrestle the top guys next week, but it sounds as if it’s only for a shot at a title shot. Cake gets smashed in Luchasaurus’ face, ice gets dumped on FTR, and Marko Stunt has himself a hearty laugh.

Speaking of laughs, Ricky Starks seems to want to have one at the expense of Darby Allin. You may recall that we last saw him carrying Allin out in a body bag, so his warning to Darby is kind of just being done through the power of TV tonight. Taz likes the promo, though.

Rose and Guerrero are being promoted as Vicious Vixens. Conti is being talked up for being new to AEW, though we’ve already seen her seemingly offered a spot in the Dark Order. Also, Cody has breaking news to deliver, and the Young Bucks have been fined $5,000 for kicking Marvez. Oh yeah, and Rose wins.

Perhaps the only member of the wrestler we haven’t heard from tonight is Omega, but never fear — he talked to Jim Ross earlier in the day. He refers to both chemistry and magic between himself and Page, but he also speaks about the perception that he was seen as the ace of the company early on, and that it took teaming with Hangman to finally get some direction when that didn’t exactly turn out to be the reality. So what’s next? Kenny talks about other goals he wants to achieve and a return to singles action. I smell a potential feud without an out and out betrayal, and that would actually be different and refreshing.

Great comment by Excalibur about how Dustin is dangerous because everyone “expects him to play the hits” but he keeps busting out new stuff instead. Honestly, that is impressive for a veteran with his history and pedigree. He doesn’t figure to have much of a chance to pull off an upset here since Lee only recently snagged the belt, so this is purely a “hey it’s fun to see a guy like him in a title match” deal. Just when it appears they may fight until TV time remaining has run out, Lee hits a discus lariat to retain.

The rest of the Dark Order comes out to celebrate the boss’s win, though Lee still doesn’t want to see Colt Cabana in there with him, and Evil Uno is forced to escort him to the back and play peacemaker. Awkward! Lee and company beat up on Rhodes and QT Marshall, with Lee kicking The Natural in the junk for good measure. Because they’re bad guys. See you in seven!

Or maybe it’ll be eight! Because of the NBA Playoffs, the date for the next episode of AEW Dynamite is so far uncertain. It could be on its normal Wednesday night, or it could be bumped to Thursday. Stay tuned to AEW’s social media accounts to let you know when it’s decided. and if you wanted to follow Slam Wrestling on Twitter as well, we would be much obliged and also fill you in.

The next TV episode after a pay-per-view can be exciting and unpredictable, but this was one of my least favorite editions of Dynamite in recent weeks. Way too much housekeeping and not enough great in-ring action to make up for it. Now that the stage is good and set, things should move upward from here, and next week’s show — whenever it airs — already looks better.