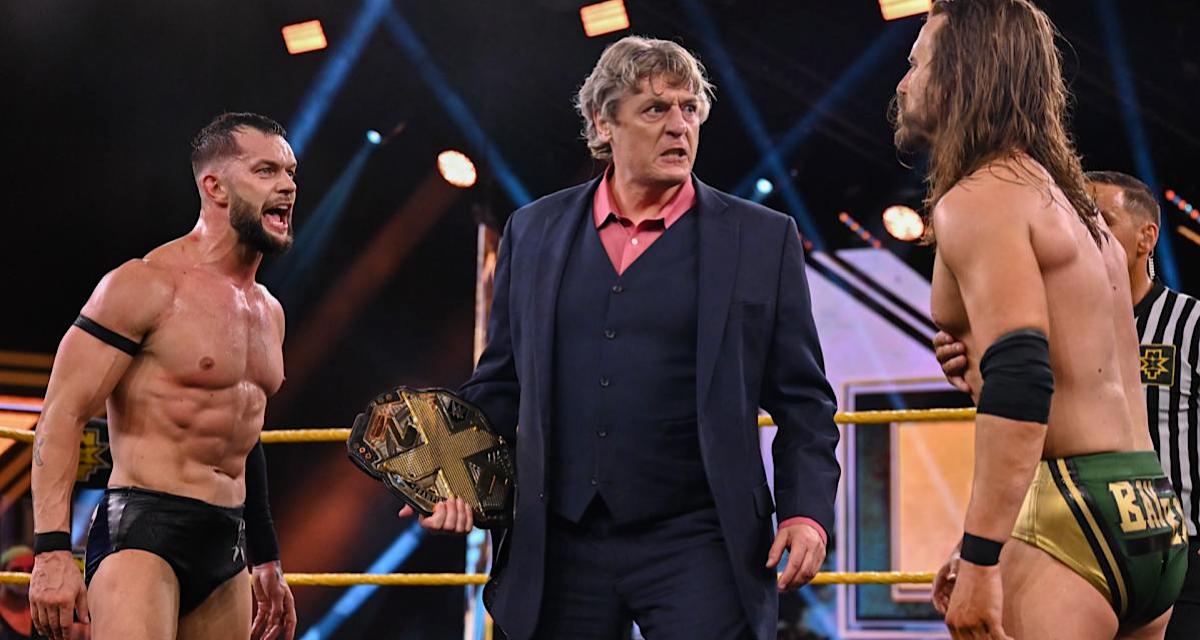 After the newly-crowned NXT Champion Karrion Kross announced his shoulder injury and indefinite leave of action, the yellow brand constructed a stellar four-way, 60-minute Iron Man match to determine the new NXT title holder. The bout’s competitors and stipulation set up a no-brainer mat-classic that would end with a new champion gloating his victory. Apparently it wasn’t that simple. Still, the highly anticipated battle of NXT’s cornerstones certainly delivered during this time of uncertainty in both the world and NXT. 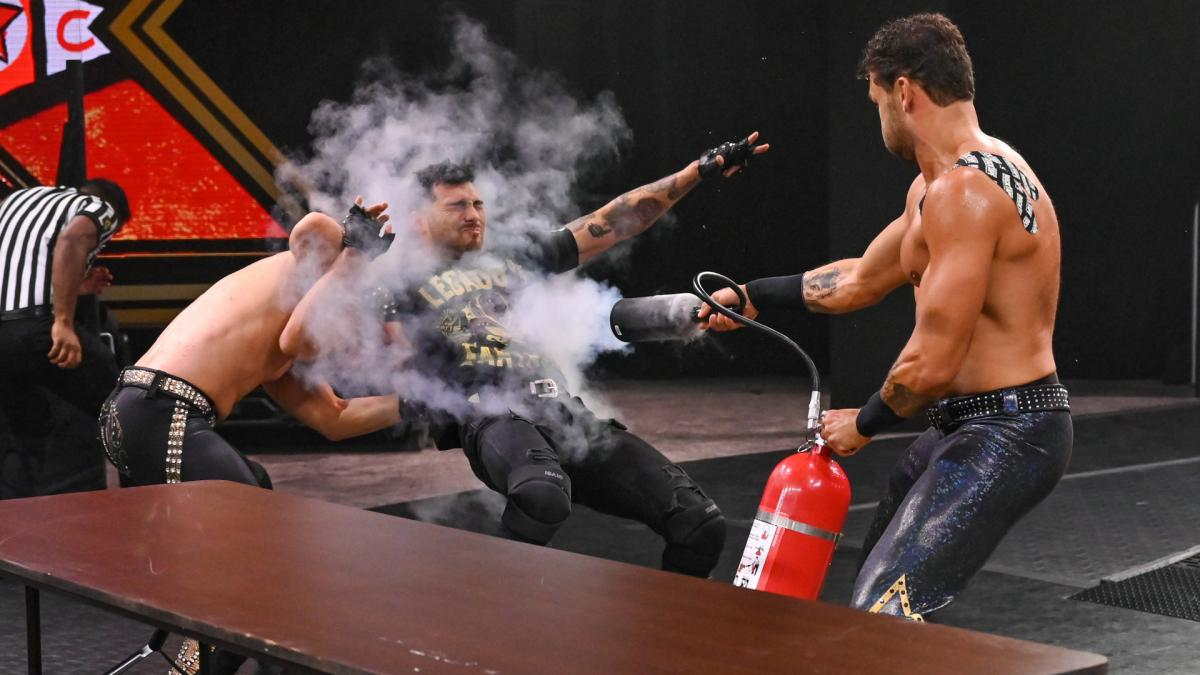 The heel stable immediately takes out the opposition as they bring out tables, ladders, chairs, and other weapons. After some brawling, Fandango does the ladder-helicopter spot and whips his partner into Raul Mendoza’s crotch. Tyler Breeze introduces a fire extinguisher —  a street-fight necessity — and extinguishes the ‘el fuego’ faction before commerical. Some awesome spots were missed during break, but shown afterwards: Legado Del Fantasma’s triple Coast-to-Coast for one. Eventually, Fabian Aichner and Marcel Barthel — who lost their titles to Breezango last week — interfere and beat down Breeze. But from above atop a forklift, Fandango and Scott dive onto the mass. Where’d they get the forklift? But a cool visual regardless. Scott plants Santos Escobar with his signature JML Driver for the victory.

The opening contest felt very rushed. A lot was cut due to commercial, and it would have benefitted from an extra ten minutes.

Catanzaro gets an early advantage, but LeRae quickly sends her to the floor. The former eventually makes a comeback, but LeRae catches her with a submission. With her opponent’s arms tied, LeRae stomps Catanzaro’s face into the mat. With that, LeRae gets the win.

LeRae takes the mic saying she’d like to reconnect with Nox as well. NXT seemingly cannot produce a show without filler women’s matches. 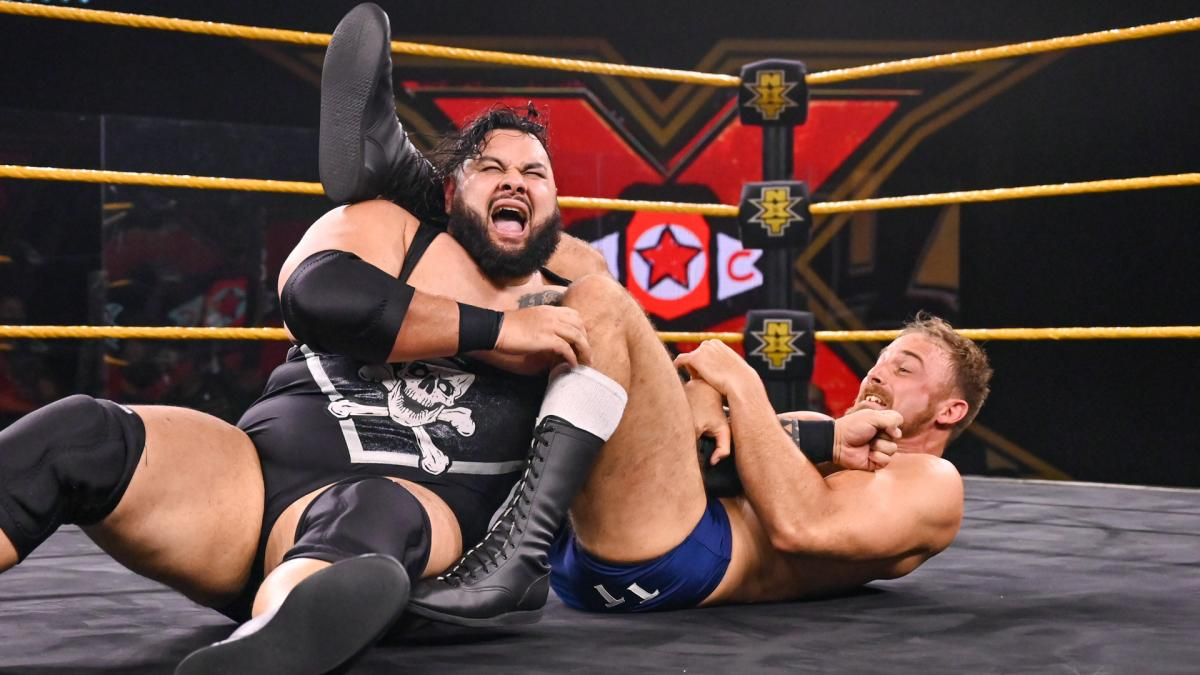 The bigger Reed strikes down Thatcher as the latter returns with stiff favors. Thatcher gets an armlock, but Reed continues the offense with an elbow and suicide dive. As Thatcher rolls back in, the returning Austin Theory attacks Reed. Thatcher takes advantage, targets the injured left arm, and taps Reed out. Tonight’s main event has just eaten away at the undercard’s limelight.

Before the second hour arrives, the ‘NXT cornerstones’ competing in the four-way, 60-minute iron man match make their respective entrances. This has some serious match-of-the-year potential!

Gargano retreats to the floor as Ciampa and Balor brawl. The returning Ciampa takes control, charging at his opponents outside the ring. He works down Balor until Cole throws the former out, and Balor takes advantage. The opportunistic Gargano finally makes a comeback and keeps the pressure on his opponents before it’s Cole’s turn to shine. Before commercial, Balor holds Ciampa down with a chinlock. The first ten minutes had an obvious turn-taking structure, but there’s still another 50 to get crazy.

Cole hits a Pump Kick and Ushigoroshi on Gargano for a two-count. He Superkicks Gargano and Enziguris Ciampa, and everyone is laid out. Cole attempts the Panama Sunrise, but he’s halted by the Irishman who ultimately gets caught in the inevitable Tower-of-Doom spot by Ciampa. The again-opportunistic Gargano attempts to pin Balor and continues the attack on the latter. Balor hits the 1916, Slingblade, corner dropkick, and attempts the Coup De Grace before Ciampa catches him with an Air Raid. 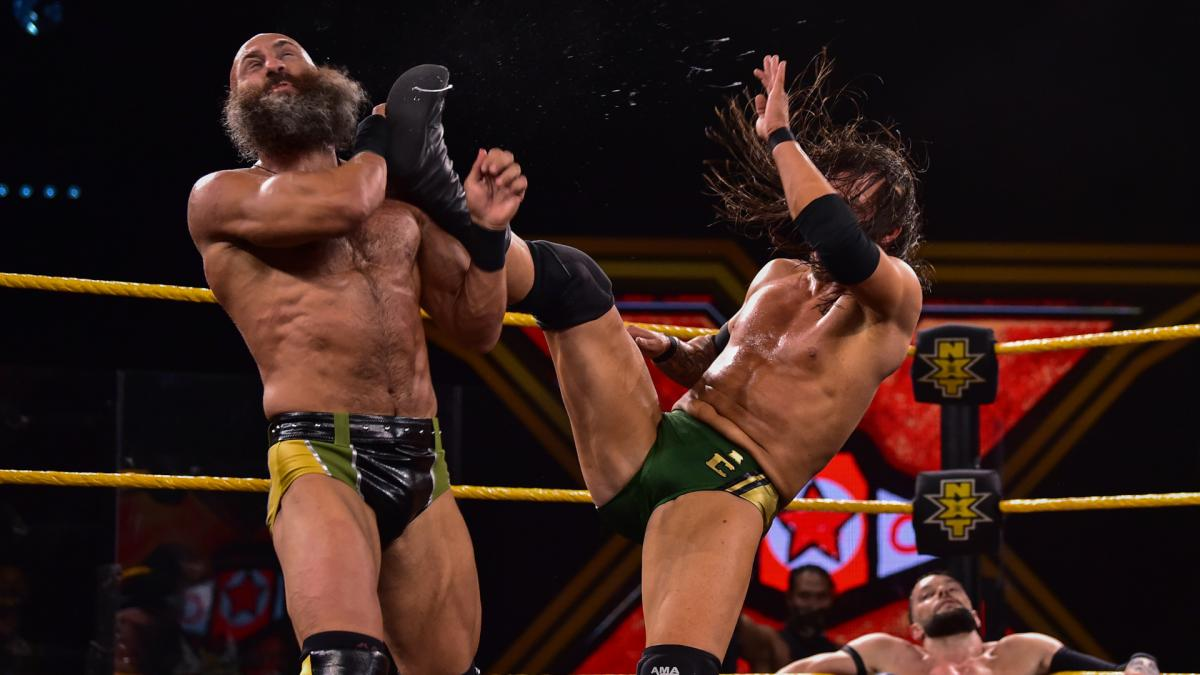 Back from picture-in-picture, former Bullet Club members Cole and Balor ‘two-sweet’ each other before the latter throws the other out. He follows with a tope-con-hilo and charges at everyone ringside with dropkicks. Balor connects with the Coup De Grace on Cole to score the first pinfall. Oddly, Full Sail erupts in unanimous jeers. “The Prince” retains control and stomps away at his opponents before commercial.

Ciampa looks to slingshot Cole into the ring’s infrastructure, reminiscent of last week, but Balor halts him. As the Irishman attempts to capitalize, Ciampa hits the Willow’s Bell and Fairy Tail Ending. But the cunning Gargano steals the pinfall. Proceeding the 30-minute mark, Balor and Gargano are tied with one fall. Cole hits The Last Shot on Ciampa and Superkicks Balor and Gargano before delivering Panama Sunrise on the latter; the ‘Era leader gains the pinfall. “Psycho Killer” Ciampa hits simultaneous Willow’s Bells on Gargano and Cole, following with the Fairy Tail Ending on the latter for the tying pinfall. At 40 minutes, each competitor has one fall. 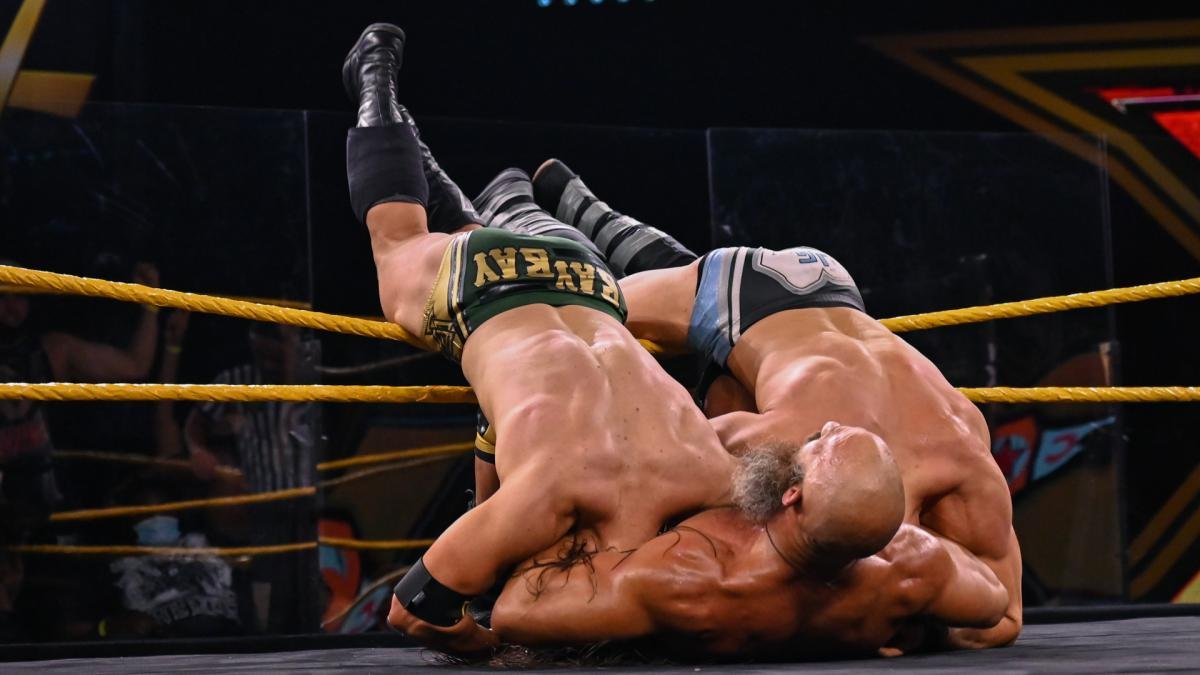 The four men square off and trade blows; Balor and Ciampa collide as Gargano and Cole Superkick each other ringside. Moments later, Ciampa delivers two running knees to Balor and throws the others into the plexiglass. Cole gets Ciampa into a Figure Four before picture-in-picture. Balor then whips Ciampa before the latter crumbles under his bad knee; “The Prince” takes advantage with a single-leg submission. He climbs the ropes and attempts his finisher before Cole and Gargano deliver double Superkicks. Gargano dives onto each opponent and DDTs Balor ringside before commercial.

As the time ticks down, Gargano cinches the Gargano Escape on Cole before Ciampa pulls them out. Ciampa takes out nemesis Gargano with a slingshot into the ring’s infrastructure with two minutes remaining. Ciampa hits an Avalanche Air Raid on Gargano, but from the top, Balor connects with the Coup De Grace on Ciampa for a pinfall. As time runs out, Cole gets another pinfall after delivering The Last Shot on Balor.

An outraged General Manager William Regal storms the ring. He sternly announces that Balor and Cole, both tied at two pinfalls, will compete one-on-one for the NXT Championship at Super Tuesday 2. After this epic bout, there’s no reason to complain. 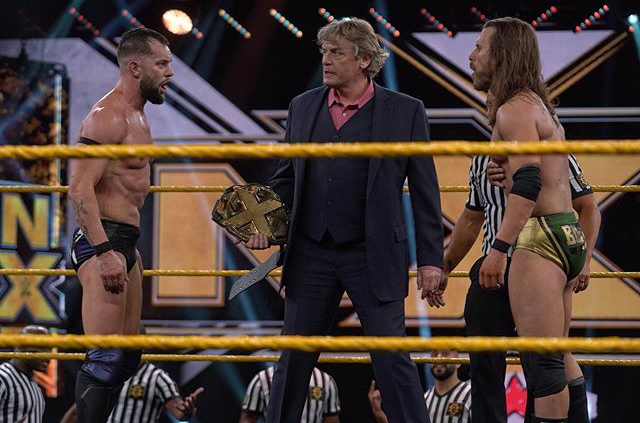 The four-way, 60-minute Iron Man match was a fun one, no doubt about that. It suffered from multiple commercials and a rather predictable match structure, but it couldn’t be helped. The opening contest was cool, but that’s about it for the first hour. Patiently waiting for Super Tuesday 2.