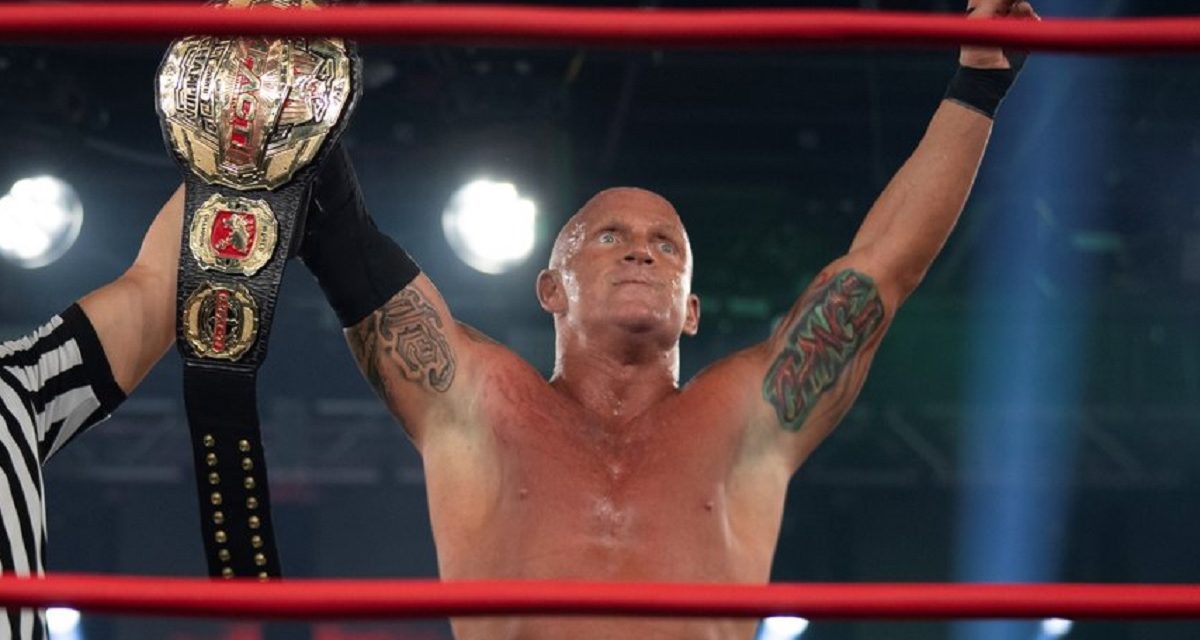 When Eric Young returned to Impact Wrestling earlier this summer, him winning the world championship wasn’t a question of “if” but of “when”. Well, that question was answered on Tuesday night, when he cheated his way to victory over Eddie Edwards to capture the gold. And as the story of his title reign started, another story – the Wrestle House saga – came to an end.  With a new champion and the return of the Wrestle House crew to the roster, there’s a lot of potential in what’s to come. All this, and twerking too!

Callihan attacked RVD during his provocative entrance with Katie, and the fight immediately spilled to the floor. Sami whipped RVD into the barrier repeatedly, but a distraction by Katie let RVD turn the tables. Katie would act as a distraction a few times, and at one point, she even grabbed Sami’s leg to give RVD the advantage. Later in the match, she tried to distract Sami with a twerking exhibition. But he wasn’t foiled, and in the end, he reversed a rollup attempt and held RVD down for the three-count. After the match, RVD and Katie attacked Sami, and they lay a beating on him with his boots and her booty.

Hernandez beat Fallah Bahh in an arm wrestling contest, adding to his stack of bills. Reno Scum came in and reported to Hernandez that there was no sign of Heath in the building, so it will apparently mean that Rhino will be in a 1-on-2 disadvantage in their match tonight. They told Hernandez they’d take out Rhino permanently, but if they did, they wanted all of his arm wrestling winnings. He agreed to the stakes.

In intercutting talking head segments, Rosemary, Taya, and John E. Bravo recapped the three-way drama between them that’s led to the match that will take place later tonight between the two women, with Bravo on the line.

Because Swinger lost the match against Crazzy Steve last week, he had to dress up like Steve, complete with clown make-up, which everyone but him was amused by. Tommy Dreamer told Bravo that he would get to control his own destiny as he was going to referee the match between Taya and Rosemary.

Reno Scum attacked Rhino as he was making his way to the ring, and they gave him a double-team beatdown in the opening seconds. They continued to pummel the big man with double-team moves and it looked like this one was going to be over quickly. But just as Reno Scum were going to end things, a masked cameraman hit the ring. Don’t worry, this wasn’t a Retribution-style invasion (thank goodness, because nobody needs that). But rather it was Heath, who dropped Adam Thornstowe with the Wake Up Call while the referee was turned the other way, leaving him slim pickings for Rhino to make the cover. After the match, Heath unmasked and he and Rhino celebrated, until Scott D’Amore and building security chased Heath away.

EC3 sent a video to Moose saying that he was holding the TNA World Heavyweight Championship hostage, and if Moose didn’t find him, he would send it back in pieces. Moose went on the hunt for the belt, but got pointed in the wrong direction by an apparent EC3 stooge.

Backstage, the Good Brothers were telling road stories for a bunch of the security guys. The Rascalz wandered into the room but didn’t have time to hear the stories, as they had to prepare for their match with Ace Austin and Mad Man Fulton.

Bravo was nervous about having to ref the match, but still wasn’t desperate enough to take advice from Johnny Swinger. Meanwhile, the Deaners accused Larry D of stealing their beer the other week. Larry D didn’t take to kindly to the accusation, and the teams started brawling. They fought their way around the house, and there were a lot of clever gags and callbacks to segments from earlier weeks. Not including Johnny Swinger, this was the funniest Wrestle House segment of them all – a true highlight.

Match 3: Ace Austin and Mad Man Fulton vs. the Rascalz (Wentz and Dez)

The Rascalz used some quick double-team speediness to try to combat the size and power of Fulton, but it didn’t work out so well for them. He simply overwhelmed both of them, with Austin coming in to deliver the occasional cheap shot. But the scrappy Rascalz wouldn’t just lie down, and after some rapid dives, they finally put Fulton down. With him dispatched, it wasn’t too long before they were able to get the pin on Austin.

After the match, the Motor City Machine Guns came out and offered the Rascalz a match next week for the Tag Team Championship. Before the Rascalz could answer, Austin and Fulton attacked them from behind. The Guns ran into the ring to make the save, and the Rascalz and Guns raised each other’s arms in a show of mutual respect.

Backstage, Deonna Purrozza was irritated by the lack of black tie attire of many of the roster. She ran into Kimber Lee and invited her to attend her celebration, in part to back her up in case Jordynne Grace crashed the party. Moose walked up to them and asked if they had seen EC3, but they hadn’t.

TJP barged into Rohit Raju’s dressing room and demanded a title shot. Raju said that Christopher Bey was still due for a rematch, but if TJP could take Bey out, then Bey could take his place at the front of the line.

The two of them trash-talked one another before things got physical. Taya hit a huge headkick that downed Rosemary in the corner, and she followed that up with a double knee smash. Rosemary found her fire, and mounted a comeback with a huge spear, but then ate one herself. They each kicked each other in the head and both went down. Taya avoided a charge in the corner and Rosemary bashed her head on the post. Then Taya hit her Valkyrie Bomb for the pin.

After the match, Bravo tried to console Rosemary, but she wasn’t having any of it. With her quest for Bravo’s heart over, she told everyone that there was nothing further to be done here. But Bravo disagreed, saying that there was indeed one more thing to do: he proposed to Rosemary. He said that Taya’s winning the match meant he would still be her manager, but that nothing was going to make him give up his feelings for Rosemary. Taya realized that the heart wants what the heart wants, and said she’d have no problem with it. Rosemary accepted Bravo’s proposal, and everyone celebrated the happy occasion. 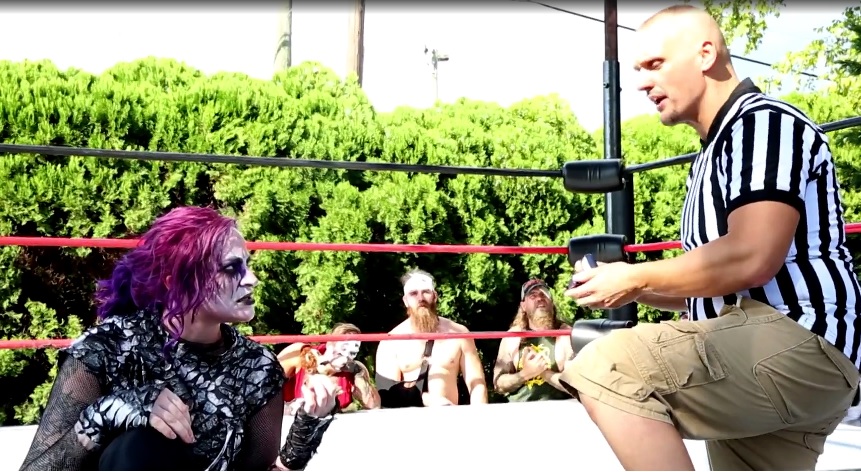 And with that, everyone was released back to the Impact Zone.

Oh, and the mystery of the Deaners’ missing beer was solved when Crazzy Steve admitted that he was the culprit – but it was an accident; being blind, he couldn’t read the label, so didn’t know it was theirs.

Kimber Lee acted as the emcee for the event that saw many of the other roster members surround the ring decked out in formal attire. Purrazzo came to the ring in a fancy black dress. Her speech pretty much consisted of her insulting the rest of the roster and boasting about her beating Jordynne Grace at Slammiversary and then again in last week’s Iron Man match. This brought out Grace who came to the ring. She told Purrozza that she was going to regain the title when she next had a chance. This brought out Tenille Dashwood who made her return to Impact and said that she was there to capture the gold and that Purrazzo wouldn’t find her as easy an opponent as Grace was. This predictably angered Grace, and she chased away Dashwood.

Suddenly, the Wrestle House crew magically teleported into the ring. After a bit of a brawl, Purrazzo and Lee bailed while Susie and Kylie Rae – who actually is the number one contender for Purrazzo’s title, having won that honour before she was sent to Wrestle House – stood tall.

Brian Myers was interviewed and said that next week, he was going to confront Willie Mack. Moose interrupted to ask Myers if he knew where EC3 was, and Myers told him he’d seen him in the locker room.

Edwards went on the offensive right at the bell, and threw Young around like a sack of potatoes in the opening moments. But the maniacal Young used some sneaky tactics to snap Eddie’s neck on the top rope to take control. But only temporarily, as Eddie was in a fighting mood and he battered Young both inside and out of the ring. But Young cooled Eddie down with a big standing neckbreaker on the apron, and then he continued to punish Eddie’s neck and back. A couple of huge short forearms rocked Eddie, but he hit a desperation Blue Thunder Bomb to buy himself some time. He then hit a hard Backpack Stunner that flattened Young. He was looking for a Superplex, but Eric pushed him to the mat, and hit a flying elbow for a very close 2-count. Eddie powered out, and sent EY to the floor. But when he followed that up with a diving attack, Eddie tweaked his knee on a hard landing. And then he did it again with the same result, which had him clutching his knee and screaming in pain. When the ref checked on Edwards, Eric took the opportunity to grab the championship belt to use as a weapon. The ref took it away but as he was disposing of it, Eric grabbed his hockey helmet and corked Eddie in the head, staggering the champ. A Piledriver later, and the three-count was purely academic.

After the match, Young attacked Eddie, delivering more punishment to his knee before security chased him away.

Instead of ending on the title change, the show then cut to a final vignette for some reason. Moose barged into EC3’s locker room and found a corkboard on the wall covered with pictures of Moose like one of those scenes from a horror movie where the psycho killer, or the cop obsessed with finding him, has one of these boards up with pictures of his prey. Moose was spooked, and even more so by the ominous note left to him saying “You have been warned,” a close-up of which was the final image of the show.

All of the matches were fine tonight, but it’s the return of Eric Young to the championship spot that made this episode a launchpad for good things to come. Wrestle House peaked at the right moment, capping off that storyline with a cinematic brawl that was a true highlight. The return of that crew to the main roster should help shake things up even more.