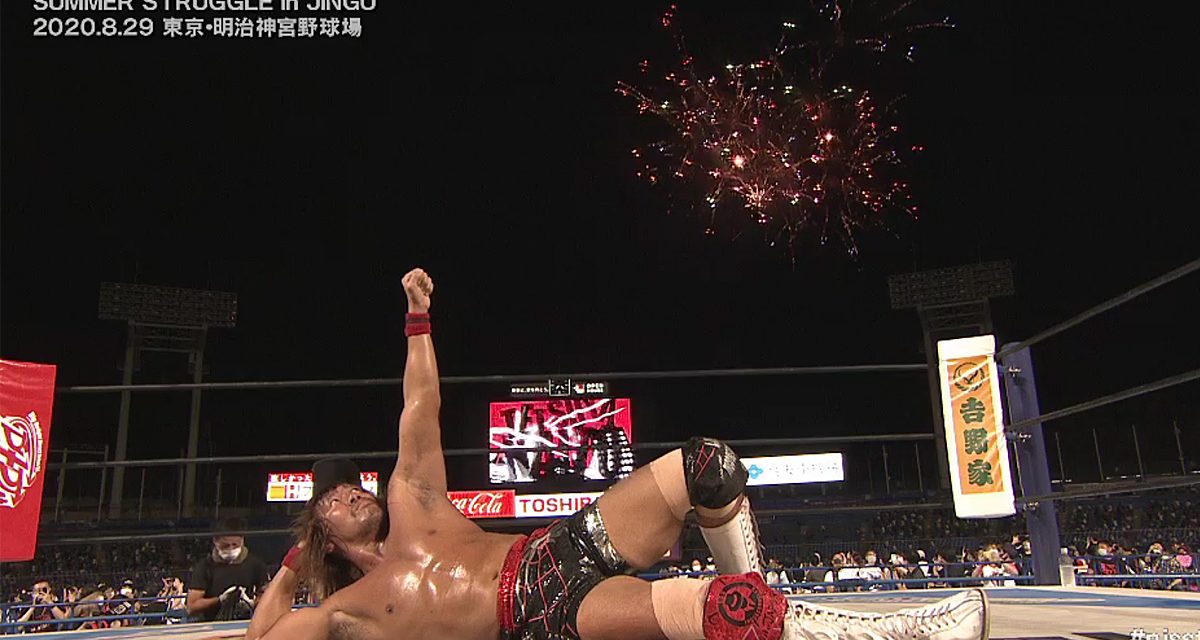 And that’s how you end a wrestling tour. NJPW brought its Summer Struggle tour to a stunning conclusion by hosting the final event in the outdoor Meiji Jingu Stadium. The stadium is home of the Tokyo Yakult Swallows.

There is just something about holding a wrestling event in an open-air stadium that just enhances the spectacle. Having live fans in attendance doesn’t hurt either.

With the event having three of the best matches of this year it is no wonder that Summer Struggle in Jingu is unquestionably the best event held so far in 2020 if one discounts NJPW’s Wrestle Kingdom in January.

The leader of Los Ingobernables de Japon, Tetsuya Naito, finally dealt out some payback to betrayer double champion, Evil. Naito defeated him to reclaim the IWGP Heavyweight and IWGP Intercontinental championships from Evil and Bullet Club.

As the sun set on the stadium Dick Togo was by Evil’s side as he hit the ring.

Togo attacked Naito as he was removing his entrance gear. Naito kicked him in the gut and threw him out of the ring. That gave Evil the opportunity to hit Naito with the IWGP Heavyweight in the head before the match even started.

Evil smiled at the camera while he continued to abuse Naito on the floor. Togo distracted Red Shoes so that Evil could hit Naito with his trademark solo Conchairto.

It was time for Evil to get Red Shoes attention next so that Togo could choke Naito out on the floor. Evil tore off a turnbuckle pad whipping Naito into the exposed steel twice.

The crowd boos Togo severely as he trips Naito from outside the ring. A fed up Naito shotgun drop kicks Togo in the face sending him flying into the ringside barrier.

Togo is up on the apron again but this time he has a steel chair in his hands. Red Shoes chews him out. Why someone from LIJ doesn’t come down to take Goto out of the equation is unknown especially Sanada who should have been perfectly rested from his match earlier in the evening.

Naito blocks Evil’s attempt at Darkness Falls on the edge of the ring. Naito clobbers Evil with a neckbreaker off the apron onto the stadium floor below. Naito kicked Evil in the head taunting him to stand up. Evil turns things around by hurling Naito into the exposed steel once again. 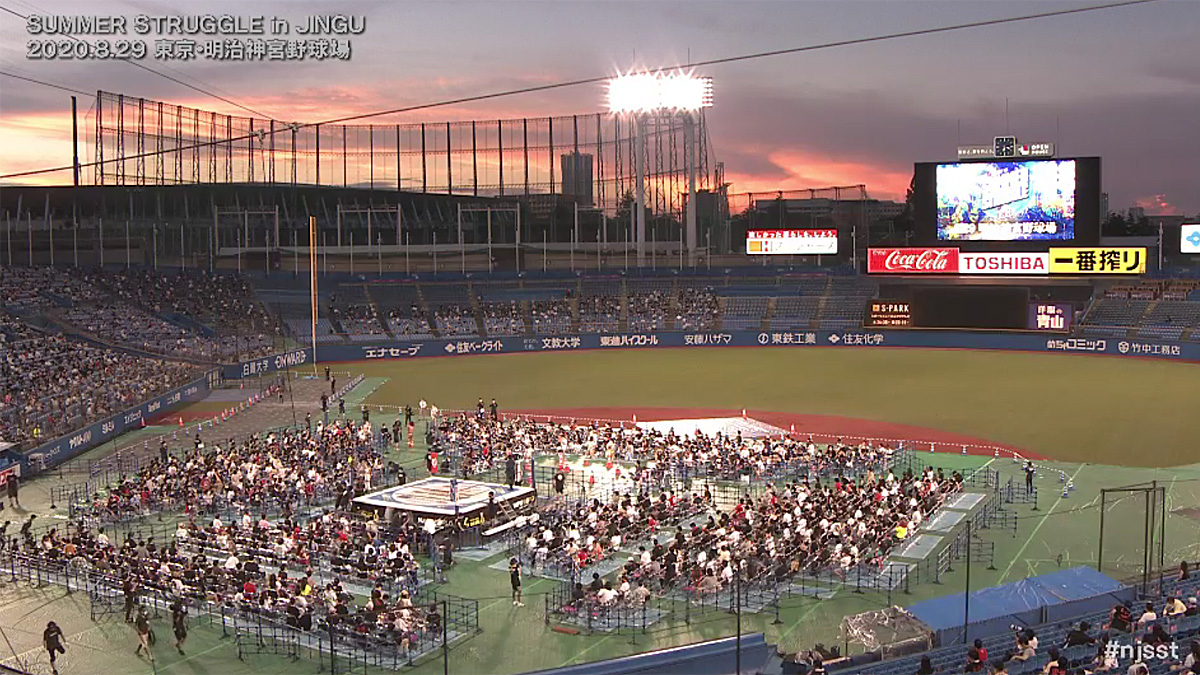 Evil Superplexes Naito from the top rope for a two count. A few seconds later, Naito just barely kicked out of Darkness Falls.

Naito shrugs off hitting the exposed buckle again and DDTs Evil off the ropes. Naito followed up that with Gloria, another move meant to injure Evil’s neck. Evil purposely runs into Red Shoes so that Togo can whack Naito in the back with a steel chair from the floor. Naito counters Everything is Evil raining elbows down on the champion’s neck.

Togo leaps onto the apron just in time for Naito to sling Evil into him. Evil blatantly and openly hits Red Shoes. Red Shoes rolls out to the floor. Togo enters the ring lowering the boom on Naito. The crowd goes mental.

Togo and Evil hit the Magic Killer on Naito. The crowd loses it.

Finally, someone from LIJ enters the fray. Bushi drop kicks Evil and punches Togo off the apron to the floor. Gedo decides he wants some so he leaps into the ring.

“What are you doing?” yells Gedo punching Bushi and swinging him into the steel barricade. 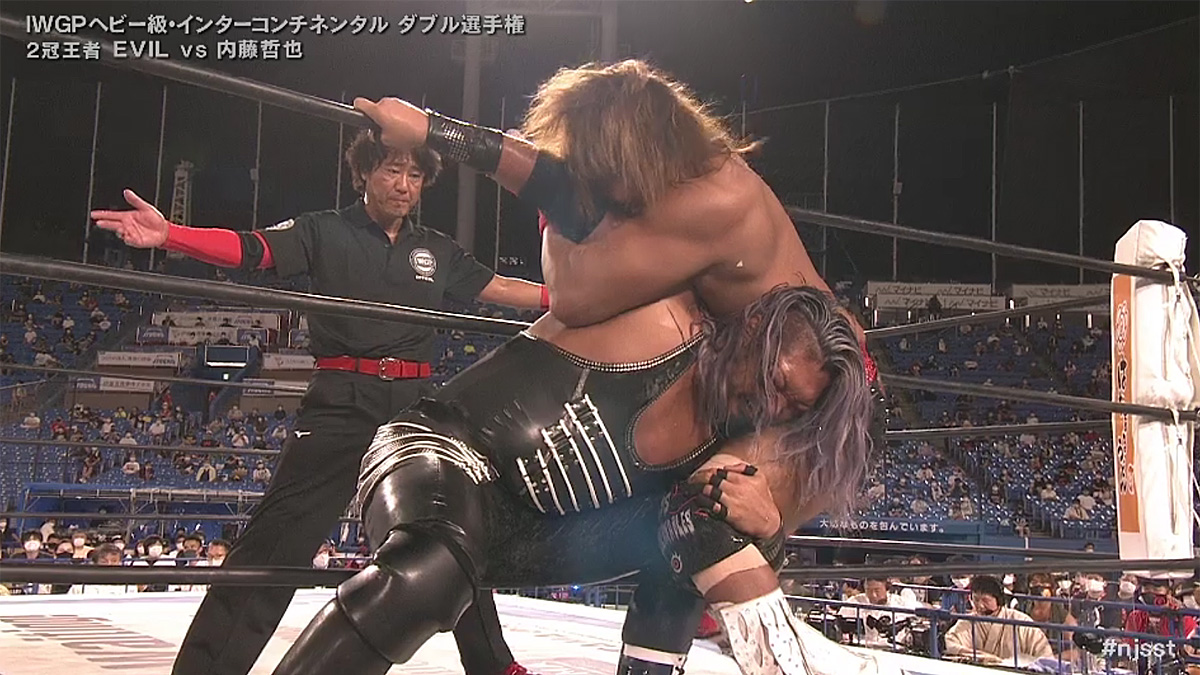 Naito blocks Evil’s chair shot but he doesn’t see Togo lurking behind him with his garrote. Naito gets his hands in the way so it doesn’t slip around his throat that is until Evil kicks him in the gut.

Naito’s Destino is halted when Evil hits the official again and kicks Naito in the “lower abdomen”. Naito kicks out of Evil’s lariat. 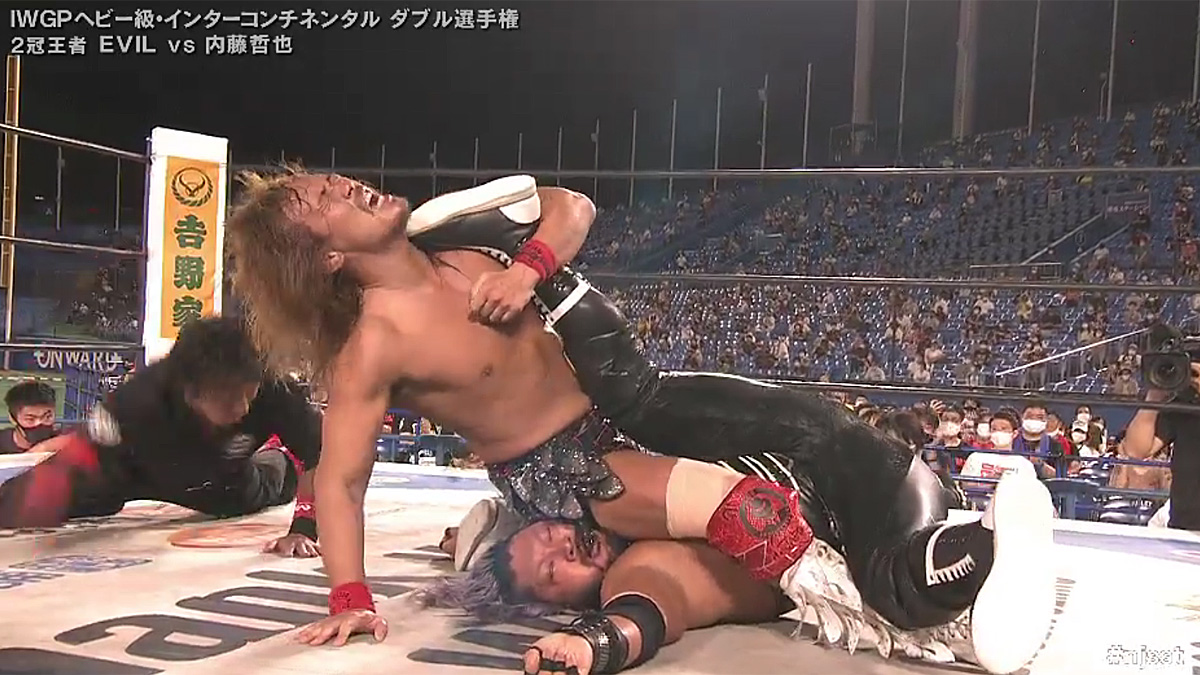 After failing to hit it properly the first time, Naito lands Valenti and Destino to win back both championships.

To close out the show Naito strikes his signature pose while fireworks go off above the stadium. 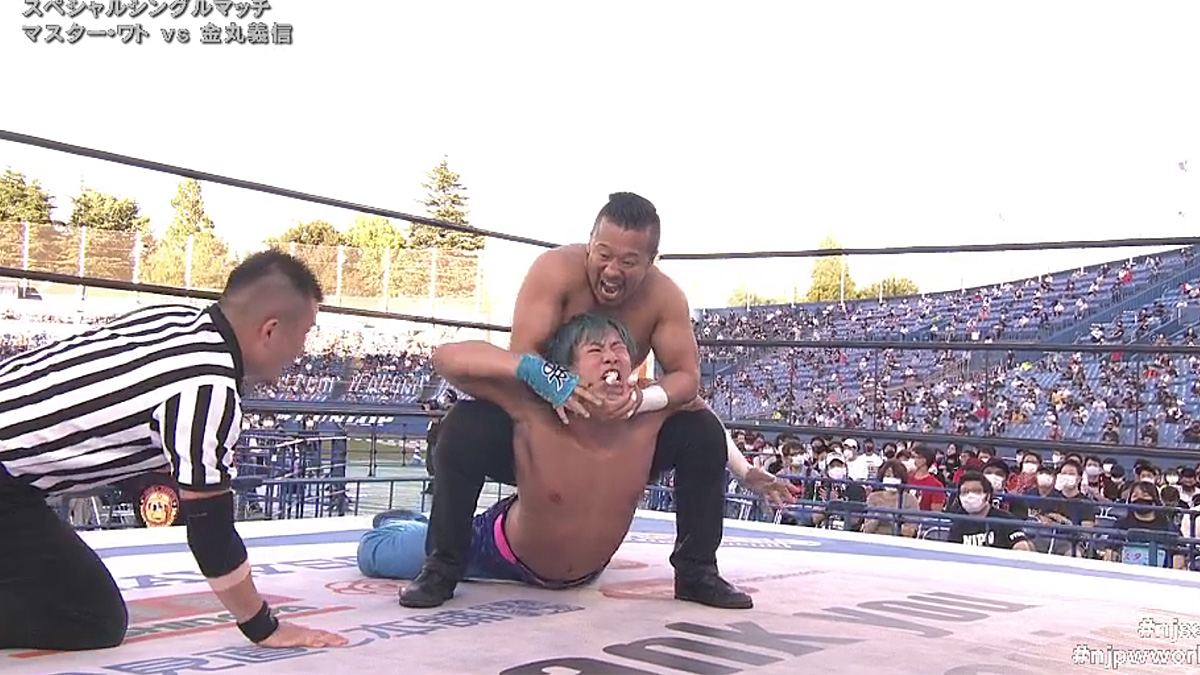 Hiroyoshi Tenzan is at ringside to support Wato. Wato and Kanemaru have had their issues recently. Kanemaru doesn’t appreciate Wato calling himself “Master”. This was the time to settle things. Wato starts out quickly taking down Kanemaru with a flurry of chops and kicks. Kanemaru drop kicks Wato as he leaps off the ropes. A leg drop over the railing from Kanemaru slows down Wato.

Kanemaru pushes the official into Wato. Kanemaru grabs his whiskey bottle but Wato kicks it out of his hands. Wato botches a few moves on the way to the finish in which Kanemaru counters a face buster, rolling Wato up. 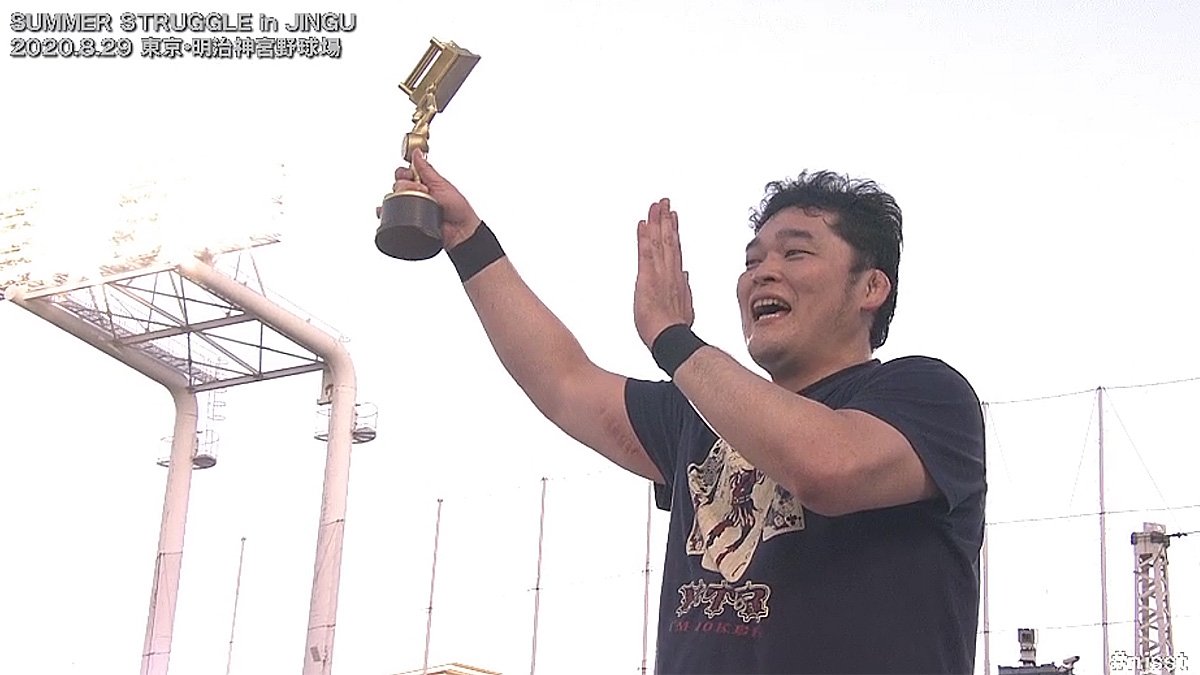 Yano is surprised by the pyro and smoke as he enters the arena. He sprays everyone and everything with his disinfectant.

Sanada and El Desperado attack Yano immediately as Okada is still making his entrance. Yano sneaks up on Okada trying to roll him up proving that it is every wrestler for themselves.

Yano catapults Sanada into an exposed turnbuckle. Yano pushes Okada off Sanada attempting to steal the pinfall from him.

Sanada puts Yano in a Paradise Lock leaving him in a corner as the action continues. Yano occasionally cries out. The crowd laughs.

Okada puts Desperado in the Cobra Clutch. Desperado counters it by grabbing the official by the throat. Yano appears out of nowhere punching Okada in the “lower abdomen”, rolling up Okada for the victory ending the match in a hurry. Yano begs the Okada for forgiveness. Yano disinfects his trophy. 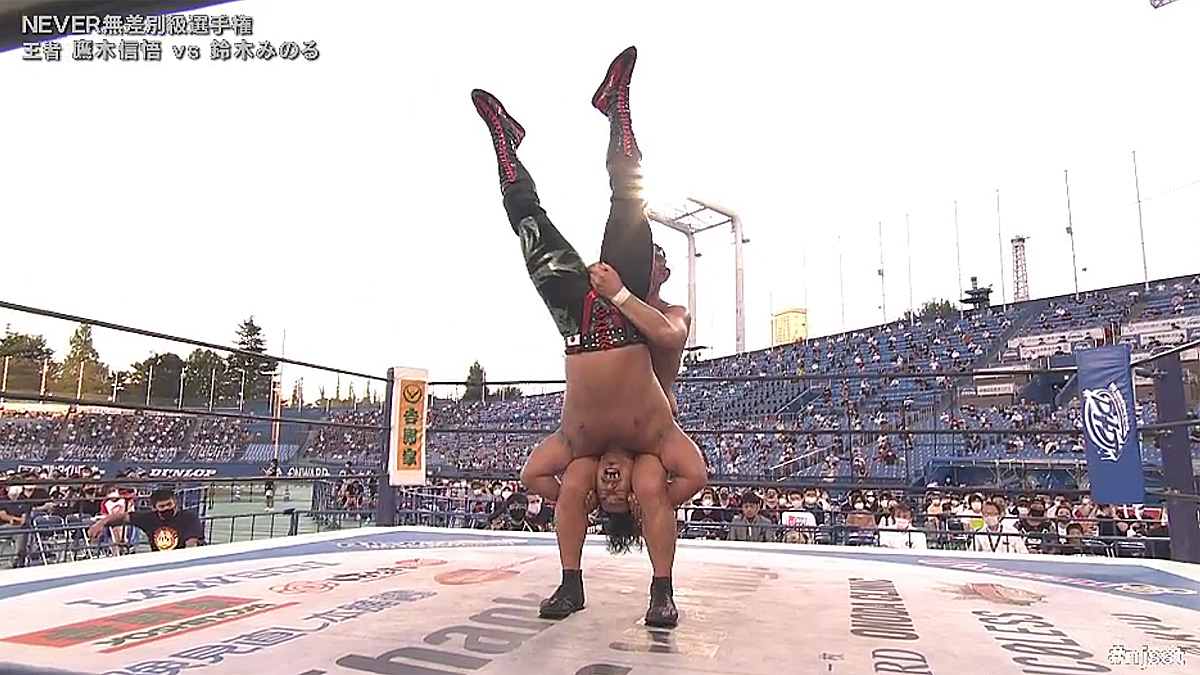 Both men prove why they are two of the best brawlers and bulls in wrestling today. Lots of pushing and shoving before the bell rings. When it does, they begin wailing on each other in the middle of the ring. Shingo suplexes Suzuki. Suzuki scrambles to the floor.

Shingo whips Suzuki into the steel barricade then pounds away on him while he stands against a ring post. Suzuki knocks Shingo off the apron. Shingo crashes into the barrier below.

Suzuki beats Shingo against the ringside barrier while the official demands the match return to the ring.

Back in the ring, Suzuki labels Shingo’s chest with kick after kick. Shingo jeers Suzuki. He wants to be hit harder.

Shingo flips a Gotch Style Piledriver from Suzuki into a Death Valley Driver. A Pumping Bomber gets Shingo a two count. Suzuki also kicks out of Made in Japan shocking fans and Shingo.

A series of nasty head butts drop Shingo to the mat. Shingo stands only to receive a series of rapid-fire strikes from Suzuki.

Shingo and Suzuki trade forearm shots and head butts until Shingo stumbles into a sleeper.

Pointing up to the heavens and his mentor Karl Gotch, Suzuki spikes and pins Shingo with the Gotch Style Piledriver. 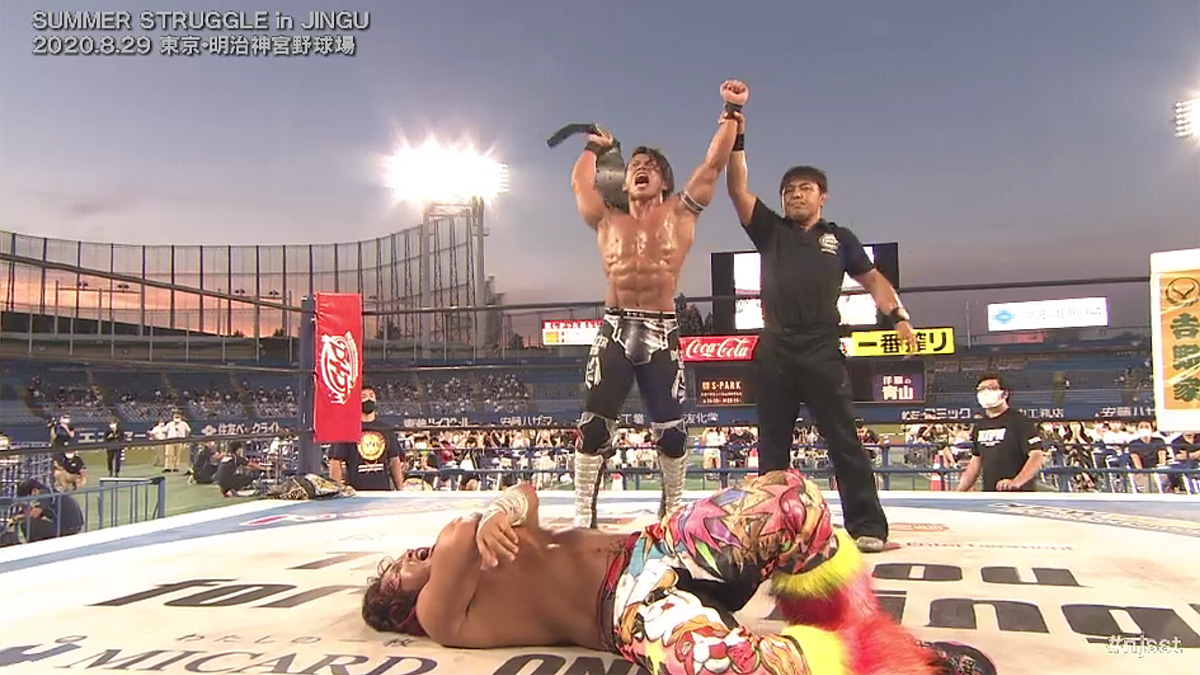 Ishimori has the gold. Courtesy: NJPW.

Hiromu’s shoulder is taped up evidently still injured. The back and forth action is too quick to call as both men start the bout with a breakneck pace. Ishimori just slams Hiromu’s shoulder to the mat. Hiromu rolls out of the ring immediately.

Hiromu leans against the announce desk doubled over in pain. Ishimori moonnsalts from the second rope to the floor flattening Hiromu.

Ishimori splashes the arm and wraps Hiromu into a Yes Lock. Luckily for Hiromu Ishimori’s positioning is poor and he can reach the ropes.

Hiromu looks to sunset bomb Ishimori off the apron. Ishimori flips backwards and out of danger landing on his feet. He rams Hiromu’s shoulder into the steel post.

Hiromu roars as he rips the tape off his shoulder, runs across the apron and shotgun drop kicks Ishimori into the ringside barricade.

Hiromu sends Ishimori head over heels with a lariat but he is so worn out he cannot make the cover. Hiromu gets to his feet holding his shoulder.

DDT in the corner and a Time Bomb has Hiromu pounding the canvas after only getting a two count on Ishimori.

Ishimori nails Hiromu with a reverse Bloody Cross and makes him submit to the Yes Lock.

About as perfect as an event can get. Serving up a number of Match of the Year candidates and the setting of an open-air stadium made this an unforgettable event leading into the G1 Climax tournament next month.