Documentary ‘Nail in the Coffin: The Fall and Rise of Vampiro’ takes viewers on a fantastic ride 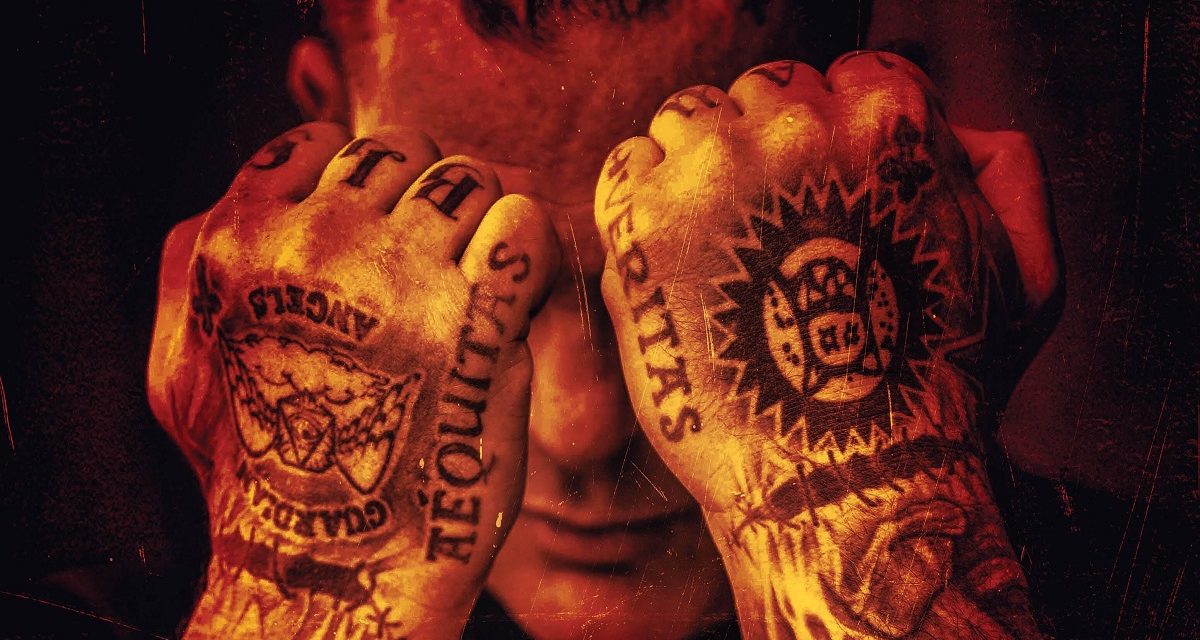 With the powerful combination of filmmakers seemingly unafraid to insert the camera into any situation, private or professional, and a subject equally willing to open doors and bare his innermost dreams and fears, Nail in the Coffin: The Fall and Rise of Vampiro, from Michael Paszt of Raven Banner Entertainment, is a tremendous documentary. Ian Hodgkinson of Thunder Bay, Ontario, who grew up to become El Vampiro Canadiense inside the wrestling ring, looks back upon his career and his life, always with an eye to the future, in what would be called a riveting performance were this a fictional story.

With professional wrestling, whether inside or outside of the ring, one never can tell for sure what’s authentic and what isn’t. What makes watching Hodgkinson’s journey all the more engrossing is how real it all feels.

The film cold opens behind-the-scenes at Triplemania XXV, a 2017 tentpole show for Lucha Libre AAA Worldwide. At the time, Hodgkinson was Director of Talent for AAA, but as the film shows, he wore many hats and we watch him barking technical production orders while preparing to get into the ring for a stand-off with Johnny Mundo (John Morrison). We are seeing Vampiro at the very tail end of his in-ring career, one which Hodgkinson describes with a combination of self-deprecation and self-awareness as he claims to have been a “a terrible wrestler”, but one with “presence.”

We are presented with little snippets from others (such as Jeff Jarrett and Chavo Guererro, Jr.) who more or less concur, but perhaps more diplomatically. Charisma, the ability to connect with the audience, women loving him and the character — these are the ways that others explain how Vampiro became a fixture in Mexican lucha libre.

Unofficially, the film is broken up into chapters. First we continue to watch Hodkginson work behind the scenes for AAA and we are introduced to his daughter Dasha as she calls him during a  meeting. Explaining that he has to take her call, the scene introduces a story thread that will continue throughout the whole film: Hodgkinson’s duty and love of being a father is in constant conflict with Vampiro’s duty and love of wrestling. He is visibly strained while talking to Dasha on the phone. Overwhelmed and stressed, there’s a rushed and abrupt ending to the conversation. 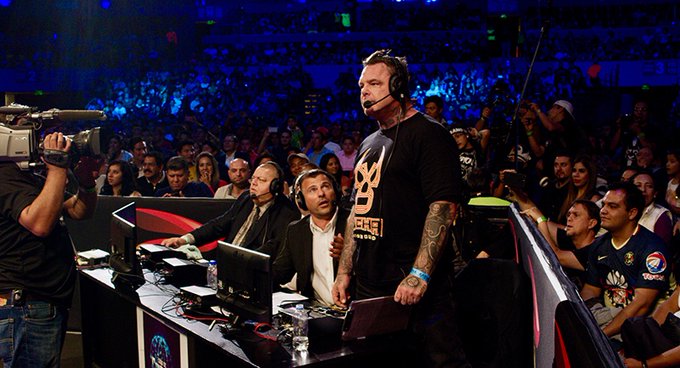 Hodgkinson reflects on this current phase in his career, answering the question often put to him: doesn’t he want get back in the ring? “Of course I do,” he offers. However, as he lists the responsibilities he has of talking to the referee, listening to the announcers, in effect overseeing the whole show, he says he’s in the ring now more than ever. Since this particular night turns out to be no ordinary show, we are witness to Hodgkinson playing peacemaker as Paszt’s crew gets a favour from the documentary gods for being backstage that night.

With Reina de Reinas women’s champion Sexy Star injuring Rosemary with a shoot armbar, as well as Jeff Jarrett appearing to be in no condition for his performance that night, Hodgkinson has plenty to deal with.

The camera crew captures only reactions to the events with Sexy Star and Rosemary, but they are right in the thick of things as Hodgkinson blocks Jarrett from getting physical with La Parka, Bengala, and Argenis, all with Killer Kross (now NXT’s Karrion Kross) lurking on the sidelines and looking ready to step in if needed. As a backdrop to all of this, Hodgkinson says that Jarrett was to blame for him not becoming as big a star as he could have when he came to WCW in the late 1990s, and he’s not the only person that he pegs this on in the documentary. Hodgkinson also feels Jarrett suffers from the greatest sin in wrestling which is believing one’s own hype. With the dust settled, Hodgkinson makes the rounds and checks if everyone is all right, apologizing for the actions of others in a way that shows the strength of his position in the company.

All this, and he’s still trying to get back in touch with Dasha and continue the conversation from earlier. This brings us to chapter two: Hodgkinson the father.

“I want go home. I want to have ice cream. I want to play PlayStation with my daughter. I will put my daughter before anybody.” With talk like this, the film shows Hodgkinson at tremendous odds with what he does to make a living and how to forge a greater connection with his daughter. His desire to be there for her whenever he can (when she’s not with her mother, his ex-wife Kitsu) is often blocked by his inability and unwillingness to make a living outside of wrestling. Time and time again he states that he wishes he could get out of the business, yet time and time again he states his innate love for what he does.

It’s not the only time in the film that there truly seems to be a distinction between the life of Ian Hodgkinson and the life of Vampiro. Ultimately, he seems to be in love with each life to such a degree that they both press on him to give up the other. 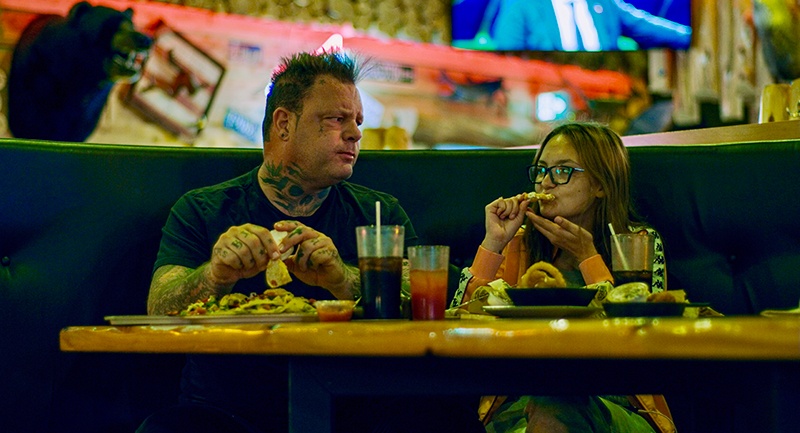 Dasha, for her part, is also very open to discussing what it has been like to move in with her father at the age of 15, when she didn’t “really trust him.” She remembers having good times seeing him when she was younger (old videos show Hodgkinson at her gymnastic practices and at the pool, so he’s always had a presence in her life), but that this is now the first time she’s really connecting with him. She sees that he’s trying to learn how to be a parent, all while she is trying to learn about him. The film returns several times to a diner where father and daughter share their feelings, each perhaps surprised by the depth of insight that the other one has to offer.

She puts it to him simply, asking why go back to wrestling if he doesn’t like it? In truth, he never really answers the question.

The film moves into the third chapter, looking at how Hodgkinson transformed from a young kid, feeling lost, to Vampiro Canadiense. He was a hockey protégé — how classically Canadian — but always getting into fights. He provides sparse details on how an attempt to join the church community led to a sexual assault, something which he never felt that he could tell anybody. He found his way into drugs, The Sex Pistols, and watching AWA wrestling. 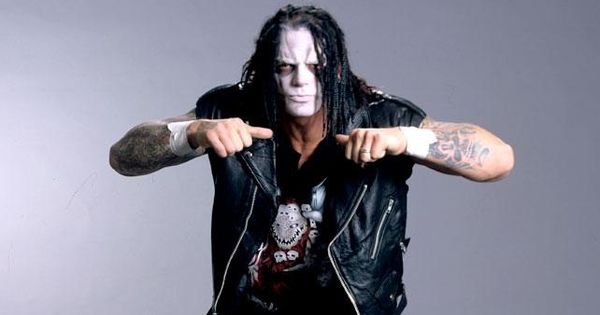 Vampiro was born, according to Hodgkinson, in 1984 when he saw The Road Warriors on TV, as that was a perfect mix of punk rock and sports. His story from there is legendary, if not legend. He made his way to Montréal to find training with International Wrestling (and moonlighting as a collector for the Mafia), then to Los Angeles where he said everywhere he looked were pale, vampire-looking teens. After working as a bodyguard for Milli Vanilli, he stole everything about Vampiro’s look from the disgraced lip-synching duo. What better way for someone to enter the world of pro wrestling than with inspiration from a tandem who weren’t quite who they seemed to be?

Finally finding his way to Mexico, Vampiro was getting booked for up to seven shows a day, racking up injuries and working through them. He claims that he made such a splash that Konnan resented his immediate popularity, to the point that Konnan also stymied his progress in WCW once he joined the company. He describes further injuries, specifically breaking his neck while taking an avalanche powerbomb from Mike Awesome in WCW. In those times, he continually faces the battle in his heart about needing to work and not knowing what else to do but get back in the ring as quickly as he could.

In a moment of near-dual personality, Hodgkinson says he’s not proud of how he has used Vampiro to make a living.

The final chapter of the film is a return to the present and his search to be the father he desires to be. Moving back to Thunder Bay with Dasha for the purpose of living a more normal life, Hodgkinson nonetheless travels non-stop for work. Matt Striker, a co-commentator with Hodgkinson for Lucha Underground, tells him to his face that he’s a great father, but Ian simply hangs his head and refuses to acknowledge it. He hobbles down two steps from a restaurant into a parking lot; he wobbles side to side as he walks the pathway to his home. He lists off concussions and chronic arthritis among other injuries. Both his doctor and Dasha see trouble ahead. “It’s a matter of time,” his daughter says, losing her composure.

He wants to give it up, yet he still needs to know if he can put on a good match one more time. A post-film coda offers the news that he has been diagnosed with early onset Alzheimer’s, and not long after the film’s completion he finally announced his in-ring retirement via Twitter. The decision may have been made for him.

The ending is somewhat abrupt, but perhaps that’s the way it would always feel for someone who doesn’t seem to really want to quit. Still, it would seem that Vampiro’s pull on Ian Hodgkinson has perhaps finally lost its power, and one hopes that the part of him that yearned for freedom from the life he loved is content, at peace, and feels whole.

Nail in the Coffin: The Fall and Rise of Vampiro will have a limited theatrical run on September 4th, followed by an On Demand & digital release on September 8th.

Note: SlamWrestling.net will feature an interview with both Hodgkinson and director Michael Paszt next week.